3rd race in the Runfurther series this year and the 41st Hike for the organisers.After the birthday special last year the Hike has now reverted to its traditional 3 year cycle. for 2019 this meant a route similar to the last cycle but in reverse and with a few relatively minor changes. For veterans this was a huge advantage as we knew many of the paths and what we consider to be optimum routes. Could we find our way without running backwards to check the views? Would the minor variations and changes to a  couple of CPs lead to any new lines being run?
Interestingly the Hike had 78 runners on the long course and well over 30 were Runfurther members- they need our support, although there were some others on Long Walk and Short run and walk. It of course also meant that I knew loads of people today. Some were local like Elise and the Scarfes but others had travelled some distance. For Alwyn it was his first visit to the area and he was mighty relieved to find it should be the same route for the next two years so he could put his new knowledge to good use and improve on his time. He was not alone in this.
The forecast was good and we have had barely any significant rain so the ground would be as a dry as it is ever going to get over the whole area.
The forecast might be good as in dry but it was a very frosty start when we moved the van at 5.30am and started putting up flags and banners. Even by 7am when the long walkers set off it was very chilly. The sun was up before our 9am start but once exposed to the biting easterly wind it was cold.
The crazy early start meant I had masses of time to chat with friends, hand out spot prizes, catch up with people due 'rewards' from last years races and discuss the best route options for several sections of the course. We all have our favourites and stick to some of these regardless. I always opt to climb from Coolam and go via the turbines as I dislike the steep tarmac of the drop to the NE. The run along the canal is possibly slightly quicker but for me it is less inspiring.
I knew to start slowly as this had worked well for me in LM42. Fortunately the gradual road and track climb to Nab End made this easy and I was happy to let Ian C and Ed G go. Sabrina was off chasing the lead men- Rory, Kevin and David but struggled to hold onto their pace. She had never been to the area and was trying to navigate using the 'suggested route' on a rather fuzzy print out and not an ideal scale. From Nab End I suddenly changed my mind. I didn't revert to the old climb as the sunken lane is not nice but neither did I do the lanes I had receed down to Mytholmroyd. I opted for a middle way and once down at the Mill with Ice Cream vans in Cragg Vale I started to climb Hoo Hole. I knew Ian had followed me but when I glanced round I found so had about 9 others. I hoped I could remember the way. It worked and part way up we dinked right to Daisy Bank and then the contouring track to London Road. It was the correct choice as approaching Errington Grange we spotted Sabrina and a small group still climbing from the valley floor. I knew I couldn't keep up so tried my best to give instructions.
It was nice to look up to Stoodley Pike but not have to climb the moor and even nice to look across to Heptonstall but know we wouldn't drop to Hebden for the monster climb. I caught Sabs again at Lumbutts church and was able to guide he through the slightly confusing paths before the drop to the valley. Even there I was close enough to shout instructions at the car wash and then again as we climbing to the church and you appear to go through private garden and up some not very obvious steps.  Here I passed my name sake doing the Long Walk (yep another Karen Nash also born on 29.5.1961! what are the chances?)Then inevitably Sabs pulled away but was still in sight. By now the same runners were around me- sometimes ahead and sometimes behind. I was lucky to know the way and to the bemusement of at least 4 men kept ending up ahead of them.
The path below Bridestones was as dry as it is ever going to be and it was a joy to run along the worn flagstones and along to the Mount Cross CP.
One way I seem to gain minutes here and there is barely stopping at CPs so a group of us set off racing down the tarmac to Cornholme. I used my local knowledge and switched to the footpaths but there was nothing in it. Climbing up Flower Scar was a different matter though. The suggested route avoided the mountain bike woods but went across the fellside to the old chimney. Ed and I knew to stick to the lane for as long as possible. I could see Sabs flogging up through tussocks and a group of 5 men that had been ahead of me. I beat them all to the road side CP of Horden Stoops. Sadly they then showed their better fitness and ran off on the track heading for Trough End. 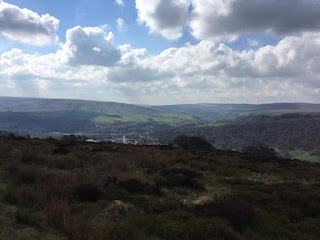 I had been taking my mind off the growing pain in my foot by doing maths. If I run twice as fast as Bob but he has a two hour head start when and where would I overtake him? I guessed around 4 hours in and I was spot on 4hrs 4 mins just before the trig point. Climbing up the Bridestones Moor had got me warm and I had shed layers but now I was freezing. I shot off down to Coolam wondering if the CP would be in the published place this year. It was and Linden greeted me cheerfully. From here there is a big route choice and I learned that about 1/3 had opted for NE and then the canal. Ah well, not me despite the cold up here.
I chased Ian up to the turbines. I was concerned to see Simon head off towards Littleborough but he was too far away to shout in the fierce wind. Despite the gradual climb I reeled in a few runners and we arrived at Turbine 9 together.
The cairn was missing but I knew the trods and was soon dropping to Sladen Fold. Ian confessed here that he had set off too fast and was now struggling. The suggested route from the canal is confusing so I stuck to the 'reverse' of what I knew from the White House. I was not surprised to see faster runners dotted around in surrounding fields. 'Cap man' was one and we played leap from from here all the way to the end. 'Headband man' was another and he opted to use my knowledge to climb to the CP. It was very cold here and the marshalls were offering hot tea. I peered into the tent to see another runner who had over cooked the start and was now struggling. Ah well. Most runners seemed to go up and over Blackstone Edge, which might not have been so bad since it was so dry. I stuck to the wide grassy path by the goyt and nipped over the end of the ridge to join the main path. Again I gained some time and places. Windy Hill was aptly named today and not a place to loiter. I don't like running along the main road and across the motorway slip roads but even with dry ground it proved faster and I overtook Cap man again. It didn't last long and he soon shot off along the track and up onto the ridge leading to Pike End. I ate my marmite sandwiches on this section and although it slowed me a little it was worth the energy I gained. I passed Dick on his Short run and also lots of walkers.  The ridge was longer than I remembered but I found the path by the cottage and was soon heading for the CP by the dam. After this the next CP was very close, just before we met the main Ripponden Road. I saved headband man from another error. 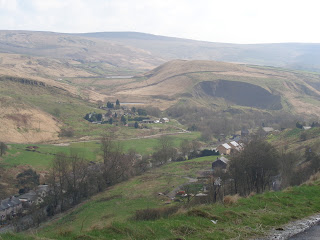 The next section along the valley was quite nice but the climb then up to the final CP at the Moorcok Inn by Norden Moor was a struggle.I opted for the road which was 'easy' and would have been OK if I had the energy to run it all. Sabs went by the fields and said it was awful. I had forgotten my garmin but was asking runners how many miles we had done. By Ripponden I knew sub 7 hours was possible. From the pub it was a steep drop to the mills and then what seemed like a monster climb up steps and a steep slope all the way to the cricket ground. I scraped in at 6 hours 57. I was pleased with that despite the amount I had walked. Sabs was first woman in 6 hours 24 and would have been much faster if she had known the best routes. I am pleased she is hoping to do four Runfurther races and we will have a young fast woman winner this year.
Rory had won in I think 5hours 9 mins and Kevin was about 10 mins behind this and then David.  Nick arrived just over an hour after me and was very pleased with his run.
It's a lovely venue to socialise in after your run and I spent a long time eating and drinking before our meeting and then taking all the flags and banners down. The spot prizes from our sponsors went down a treat with lots of happy winners so thank you Mountain Fuel, Tent Meals, Injinji, Ultimate Direction and Romneys.