A new race for Runfurther and it was great. We were happy to help Jamie and Clare with their local race for charity. It's in the third year now and slowly gaining popularity. At 32 miles with about 4600ft climb it was very runnable- Not my forte, with no big hills to stomp up and some long disused railway lines towards the end which to me felt like torture. Brilliantly organised, marshalled and huge plate of chilli at the end.
It was to be a special race for me as it would ultra race 100. I have only counted races with results and only those over 30 miles. I now have a total of 5256 miles with the shortest being 30 miles and the longest being 200. It includes 11 races of over 100 miles and an average distance of 52.6 miles. All in the last decade (almost: started March 2009, completed May 2019).
By Friday I was stressing that I would not find the way etc. I was anxious about needing to slow down enough to read and act on all the instructions etc. I have only been to Chesterfield before, some time in the late 90s when they made it to an FA Cup final and festooned the town in blue and white. I had studied the text and map but was worried about needing to slow down enough to read and act on all the instructions and the time lost if I went off route. 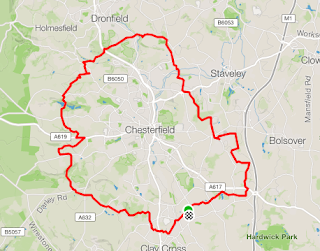 Bob and I drove down after a morning of indoor climbing. The weather was foul through the Peaks and drains were struggling to cope with the water. By the time we got near Chesterfield it had improved and we went for a short walk on a loop of the course near Holymoorside. It was enough to persuade me that I would need shoes with some grip and also that the text route description seemed pretty good. Jamie had suggested that a dead end lane in Heath would be better than a night by the start so that was our next stop. Again we walked a short loop before we settled down to an evening in the van. I didn't sleep well and Jamie had not realised that the church bells chimed every hour through the night. At least it wasn't every 1/4 hour. 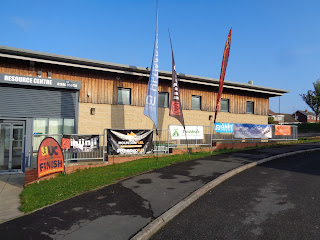 It didn't take long to move to the start in the morning and the weather looked so much better. The flags and banners were soon up and we could concentrate on registration and kit checks.
For a small race with an entry of fewer than 70 Runfurther had brought a fair number.... Dick, Bob, Nick, Kevin, Sarah S, Sarah and Ian, Matt, Sam,Steve, Daryl, Debbie, Martin, Stephen and Tim. 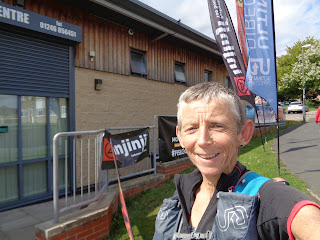 After a briefing in the garden quad at the Resource Centre we were walked to the start.
I found myself closer to the front than I had intended and then realised some were relay runners and speedy guys like Kevin. Oops. I probably set off too fast but it was good to keep people who knew where they were going in sight and it was very runnable.
A lovely mixture of field paths, blue bell woods, trails and some short sections of tarmac to link it all. I was soon pretty warm but by 5 miles or so had settled into a more realistic pace. Some point around here Daryl caught me up and it was wonderful to have company for pace and the route finding. He used his garmin while I read the text and refered to the map every now and again. It didn't stop all our errors but one was over excitement at a nice down hill and the other me missing a sentence when two bridges were mentioned. Neither cost us 5 mins in total but it did ultimately cost him his sub 6 hour finish which is a shame. CP 2 had food so I grabbed a banana and some crisps.The course profile suggested that the biggest climbs were in the first 10 miles or so. I resolved to walk the steepest hills in the hope I would save some running for the flat bits later. Daryl was happy to agree. At this stage we were being very polite and both suggesting the other should run on alone if they felt capable. Politeness didn't last. Between CP3 and 4 my foot started hurting and Daryl had stomach pains. Politeness was traded for farting (what is it about eating and running) and swearing as we tried to keep up the pace but were hurting! 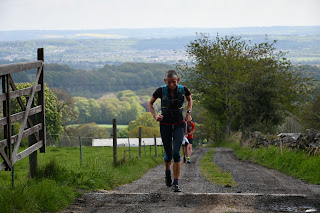 The week's rain had made some of the descents in the woods rather muddy but mostly it was fine. and the instructions were mostly making sense. I grabbed more food at CP4 but cannot eat on the run at that speed. 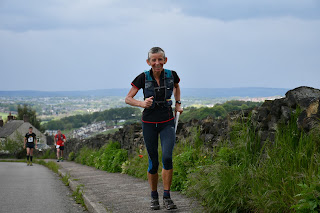 Luckily I was carrying some MF jellies and could manage those. Ian caught us up and was flying- a true runner who was loving the flatter course. No chance of me beating him today. We noticed huge storm clouds lurking and soon after CP5 stopped to but jackets on for a few miles.The last 14 miles or so were flatter but they also included some long straight sections which were mentally tough and more hard surface under foot which was the last thing my foot needed. I must be the only person who rejoiced at the sign of mud. Actually mud was also our friend with stud marks often confirming that we were on the correct route- well either that or all those in front were also off route. I have quite good map memory and as CP6 came into view I knew what was left. It spurred me on. The CP itself was highlight of the day- strawberries, grapes and melon! I was now also shadowing a runner that knew the way and so keen to hang on or at least keep him in sight. Daryl and I drifted apart a bit. As we climbed to Heath and scene of our overnight stop I knew there was about 3 miles left and it would be possible with a little effort to get under 6 hours. I upped the pace over the field paths and then the Five Pits trail area into the woods. All was OK until we hit the old railway line. My heart sank. It should have been so runnable but was such an effort. I blocked all other thought and worked on keeping the guys ahead in sight. 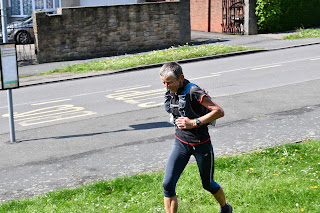 It worked and I think I finished in 5hrs58. Daryl appeared only a few minutes later. 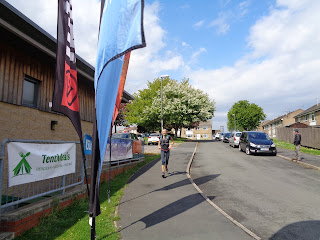 Phew I had done it and had a great day to complete my challenge. 100 race ultras done, a race win, a new women's record and a top day out. Thanks for the company Daryl and for pushing me when alone I would have gone slower. 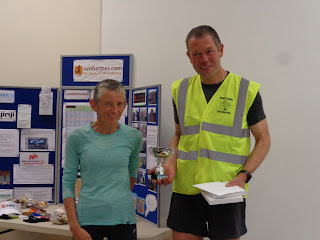 After collapsing on the floor outside the hall I did a second finish to get a photo but we soon had to move inside as it got chilly. 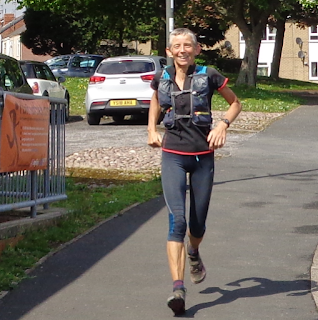 Sarah C was second woman and Debbie was back soon too. Bob had left me a special card and the front runners had already signed it. 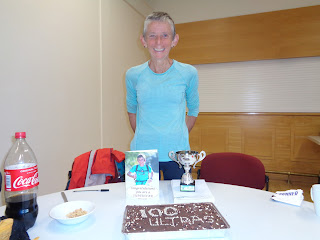 We shared cake as others signed too. Bob had been very worried about the 9 hour limit. His time is usually mine plus 50%. Not today. 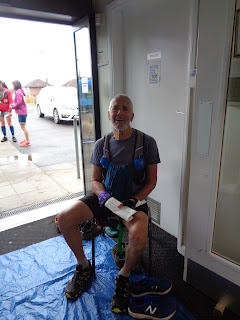 He was flying and finished in under 8 hours. It's the big hills that now slow him down and today's undulating course suited him well.
We sat eating and chatting until all runners were back. Then it was taking down damp flags and banners before the long drive home and a celebratory beer.
The question now is "What next?" Another 100 ultras in the next decade? Aim for 50 over 100 miles?
Posted by Ultras and a lttle bit more at 04:00