After the LDWA 100 I had a rest and a weekend off. It wasn't energy free as it also involved Sarah's 50th with a ceilidh and a walk/jog on Barden Moor on the way home but there was certainly no pressure. The following weekend saw a drive of fairly epic proportions to the Scottish Mountain Marathon (LAMM replacement). The event centre was Strathcarron and the forecast was not good. In the end it wasn't at all bad with just a bit of rain on Friday night as we sat cooking tea in the tent. The midges were out in force though. Day 1 led us on a 32km route with about 1600m of climb. We didn't get perfect nav or route choice but there were no really tragic blunders either. The views north and NW to Skye were amazing. As we dibbed the finish the heavens opened before we could get the tent up. Luckily it stopped after a couple of hours. I say luckily because many of us had pitched in haste and were now on small humps with rapidly rising marsh areas and braided streams. Day 2 had lower cloud but just one small shower towards the end. We ran about 26km with 1400m of climb. Again we did OK and only lost some serious time of over 10 mins on one leg. I may not be able to run fast but I do seem to have stamina. Towards the end of day 1 I continued to feel strong and on Day 2 this was even more marked. It was nice to feel so comfortable although at times a little frustrating also as this was a pairs event. The real plus was almost all the course being on soft ground and so my foot issue just didn't occur. Happy running. I tried out my newish Altra Mountain Kings and the grip was great. We did OK overall and were pretty consistent. 12th each day and overall. 2nd F and 1st FV both days and overall. 3rd Vs on day 1 and then 2nd Vs overall, losing out on 1st by just 11 seconds.
During the week we climbed twice and organised the annual Scout/Guide orienteering Champs so not much time for running except to jog round putting out and collecting in controls. I woke on Thursday to find a sore ankle tendon- no idea how that happened but it seemed to get better and no worse with exercise. I hoped it would allow me to get round OK.
By Friday we were in Grasmere and meeting the team at Ascend Events ready for the Lakeland 5 Passes event. All the flags, banners and display boards went up that evening which gave me a relaxed start to Saturday and the race. 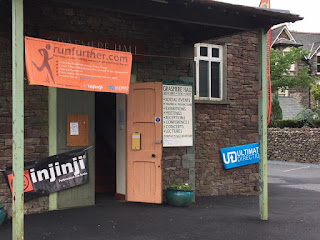 Bob went off early to do parking duty and I pottered with breakfast and kit. In the hall I tried to direct Runfurther people to the boards and spot prizes before I met up with Richard L who I have not seen for ages. Earlier in the year I had persuaded Sabrina to enter and ensure that she had 4 counters for our series. I was keen that it was won this year by a fast runner and not an old plodder. She claimed to be tired after the Dragons Back and then an impromptu Ramsay Round last weekend. It's fair to say she did start cautiously as we streamed out on the tarmac and track towards Loughrigg but from that top at about 3 miles she started racing.
From Loughrigg you drop to Ambleside and then climb to Wansfell. It was steamy and yes we possibly had gone off rather fast.
The second summit was cold and breezy so it was a relief to drop to Troutbeck. Well relief from the weather, sadly not relief for my feet as Nanny Lane is gnarly. A fallen tree had brought down some dry stone wall and the obstacle bunched us all up again. As we started the pull up the nicer side of Garburn Pass I started to struggle.
Hayley Evans was long out of sight and now Sabrina and Helen started to disappear too. Ah well, plod on the best you can. Again at the top it was breezy. The drop into Kentmere has to be one of the most eroded tracks in the Lake District but I had in my head that it was awful so on the day it was just bad rather than dreadful. The CP was stocked with all sorts of goodies. I ate quiche while Bob refilled my water bottle. Then it was off to Longsleddale and more gnarly track after a short grassy section. I was now on my own which was fine but meant it was easy to ease off. I tried to see runners up ahead and to work on reeling them in.
It took a while but by the top of Gatesgarth I had overtaken one and caught an other. It was damp and cold enough for me to put my cag on here but I wasn't overly concerned by the low cloud as I knew the way. The odd tiny yellow flag just helped serve as confirmation. The safety marshalls on Harter Fell looked cold but I didn't stop more than a second as I had spotted more runners ahead.
This section and across to Thornthwaite Beacon was my favourite and the cloud allowed occasional views. I couldn't quite catch the guys ahead yet but they were still in my sights as I dropped to Threshthwaite Mouth and climbed up to Stoney Cove Pike.


Again they were runners from other parts of the country and had no idea where they were or where they were going. I had twice called runners back in Ambleside and was now asked if we were "on Kentmere". The look I got when I pointed out Red Screes across the valley and explained that it was our next summit was priceless.
The drop to Kirkstone was not as greasy as I had expected and I broke out onto the grass where I could. Again the CP had quiche and again I refilled my bottle (although I forgot to add the Mountain Fuel powder).

I set off to take the last serious climb eating as I went. The climb was tough but I loved the descent to Scandale Pass- don't mind mud and bog.
Sadly it then changed into another gnarly track and by now my foot was complaining big time. 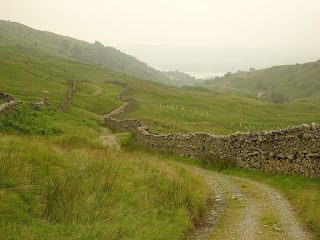 The male runner I had my sights on ran steadily away as I ran/jogged and walked. Another woman caught me and this dredged up some spirit and made me fight to stay with her.
We took it in turns to lead. Dropping to Sweden Bridge and Rydal I used the verges where ever I could and tried to force some more food down. 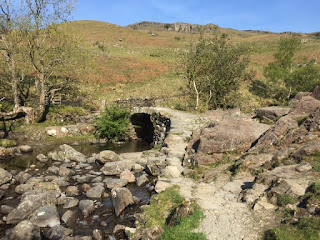 I have decided I prefer Aldi 'fake' naked bars to the real thing and will never bother with gels even if they are a freebie (MF Jellies were what I should have had).
The dirt road to the Hall and campsite seemed longer than I remember but I knew there was a tap and so was able to refill again and to remember this time to add MF powder. All that was left was the old Coffin Road- how appropriate. I was struggling but determined not to be dropped. I am glad I had receed this as it was over sooner than I thought and then there was just the steep tarmac   down to Dove Cottage and the main road. We debated which route to take to the village hall. Neither of us knew which was faster. I hoped the riverside path would not be busy and opted for it. My new friend followed. To my surprise it was deserted and the gamble paid off. I could smell the finish and dug deep. I had been 4th all the way round and was not about to let that change now.
The final steps to the upstairs of the hall were cruel but I stayed ahead, by less than a minute. Bob was back from the Kentmere CP and so was here to great me and get me cups of tea. After cup 6 he did suggest I just asked for the tea pot. My foot was agony for over an hour but eventually it eased as I got stuck into the delicious post race meal. We had agreed to wait for as many runners and especially Runfurther runners as possible and so had a very relaxed late afternoon.

As usual I had forgotten to turn my watch off so for the moment my time is a guess of about 7 hours, 4th F and 1st FV50.  I had hoped to run more but I guess it wasn't so bad in the end. 33 miles and 10,000ft is advertised. Interestingly my device measured 49.75km and 2700m whereas Sabrina measured 50.37 and 2828m (her is a much fancier beast so is likely more accurate). I also forgot to go and take a screen shot of the results so these will have to wait.
Posted by Ultras and a lttle bit more at 11:32