Not race 1 in Runfurther this year but race 2. Another change for me was getting up at silly o'clock and driving over on Saturday morning rather than staying there in the van on Friday night. With a short detour to Mellor to collect Kevin we were still in Haworth before registration opened. The flags and banners were up, mint cake delivered and the display boards and spot prizes set out. It seemed quieter than usual but perhaps people were self- isolating in their cars.  Many were discussing race cancelations and interestingly several had hoped this would cancel too! We were due to drive to Dover on Sunday to ski in France and then climb in Spain and I must admit my head was elsewhere as we sat chatting. It was a bit chilly but the forecast was good and certainly not the snow on my last run two years ago.
After congregating at the top of the street we were herded down to the Fleece for the official start line. It didn't seem worth jockeying for position near the front and then having stud marks up your back. True it was slow for 100m but there was plenty of time to spread out.
It was my 11th Hobble and I wondered if I was getting a bit bored with it but after not getting an entry last year it seemed OK.
I deliberately started steady but was still keeping John T, Josie and others in site for now. There was no queue at the stile and we were soon on the open moor.  John took his cag off here and caused the weather gods to send some drizzle. I was cautious on the muddy bits and not entirely trusting of my ankle/foot. It had seemed to be improving until a few days ago.
Top Withens came and went. I was very cautious on the flagstones, especially as we started to descend but twice tweaked my ankle enough for a yelp. Towards the bottom came a bigger tweak and a full on cry out and need to take a moment or two or three. At this early stage I was really thinking I might need to bail at CP1 or perhaps Long Causeway. So many lovely people stopped to check I was OK- well I wasn't but there was nothing they could do about it.
Laura and David from Sportsunday cheered me up a bit as I ran along the reservoir. And as David pointed out "It's turned out nice again." Ironically the climbs were going well as the slower pace meant I could carefully place my foot. The lovely descent towards Hurstwood was torture this year and it was so frustrating. A few more minor yelps.
I didn't dare stop and get comfortable at CP2 and concentrated on trying to claw back some lost time. Strange to be thankful for the tarmac!  I passed Janet who had set off early and focused on the group ahead and the promise of a hot dog once I got through the mus at the farm.
Usually I like the contour across from Mount Cross to above Tod but the mud caused my foot real problems and it was hard work concentrating on minimising the jarring. By the time I passed Andy Ford who had come out to support I must have looked pretty grumpy. I had another serious tweak in the mud by the golf course but luckily the tarmac afterwards gave some respite. I tried to be positive- I had not bailed at CP2, I was over half way now.... there were donuts and whisky waiting at Mankinholes.

Climbing up to Mankinholes I started catching some others and then even overtook a few. More positive vibes. Even better was the climb to Stoodley Pike. 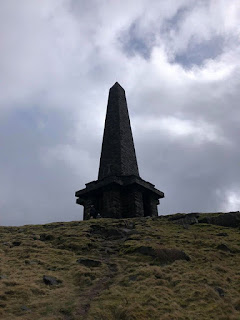 Not running the muddy flats and the gnarly downs meant that my quads were in better shape than usual and the climbs seemed so much easier. I caught and ran with Brian S who was feeling pressure of Hester not far behind. Again I embraced the tarmac drop to Hebden and powered up the hill to Heptonstall. I was gaining places now and reflecting on those articles about negative splits. I had been really worrying about the drop to Horse Bridge but it was better than I hoped even if I was very slow. There I found Albert and the hung-over Toney sat having a picnic.
I know the route well enough to visualise the route and knew we were now on the home straight. The PW that I had been stressing about was still likely but perhaps not by the 45-60 mins I had dreaded. The next section is climb and although I didn't run it all (don't be silly) I did make good time and by the time I could see the last CP was reeling in a couple more runners. I had so much energy on the lane and up onto Walshaw Moor that it was unreal.  True I was a bit slow on the following descent but even there I caught one runner. I must have looked comical when I reached Dave W taking photos on the last gnarly section. My foot was so painful now on anything other than tarmac that I almost cried just looking at the rocky steps. Having been laughed at and abused in true Dave fashion I set off on the next section on a mission. Yep, another one overtaken. From here to the end was all runnable, even with my foot and I reckon I ran almost all of it and certainly more of the ups than I usually manage. Realising that it might not even be a PW also helped. I didn't quite catch the guys on the road climb to Penistone Hill but I was gaining ground and that spurred me on. Quick checks of my watch confirmed I could beat my time from two years ago ( that had been a PW) which for most of the race had seemed impossible.

I arrived in time to eat, drink and see the prize giving. Ken and Kevin had raced each other all the way round but crossed the line together. A recovering Rory was third.
Josie and Kat had found each other and finished seconds apart with Kat taking third lady in her first ultra. She said she was shattered but I am not so sure. Brett said there were no V50 women back yet but I was... so 5th F, 1st V50 and a nice bottle of wine. ( I told you the field  was smaller).
Before long I was cheering in Kevin, Nick and others. My ankle was sore but happy not to be on uneven surfaces now. Chats with friends, trying to make sure spot prizes were taken, more donuts and tea before we took the flags down and went off for our committee meeting. The Old Sun was closed  as they had tried to double the landlords rent so we went to the Old Silent where we met him again.
Not a bad day out in the end but my foot now seems to be bu**ered. I wonder whether the next races will happen- the Fellsman has already gone.
Update- went to bed knowing in my heart that our drive to Dover in the morning was not really going to happen. French Government have now closed all ski resorts, travel in France is being limited and travel to and in Spain even worse. Spent a depressing morning emptying the van of ski and climbing gear that has not travelled anywhere. An now the local climbing wall has closed and my foot is so sore I cannot go for a run on the hills.