Should be easy- local to home, mostly over moors I know, only 44 miles..... Ha Ha. Despite it being local we drove across in the van on Friday evening so that we could sort out flags and banners etc. Just as well because there were not many places to hang things. 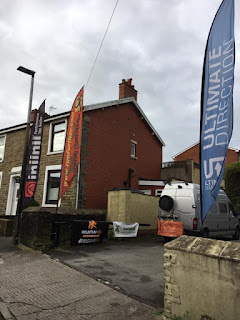 I might know most of the area but not the myriad of rarely used paths that some of this route followed. Fortunately I had done a Howler recee for the second half and checked out some of the rest on my own. Yes, only 44 miles but that means some fast running and my body has become rather accustomed to stomping up very big hills or rock climbing. It was going to be tough.
Luckily some things did go my way. The weather forecast that had been pretty dire earlier in the week changed and in the end it was dry until early evening when most of us had finished. It was very wet and boggy underfoot but what's new on the South Pennine moors and soft ground helps my foot too. I was hoping I would have the company of some guides over the first few miles and this worked out too; well mostly.
We stumbled along over tussocks and ditches in the dark for about 30 minutes until sunrise but there was a line of local runners to follow. I picked the wrong runners to follow and did a quick visit to Darwen cemetery but we didn't lose much time there.
Once up at the Tower (aka Lancashire's rocket) I knew the way and could relax. 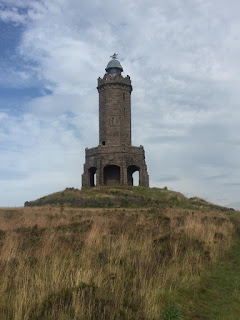 A nice run down to Slipper Lower, through the woods, across the road and up over Great Hill.
All familiar ground- and I have missed these moors after an absence of two months. There was still one short footpath after White Coppice that I had never been on before though.
I would have been happy on my own but had the intermittent company of several runners including Tim C who was recovering from an injury and taking it easy. Running off Great Hill and down to the cricket ground I spotted David and Laura from Sportsunday photos- I bet they were glad it wasn't raining. Before long CP1 at Jepson gate appeared. Somehow I was first lady? The next section had some fiddly bits and I am still not sure the best way through the boggy areas and up to Sheephouse Lane. Familiar ground around Rivington  and Winter Hill was straight forward and then CP2.
I stopped here to refill bottles and eat a bit but I knew I had not really been eating enough- I struggle as soon as the pace increases and never really fancy much anyway. I was on my own from here through to CP3 as faster men had slowly pulled ahead. It was now warm and I stopped again to refill a bottle and eat again. I was still first lady at CP3 which was puzzling as I was sure Fiona was ahead.
After commiserating with Dick who had pulled out with a serious shoe malfunction I set off for our third tower above Ramsbottom- Peel Tower.
I was starting to struggle now and knew I needed to run more but just couldn't do it. I like these moorland tops but my legs were heavy. After the drop to CP4 I slowed even more and then there was another drop to Book 1- The Long Way Home (you have to return with a page Barkley style.
As I turned to trudge back up hill a grinning Fiona came flying down. She looked so fresh and was obviously overjoyed to have caught me. She had lost at least 20 minutes getting lost somewhere between Darwen Tower and CP1. She seemed to bounce away along the path and I tried to tell my tired body that once it was contouring I could run too.
I estimated that he gap was only about 4 minutes as I spotted her ahead and timed myself to that point. Book 2 was down a slightly hidden and overgrown path. Fiona couldn't find it. With only a slight error and one fence climb I led about 5 runners safely in. As we left the Haslingden area and turned for the final boggy moor Fiona upped the pace yet again. I tried to keep her in sight but lost her at the road crossing. I found the tiny overgrown path and stopped to pick a few raspberries- yes I know it was a race... and then knew it was only 10 minutes or so to the finish. I was going to be outside 9 hours and would not catch Fiona so the raspberries seemed a worth while treat.
Stu from Howlers had set up a gazebo in the pub car park and Bob was there with the Runfurther boards and prizes. 9hrs 7 and about 3 minutes behind Fiona. It was good to stand there and cheer other runners in. 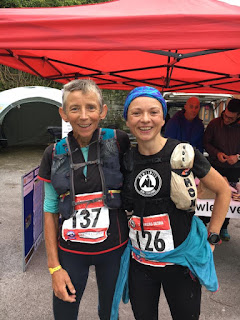 Today's effort had hurt. After a cup of tea, soup and a rest I treated myself to a massage. A good day out for Runfurther runners with Ken taking first man, David having a good run plus Fiona first woman and then me. 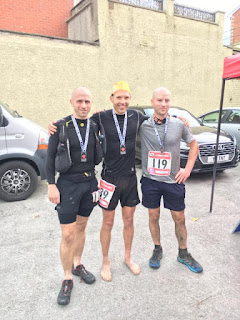 Also thanks to the landlady for letting us 'camp' in the car park and put the flags where ever we liked. Also for the awesome double fried egg bap for breakfast. Nice little pub if you are in the area.