Round Rotherham- the last race of the series

It's a funny race. I both love and hate it. Yet this was to be my 9th outing.
Hate it? Well yes. It is my annual punishment sufferfest as the course is flat and fast making it totally unsuitable for an ageing plodder who has rarely done sufficient training. It always hurts. My foot also hates the hard surfaces of many of the tracks and especially the efforts made by some fool who tipped aggregate along a nice muddy path.
I also hate the fly tipping and the lack of pride in community that this shows is depressing.
I do though love the people, quite like pitching myself against my previous times and the unpredictable October weather (although usually it is fine) and I love meeting up with old friends.
I don't even mind the agricultural fields and the industrial scenery- I just let my mind wander on the history and feel sorry for the communities like Orgreave for what they suffered in the miners strikes. It's not all horrid fly tipping some of the villages are pretty and the Roche Abbey area is lovely.
I completed number 9 and so now I guess I will return next year to get my special award for 10. Not that this is very impressive as Henry Morris has just achieved 30 and on one year did it twice with back to back runs.
The race usually heralds the end of the Runfurther season and our last committee meeting before the AGM and Prize-giving. That's my excuse for my head not always being in the right place! This year I had more excuses... my summer of six weeks rock climbing and one big event which involved lots of power walking up mountains and careful running down the other side is not ideal preparation for 50 flat miles.
On top of this I had successfully arranged for Sabrina to target winning the Runfurther Women's champs. Fearing I might do RR without her and so take important points she had entered too, even though it was not the sort of race she would enjoy. Then I worried about her getting lost and so arranged for Kevin to 'escort' her the best he could.  I really didn't want to win by default but this also meant that now I had no reason to run hard. We started together but even before Elsecar I knew I couldn't maintain that pace. Elly, a very young local girl, also shot off. Ah well, I would concentrate on being third.
The weather was superb. Dry, mild and even sunny later. The fields were nothing like as wet or muddy as I had feared. One local guy at Woodsetts was convinced I was taking the P*** when I said I thought it wasn't muddy. I had to explain that if you run on the West Pennine Moors mud means people swallowing bogs not a bit of mud on your shoes and some splashes on your legs. Don't think he will be visiting us soon!
Despite the hard (for me) pace I was enjoying myself. I had a chat with David B who I do not see often. I ran with Martin from NY Moors until I couldn't keep up but then overtook him in the latter stages.
I only saw Chris briefly as he stopped for a toilet break and then got lost- not often I beat him. It was good to see Nigel who I rarely see at races now. Then there were others lurking not far behind but getting closer over the past year- Kevin S and Sarah C.
I was 'around' the same three men for much of the race with each of us proving stronger at different points and each of us stopping for different spells at CPs. I think I stopped longest but I was struggling to eat on the move and was trying hard to make sure I got some calories in without only relying on Mountain Fuel jellies and Raw Energy powder.
Being with then certainly stopped my time from drifting even more badly and I am very grateful for Kevin B who had started at 6am but ran the last miles for me. As he kept trying to run it shamed me into joining in.  It was a happy partnership with me knowing the way, the odd chat and a bit of mutual motivation. The one place I didn't stop was the new CP which had moved from Old Denaby to Hooton Roberts. It was very slightly off the path and at that stage I still had hopes of scraping in under 9 hours.
I am very very glad I didn't know that Elly was in fact only 30 seconds ahead here. Her mum texted her that message and she wished she hadn't. She too was dog tired and now knew she had to keep running. I don't think I could have done much about if even if I had known but it would have been interesting to see I suppose. We made good time along the riverside and canal but I did walk up through the slow climb in Swinton (well it's flat almost if you haven't run 50 miles) and then after Dearne College I had a couple of moments when I realised that the race was more than 50 miles, more than 81km and I would not be under 9 hours.
So Thanks to Kevin for his company, to Sharon and all the organisers etc as usual, to Kevin H for helping Sabrina,

to the farmer who had not ploughed the whole field but had left a strip of grass to run on and to the farmers who had crops in the fields rather than a ploughed mess. 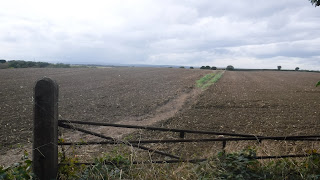 Biggest thanks go to Bob who injured had gone for a bike ride instead of running but then made sure he was back to try to get runners to take spot prizes, to get my shower stuff from the van which was down on the beach and to help with all the flags and banners. 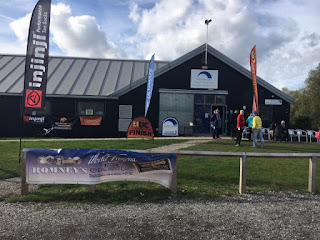 The 'new' venue for the race is great in many ways BUT... instead of doing the nasty road and cycle path in the dark when you are full of adrenaline it instead comes at the end in the heat of the late afternoon when each roundabout seems like just one too far and too many. 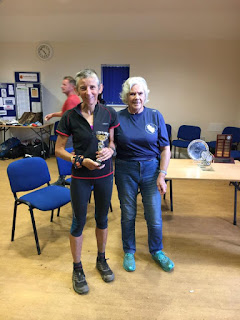 So 3rd woman in 9hrs 04 just 4 minutes behind Elly but a whole hour plus behind Sabrina. Hindsight is an amazing thing... If I had managed to persuade my body to try and got the 9 hours I wouldn't have made any impact on Sabrina who was within 10 mins of the women's record but I would have overtaken Hayley to be 2nd in the RF series. The men's points were also dented when the local runner Ben lowered his own record to 5 hrs 57 - yes for 50 miles with some mud. 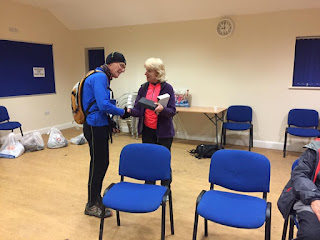 Dick was happy to get his 4th race and to take the lead in the Runfurther V70 stakes.