If we were lucky we would get the best of the weather for the whole weekend. It was raining as I set off but dry once I parked and walked to the hall. This event (not a race) is always very busy and the little hall only just copes. 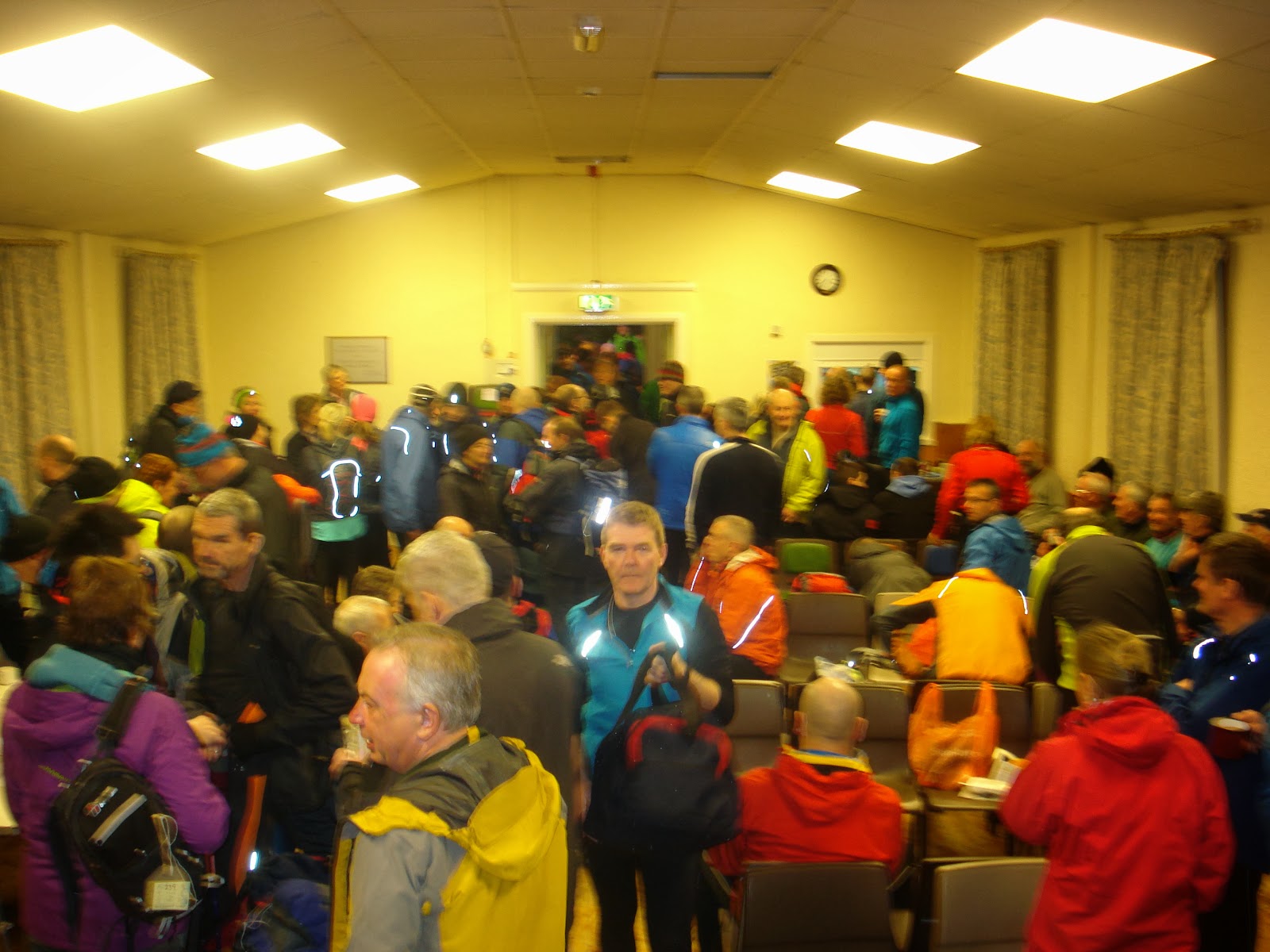 I registered with plenty of time and avoided the queues I knew would happen later. It was brilliant to catch up with so many friends. I had not seen Steve B and Mick Mac for a while. Nick was there early as always and before long Albert, Josie and Tony arrived. 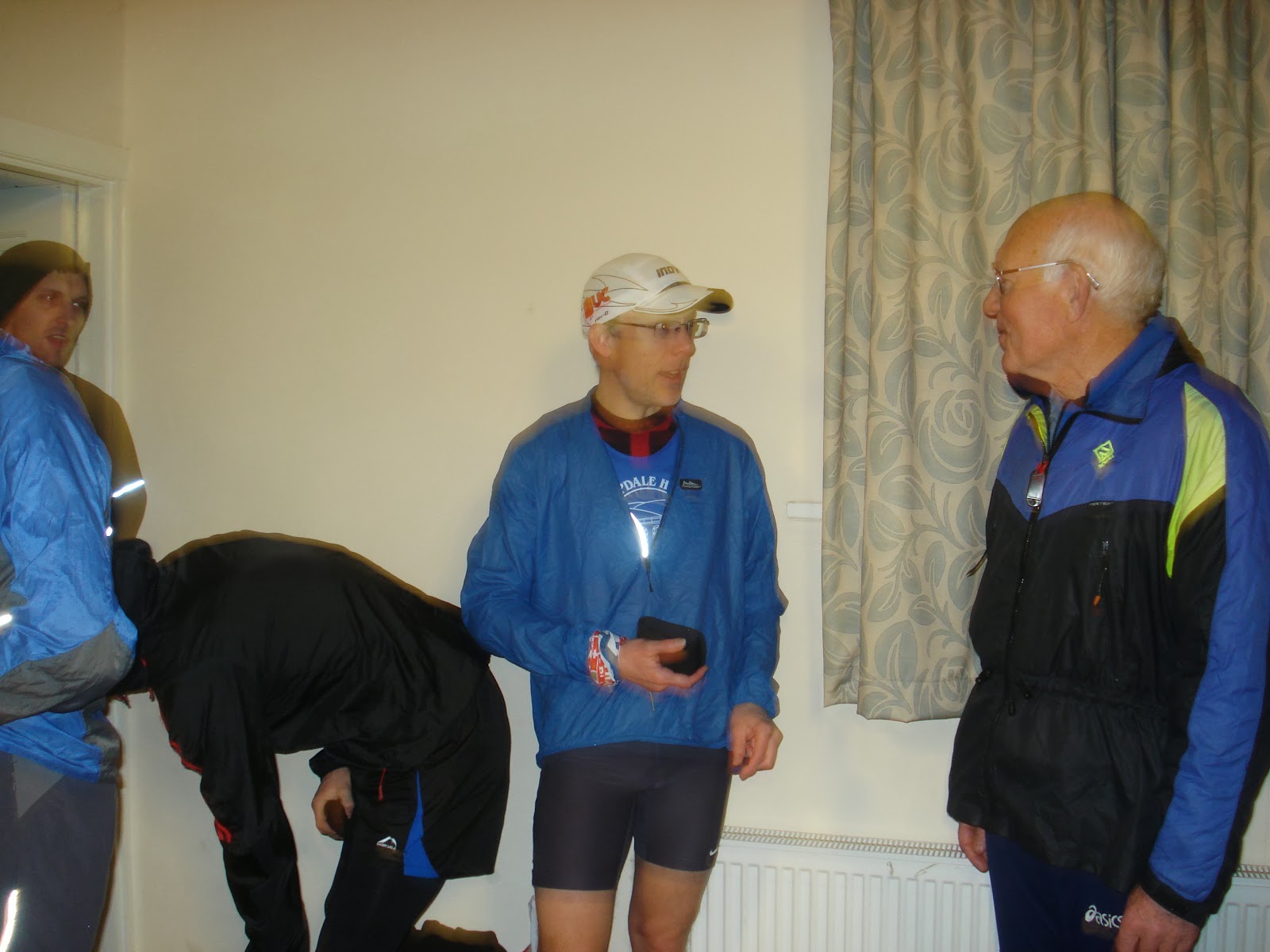 The fine weather allowed us to spill out onto the lane and wait. It was getting very crowded and stuffy in the hall. We all got our excuses in early. Mick reckons he is getting very slow, Tony has strained his calf and I was very worried how my achilles would cope. What a load of old crocks. The start was typical low key LDWA 'away you go then'. 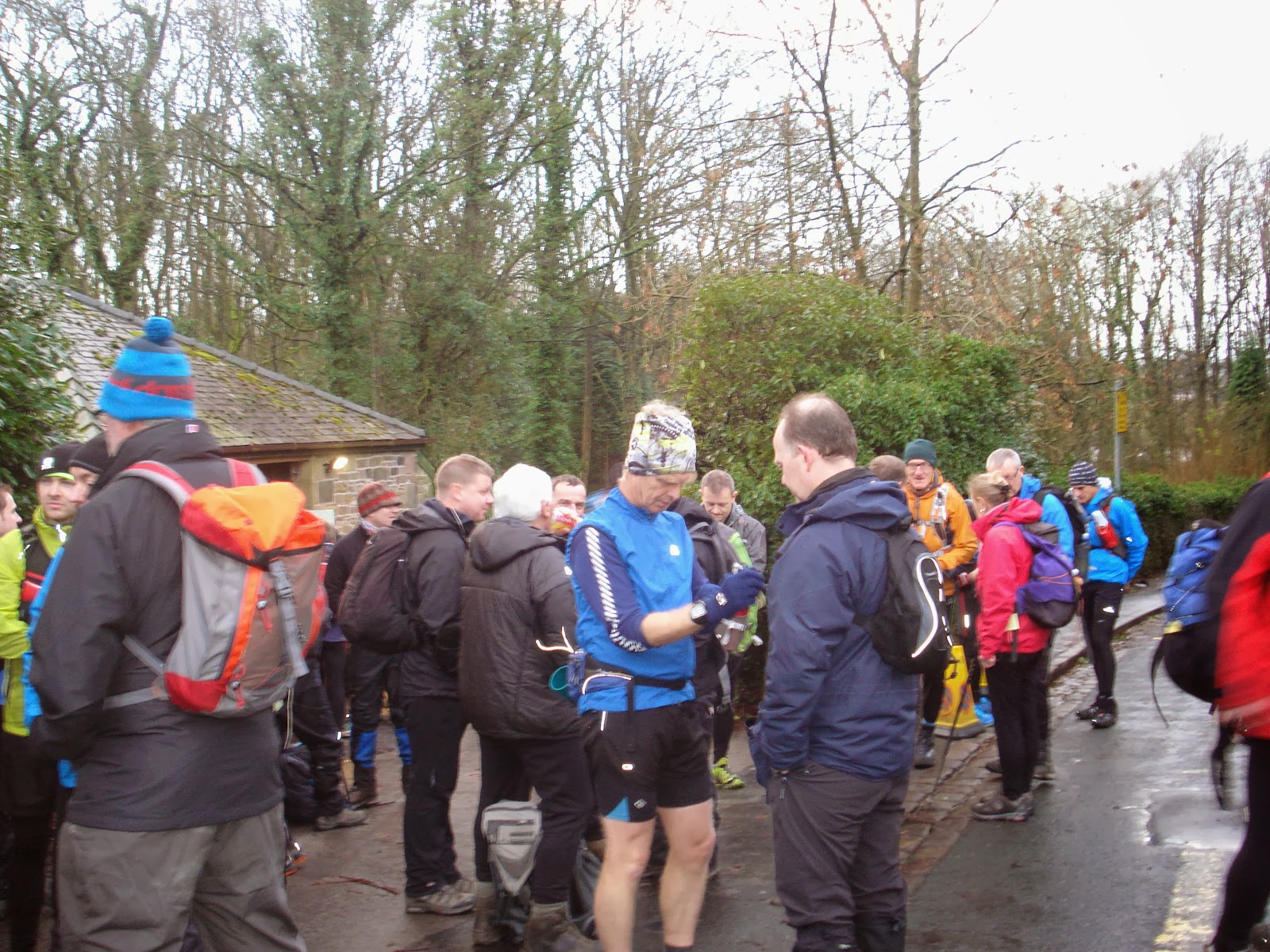 I know the route so well I can switch off and not worry about route finding. The plod up to the Pike is tough but at least we did not have the blizzard of last year or ice of two years ago. I was slow after Pike Cottage but managed to pull back some places and catch up with Pete and Nick on the descent- not something I expected. I was to leap frog back and for with the same 6-8 people for much of the morning. The moor across to the point where the short course turns off was up to its reputation of wet, boggy and tussocky but the farmer had mowed some of the marsh grass. Mark B and Gordon were out supporting. Pete slowly pulled away and I was not to get close to him for a few miles.  The CP at Turton reservoir had not yet boiled the kettle so I made do with a quick sandwich. The others made better time than me on the next lane but I caught them on the climb and we ran together again to Cadshaw farm. The wind was picking up but fortunately seemed to be mostly behind us. The next section is not steep but unrelenting and it was good to have some company to spur me on. Nick and I had decided we were taking the first turning to the Tower. I am never sure whether this is OK or not? but it was slightly less boggy and save a little bit of climb. I took a total face plant as one foot disappeared in the boggy water but still gained on the people that had gone high. I then caught them for a few moments as they were not sure of the way. It wasn't long before the tower came into view and with the wind on our backs. 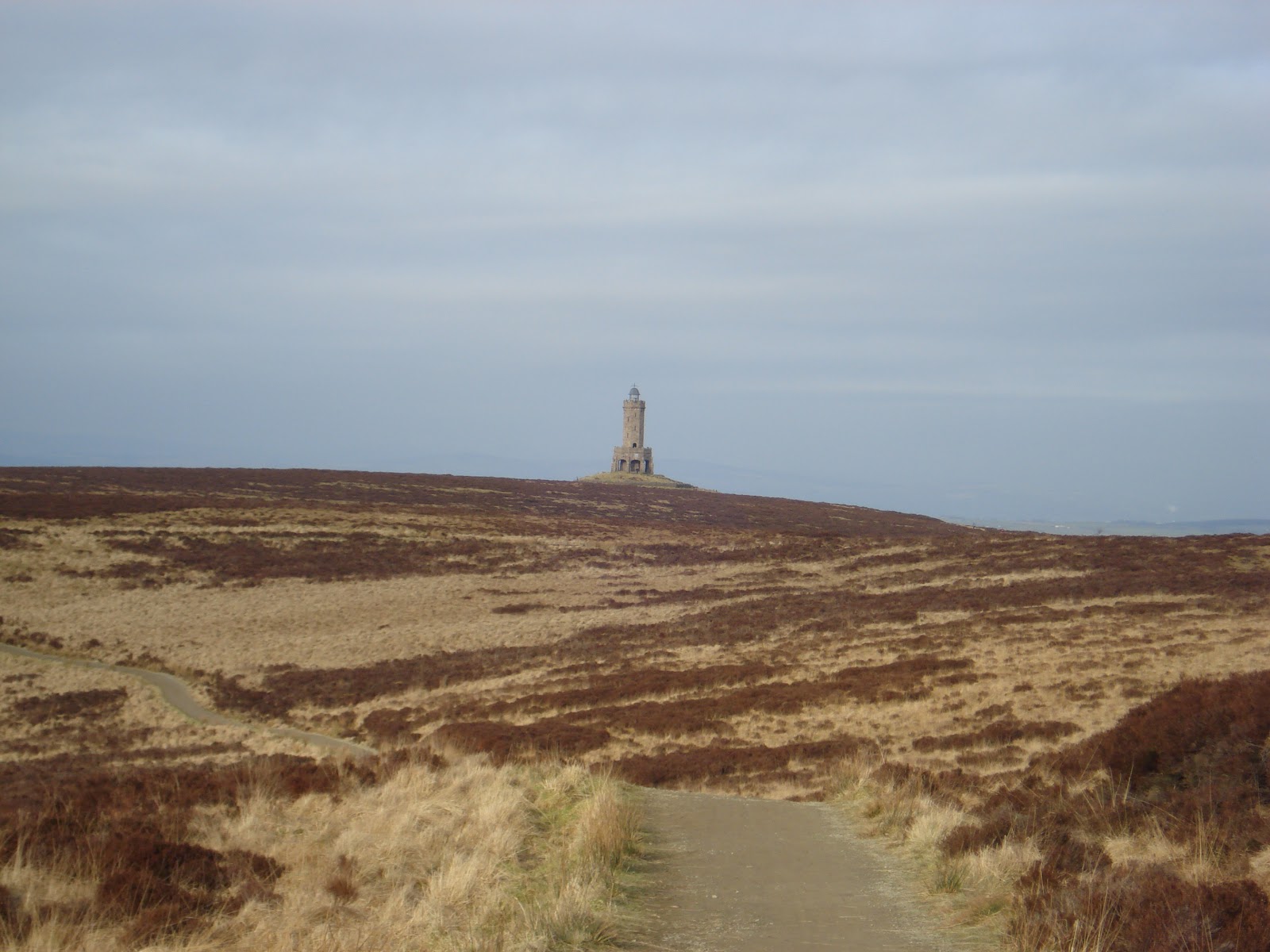 The CP was just a self clip so I grabbed a chocolate bar from my pack and set off on a very familiar route on the big track over Darwen Moor. I seemed to lose the others at this point although they cannot have been far behind.  The CP at Slipper Lowe was very welcome and I stopped for a cup of tea and cake. I was just leaving as the others appeared. The rutted water eroded path up to the Belmont road had been repaired and it was onto the bog fest towards Great Hill. I worked on picking off walkers and runners from the shorter route that had now rejoined us. The wind near the summit was fierce and I was blown off my feet twice and right over once. The wind also caught my contact lens so I was trying to avoid rocks with everything only partly in focus. It was a relief to make it down to Drinkwaters in one piece. I did not linger at White Coppice as the weather was closing in and the next section of path is not my favourite. There were two runners not far behind me now and I tried to use this to keep me going.  The mud alongside Anglezarke was as bad as expected but possibly preferable to the road section that follows. Kevin and the other runner caught me up here and then as we made our last climb past the reservoir overflow they pulled away. 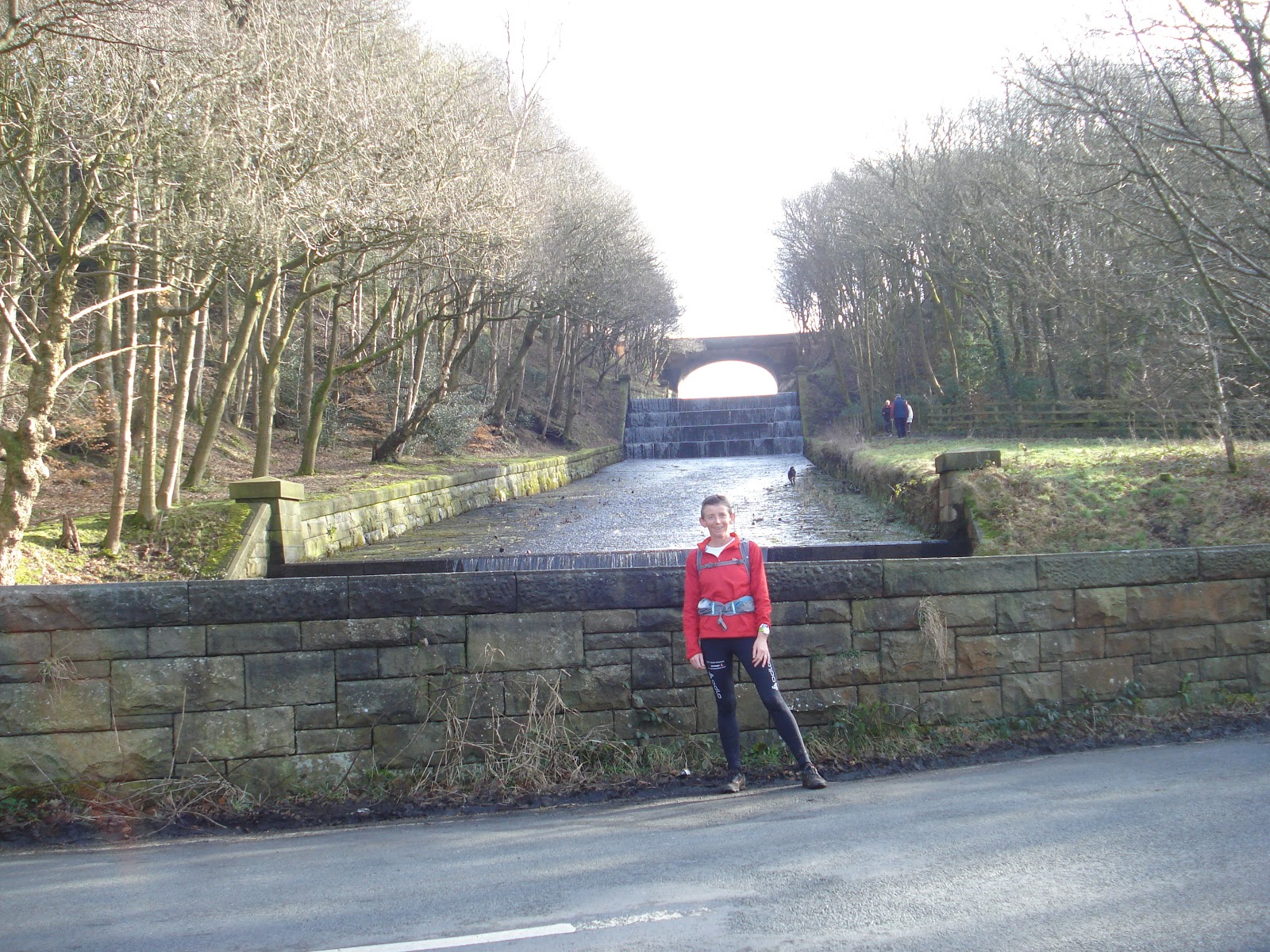 A quick glance at my watch confirmed it would be a PW today, although not by too much.  I arrived at the hall in 4 38. It was my legs and achilles that had let me down as I was hardly out of breath.  Nick and Pete were less than 10 minutes behind. Still, a good day out and we got round before the rain. A long slow refuel and chat followed and then I collected the RF flags from Nick before the short drive home. Hope my achilles forgives me if I sit and ice it while I watch the rugby. It poured down and blew a gale for the rest of the day so God must love fell runners.
Posted by Ultras and a lttle bit more at 03:15 No comments:

A short trot to test my achilles

The weather has not been kind, although I did manage a 75 min dry run on Wednesday night at Street O. Sadly it also seemed to inflame my achilles all over again. Not running at all over the weekend would send me stir crazy and the promise of a run keeps me sane during the week. I told myself I needed to 'test' my achilles on a longer hilly run. It was due to stay dry til lunch time so I was up and out to make the most of the decent weather. I bundled up warm as I was not expecting to run fast and knew it would be worse up there than it seemed at home. 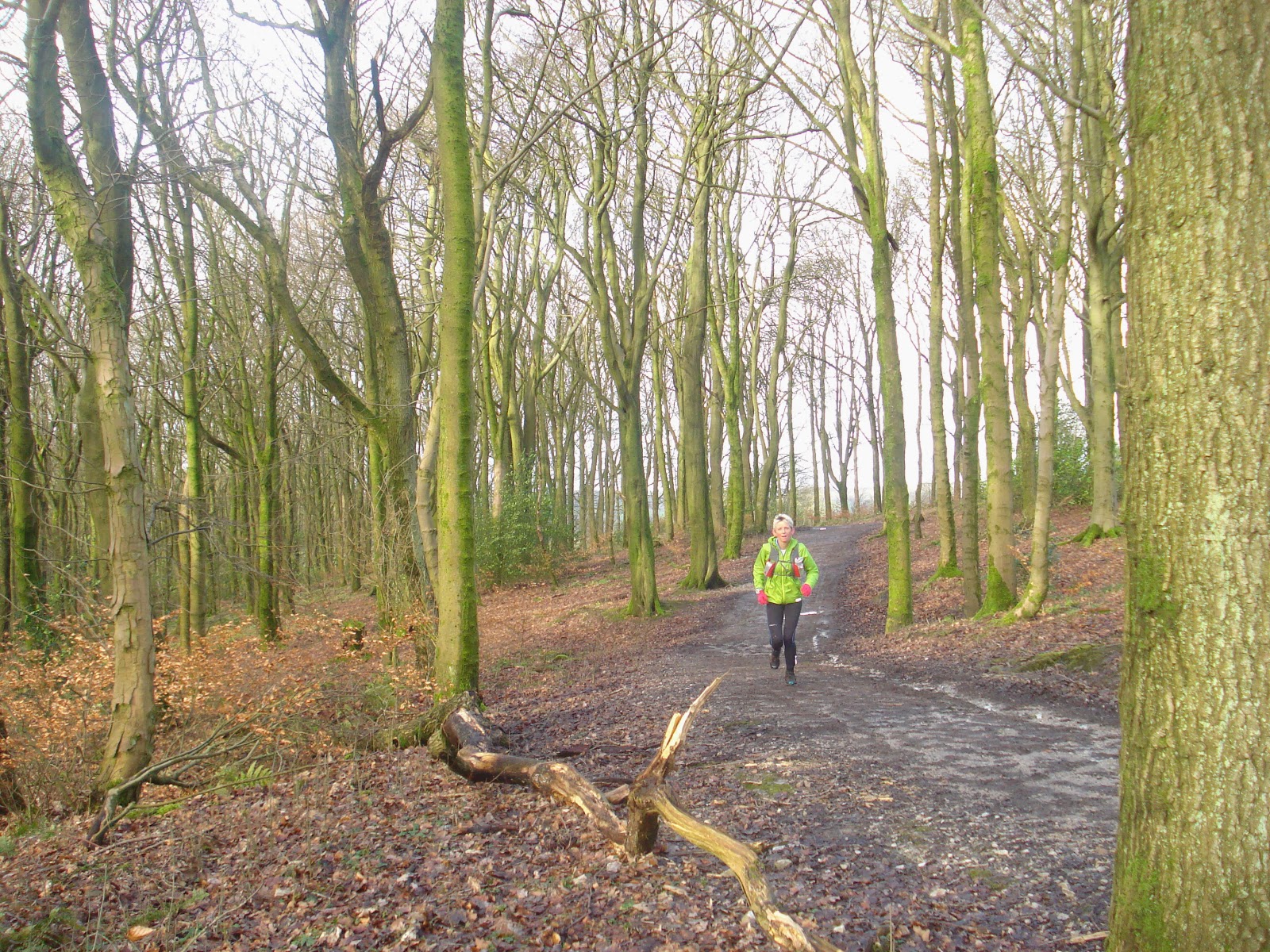 Before 9 I was parked up at the Hare and Hounds and admiring the new houses. I am not sure I would want to live behind the pub but the views and runs straight out onto the moors would be great. It is a nuisance that I have to drive if I want to run along something other than muddy fields or the canal tow path. I set off slowly along the reservoirs and into Roddlesworth Woods.They were beautiful and quite empty. The overflow channel from the reservoirs was a cascade of water but the paths were fairly dry. My legs felt heavy and trying to keep up any sort of jog was not easy. I allowed myself a little walk up to the visitor centre and then jogged up towards Darwen Moor. This is one of my favourite running areas. It is very varied, has some amazing and mixed views - including Darwen, Blackburn and Preston. 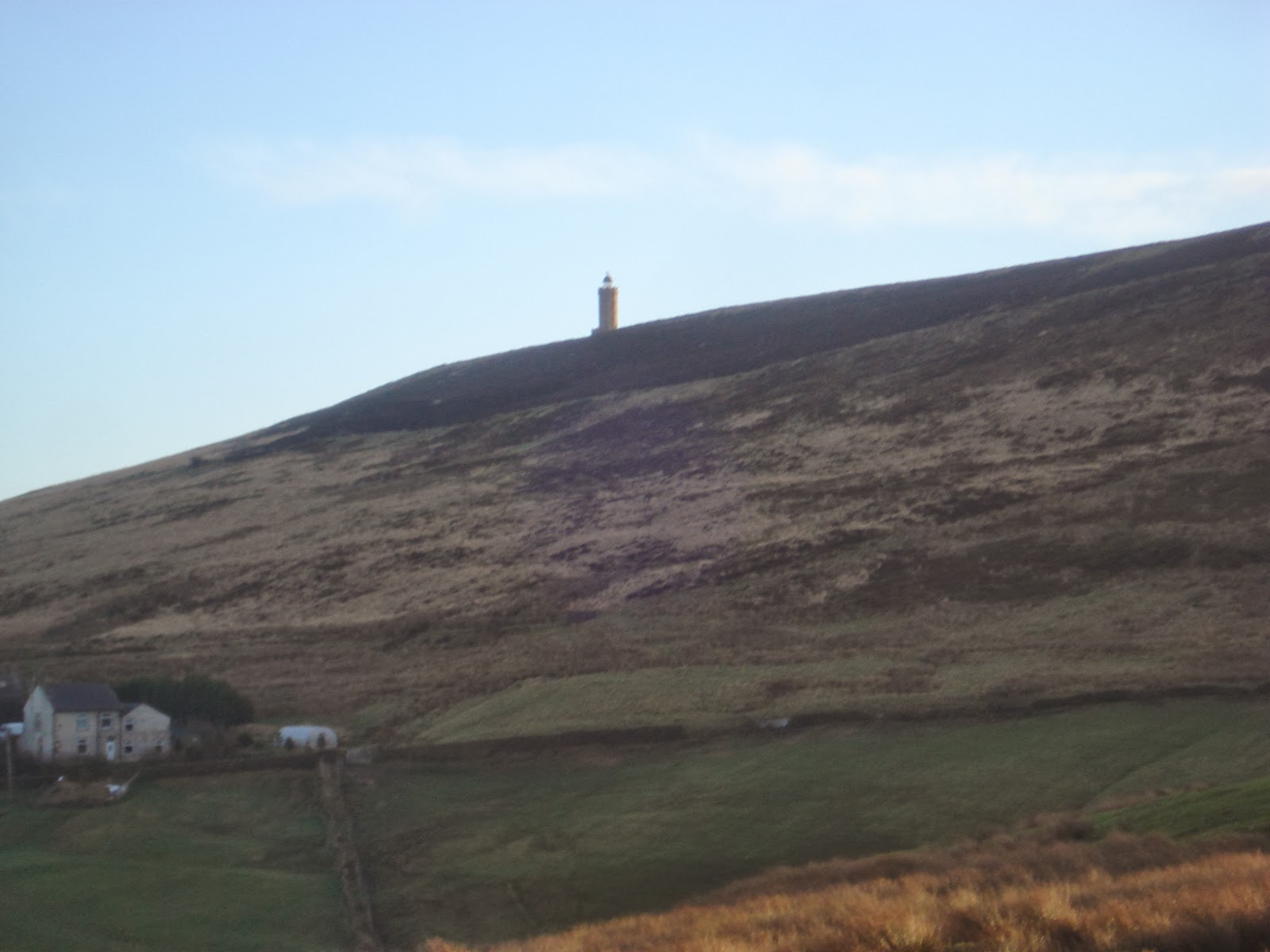 The wind was fierce up here so I took a bit of a detour before turning to head for the tower. At least the main paths were relatively dry. From the tower I reversed the Anglezarke Amble route in the hope of finding a friends lost camera. I could not believe how lucky I was with the weather- bright blue sky and sun! (I later found from Dad that Somerset was still being battered by rain and storm force winds). 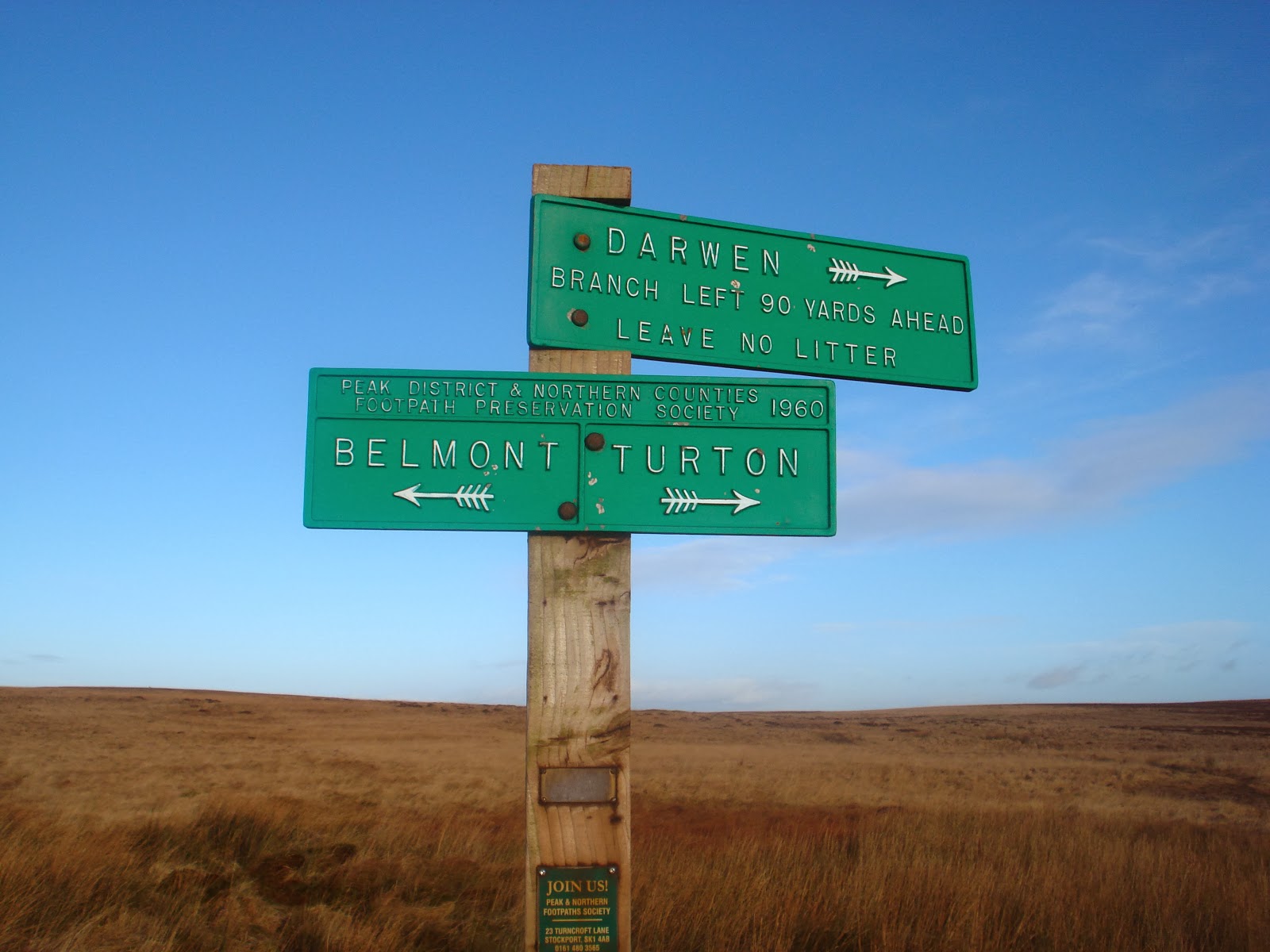 The moor was boggy and the ground frozen enough in places to be slippy and in others soft enough to break through to deep icy water. I took one tumble as one foot disappeared deep into the ground but no harm was done, except for muddy hands and knees. 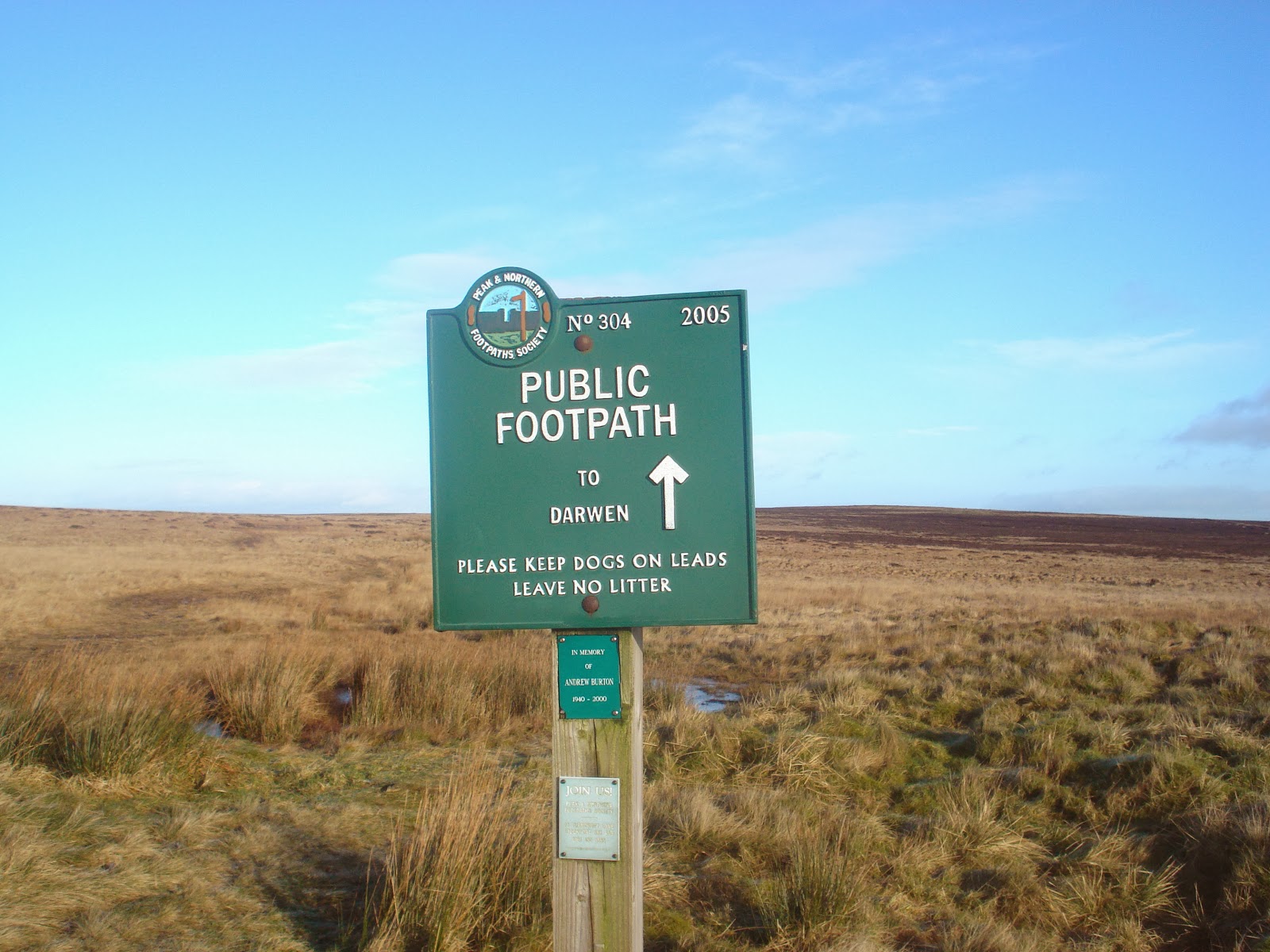 My achilles had settled into a pattern of sort of OK if I did not push it. Turning back towards the tower with the wind on my back was a joy but I knew it would be short lived. I made the most of it and kept a decent pace one now icy free paths. The tower looked great and I laughed as I remembered how we had told the boys that it was Lancashire's rocket when they were little.  I just hope the weather is this kind next weekend for the AA event. 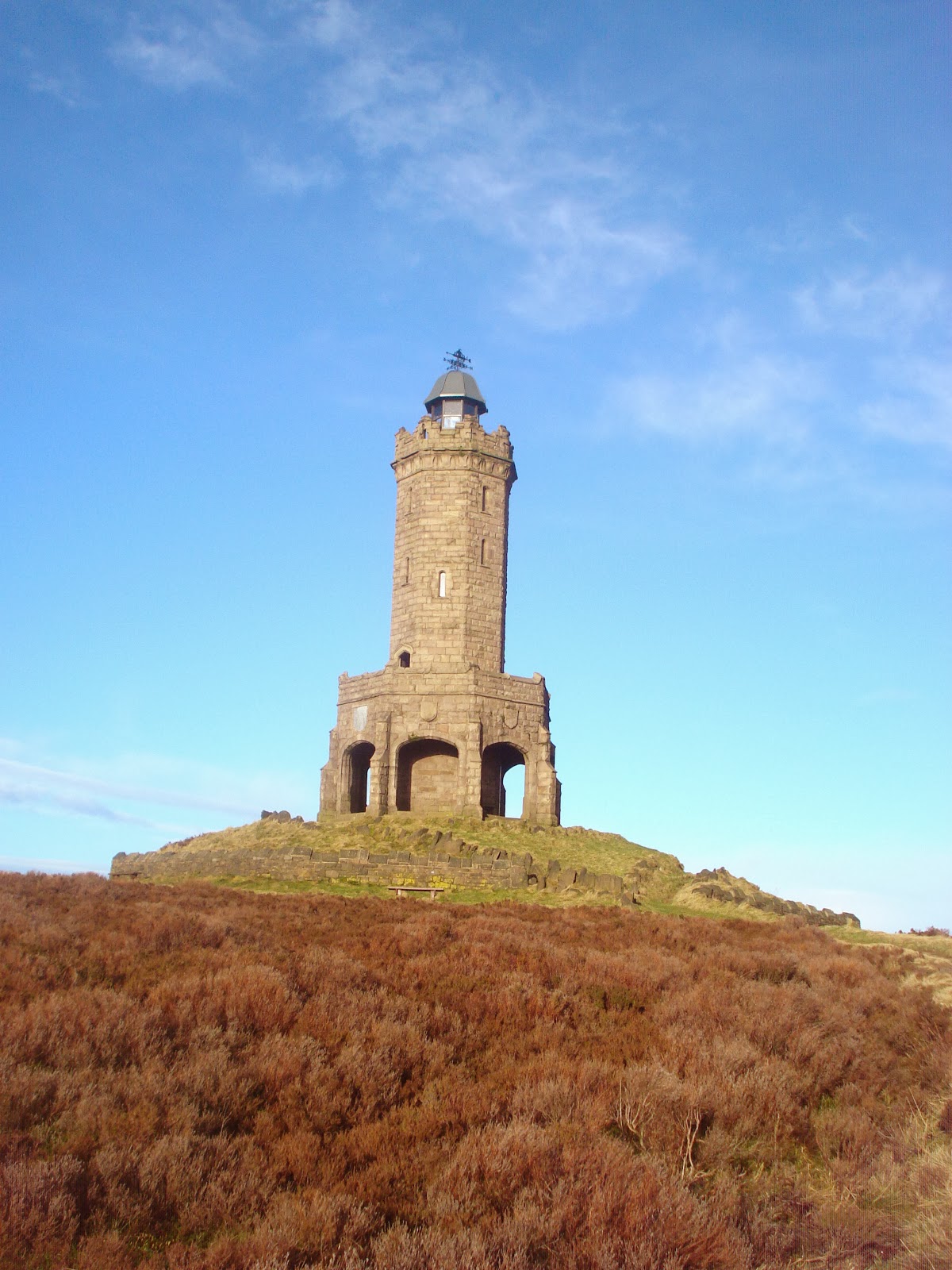 I abandoned my plan of the race route towards Slipper Lowe and descended to the woods again. It was muddy but more sheltered from the wind. I explored and had a lovely run round paths I had not run on for months and then decided that the weather was certainly going to turn, just as predicted. It was a slow and rather painful run back to the car. 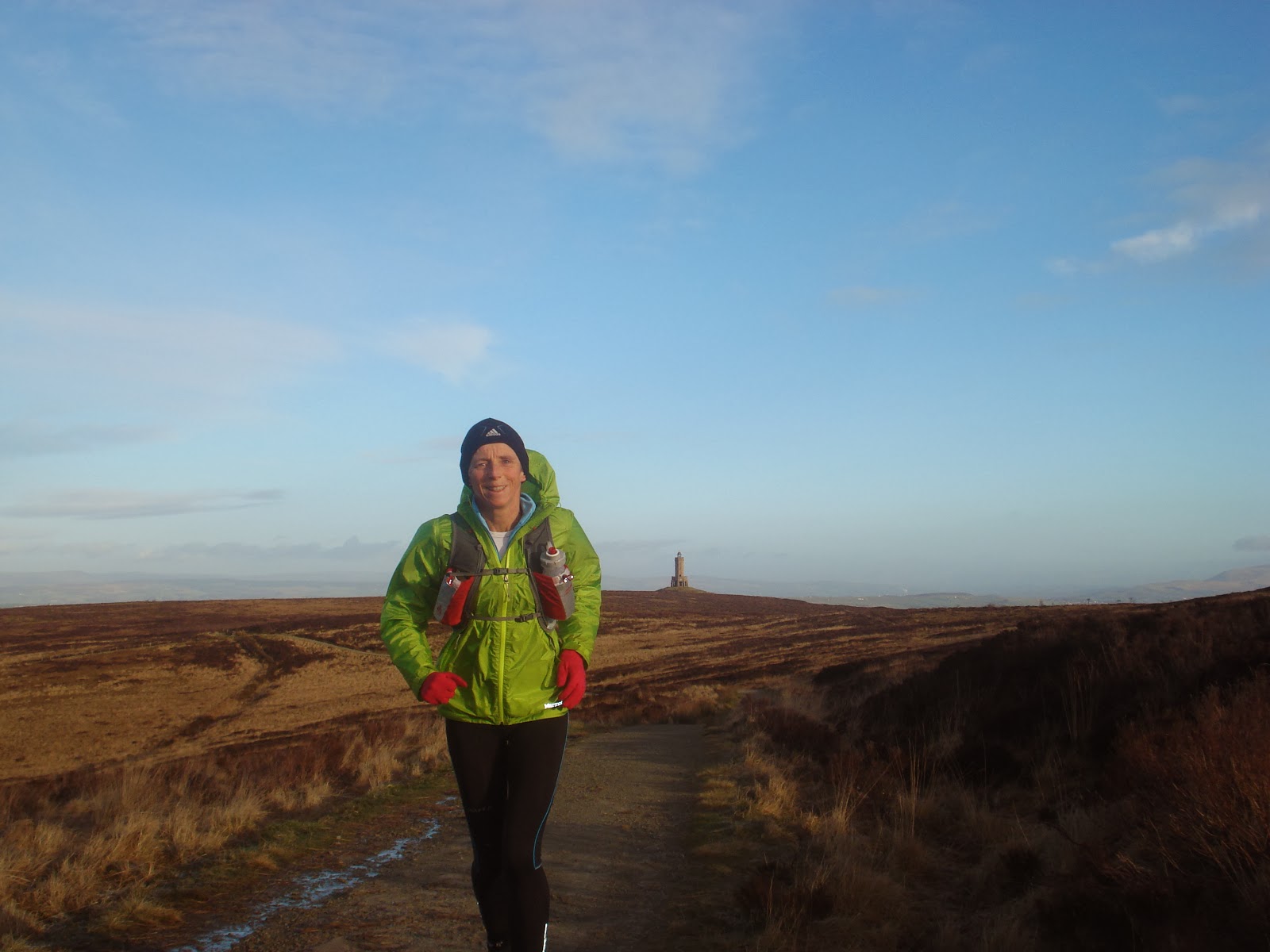 I had managed about 18 miles and just hoped I had not done too much harm. At least I had made the most of the day and really enjoyed my time out in the sunshine. I tried out the UD vest again and it was fine. Still not sure I prefer it to my NF sack or if I need to carry lots whether it will be big enough. I had been driving for less than 10 minutes before the rain arrived; perfect timing. I was quite happy to spend the afternoon indoors watching the wind and rain outside.
Posted by Ultras and a lttle bit more at 13:52 No comments: