End of the - well, end of the Runfurther series

The White Rose Ultra would be event 12 in the Runfurther series.

The pressure was on in oh so many ways. Bob  (and Nick, but I don't  live with him) was hoping to complete his Grand Slam and we had very rashly decided to do the Runfurther AGM and Prize giving immediately after the race. It may not have been so bad if there had been more than a weeks break since race 11 Jedburgh. Getting Jedburgh results uploaded and new leader boards was soon sorted but some positions were still to be decided on the day after the WRU. (I won't be suggesting we do that again).
Bob and I drove across late on Friday afternoon and after coffee and cake were met by Wane who ushered our van into the inner sanctum of the Visitor Centre. It was warm and sunny so we put up the flags and banners at a leisurely pace before retiring inside to admire the building, drink more coffee and talk ultras. We were the first very early runners to register. A few more runners started to trickle in after 6pm and we went out to the van for our evening meal. 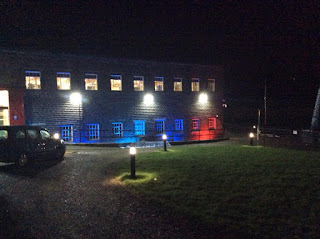 The weather then deteriorated as the forecast had promised it would. The cold and drizzle of evening became heavy rain for much of the night although the wind stayed calm. 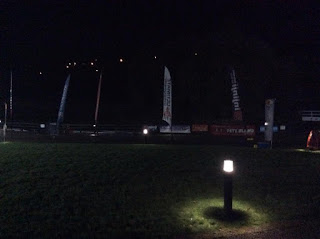 I heard Wane go off at some stupid early time to drive round and check all his arrows were still in place; I just turned over and went back to sleep. By 6.30 we were up, dressed and eating breakfast. I left Bob to his last minute faffing and chatted to runners inside until the heat drove me out into the courtyard. I had been unsure which shoes to wear and I didn't really get it right. My old Scotts are on their last legs but have a roomy toe box. I should have worn them and not worried about the few slippy bits of terrain. Instead I went for the new pair and although they are meant to be the same size they have just never been as comfy. I had to change out of them on H200 and really wished I could today.
I had run the inaugural event back in 2013 when it took me 5hrs12 in fairly grim weather. I could remember more road than I like, some very steep tarmac descents and freezing hail coating me and the road at the top of Wessenden. The rest was mostly a blur now - except the spot where I fell heavily and ripped my tights, grazed my knee and bashed my shoulder. This year the race centre was another new location (it has moved several times as the race has expanded) and the route had some changes too. Sadly the first bit of hillside is now road due to local access issues. 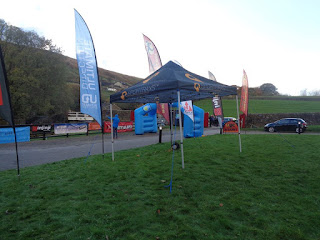 As we stood on the start line the weather was already improving and before the top of the first road runners were stripping off cags. Climbing up Wessenden and the views of the reservoirs and waterfalls is the nicest bit of the route I think. By the time I was on this track I was settling into a steady pace and my foot was behaving; for now. The main road at the top was fairly quiet and we were soon turning off onto paths and tracks again. This year there were so many arrows you could not go wrong so I missed the pavement where I had tumbled. A short road section and we were back onto another track and heading for a little reservoir and a CP. I had opted to carry my own food and did not need water yet. I was surprised that they were not taking numbers. There were other runners around me here but nobody very close. I remember a descent and then a more urban bit, a fork where we could see no arrow and then a climb up to Golcar. My foot was now starting to throb. A lady runner was just ahead and I tried hard not to let her get away. I had no idea how many other women were ahead but thought at least 2 or 3. The eroded cobble path down to the original start at the cricket club was slippery and I was a bit cautious- my toes were now regretting my shoe choice. I almost enjoyed the stiff climb up the north side of the valley but once at the top my foot pain became unbearable. I did try to massage it back to normality but I couldn't get it comfy. I tried to hide as by now there were tears. In the end I gave up and hobbled on. I concentrated on stomping hard up and through the golf course area  and did catch some runners who had passed me. It was a joy to leave the lanes and to climb the very muddy boggy path up onto the bit of moor. Sadly it was over all too soon and we were back on lanes. A gentle descent was bearable but on steep tarmac my toes were now adding to the foot agony. What should have been easy running was torture. I cursed my stupidity and tried to just run through it. I knew there were some even steeper descents under the railway and into the valley where Marsden sits but I had forgotten how cruel the end of the route is. You climb steeply up and up away from the finish (which you can almost see) and then look west for about a mile (well past the finish) before the final turn for home. On this very last bit the woman I had thought was ahead came past being paced by a friend. She had gone wrong near the golf course and had been struggling to catch me up again. Then I spotted another woman- no way was I being overtaken twice. My foot just had to lump it. It was not far to the finish and for 5 minutes I blanked it from my mind. It meant tears and pain on the finish line but I did stay ahead. I have no idea of my time but think it was about 5hrs 20. Not too bad all things considered I suppose.
Once my foot was bearable I chatted to Dick who was handing out spot prizes- Thanks Betadesigns, another much needed pair of Injinji socks. A quick strip wash in the van and I went upstairs to find food and Andy, the Runfurther webmaster. Although not running he had come to update the leader board and sort out today's results ready for the AGM. We spotted Nick finish his Grand Slam and then I waited for Bob. Luckily I was downstairs as he finished and so I was able to get a picture of him and congratulate him on the line. Fantastic effort and our first ever V70 Grand Slammer. A good day for Runfurther- Rory Harris did his 4th race and jumped to 3rd on the overall results, Ken was 3rd and so took overall lead and Kevin although poorly completed the 30 miles and was 2nd overall. Lee who is part of Betadesigns finished 2nd so we need to sign him up for next year.
Once Bob was back Andy started to try to get results while Dick and I went up to the pub to start organising the AGM etc. Martin and Lee were already there. Despite hassle with results the AGM went well- it's fairly short and informal. Andy stood down from the committee but Kevin Smith has volunteered in his place. Then the food arrived- it was worth the wait! The prize giving was awash with Ultimate Direction, Injinji products plus some PBland vouchers.  A few runners were missing due to family commitments or illness but the room was full and lively. 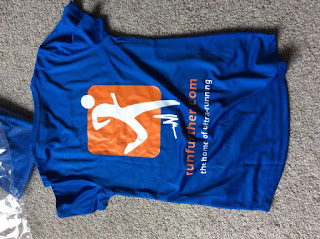 Those runners who had completed 4 counting races collected their rewards- a Giraffe neck tube for first timers and a T shirt for the rest. 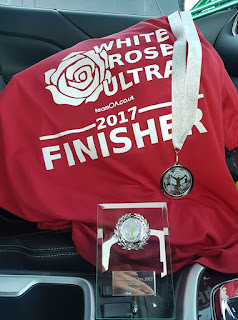 As we were relaxing those on the 60 mile or 100 mile were of course still out and in worsening weather. A special mention to Runfurther runner Steve Spence who completed his 4th 100 miler for 2017 and in a 100 mile PB. (not that we knew this til Sunday).
Then it was back to the event centre for Bob, Dick and I as we still needed to take down all the flags and banners. Phew, finally over and we can relax. Well almost... there were some wet flags to dry first. 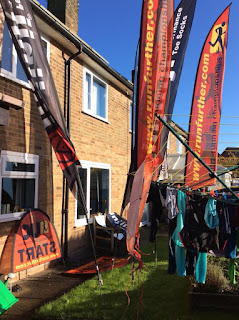 Posted by Ultras and a lttle bit more at 09:48 No comments: