I was starting to realise how broken and tired my body was getting/ had got. Well over 450 race miles since the start of May was catching up with me and some of those miles had involved two day mountain marathons  with big climbs at the LAMM and a solo big pack at the SLMM. On top of this I had fallen at the SW100 and bashed my sternum - not much cushioning there, and then got heat stroke and food poisoning after the Dales Way. I wasn't in the best of shape. 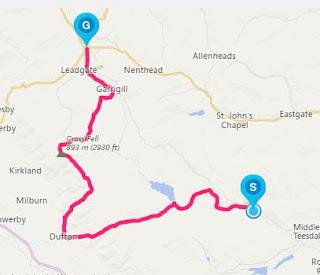 Still, Pennine 39 was not so long and is such a lovely event that I was determined to give it a go. After all, I didn't have to win. An early start saw a brief shop at New Balance in Shap and we were in Alston far too early. The YHA was not open for us for hours and then the rain came and scuppered any chance of a pleasant walk. We sat in the van with big mugs of coffee and read. By 6pm the rain had stopped, Nick appeared and we put all the flags and banners up. Registration was short and sweet so we headed for the pub with Chris and Carol.  Bob and I had already eaten but we did polish off Carol's chips. Saturday had a leisurely start as the bus was booked for 8.15am. 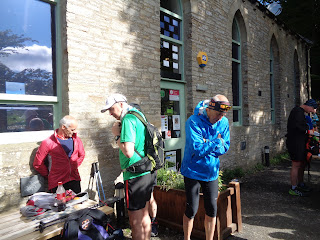 The race may have only had a small entry but it was lovely to see so many friends- Mick, Charlotte, Dick,  David C and so many more. We chatted on the bus and then more at Bowlees as we tried to find sun and shelter from the wind. 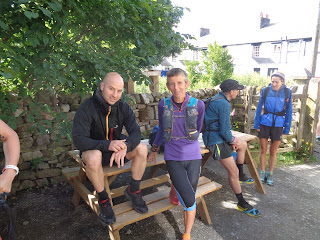 It was chilly but was going to be a warm sunny day. Dick had not run for weeks for political reasons, Bob was aiming to complete and keep his Grand Slam alive, Mick had been injured and was hoping to finish with the aid of poles, Nick was depressed at his recent race efforts and I knew I would struggle. What a bunch! 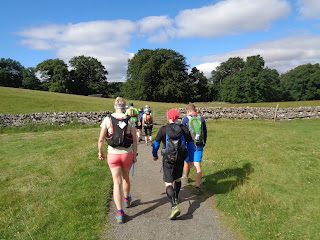 This year we started just the other side of the little suspension bridge out of consideration for the sheep we scared last year and the damage us running over the bridge en masse might cause. 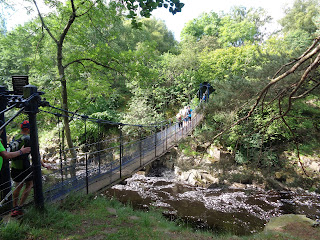 A quick detour for a picture of Low Force and we were off. 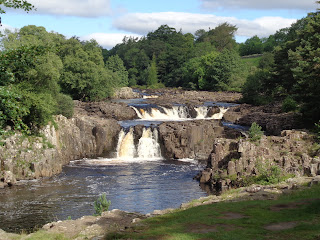 It was not long  before the fast runners were flying ahead. David Chetta and Chris Davies disappeared and Lucy bounced past keen to keep them in her sights as she did not know the route and was worried about going wrong. I pottered on and settled at a reasonable pace for the time being. 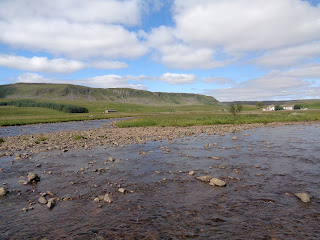 Before the valley opened out Casia overtook me and a couple of men went past too. We leaped-frogged back and forth until the valley narrowed and the rocks appeared. 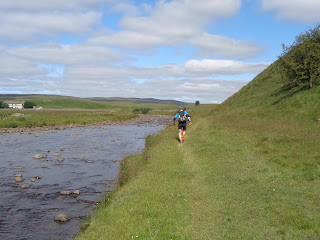 It was dry and I felt sure footed- ha, ha. Rounded water polished limestone got me. I twisted my knee and landed on my thigh giving it a dead leg. Damn, that was all I needed. 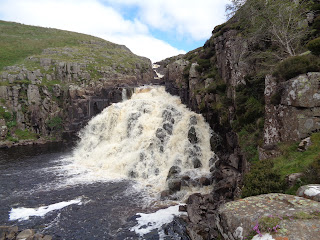 I dragged myself to CP1 above Cauldron Spout and onto the reservoir dam. 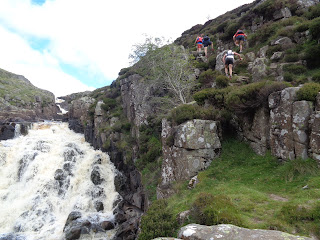 The next section was a struggle. Bits hurt and I was too tired to run hard anyway. At least it was sunny and the views were amazing. 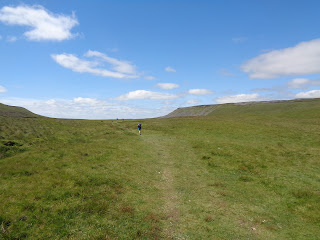 I trotted on towards the amazing High Cup Nick in my own little bubble. The awesome view revived me and my leg felt better allowing me to make good time on the descent to Dufton. 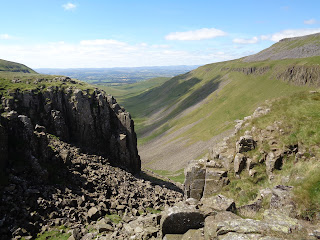 I was amazed to arrive there and find Casia and the others still there. 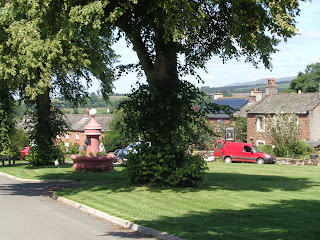 A cup of tea and food plus a top up for my water bottle and I set off feeling a bit more positive. 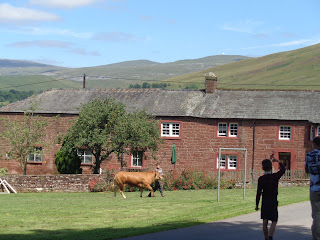 I felt slow climbing to Knock Fell but could still see others up ahead and even overtook two runners. That was the worst of the climb over and I enjoyed the ups and downs of Great and Little Dodd Fells and even the final pull onto Cross Fell.
It was sunny and warm but not too hot. This year I knew what to expect as I left the summit cairn and headed for Greg's Hut. I am not sure I found the best trod to cut the corner but it was OK and the big track didn't seem as nasty as I remembered.  This year at least I knew it was not just downhill! I couldn't see any runners for a few miles but was happy and ticking off the miles. Suddenly up ahead I could see a runner. It took a while to decide who it was and then a fair bit of self control not to race to catch them up. Gradually I eased closer. yes, it was Casia and she was hating the track. I overtook her before Garrisdale and did my best effort of speedy jog through the village to the CP at Tom's van.  More food and water was just what I needed but I was very shocked when he said I was first lady. No way? Where was Lucy? Apparently she had turned left not right after Cross Fell and was exploring Kirkland. Heck, that's a big climb back up and over. The downside was it meant race on and I now needed to make a proper effort. I had no idea how Casia felt now she was off the gnarly track and I did not stop to ask. The grassy river side paths were great and only one particularly high stile threatened to break me. I knew the way and knew just how far was left. A couple of cautious checks showed me that she was not close behind. 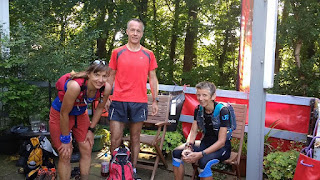 So a totally unexpected win. Casia was about 7 minutes behind so either I ran well once the end was in sight or the track broke her spirit as it did mine last year. It took me some minutes to recover and then feel so sorry for Lucy. She is a far better runner than me and should have won by perhaps an hour.

My time was about 20 minutes slower than last year; not as bad as I expected. Nick got a PB so was all smiles. Mick completed and was OK. Dick completed the shorter route on no training and for Bob the Grand Slam is still on. Chris had a storming run and was first V40, V50 and V60. David Chetta was 2nd despite the SW100 in his legs. 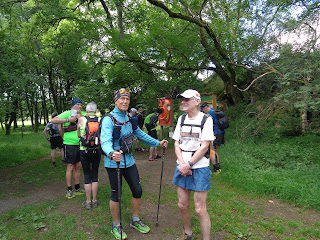 The evening was laid back, sociable and fun. A huge meal- well huge for me as I had already had two bowls of Vav4 soup, bread, cake and nibbles. The lasagne, baked spuds, salad, wine, pudding etc was superb. Joe knows how to treat runners.To finish it all off we staggered to the pub for a free pint of Pennine Ale. Perfect.

The race did also teach me that my body was really tired. My twisted knee complained for days and by mid week I knew that to try to race the LSU would be a mistake. I wanted to enjoy it, didn't want to be timed out or to hate the day and was conscious that we were off on a walking holiday only days later. I was disappointed but knew it was the correct decision as I sent the email to Charlie explaining. It did mean he got more volunteer time! 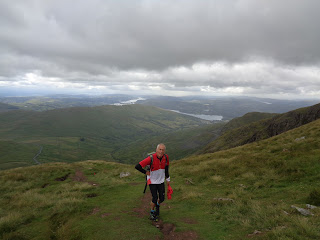 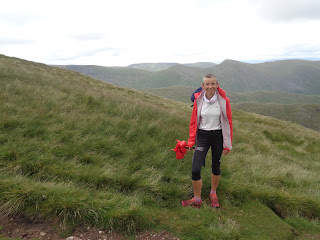 Bob and I flagged the course from Kirkstone up Red Screes and down to Ambleside on Friday. 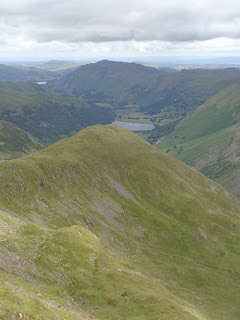 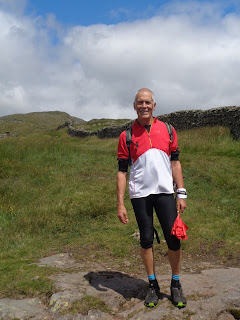 Saturday was very low cloud and constant heavy drizzle on the tops. After manning gates near the start we flagged the Scafell Skyline from Harrison Stickle to Ambleside.(no chance of photos that day but I did drown my phone). 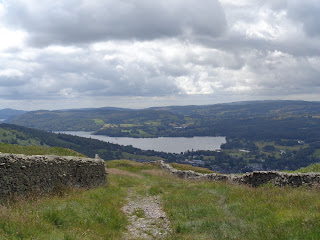 In the bad viz we did lots of running backwards and forwards finding the best lines and checking we were on route.Then a mistake on Loughrigg added a mile or so. 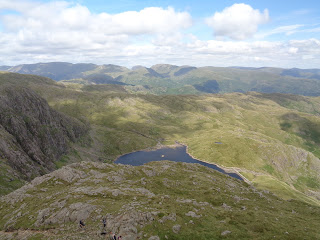 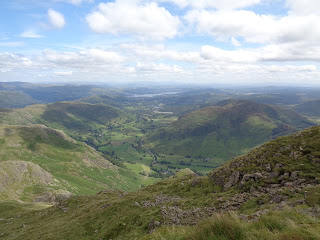 It was a long day. Sunday had a leisurely start in Langdale before sheep herding, NT car park duties, setting up the CP and sunbathing. 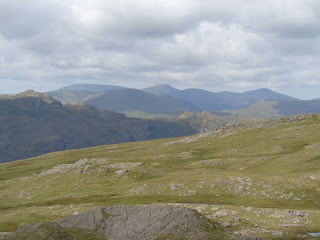 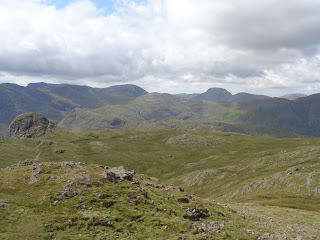 Then a change of plan saw me manning the Harrison Stickle CP with Janek before stripping the course and sweeping to Silver Howe and dropping to Elterwater to find Bob and the van. 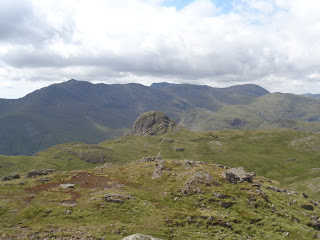 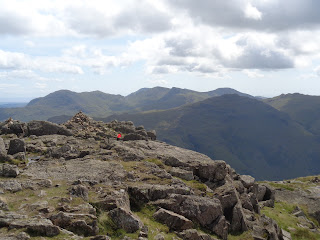 No racing but plenty of outdoors, some running and very mixed weather. Nice to volunteer and to give back to ultra running plus I got to make some new friends and have a great time helping out. Maybe next year?
Posted by Ultras and a lttle bit more at 13:34 1 comment: