Prompted by John Kyntson's review I thought it might be worth having a look. It seems it was a satisfying but mixed year with more and more injuries as I get older.
First off was a race in NZ - St James southern Alps miler (100 miles) which was my first ever ultra DNF with a medical issue at 52 miles. It was the correct decision to bale but it took 48 hours of tears and a week before I was over it.
Back in the UK I was asked to make up a scratch team for the High Peak marathon- another adventure into the unknown. It was brilliant and our team were fairly evenly matched so it was good fun .. well except perhaps for a few stretches on Bleaklow.
At Lakes Mountain 42 I had a reasonably good run considering how little I had run over our winter in NZ when we were busy with big walks and kayaking. There was only one small return of the 'not a hernia' pain under my ribs and 4th F was OK.
Calderdale Hike would follow the same route as the previous year and so I knew the way. Sabrina was there and it was good to see a younger female challenging for the Runfurther award. She would have been much more then 30 mins ahead of me if she had known the way. As it was the day was glorious and I finished inside 7 hours.
Next up was the Fellsman- my 7th at the race. I always enjoy this event even if at times it makes me suffer. I managed 3rd F and we got the old people's team prize! Unfortuntaley it left me with a very fat ankle by the next day. 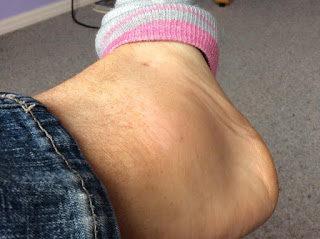 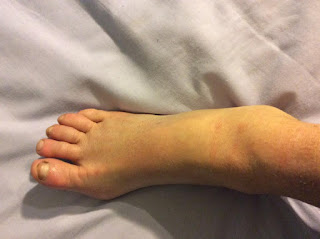 By morning my right foot was huge and several bits on the outer side of it were incredibly painful. Oops. It went down but the sore bits were still sore. Local runs on flat tarmac showed I could still run after a fashion. Last race was Tour de Helvellyn which I love. I had no idea how far I would get but set off to see. I was ridiculously cautious on the descents and rough ground but pacing myself seemed to work well. I never felt totally shot and despite a tumble on the return loop to Askham Common I managed a PB of 7.55. I have never been under 8 hours before and the conditions were probably the best yet.My joy was short lived and completing the race has not helped my foot/ankle at all. Doing RED in Dec was not the best idea either.
Strava shows 551 hrs and 3313km of running with 183 personal records. The graphs shows a very unbalanced year but I guess months in NZ, climbing etc most of the summer mean it was not just running that got my time.

I have started 2020 injured and reduced to easy climbing and cycle rides in the hope that it will improve enough for me to make the most of my plans for the year. 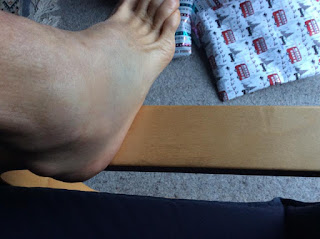 
Posted by Ultras and a lttle bit more at 07:26 No comments: