2018 A year full of uncertainty

It is almost the end of January and I have not run much and have entered very little. I feel in a sort of limbo state. I know I cannot just ignore my foot but trying to get it resolved is making me wish I could just ignore it and hope for the best. I was told to expect an MRI appointment in early/mid Jan so we didn't go skiing, just in case. The NHS 'crisis' soon meant that date seemed unlikely (and I am not complaining as meant patients are much worse off). Then a date of 28 Jan appeared - but it is now too late to ski this month and the consultant appointment is 8 Feb so now space in between and then it is half term...... you get the idea. Oh and I had some sort of flu/chest infection that has left me weak and coughing. I have entered The Northern Traverse in May )as I had a discount from marshalling) and really want to do it but I have no idea if my foot will be solved by then, nevermind the lack of training in the run up.  Uncertainty is starting to get to me.
On the plus side... got to look for the positives.... my frost nipped toes seem to have recovered, we have joined the climbing wall and gym so can go daily for no extra cost. This means my climbing is improving and I am discovering exercises I should be able to do to stay fit even if my foot is operated on.
I have been out for a few slow runs- checking out the new Calderdale Hike route, checking street O map and controls plus an attempt at a long hill run when I had to sit down for a rest! Then I spotted a race entry for the Hebden on sale. OK, lets give it a go. I have done this twice before but not for 4 years. I looked up my times; 4hrs 13 and 4 hrs 22. Surely I can manage to run slowly for that long.
The forecast deteriorated as the week progressed so Bob decided not to come and I cannot really say I blame him. So instead of being in the van on Friday night I drove across early on Saturday. I didn't sleep well as I think I was worried about icy roads.  By 7am I was in a very icy Mytholmroyd car park and skating my way to the church hall. I was early enough to treat myself to tea and toast and still have time for a toilet visit before the queues. 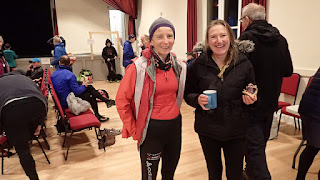 Chatting to so many friends meant it was very soon nearly 8am and time to move outside. The start is now round the corner in the station car park. It  was nippy but not freezing. I probably had too much clothing on but was worried that I might not be moving very fast. It wasn't long before Albert came skipping past and then Josie and Tony shot off too. I settled into what I thought was a comfortable pace for me but was struggling a bit even this early. As we climbed towards Old Town I felt better and ran more, except where I feared black ice or slippery bits.

Somewhere on the next section I skidded a bit and pulled my groin. I stopped to rub it and bending over set off what we think is a hernia, twice. I tried to run but it was run a bit, walk a bit all the way down to Hardcastle crags and along to Gibson Mill.
People I can usually beat came running past but there was little I could do. I thought about stopping but I was sort of enjoying the snowy scenery and decided to try to jog round the best I could. It was interesting running with different people for a change.There was a guy in shorts with tattoos and I made a plan to stick with him.
I almost went wrong as I missed a sneaky left turn but luckily a runner shouted. Then on the concrete track down to CP3 I had to stop for a pee.
My groin and abdomen still felt a bit dodgy at the CP so I grabbed a piece of cake and dashed off before I could decide to retire there. Shorts man was still in sight and I worked hard to keep it that way. He got ahead as I stopped to chat to Dave Bradshaw who must have wondered why I was so slow, walking and even happy to stop and chat. 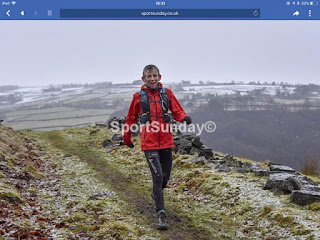 Climbing up onto Stoodley Moor I started to reel in a few runners and this lifted my spirits a little. 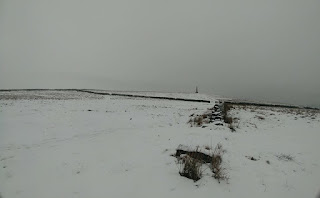 The tops were snowy but I was cosy and concentrated on chasing the shorts as I wasn't sure I could remember the way into the woods. The woodland path was a bit slippy and shorts man got away. I left the CP where the two routes diverge alone and hoped I could remember the way. Luckily yes and then I caught my friend again. We ran together through to the pub at Crag Vale and up onto the final moor. Julian was taking numbers at the CP and I was starting to feel better. Then as I rounded the track bend I spotted orange fluro shorts and a white cag. It had to be Nick. 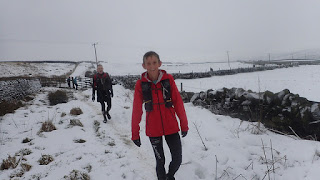 This gave me another boost and so after a quick photo I shot off running. 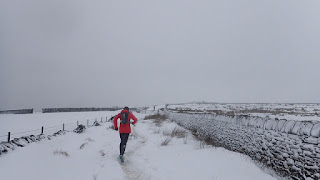 Next I spotted Wally who had earlier commented that I must be taking it very easy if he was overtaking me. I managed to stick with him all the way to the end but couldn't quite bring myself to try hard and overtake him on the final road.  As we started to descend to the valley the snow vanished and the thick mud began. 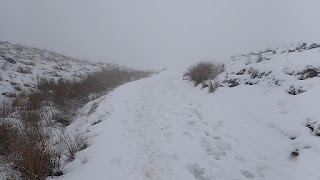 Contouring along the final scarp edge was interesting as was the final footpath before the cycle track. Here I spotted Linda ahead. I was now boiling but too close to the finish to fret about taking a layer off.
The time was a PW by almost 20 minutes but at CP3 I expected a PW of over an hour so I guess I did make up for some lost time. Tony finished in 4hrs 13 (my fastest time) and Josie in 4hrs 20 so perhaps the mud slowed us a bit. Given how much I walked in the middle section I was surprised not to be further behind.
I took my time eating, drinking and chatting in the hall. Where else can you  have mulled wine, pie and peas, a huge apple crumble and custard and also have your empty plates whisked away. I was finally introduced to my double. 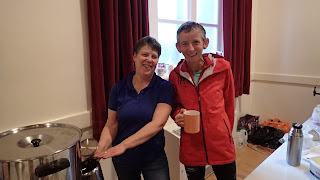 I knew there was another Karen Nash and I knew we even had the exact same birth date as it had caused confusion with results and a race entry in the past. It was lovely to meet her and chat.
I couldn't face walking back to the car for a shower and then back to the hall to eat and then back to the car to go home. A quick change into warm dry clothing on the stage had to do. Driving home the sun came out! and then my foot started to hurt. At first I was worried the frost nip effect had returned but it seems it was just the mortons neuroma? and a very bruised big toe nail. I seem to be collecting injuries and if I was a race horse they would have put me down by now. Still, I enjoyed my day out and was glad I hadn't given up. Something about being out on the hills even in iffy weather always makes me feel better about everything. Putting climbing shoes on tomorrow should be interesting though.I think I have missed Rombald's entries but the next LDWA should be Anglezarke Amble and then maybe Peeler's and Two Crosses.

Posted by Ultras and a lttle bit more at 08:34 No comments: