Round Rotherham
This would be my 8th running of this event and my 6th in the Runfurther Champs (which is pretty good considering how much time I have been out of the country). I knew It would not change my score in the Championship and as a consequence was struggling for motivation as we stood on the start line. The whole RRR organisation is superb and the race is really good value. It is also fairly flat and fast which does not exactly play to my strengths.
We started from a new venue this year, Mavers Boatclub and it was a pretty setting on the lakeside. It also meant we were straight onto trails rather than the road and tarmac cycle was from the Sports Centre, those would be at the end this year. The forecast was good but not too sunny and I was assured there would be very little mud even on the ploughed fields. 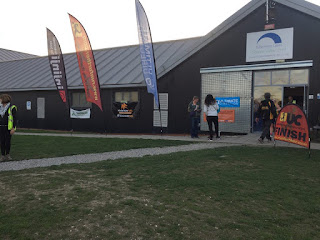 The lead men soon disappeared into the distance and the rest of us settled into our natural pace and positions. By Elsecar it was warm and I had to take a layer off. Heading up into the woods I chatted to Ellie, the local girl who had beaten me by a couple of minutes last year. She was running with two guys but was carrying absolutely nothing. I ran a fair way with Les Hill. He raced ahead on the flats and I caught him on the hilly ups and downs or any rough bits, until his legs objected and reminded him of his recent 6 hour race. Having the slower runners and walkers go off an hour earlier is quite nice as you can slowly pick them off. I passed John Vernon at Keppel’s Column and then Bob and Dick as we joined the canal and the delights of Tinsley. I was pleased with my progress and now had my race head on as I ran past Orgreave and noted all the new houses in the distance. CP2 was welcome as I was low on water so I also grabbed some food to keep me going. I like the next section past Treeton Lake and towards the railway viaduct and Rother Valley Park. My foot was now causing me some issues after all the firm surfaces and I did have to walk some short sections here which was frustrating as my legs felt fine. I knew from experience that some walking would help and then we would be on the field paths again through Woodall and into Harthill. This CP is almost half way and I have wasted time here before. Not today though. A quick refill of water and two jaffa cakes and I was on my way. Sadly I found the film tub of mountain fuel had lost it’s cap. Sad because I wanted the energy and worse because it left a sticky mess where the powder had spilt and got damp. I managed two of my marmite sandwiches instead. Less than 10km would see us Woodsetts which I think of as half way even though it is 47/80km. The fields in the next section were beautifully dry and compacted and still had more crops rather than the ploughed mess of some years. The turbines came and went, the light aircraft buzzed us and suddenly I seemed to be almost on my own. It was warm and I had hoped to refill my bottle at the unofficial drink station by the canal but for the first time I can remember they were not there. The relay runners were now coming past at a steady pace and mutual congratulations also help lift my pace plus the golf course section has some softer ground for my poor foot. A short steep uphill and we were racing down to the Butcher’s Arms and the CP at Woodsetts. I had decided to stick some food in a drop bag this year but no change of socks or shoes. Last year I wasted almost 15 mins faffing. Today it was a cup of tea, more marmite sandwiches, two baby bel and a restock of Mountain Fuel Sport Jelly. I was first lady but had no idea how close Ellie was or if she was gaining time on me. There was nothing for it but to keep going as hard as I could. 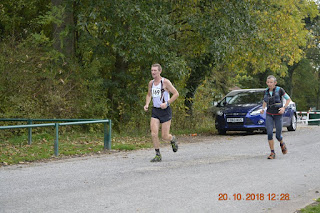 Les set a good pace around the fields at into Langold lake park. The following woods used to be great but the path now has an uncomfortable covering of gravel chippings. I concentrated on not letting him get too far ahead and we arrived at Firbeck together. I over heard a rumour that Ellie was two minutes behind me so after a refill of water and Mountain Fuel I was off and heading for Roche Valley and the abbey ruins. Surely after 35 miles she wouldn’t catch me now. Red vest man aka fastest fat boy (his words not mine) was running with me now and we made very good time to Maltby. 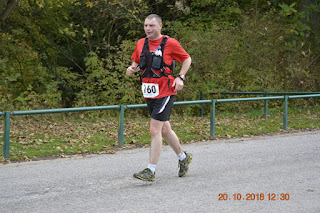 He seemed keen that I should not be caught. The roads through Maltby were hard work as usual but the track past the odd little trig point and Micklebring came faster than expected. More relay runners dragged me under the M18, across fields and down to Hooton Roberts. I was now checking Henry’s strip maps frequently to check on the passing and remaining kilometres. The 2km to Old Denaby flew by as I tried hard to reel in red vest man again. From the last CP I knew it was less than 5 miles even with the new venue. I met relay folk running back to cars and others out supporting. Several were Kimberworth Stridders and I hoped Ellie was not getting too many updates on how far ahead I was. In my memory the canal and paths to Swinton and then the Sports Centre go on a bit but today they flew by. I was desperate not to lose my position after all these miles. From here it was all tarmac for about a mile. I focused on counting roundabouts to take my mind off my foot until I could see the Fire HQ and knew I was safe. I did slow to walk at that corner but managed to run into the finish. 8hrs 41. 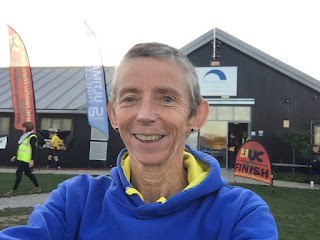 Feeling better after food and a hot shower
Not a PB as I have run faster in 3/8 years but a whole 45 minutes faster than last year. Ellie appeared about 15 minutes later chuffed to have beaten her last years time by about 30 minutes.
The real glory goes to the local man who set a new course record of 6hrs 52 seconds! And Ken, Kevin, David and the others who were way ahead of me as usual. 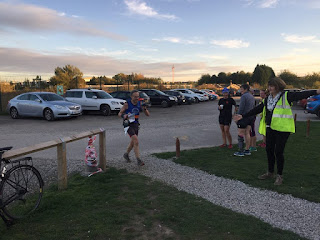 Nick finishing
Food and a hot shower soon refreshed me and several walks back to the van down on the lakeside loosened my legs.
A seat in the sun watching the light slowly dip over the lake was a beautiful end to the day. 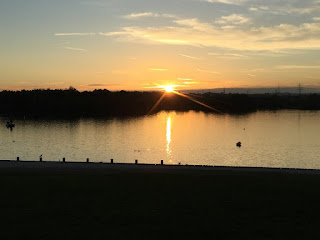 Catching the last rays
All the flags and banners were down and safely stowed soon after dark and I settled down to wait for Bob and Dick. The race was important for them and would decide who will be V70 champion. 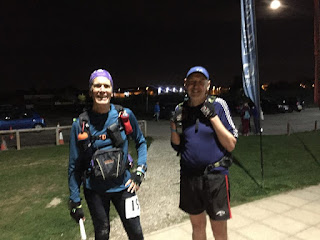 Bob and Ian
The new venue worked well. RR is much more scenic than it sounds and a great place to get a 50 mile PB. (I was almost 2 hours faster than at Red Rose 50)

Posted by Ultras and a lttle bit more at 07:10 No comments: