So where have I been?

I have run since Round Rotherham but not much. The last real race was at a Peak Raid mini MM in the Peak District in November. It was damp, cloudy and a bit chilly but actually I ran quite well and was pleased with my choices, timing and my overall points.
The nav wasn't perfect but then I am not orienteering much anymore so it was perhaps to be expected. I even beat some fast male runners who were over ambitious and so lost points- I will probably never beat them again and certainly not in a straight running race.
Then we disappeared to the southern hemisphere for 3 months. In Australia I didn't really run except for some short runs on the beach. I did try open water swimming but much as I love swimming in lakes and rivers and playing in surf I think swimming in the ocean except as fun is not for me. Bold and beautiful do early morning Sunday swims from Manley and it was great to take part and the cafe breakfasts afterwards were even better.
Once in NZ I did run a bit but very little really. A drizzly rest day for Bob saw me run the Puke Ariki skyline behind Lower Hutt again and I had a few other short runs but nothing serious.
I really wanted to enter one race whilst we were there. Tarawera was my favourite but the $800 entry price soon put a stop to that. I then found the St James miler (100 miler that is) and it seemed like a good idea.
It was based just outside Hanmer Springs in what looked to be a lovely area and sort of fitted with our holiday plans. After quite a bit of indecision I entered. It was a big learning experience and my first ultra dnf. It was taken some getting over; and even now I keep replaying the day and wondering if I made the correct choices. Lots of lessons learned.
Preparation for the event went OK really although we were on holiday and doing kayaking and walking rather than running. I wasn't too worried and didn't think I would lose fitness that quickly. I did struggle to find some ultra food for my drop bags - no UHT custard, no For Goodness shakes choc milk and more. This was to prove quite a big issue as the CPs had almost nothing.
I had sort of checked the route the best I could from the satellite image and trace on the website. I had a very rough idea of the route. I knew it only had 3000m of climb which seemed very little compared to most 100 miles I have done. Maybe this let me assume an easy race and faster time?
In the end it meant I felt I should be running lots and I perhaps went too fast too soon. We arrived several days before the race which is just as well as the start, and finish, were about an hour up a dirt road (sorry hire car company).

We camped at the start next to the historic Fowlers Hut and DOC loo. Couldn't sleep in it as there were birds nesting in the chimney and mice under the floor boards.We receed the first section up to Fowlers Pass which was on a good path and beautiful.
The climb didn't seem too bad and I also got an idea of the valley and grass 'flats' at the bottom. We also recceed the last 16km loop and were fairly sure we had found it OK despite the path being called something that none of the locals had ever heard of and neither had any of the noticeboards or maps. 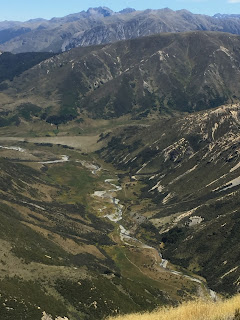 I knew now that only 7 had entered the miler- 5 guys, Lena and I. 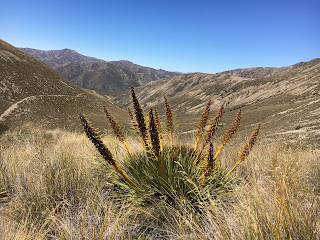 We met Lena when she came to scope out the start and I had made contact with Ben via facebook. He came second in the end.
It was an early start and the registration was a bit chaotic. The RO had been ill and turned up about 10 minutes before the start. We did not get our correct start bibs and more importantly we did not get the promised maps. I am happy to navigate but I do need a map to be able to do so! This stressed me.
The drop bag situation got a bit bizarre and the website had some conflicting info. I had made my choices by then and there wasn't really much chance to change things. We had emergency locator beacons and knew there would be some support vehicles out on the route plus the CPs. For CPs I imagined a manned post with some shelter and perhaps even somewhere to sit. Ah well no. Some were tents with a table across the entrance and perhaps some sweets, water and energy bars. Others were abandoned Land Rovers with our drop bags cooking nicely on the open tail gate and even less shelter. Then came the kit. I assumed the compulsory kit was just that. There was no check and people started debating what we didn't need to take as the forecast was good. Again I had made my sack choice based on what I had to carry and there was not time to change it now. More stress. 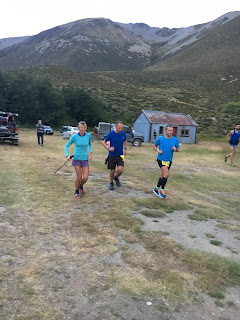 So what were the lessons.
1. Prepare better in terms of what to expect from a race and don't allow anything to be left to chance even if it means providing your own maps.
2. Don't make hasty decisions; review all the options. Talk them through out loud or even write them down. Once I had had a cup of tea and a rest I was feeling a bit better. The heat was going out of the day. I could have waited and eaten.
3. Don't decide to quit on the way INTO a CP.  I had enough time for Lena to catch me up and then to go with her. I even had time to go an lie down for an hour or so and then decide whether to continue.
4. I had visions of my fastest 100 miler yet. Ha ha. Perhaps a slow time would have been better than a dnf.
5. Written notes for your drop bags reminding you what to do etc. This worked well for me on the Northern Traverse. I should have done it again Also write on your hand... eat, drink, enjoy....
6. Expect the unexpected. I was worried about having soaking wet feet all day but they were fine. I was worried at no real running for 6 weeks but my legs were OK. My dodgy foot was OK and behaved thanks to the mostly grassy paths. the heat was awful but the hernia was the real issue. It had never happened DURING a run before. (and has not happened since)

So did I do the right thing or did I 'bottle it'?  I know the lack or route marking was making me wary. I know the lack of map really stressed me. I know not having enough of the right food didn't help. Why didn't I wait for Lena? Why didn't I aim to get back down to the Henry CP? or even to the Lake Guyon CP?
It took me several days to get over this and there were some tears. In the end I told myself it was ridiculous and to get a grip - it was after all just a race and really not that important in the big scheme of things. Yet I am not truly over it and still question my decisions.
Perhaps I need to go back and do the race in two years time now I know better what to expect. maybe this will lay the Ghost.
Now for the rest of 2019. Living out of a car, a kayak and tent in the wilds of NZ meant I forgot to enter the Haworth Hobble and so I will miss the first race in the Runfurther series for the first time in ten years. Disappointing but my fault. We have entered many of the others and I hope to do 8/12 in the series. We have also entered the LDWA 100 for the first time, plus I have entered the GRP 220km and hope to get an entry for the Tour De Geants. Time to stop moaning, worrying and to get running.
Posted by Ultras and a lttle bit more at 08:01 No comments: