It's been a while

After a big summer race It now seems ages since I really ran. I loved supporting Bob on the Hardmoors 60 and we have also supported for the weekend of Lakes in a Day. In between times we had a fortnight in Scotland- mostly on Skye walking and scrambling.
There were not many opportunities to run in this time but also my foot is so sore that I sort of lost the love. I can do shorter runs from home and at under 2 hours my foot generally behaves reasonably well but it doesn't really inspire or enthuse me. It should have been a joy to run from Oddendale near Shap but after 2 hours I was struggling and frustrated. I did enjoy a run back along part of the LIAD but it was not really pushing myself as I knew I had to get back. With all this at the back of my mind I knew Round Rotherham would be tough. I think it is quite a tough race anyway as it so fast and flat , with no hills to stomp up, that I feel I should run every step.
I do like this race and wish more people would give it a go. It is much more varied and scenic than it sounds, the RO team are great, the CP staff very helpful and you get food at the end. The timing is Si now so results and split times to CPs are instant. I think it is about my 6th running of the event. It also has an interesting set of race maps- not sure if Henry's strip maps are unique or not but I love them.
We drove across early on Friday and after a quick lunch in the van spent a lovely afternoon walking along the track to Elsecar, exploring the historic sign boards that I never usually get the chance to read and then collecting sweet chestnuts in the woods. We did also try out various garmin nav devices - I think I prefer to make the best I can with map and compass; the tech got me more stressed and that was without the dark, pressure of a race and tiredness. 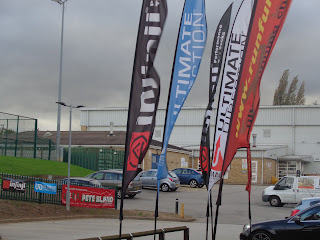 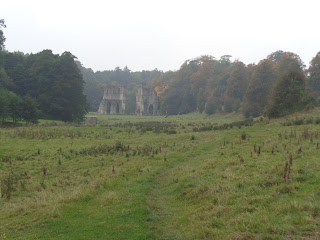 I love that section and it is probably the most scenic. We ran the last section of woods and then the fields to Maltby together. I had not realised when I met her last year what a running legend she was until I arrived home to an email from Wendy Dodds who was so impressed that I had beaten her she had taken time to write to me. Today we laughed about this- Sharon is modest- as we drank at the CP.  Maltby means under 10 miles to go and this always gives me a boost.  First I pulled ahead and then sitting by the lonely trig point Sharon came past. 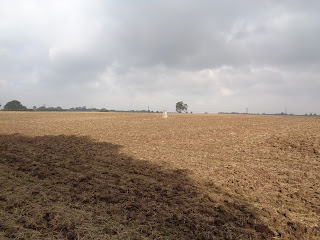 By Micklebring we were together again and it stayed that way under the M18 and across the first fields. Her husband also told us we had closed ten minutes on the lead girl and that she was only about 3 minutes ahead now. We had our first nav blip here. We have both done the race a number of times but the fields were freshly ploughed and harrowed and some hedges seemed to have gone. there was not the faintest trod leading to the bridge over the disused rail line cutting. We didn't hesitate long but it was unnerving. From here I pulled ahead very slightly and when I turned round at Firsby Hall Farm and again at the gap in the hedge I couldn't see any more runners. It boosted me a bit and I shot off down the only mud of the whole day to reach Hooton Roberts. Across the main road and climbing the lane I spotted three 'faster' runners painfully making their way up. I used each on to pull me on- and did try to give encouragement in recompense. I now had the strip map in my hand; not because I would get lost but I was ticking off the km and playing mind games with myself. The run down the field to Old Denaby is a joy although I did lose several minutes asking a marshal to dig gels out the bag of my pack. I should have done it myself. 5km to go, how hard can it be. I was fortunate to have a relay runner with me as we headed for the railway and canal. It spurred me on. The river section was kind to me feet and was over in a flash. under 3km left as I ran down the steps and towards the dead end canal. I had a short walk leaving Swinton but then the last km was flat and easy.  Not a great time and 45 mins slower than last year but I was pleased to only be 3 mins or so behind first lady and 4 mins ahead of Sharon.

My foot was complaining and would do so for hours but it had allowed me to race and I was happy. I used the chrono on my watch to record all my  foot massage time and it was 42 minutes so in the end not so different to last year. I had thought the dry ground would make for fast times but it seemed that the heat and humidity had more than countered this with many runners about an hour slower than usual. I didn't run with my camera so finding some photos will be a challenge. 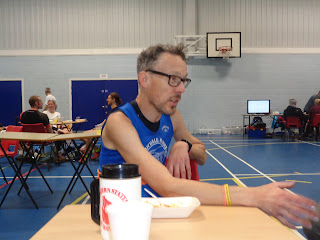 The lead runners Ken Sutor and Kevin Hoult had long gone but it was nice to eat, drink, chat with friends and then wait for and welcome home other Runfurther runners.
Bob and Dick were back in the dark but luckily I was outside dealing with flags and banners so I met Bob on the run in. 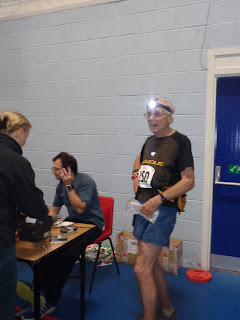 He and Nick both completed so their Grand Slam plans are still on course. 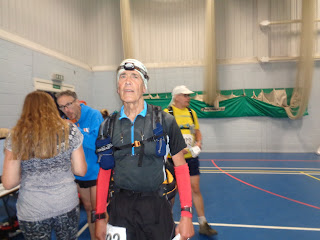 Posted by Ultras and a lttle bit more at 12:46 No comments: