I love the Fellsman. The route is superb with wonderful hills, views and countryside (almost no road). The organisation is great and so friendly and it just seems a really good value weekend and chance to catch up with so many friends.  I felt rather under-prepared but decided to think of it as my last long run before the NT.

By Friday tea time all the flags and banners were up; a task made much easier this year thanks to the sturdy new school fence. More importantly the rain had stopped, the clouds had cleared and the sun had come out. The forecast was good- cold but dry, well maybe not dry from the shins downwards!
The display boards were up inside and I used that as an opportunity to sneak in and be first for kit check. It meant I was able to hand out mint cake and sign up a couple of new members. Suddenly it was gone 7.30pm and time to drive to Ingleton to eat, put up a couple more flags and banners before an early night. I didn't sleep well which was annoying but not all that unusual. Bob met up with Alison and Jo before heading off the man the Whernside CP.
I had plenty of time for multiple toilet visits and catching up with so many friends. It was nice to see Mark Hartell and let him know that Runfurther was still going strong - I even ran with him off and  on as far as Blea Moor. In the hall before the start Julian asked me to be part of an oldies team which was nice. I had contemplated running with others for a social time but the Hardmoors gang would be going more slowly than I wanted and the Lostockers had a neat team of four. I decided to play it by ear and just run the best I could and see who I ended up near.
As usual the field split into at least 3 groups as we left the playing fields and by the Ingleborough track runners and walkers were well spread out. To take my mind off the climb I chatted to Mark. The top was cloud covered but not the white out from two years ago.
A neighbour was clipping tallies and shouted support. I always lose quite a few places descending to the Hill Inn and although the rocks were a little drier this year was no different.
I must check out the more direct grassy descent at some time because Rachel went that way and caught me. Initially I was thinking "where did you come from? how did you overtake me?" but we ran the rest of the race always within sight of each other, grouped and in quite companionship which was lovely. I felt OK going up Whernside to get my tally clipped by Bob et al. Running up and back down this ridge is always interesting as you see who is ahead of you and who is not far behind. Three ladies, including Carol M, seemed to be going strong and I was pleased there were some younger and faster runners this year. Kingsdale appeared very quickly and I refilled my water. I was eating my own food as I find biscuits and the flapjack too dry when I am running. The route to the gate/stile was well marked and let to a good quad bike track. It was wet underfoot but the whole hillside is and the line was better than more direct ones I have taken in the past. I slowed going up Gragareth and told myself it was OK to conserve energy for later. For the first time in ages the cheerful joking ladies at the CP were able to stand outside their tent and enjoy the views. I found myself alone on the section to Great Coum. I could see runners ahead and behind but nobody very close. It was boggy by the wall and the worst stretches kept breaking my pattern and slowing me up. I went slightly too far right dropping off the hill but it allowed me a quiet toilet stop before blasting down to Flinters Gill and running with Mark again. The rocky track was as bad as I remembered- apparently there is a grassy path in the field so I must investigate.
The cheese and onion rolls were very welcome at Dent and the melon and oranges were superb. One third of the race now done.
Mark made better time than me along the lane and up onto the shoulder of Whernside although I could still see him. Rachel was not far behind me. I gradually reeled in Mark and two others and we ran together along the now well worn trod to Blea Moor.
The valley bottom was wet as always. The marshalls here had been busy and the trig point was painted a bright white. So much felling in the next valley caused some initial confusion so my line was not perfect but I got back on line just below the air shaft and caught two who had gone much too fast east.
I ran the lane reasonably well buoyed up by the thought of food and drink at Stonehouse. There is always plenty of support and people with cameras here. The pasta was a struggle to get down but I managed with two cups of tea and refilled my bottle with more Mountain Fuel. I would have liked to have headed up the lane still eating but decided to sit and concentrate on swallowing.

I then spent the next section trying to catch up with Rachel again. She reached Great Knoutberry ahead of me but we were together across the bogs that would lead us down to Redshaw. We were over half way now and to my surprise my time was looking OK. Rachel wanted to try to get under 16 hours as she took 16.08 last time and I knew my times were often 15:30 or 15:45. 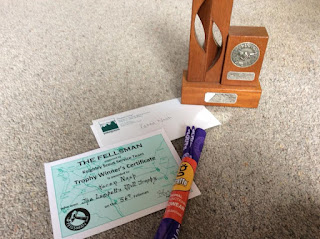 So a trophy and prize voucher to go with the Fellsman necktube despite it all. All that remained was to take down all the Runfurther gear and take Dick back to his car in the quarry.

Posted by Ultras and a lttle bit more at 08:14 No comments: