I woke on Saturday at about 6am and my body was already saying 'No, this is too much, can't we just walk a bit, lie in the sun, drink beer and watch the football.' You'd think by now the heat would feel normal but I think it has steadily drained me. The NT was warm, Scotland was warm after Rum, The LAMM was very warm, SW100 was hot and last weekends SLMM was very hot. I raced hard on the Klets clocking up about 34km and 2400m of climb on day 1 and about 28km 1950m on day 2. I was shattered when I reached mid camp and needed a rest before I could contemplate putting up my tent. At the finish on day 2 I was totally wasted. It took several days to recover, rehydrate and to even contemplate sitting in the garden in the sun. But, I loved all these events and activities and having a ball with some great wins too.
I ignored my body and felt a bit better after breakfast but even sitting on the coach to Bowlees I was sure I would struggle today. The suspension bridge was closed so we had a leisurely walk down stream to the next bridge and then back up the other bank. All very calm and civilised although it didn't help Rory and Ken who were hoping to race hard and get back to watch the England match. I knew I had no hope of that so I opted to wear my England shirt and give my support that way. The start was typical no fuss Joe 'Any questions? OK off you go then.' The first CP was only 7 or so miles in and it was mostly flat so that means running! Long ultras mean this is not my forte but I tried hard to just go at a decent steady pace. 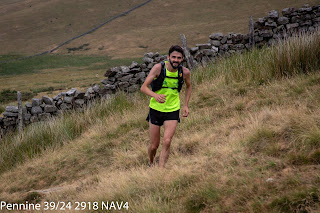 The front men were soon out of sight but I could see others spread out up ahead. 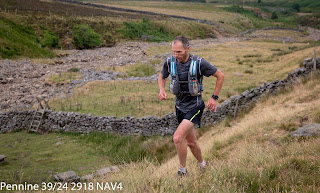 Nicola was very close on my heels but at this stage I just did my own thing. In any case I thought the threat would come from Carole or maybe Cass. Caulrdron Snout was in full flow- apparently there is no pipe to send water supplies down the valley, they just let it flow. I quickly topped up my water and set off for High Cup Nick. After a few km on the stone track it was a joy to drop off left onto grassy paths and down to the river. After the bridge more grassy paths led to one of the best views in northern England and to reach it from the east is wonderful. There was no time for photos today though as we began our descent to Dufton. 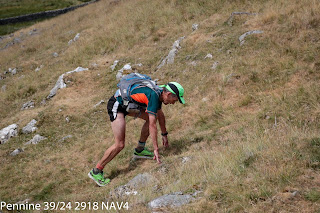 Down and down and down some more so that you arrive at the village road with quads screaming. I grabbed cheese, tomatoes, melon and filled up my water yet again. It was roasting now and I was hoping that Mountain Fuel would have enough electrolytes to do the trick. Just as I left the CP Nicola arrived. Oh heck, the race is still on. What goes down must go back up again so the next section was up, up, up. On the walled lane I could see Nicola not far behind but as we reached the open fell it was a little cooler and my power walk stomp seemed to be giving me a gap. John B was at the foot of Green Fell taking photos and joked that today few people were running even when they saw the camera. 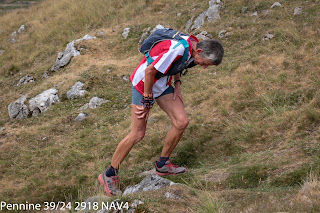 I was scoping out where the next water would be to dip my buff, cool my head and collect more drinking water. 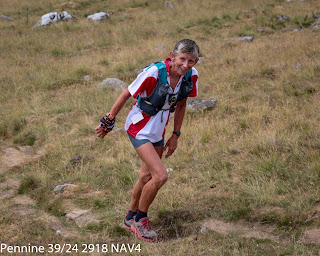 The pull up onto Knock seemed endless and it took a few hundred metres to recover enough to run. There was more flagstone path than I remembered and I was soon at the road snaking onto the aerials etc on Great Dunn fell. I had a gel and felt  it kick in. This fuelled me over Little Dunn and onto Cross Fell. I dropped the three guys behind me and caught the two in front. The ground was dry and my trod to the main path worked well. Jim and the water pipe at Gregs Hut were a very welcome sight. The water might not have been 100% pure but really we had no choice. 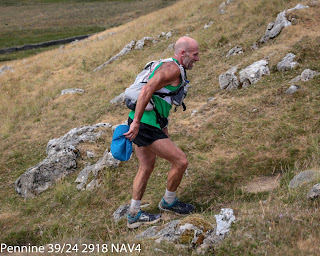 A runner who I had been close to since the start set off with me on the knarly rollercoaster track. He was determined and it really pushed me to keep running. He got away just before the descent into Garrigill but we were together again at the CP at the far end of the village. Ros and Neil had the radio on and were able to report England were 1-0 up! As I sat chewing a slice of melon they scored again. My garmin suggested 4.5 miles to run but the finger post said 3.5. No time to sit and wonder Nicola would be chasing me down. I like the last section along the river back to Alston. There was some shade and lots of grassy paths and even a mini bog (yep, i found it).  I couldn't really believe that I had kept my lead and managed to run so well today. At one stile I got cramp and ended up in an undignified heap on the floor but I knew the end was close. Along the final wooded path, spot the Runfurther flags, up the steps and breathe! 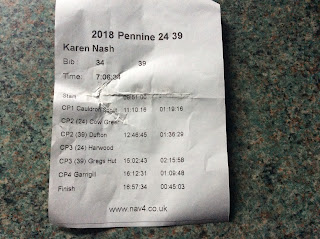 7 hrs 06 so 22 minutes faster than last year. I was more than happy with that. Ken and Rory both finished in under 5hrs 30. It took several pints of water before I could move and eat Joe's famous soup. A shower and more soup had me back on track.  It is beautifully relaxed and sociable in the YHA. 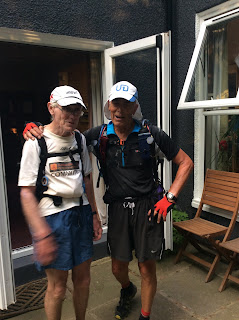 We sat munching, drinking, chatting and cheering in the next runners. Some then left to make their way home but a number of us stayed for a meal and drinks. Great to see so many friends- Stuart who I have not seen for ages, Cass and Nicola who I met briefly as they finished the Lakes Traverse in Shap and loads of Runfurther members. 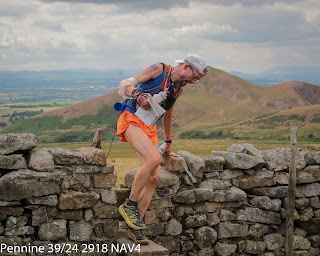 So pleased also to see Nick recovered and able to risk driving and running. He will have taken loads of superb photos as usual.
For me next is a rest. No races planned until the GRP towards the end of August.
Posted by Ultras and a lttle bit more at 05:27 No comments: