This race will always have a special place in my heart. It was the 62nd ultra in my crazy year of multiple ultras but there are so many more reasons too..... It rounds off my racing year, the organisation is low key but spot on, the food is fantastic with real food on the way round and real home made food at the end. Why else do we run ultras except to eat well afterwards? I always know I will meet friends and it isn't actually that far from home. This year I ended up travelling up on Saturday morning, alone in my car, which was different to our usual habit of sleeping in the van on the start line. As I walked into the hall Tony, Albert and Josie were about to set off- damn, I was just not ready to go just yet. Finally I like the race because I know it will be tough and test me. This year just turning up was about 50/50  after frost nip in Nepal damaged my toes and the likely mortons neuroma on my foot got progressively worse. I was quite worried that cold wet feet from the snow would cause me pain but also maybe damage my toes more permanently ( if you have never suffered you won't understand just how painful it is). I am seeing a new consultant on Monday about the neuroma  and as the forecast was OK (although not as good as it had been earlier in the week) I decided to fit in one last run in case what he has planned means no running for a while. Sounds a bit melodramatic but the discomfort and pain have really started to get to me towards the end of this year.
My plan was to start at around 8am so that I would not need a torch on the way out and maybe not on the way back either if all went well. The walk up from the icy wood-yard had been chilly so I kept most of my layers on . It was interesting to see runners in more clothes than even me and yet others in shorts and T shirts. At the kit check with Shane I joked that he needn't do more than lift my sack - to weigh that much I clearly hadn't skimped on gear. Starting on my own meant I could ease into the first climb out of the village with no pressure. I could see others just ahead and in fact I caught Heather as we went through the gate and onto the common, just before Nicky and a friend overtook me.  I love the grassy tracks and paths across Askham Common and the icy was only patchy and very easily avoided for now. I concentrated on keeping my feet dry and warm. I had a cag plus hat and gloves on and was aware I was getting damp but I think it was all just mist and clag not really raining. Dropping off the common there was slightly more ice on the paths but it was still avoidable and didn't slow me down much. By now I was hooked in behind Tony and ??? ( i must ask Josie) and using them to tow me along. I played cat and mouse with them and a few others for much of the day. I dropped to the lakeside and then took the road up to Martindale church as I remembered the alternative path as boggy. I don't think it makes much difference time-wise really.The road  meant slightly more climb and had a few greasy patches. My poorly feet had forced me to wear the oldest and widest trainers I could find but naturally they had almost no tread left on them! A quick scan at the church CP and we were off on a short road section. It wasn't long before this morphed into the track and path to Boredale Hause and we were passing some runners who had set off earlier than us. I lost some time on the descent to Patterdale. I am becoming a real slow coach in old age on steeper descents especially if there is any rock. I caught most people up again at Side Farm as we stopped to be scanned and also grabbed some food (cheese, tomatoes, crisps) and a cup of tea. I set off munching malt loaf. Yum. I made good time along the valley floor and then it was the steady climb up to Greenside mines. The race is relatively unusual in having an open start window of a couple of hours. It is nice to have people to chase down and as others come flying past it also means you see more of both the slower runners and the elite end of the field. Somewhere on the climb Katie, Caspar and Tom came past me and then I caught Chris H. I had not seen him for ages and it was good to chat. After the mines there was deeper snow and before long I stopped to put my kathoolas on. Not much point just carrying them and my worn out shoes were giving me no real grip. They gave me the confidence to move a bit faster, although speed is a relative thing. 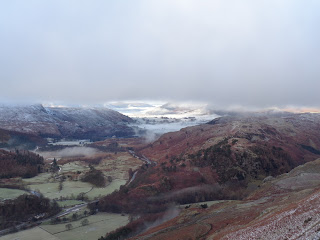 I missed the best direct line up but was soon on well trodden snow and in sight of Stu and his bridge. 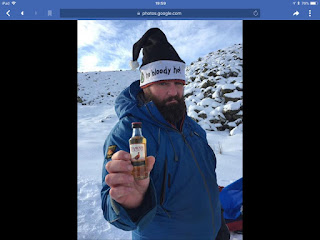 Later I believe it got sunny here but for now it was all fogged up with a watery sun not making much impression. 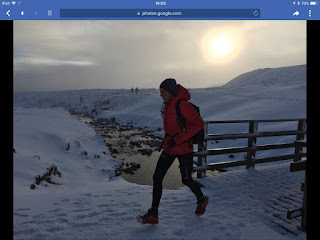 You couldn't see how far up Sticks Pass was, just a straggled line of runners disappearing into the gloom. 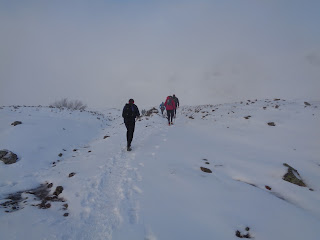 The compacted snow was good for running and I was enjoying myself. 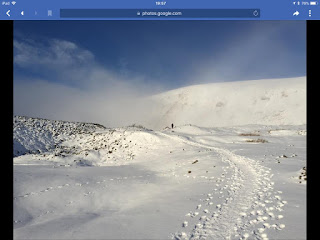 There were skiers and snow boarders having fun or flogging up in the hope of fun. 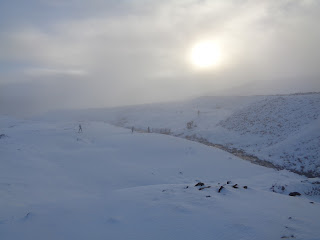 Then suddenly we were at the top and I prepared myself for losing more places again on the descent. Even in kathoolas I was a bit timid although in fairness my big toes were now wet and cold and so painful.A quick scan with Shane and it was onward on the rocky muddy path to Swirls car park. More real food and another cup of tea plus a quick moan to Gaynor (sorry) about the state of my foot. Then the seemingly endless forest track.... I was too lazy to stop and take off the kathoolas and they were not as uncomfortable as I expected. I was keeping Tony etc in sight but now also had a chat with Steve W as I passed and then spotted another Steve W up ahead - it took me until the bottom of Grisedale to catch him but I did eventually. In the meantime we had Raise Beck to climb. There was some ice but not so much. Part way up was John Bamber in full Santa gear with his camera and then the top and Grisedale |Tarn appeared. 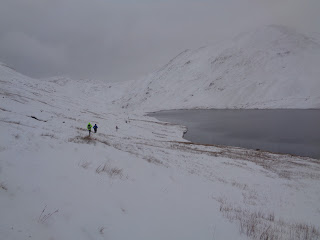 It looked amazing but the path was less consistent than at Sticks Pass and the danger of some deep holes slowed me down. Here runners split. 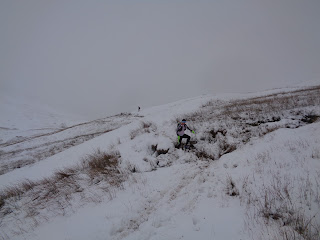 I should perhaps have gone down the grassy bit towards the stream as I was definitely not fast on the icy rocky path, The vis was now clear and I could see all the way to the bridge so it would have been safe and perhaps faster. It was at the bridge where I took kathholas off that I eventually caught Steve W and trotted off happily on the big wide track. The lure of more food at Side farm was pulling me on. Along the main road in Patterdale a car honked it's horn- Stu on his way to Side Farm but he didn't offer me a lift. One think that long ultras has taught me is positive thinking so as well as the food and another cup of tea at the CP I was buoyed up by the thought of only having to  climb Boredale Hause not Place Fell! 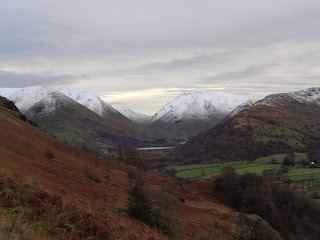 It should only be 2 hours or so from here. Yay!  The stop for a cup of tea was well worth while. I had been thirsty at Grisedale and drunk from streams and even sucked some snow. 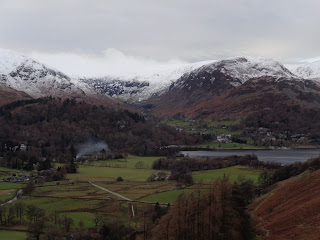 Now I concentrated on keeping up with some and catching others. The descent was easier than I expected and apart from 100m or so was easy and fast running. The lane seemed so much longer than on the way out this morning even though the first half was gently downhill.  Then up and up to Martindale church but knowing that the last real climb was now done. 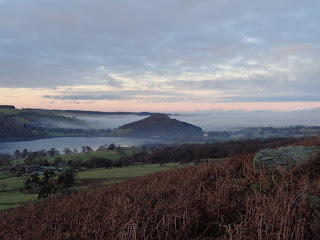 I missed the best line down to the lake but was soon on the path by the wall and heading back to Akham Common. I concentrated hard on picking runners off and had some success although at least one runner did pass me. 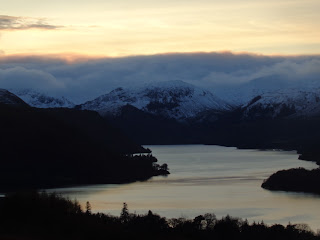 I ran well over the common, past the cockpit and on to the skyline that would drop me to Askham. I must have put just a bit too much effort in because at the fell gate it all fell apart and at least 5 who I had overtaken caught me and headed off to the village. I was tired and even though the end was close I struggled to make myself run. I knew my chance of a PB had faded up at the fell gate but as I headed down to the village in ever thickening mist I hoped I could make sure it was not a PW. No torch was needed and I was back in 8hrs 27. So not a PW. Not a great time perhaps but I was happy and I later found I could have kept up with Tony and Josie after all.
Soup, real brown bread, more soup and then 3 cups of tea and I started to feel normal.  A relaxing chat with Tony, Albert and Josie with ore tea and cake before I suddenly started to feel chilly. A quick escape to the toilets to strip off damp layers and get my feet warm and dry made me happy again. The walk back to the wood-yard seemed twice as long even though it was now down hill and even though the road was not icy as I had feared. I got the car heater blasting hard and then realised the harm it was doing to my frost nipped toes. I nearly stopped at Tebay services as the pain in my right foot was so intense but instead coasted the downhill as I massaged my foot and turned the heater down. Tony et al shot past me at Sedburgh but  despite the mist it was an easy and fairly short drive home.
Not a bad day out to end the racing season. Thanks to all at Nav 4. I enjoyed the local beer that evening too.

Posted by Ultras and a lttle bit more at 11:56 No comments: