A weekend of rest (well no running)

Friday afternoon saw me finish bus duty and run down the ginnel to find Bob and the van. A quick drive to the lakes and we were parked in Hartsop and ready to walk (I did get changed out of work wear at some point). 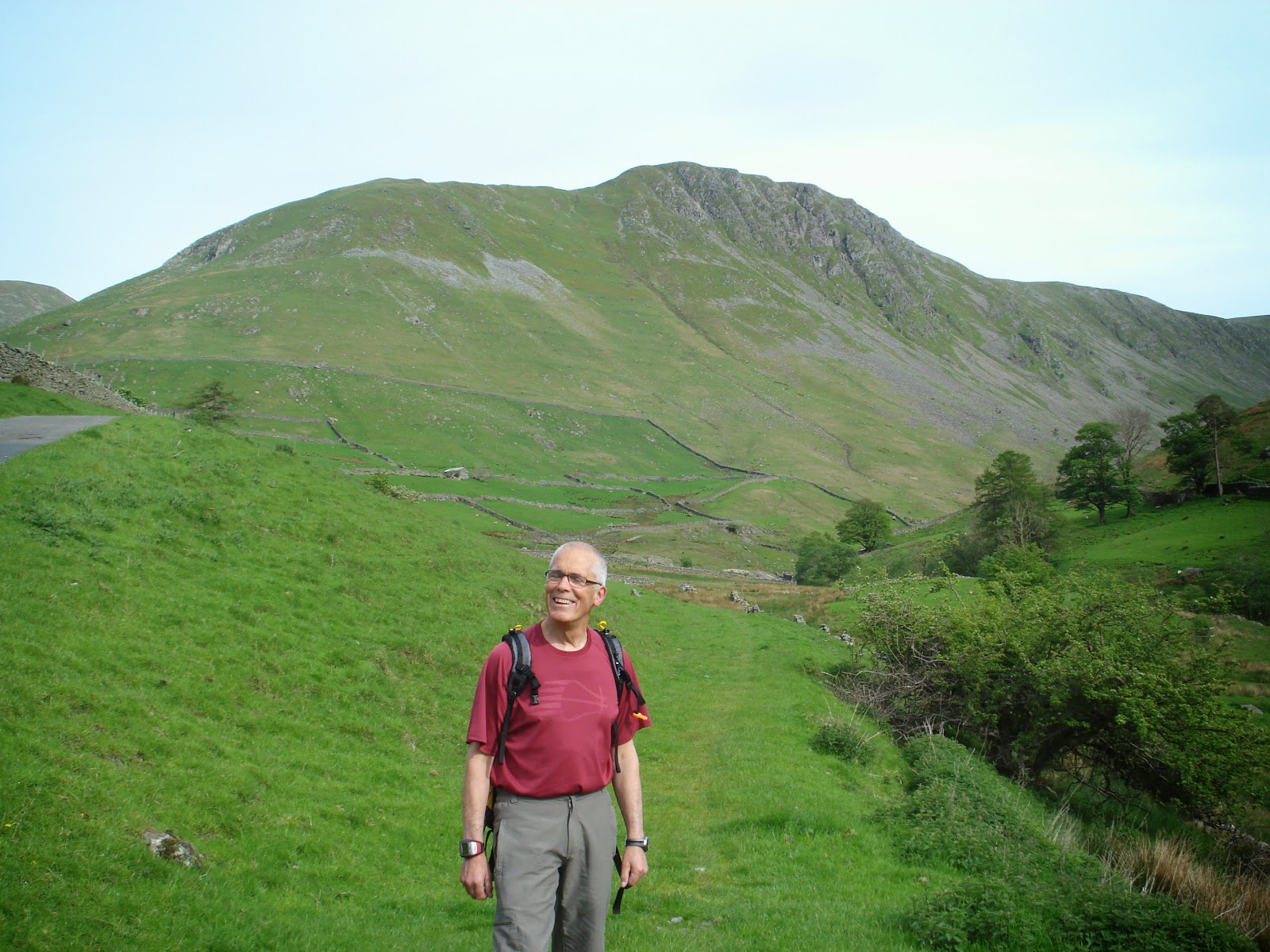 It was a glorious evening and quite a while since I had been on these particular hills..... in fact about 30 years when I did a similar route on a very wet cold day when camping at Brothers Water. It could not be more different with sun, clear skies and amazing visibility. 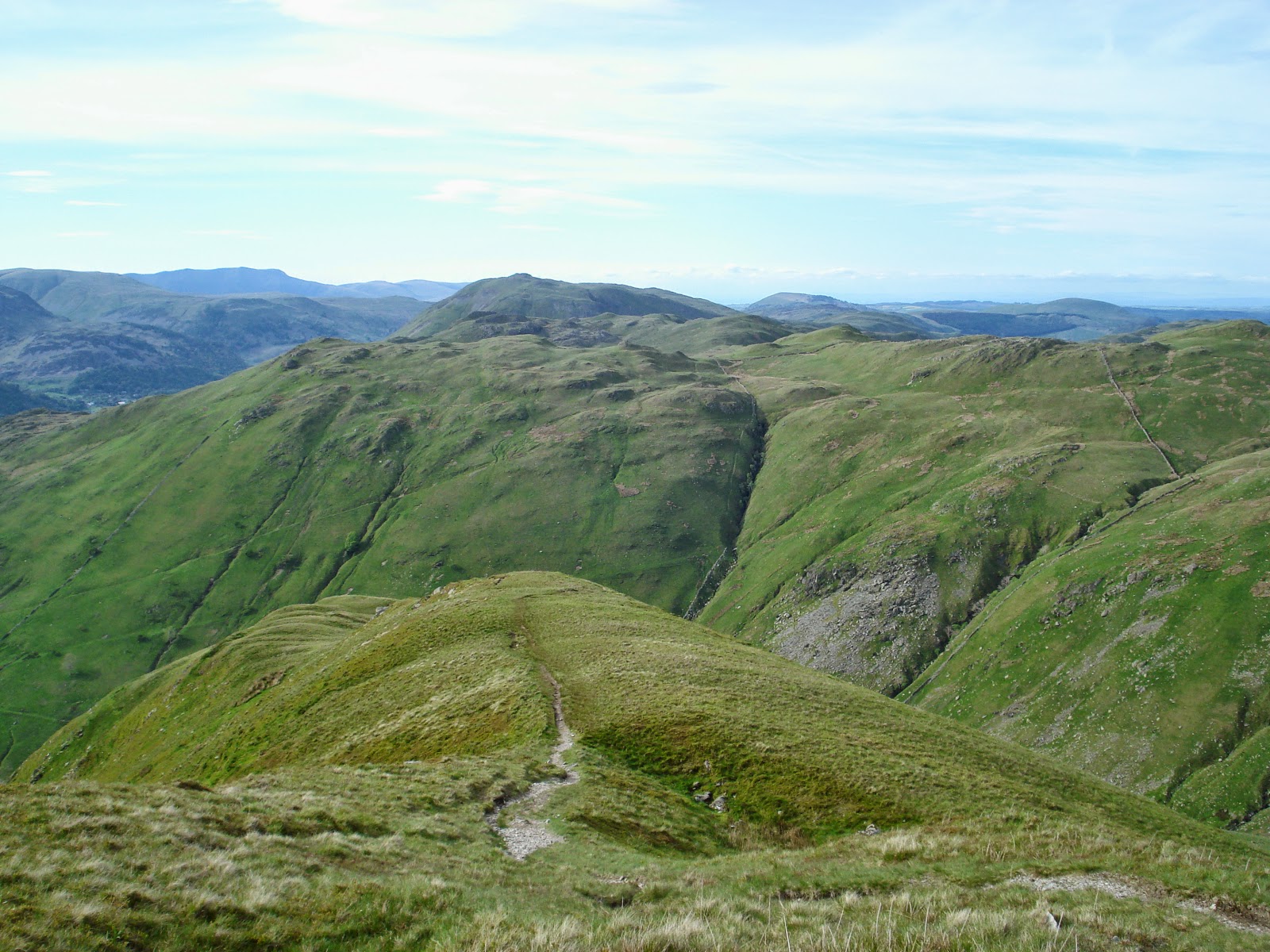 We set out up the water company track and onto the hill. I do not know what this farmer used to mark his sheep and lambs but it had run and they were all dyed a variety of red and pink. The climb up the fell side when we left the track and took on Grey Crag was vicious but actually didn't last all that long.
The evening sun cast fantastic light and shadow on all the surrounding hills so that every tiny feature was highlighted. I soaked in the view and studied our planned route for the next day. Then it was off towards Thornthwaite Beacon for a bit before contouring across to Threshthwaite Mouth. 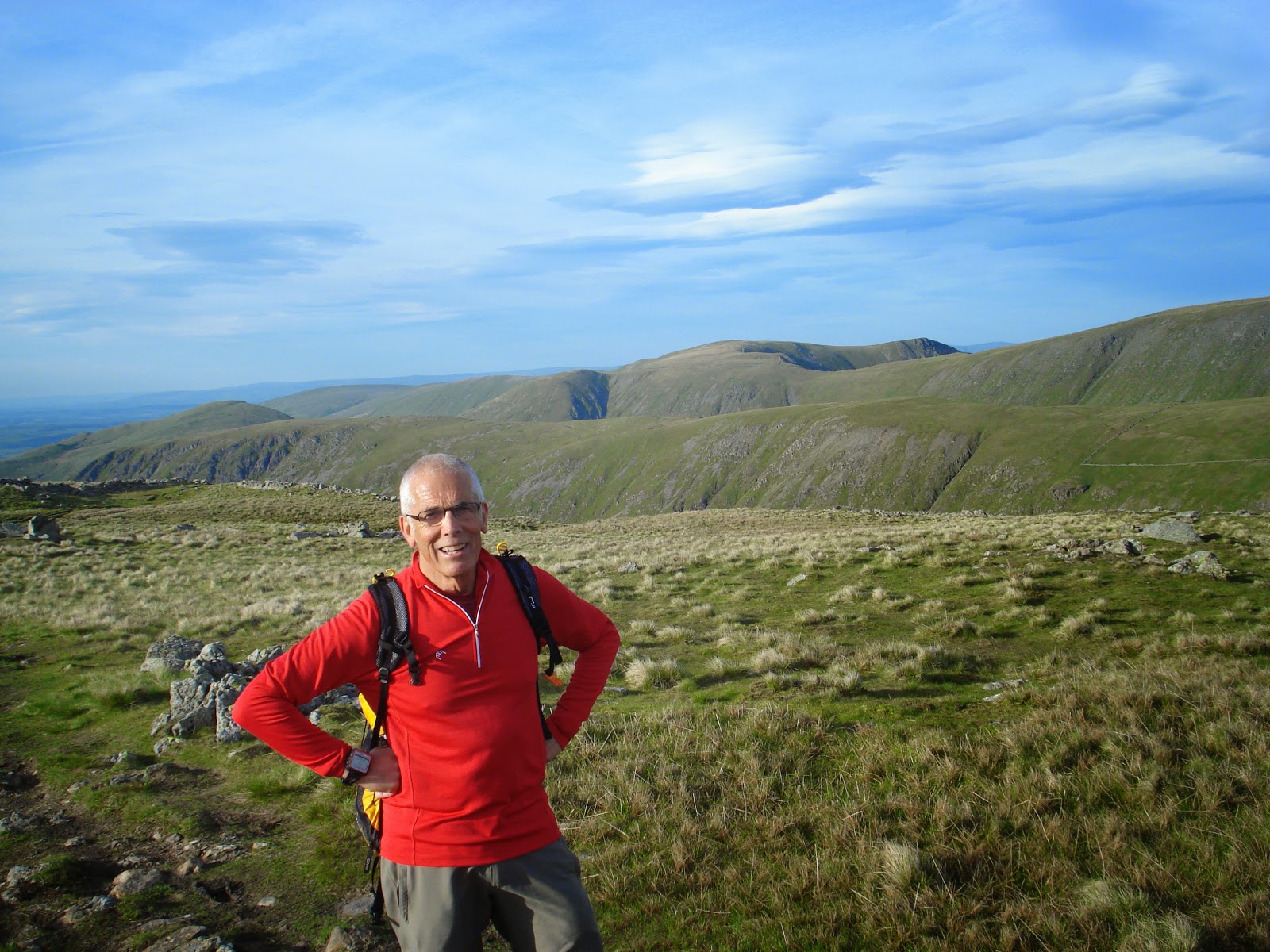 The ground was dry, very dry. The scramble up the rocky path from Threshthwaite Mouth was so much easier than my last visit on an abortive JNC in horrendous conditions. I lay in the sun on Caudale Moor and soaked up the views as I waited for Bob who was not far behind. The rest of the route should be easy as it was almost all down hill. The easy grassy path led down and then slightly up to Hartsop Dodd. 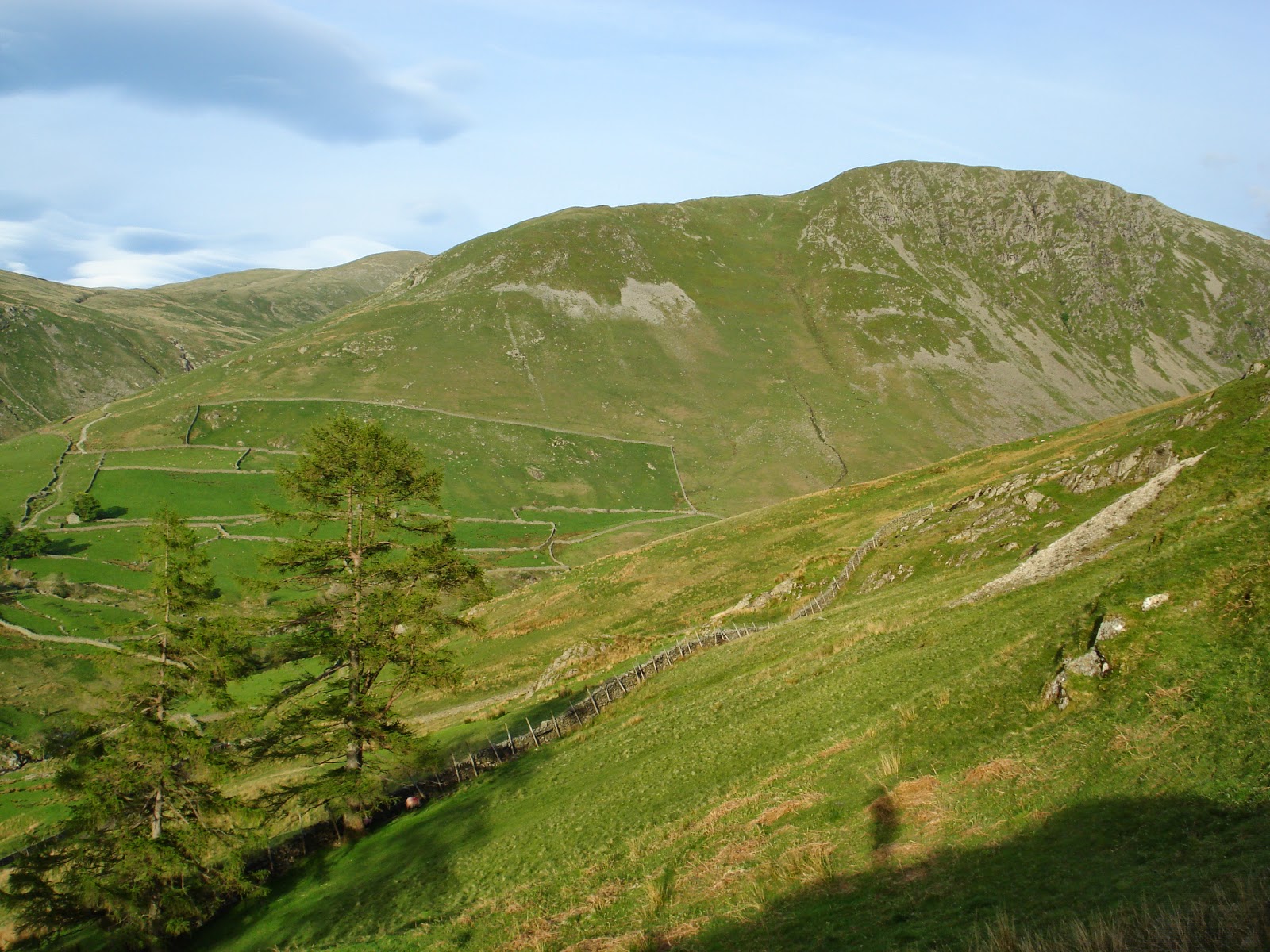 Three lovely Wainwrights on a superb evening. What a wonderful way to end the working week. All that remained was the return to the van. I had forgotten just how steep the drop back to the valley was. It didn't take long but my knees were complaining and I was glad to reach the bottom. We made a donation to the Patterdale Charity box and left to find a camping spot for the night. It didn't take long to drive the length of Ullswater, ignoring the crowds in Patterdale and be glad we were not stopping there. 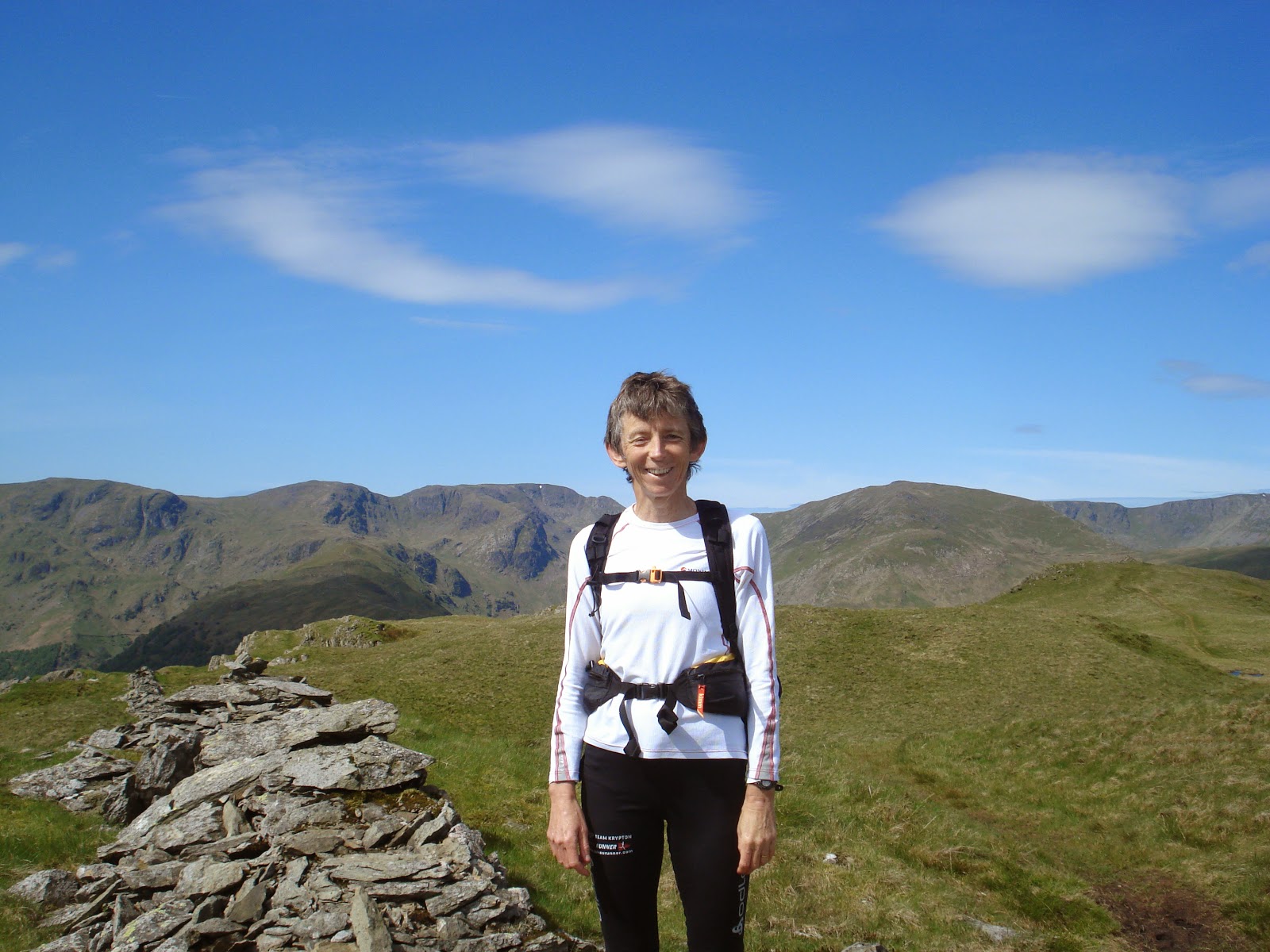 We parked up at Martindale 'new' church and settled in for food and sleep.  I slept well despite the early dawn chorus and by 8 we were up fed and ready for off. It looked like being a glorious day. 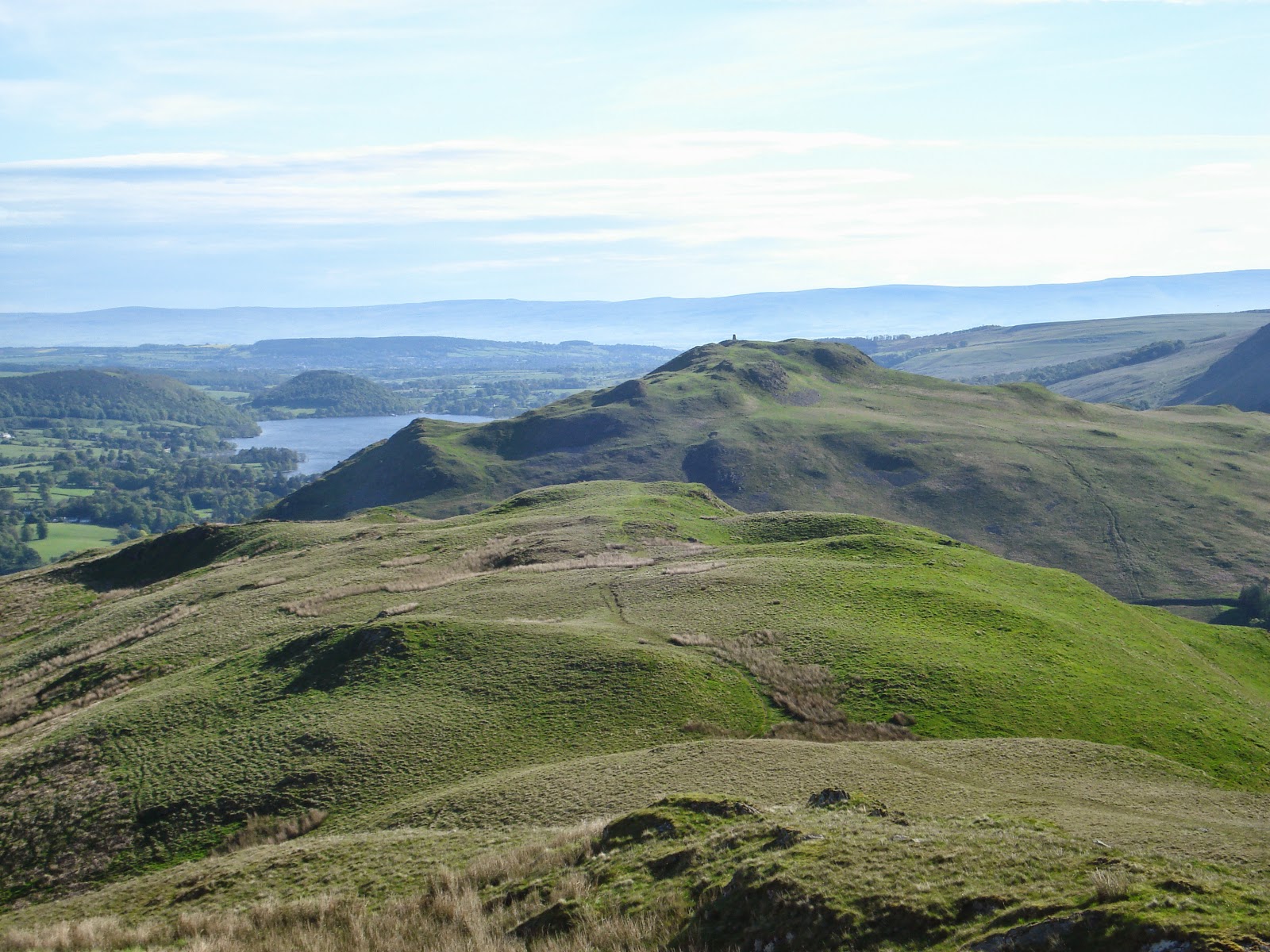 Bob originally set out to do 10 peaks in each of the 7 wainwright books =70. This all happened quite fast and so a new challenge was born, to complete all of them in a year. Having started with one plan and now switching to another has left some oddities and some weird route choices as we try to sweep them up. We set out along quiet lanes and found the track to the old footbridge across the stream and onto the side of Place Fell. I knew this from the L42 and was sure it would be a gentle start to the day. I explored the peaks off to the left and then realised Bob had caught me up, not seen me and was heading up to Place Fell. 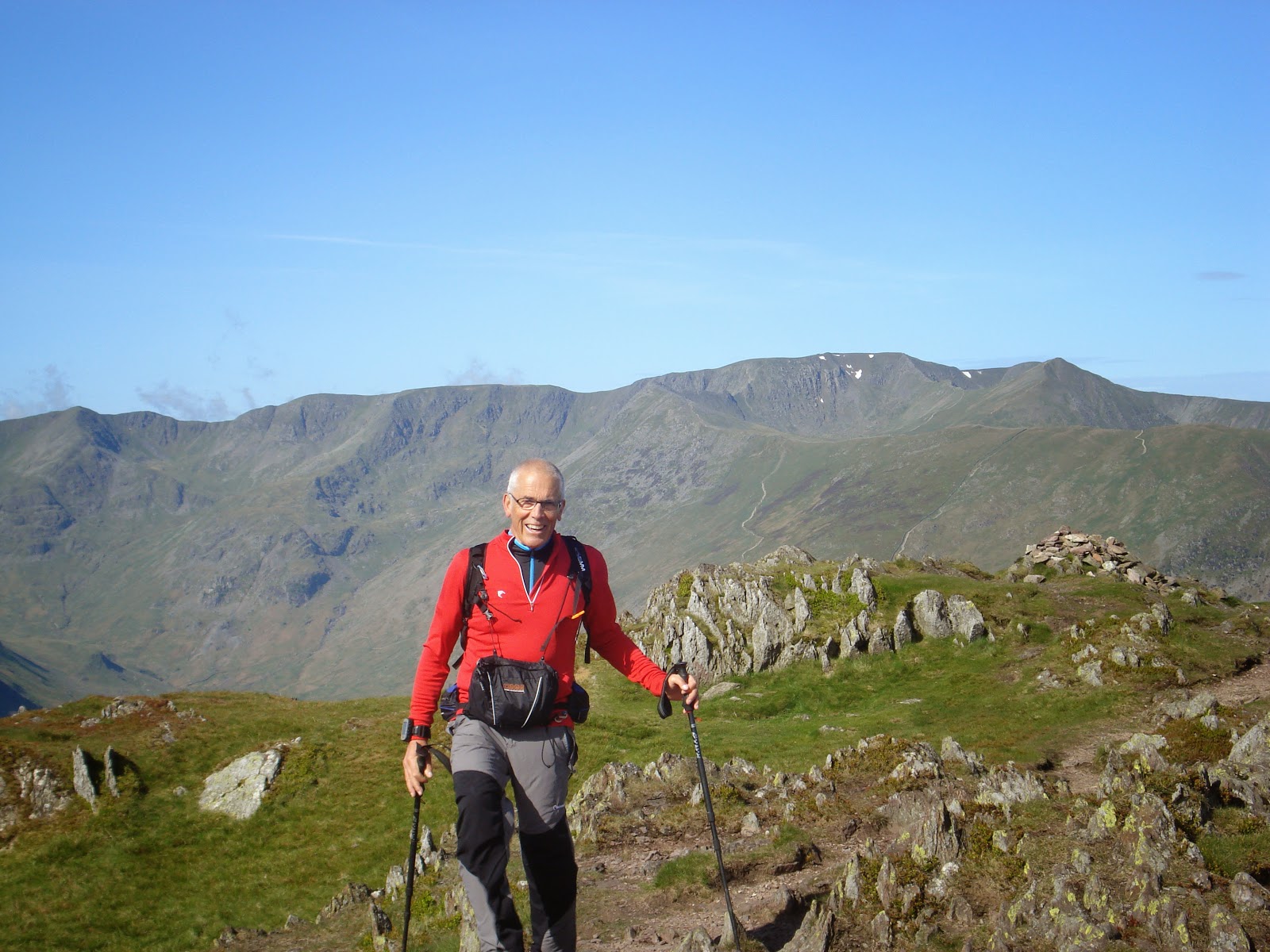 A quick jog caught him up. The boggy flat area was almost dry and we were soon on the first summit. There was a very stiff wind making it chilly but the views across to Helvellyn and Skiddaw were superb. Descending we met our first walkers and looking down Boredale Hause seemed horribly crowded. We were soon down and overtaking a big group of walkers.
As we were aiming for Angle Tarn Pikes we lost most people as they stuck to the lower path. The Tarn itself was beautiful and I enjoyed myself overtaking some mountain bikers who were struggling on the rocky section of path. 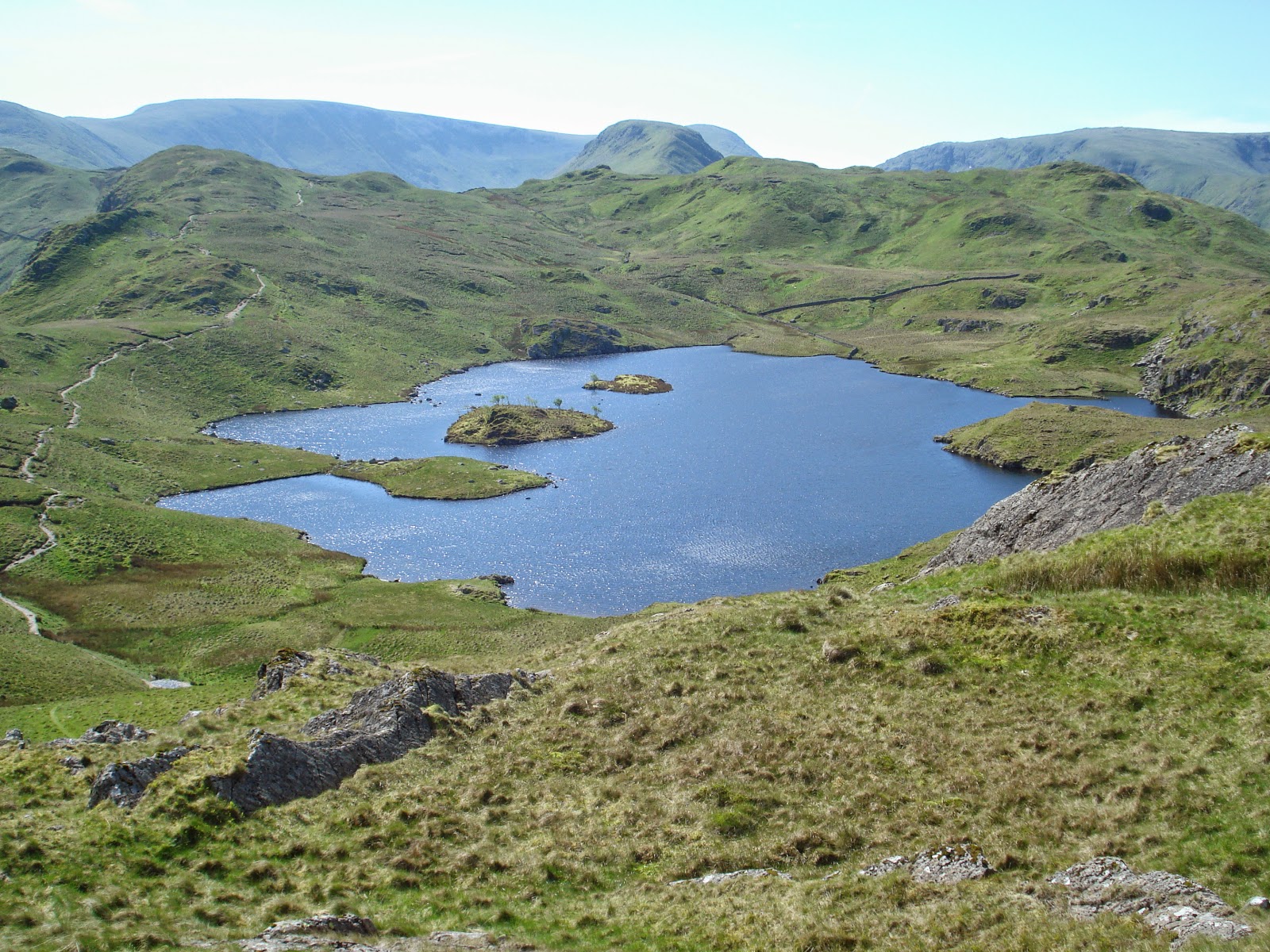 I think I have been to Brock Crag when I have orienteered on this area but could not be sure. 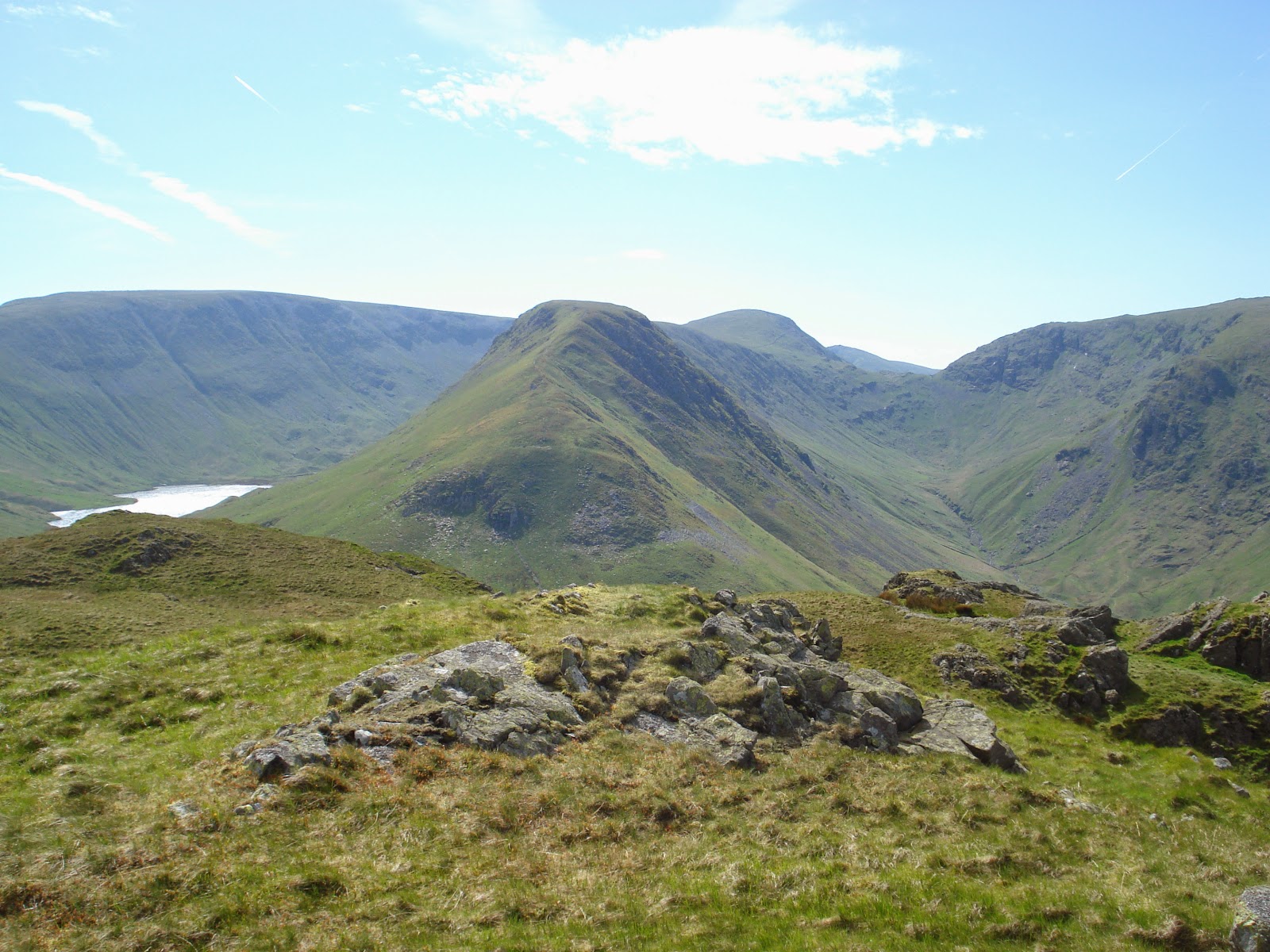 We had the place to ourselves and found some of the wettest ground of the day. The view down to Brothers water and the peaks of the previous night were great. We returned to the main path and met up with the big group of walkers for a few minutes. We also met the first of several people who needed navigational help. The day was clear and the paths were huge so I was a bit taken a back that people could be unsure. I would worry for them in bad weather. 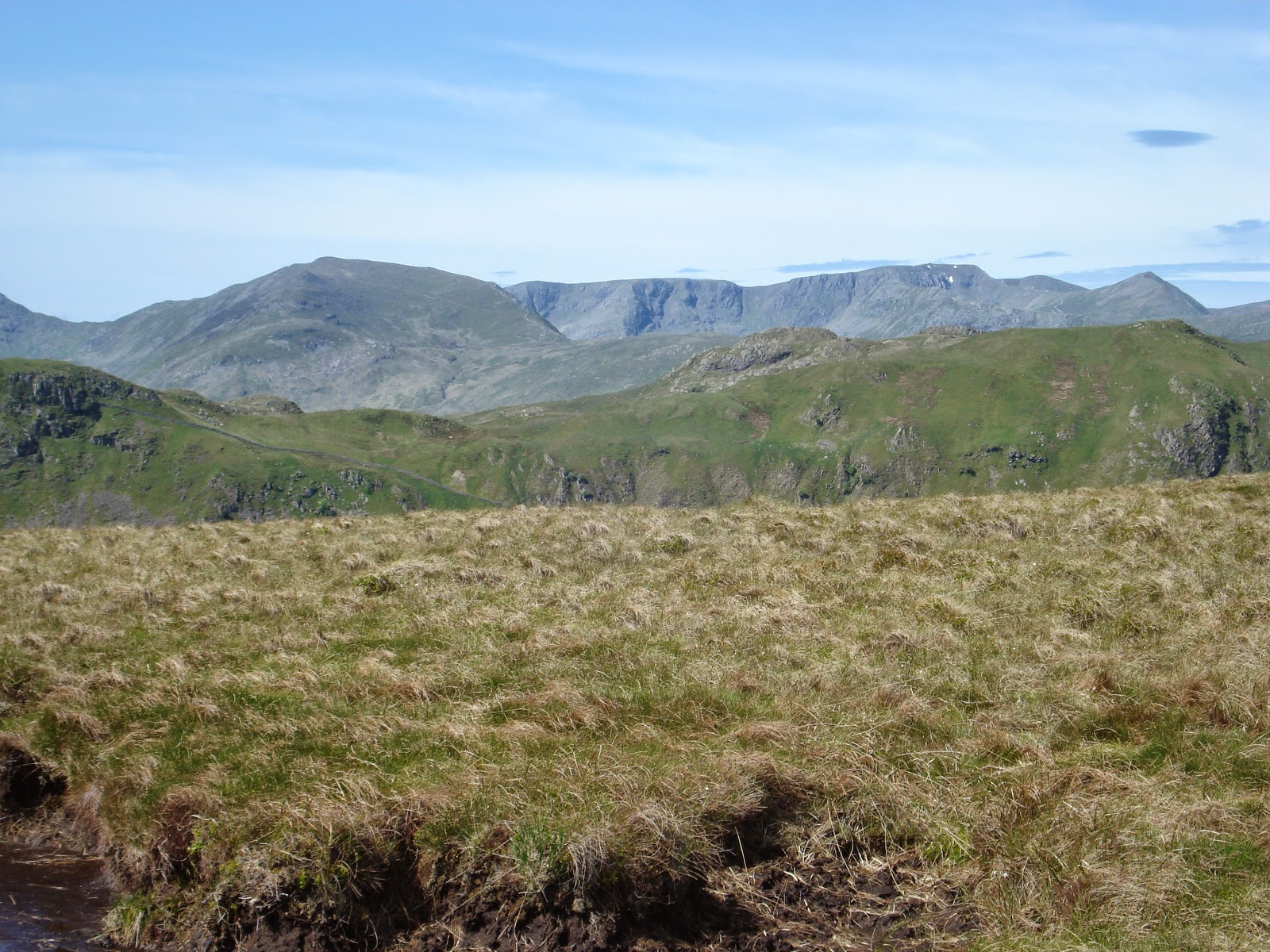 Most people were heading for The Knott so as we cut off for Rest Dodd we were alone again. I don't think I am anti-social but I do like to have the hill to myself. Sitting just below the summit of Rest Dodd and checking out the ext section I spotted the herd of deer in Bannerdale. It was an easy walk down and along to The Nab. 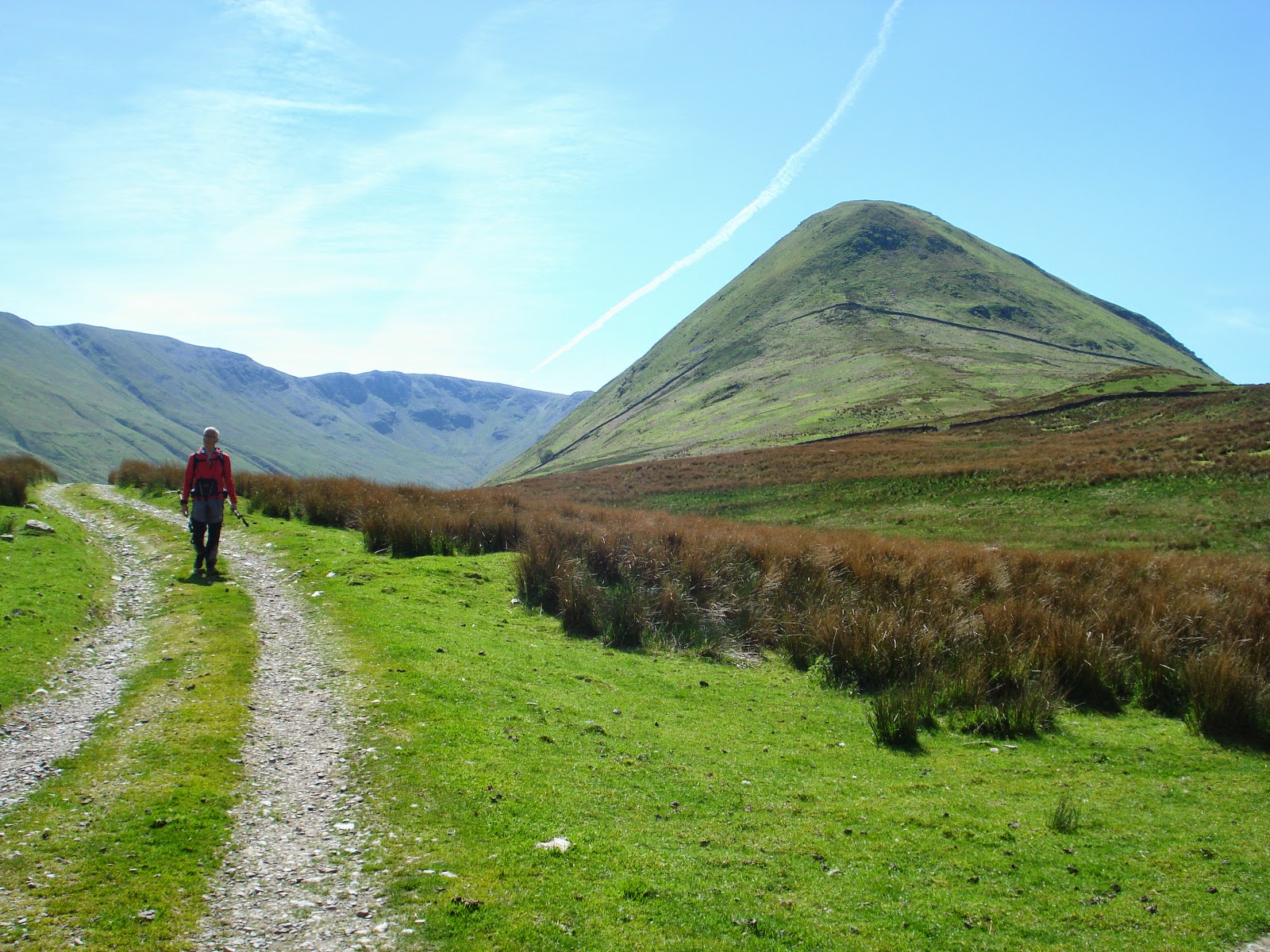 The view to Hallin Fell and the obelisk was very clear but it would be some time before we arrived there. We were making good time and I started to hatch a plan. We had more than enough time to complete today's route and add in Sunday morning's. I was going to keep quiet but Bob must have esp and sensed what I was plotting. We agreed to review it but it did seem possible. The descent off The Nab was even steeper than Hartsop. We were both intrigued by 'The Bungalow' which we now know is an old shooting lodge. It has a vaguely colonial air and is rented out as a grand holiday cottage. A short walk on the valley floor led us back towards Beda Fell. 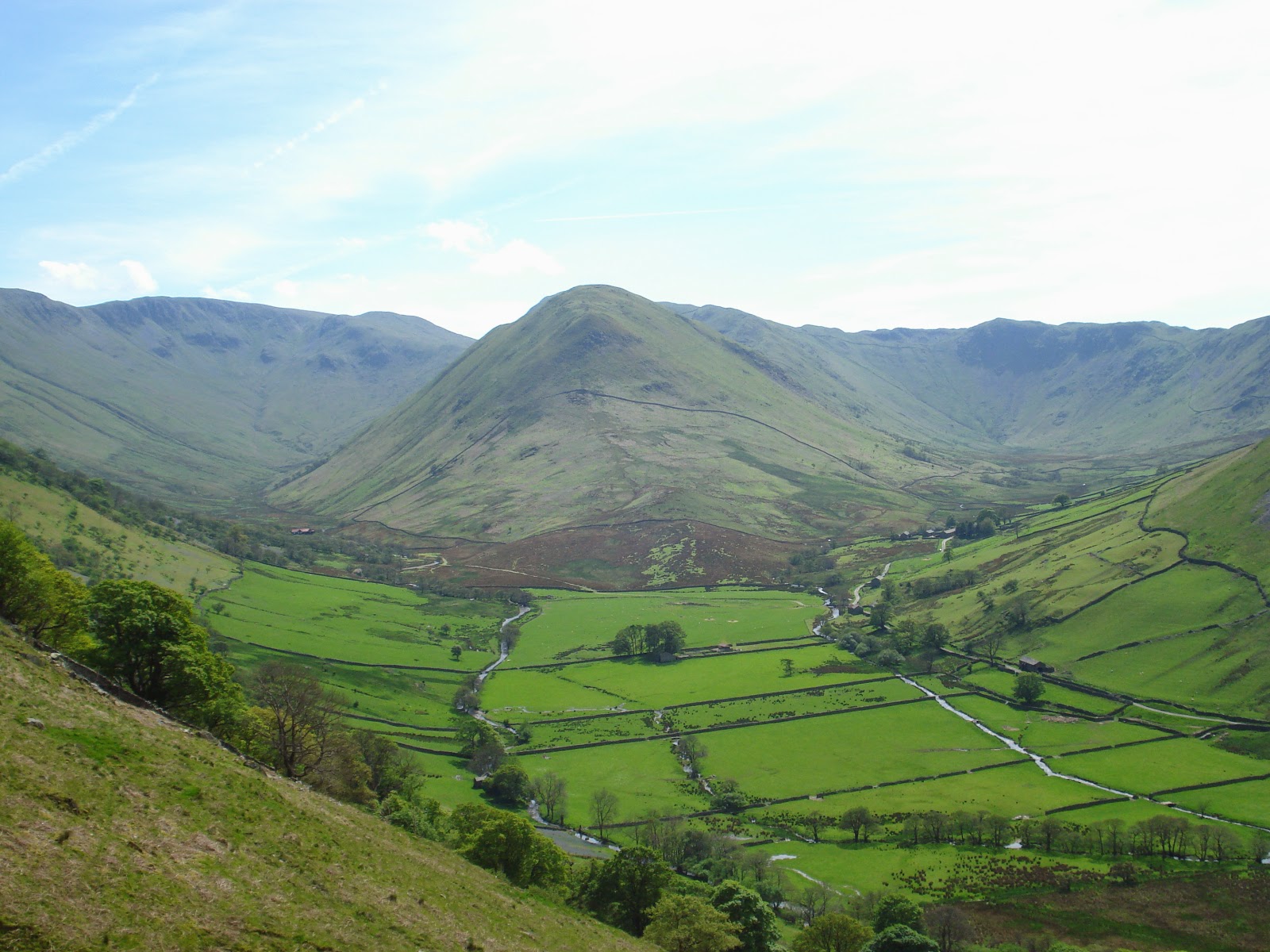 We had to check which bit was the Wainwright and were relieved to find it was Beda Fell and Beda Head rather than Bedafell Knotts. I suddenly remembered how Rowena and I had run across this area on a SLMM and I knew where all the paths were. The stroll along to the end of the ridge was lovely and the views just kept coming. We dropped to the valley floor, past the old Martindale church  and set off up the sloping diagonal path to Steel Knotts. 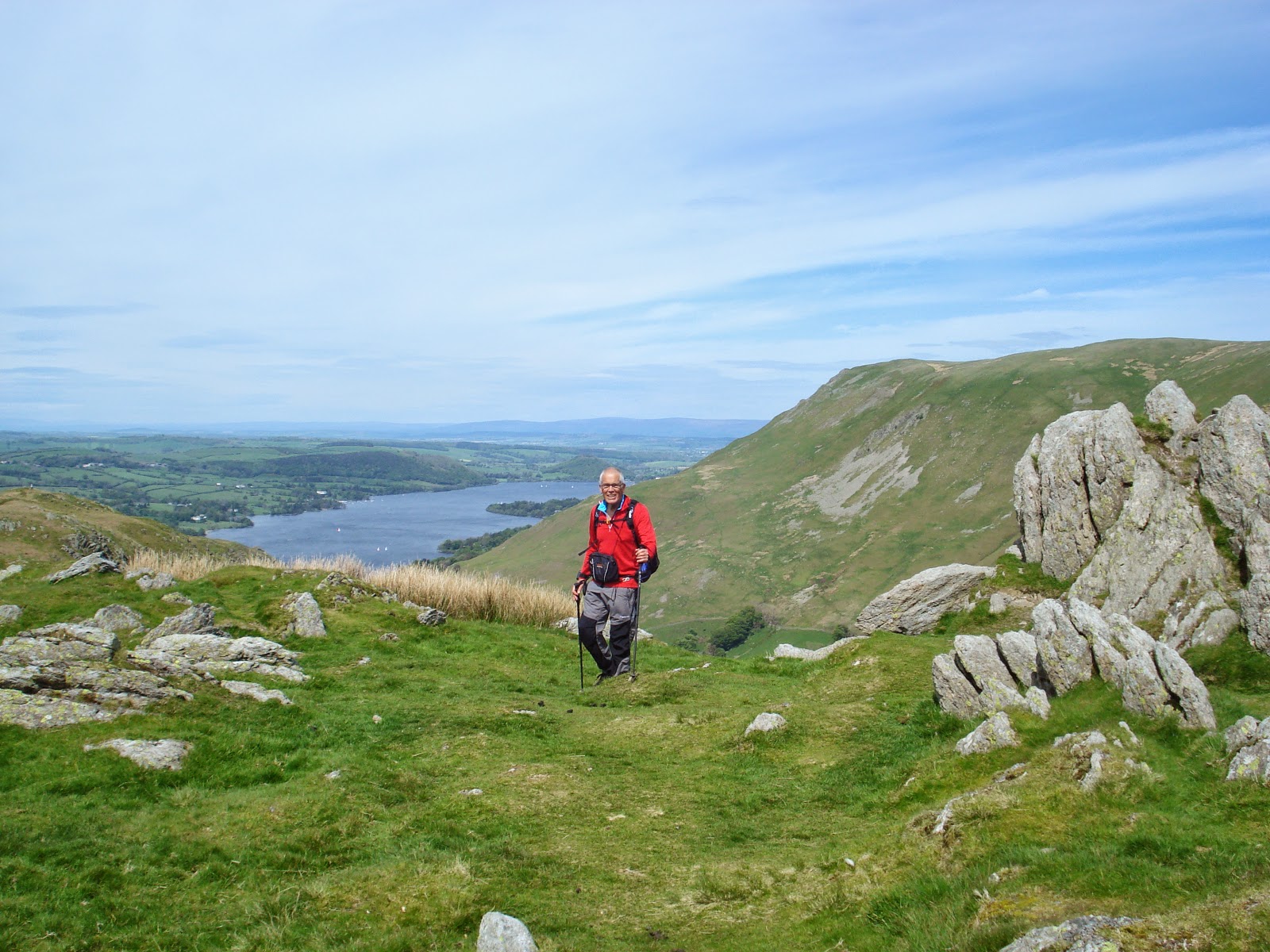 The wind was even more fierce now and as we turned back south it was quite a struggle. We headed to the wonderfully named Gowk Hill and several ruined farm buildings before climbing up to Wether Hill. For what seemed like the first time in the day we now had the wind on our backs and a mostly downhill section. We were soon on Loadpot Hill and contemplating Bonscale Pike. I do not think I had been there before and it was quiet. We contoured , on a different path each, to Arthur's Pike.  Bob was convinced there was a direct way down so we stayed close to the edge and after Long crag sure enough there was a way. It was steep but grassy and safe. It dropped us onto the bridleway and an easy route back to Howtown. we opted for the off-road bridleway via Mellguards to drop down directly on the church. I shot off ahead and made a brew, vital refuelling before we completed the day by adding Hallin Fell to our tally. It was a very short and easy walk and a great way to end with superb views from the obelsik over Ullswater and across to Cross Fell on the Pennines. 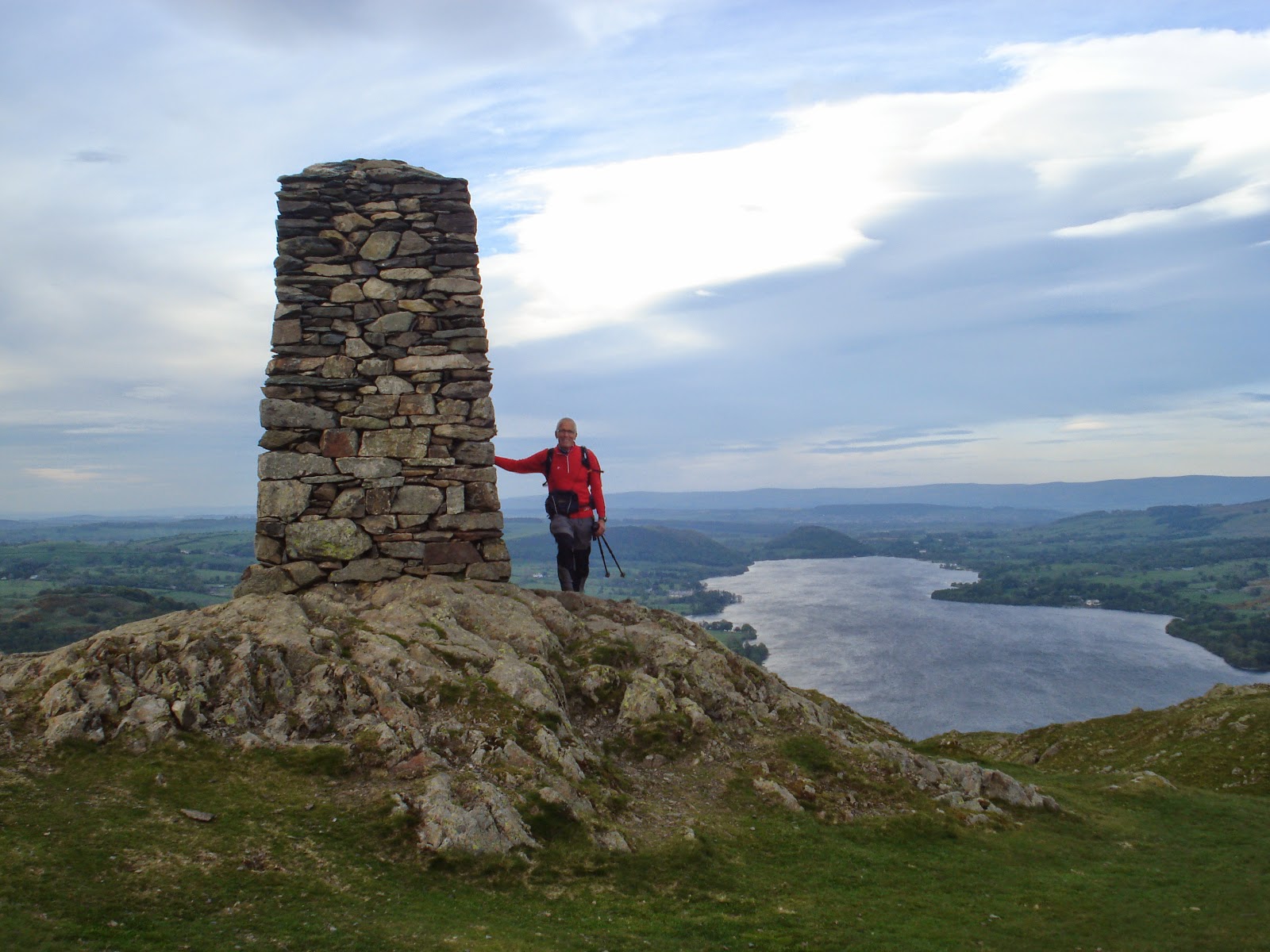 We managed a photo in the ever strengthening wind and then it was back to the van. We were worried enough by the wind to move it across the road and away from the trees and rooks.By the time we had eaten it was almost time for bed. The wind rocked the van and we did not sleep so well. The worry of rain did not materialise though and so the plan of more peaks on Sunday was on. It was going to be an odd day of collecting in some outliers. First stop was the Aira Force car park and a walk up Gowbarrow. 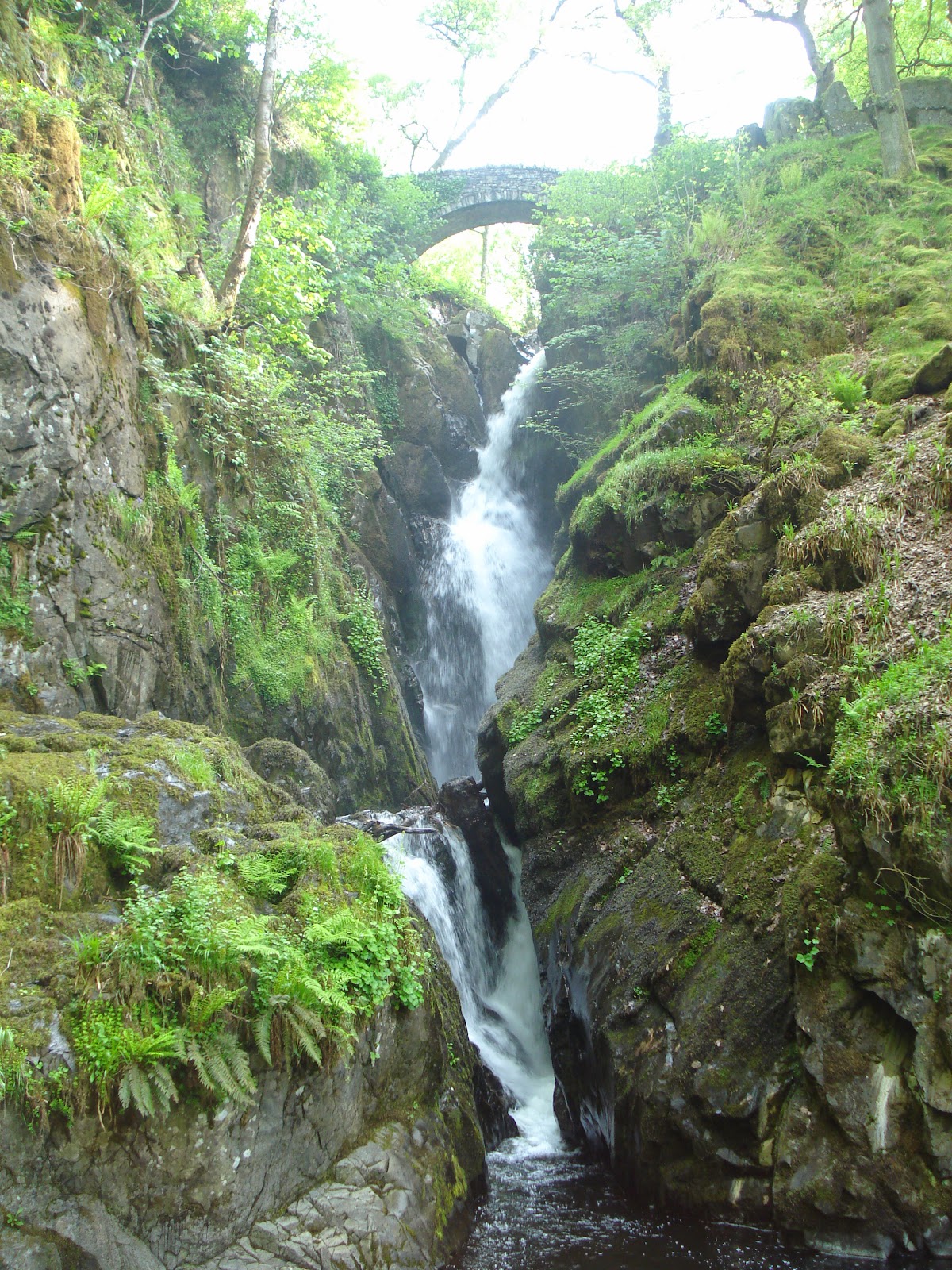 We had orienteered on here too, but not for many years. The waterfall was beautiful even after a relatively dry period and we had the place to ourselves. We wandered across the trods and up on to the open fell climbing steadily until we got to the trig point. A huge path building plan was underway and they were mammoth sacks of stone everywhere. It seems a shame but I guess the erosion makes it necessary. Heading down off the hill we met quite a few walkers on their way up. The benefits of an early start. Next stop was the other side of Kirkstone and we prayed the lay-by would be empty. It was as not many ascend Wansfell from here. This was wet, wet, wet. Heaven knows what it is like after rain. It was a fairly quick out and back with a discussion of the best way to get to Troutbeck Tongue. Bob sat in the van refuelling and I sat in the sun with coffee and a book. It wasn't long before we were ready to search out our next parking spot. Sorting out a route to take in Sour Howes, Sallows and Troutbeck Tongue was not easy. In fact I think Wainwright had a touch of sadism including the latter as it really does stand alone. The parking opposite Lime Fit park was all take so it was over to plan B. Fortunately there was space at the end of Dubbs lane.It was also very warm down here. WE followed the big track we knew from mountain biking and after hopeless attempts to get a lamb back into the correct field we struck out uphill to Applethwaite Common or Sour Howes. On these lower tops the wind was gentle and I sunbathed while Bob caught up. The contour round to Sallows was fast and we were soon on Garburn Pass. There was nothing for it but to take a direct line here and just head NW down and across the hill. 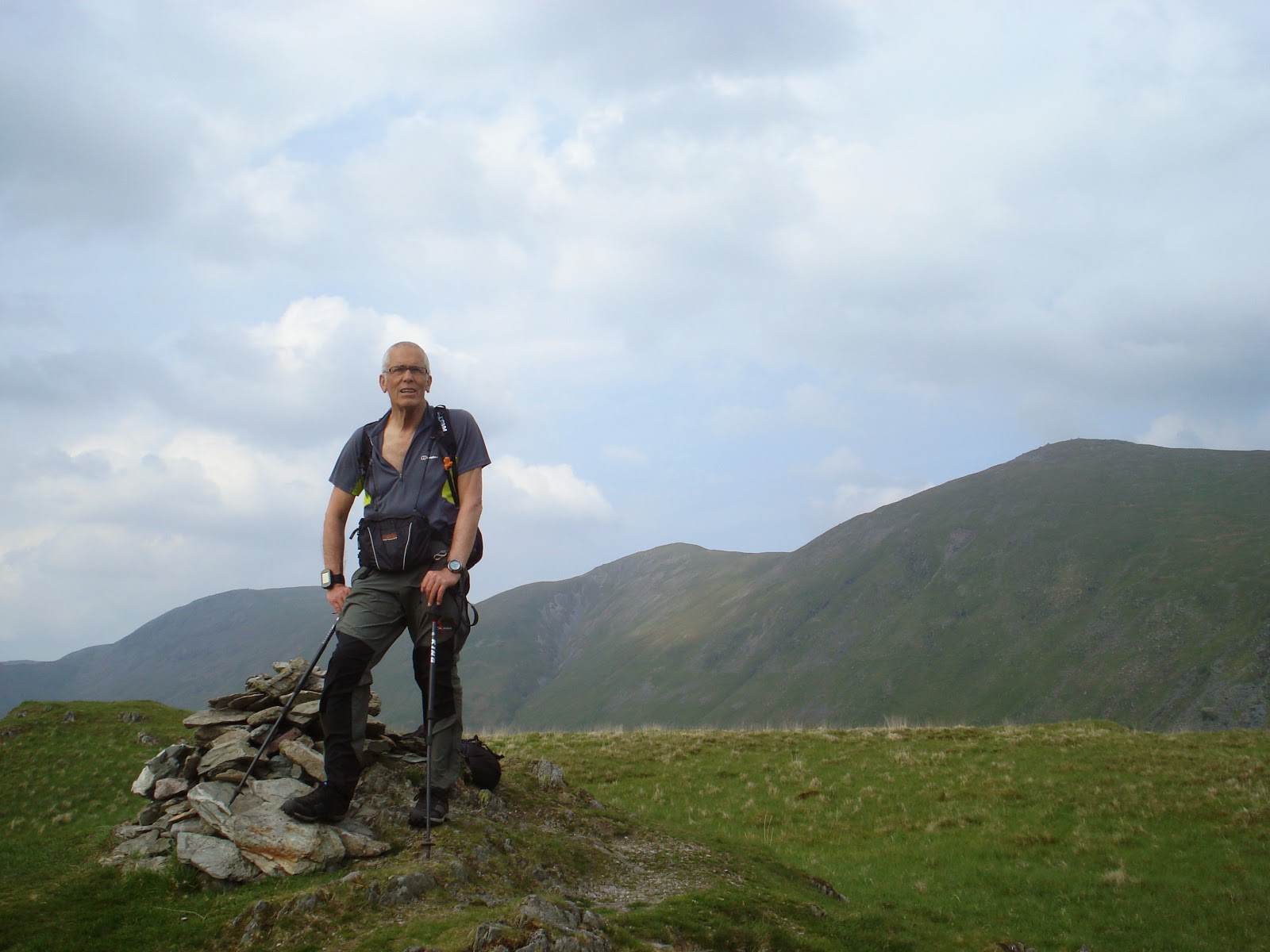 I reminded me of a leg on the LDMT but in reverse. The sight of masses of blue bells kept us going along the valley floor and across the streams. It was a stiff but short climb up the nose and then we were on the summit. 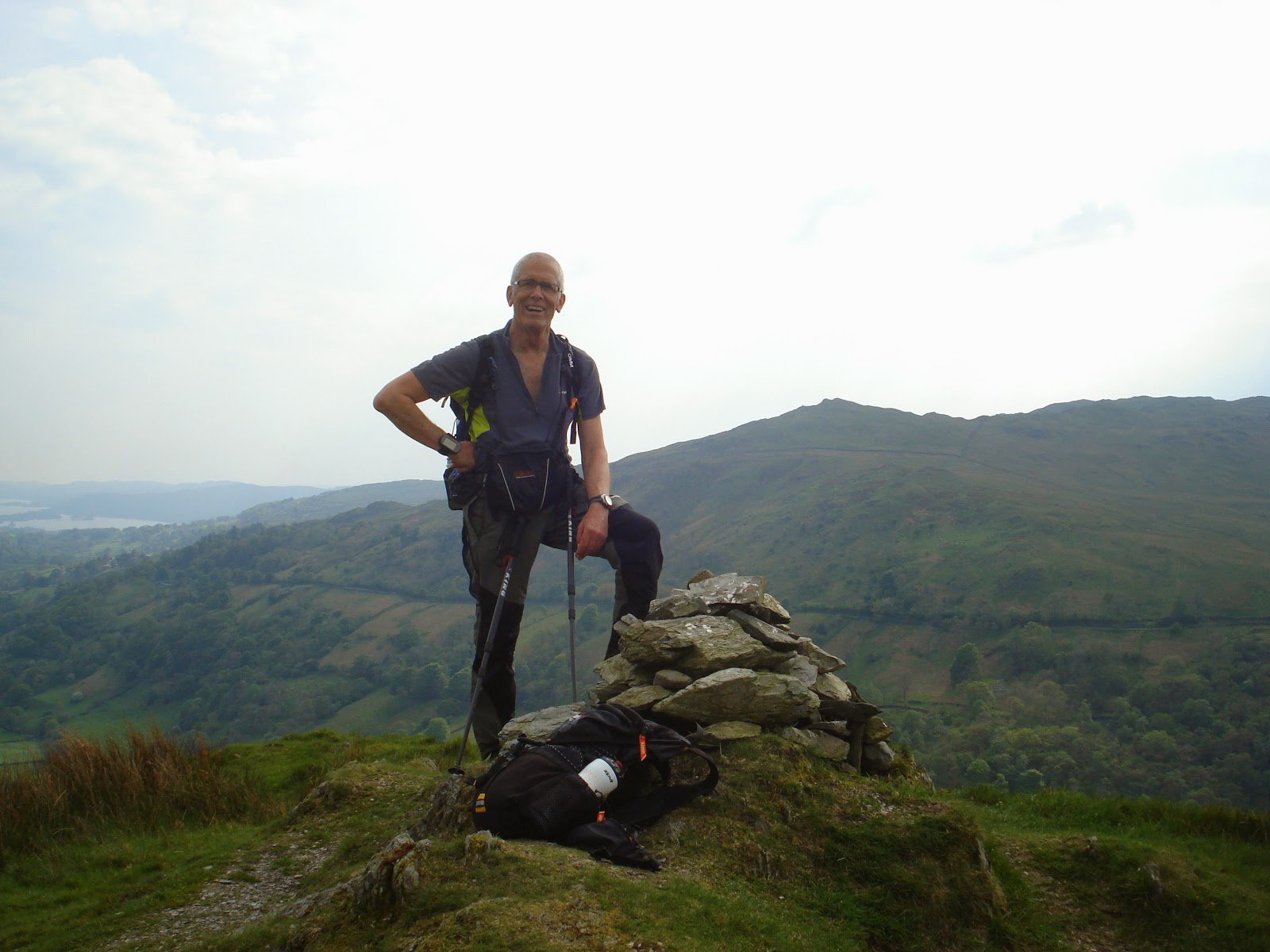 The last one of the day. I was not looking forward to the long trek back out along the valley track but it actually passed quicker than I had expected. I half planned a refreshment stop at the caravan park but knew it would make getting going again hard work. 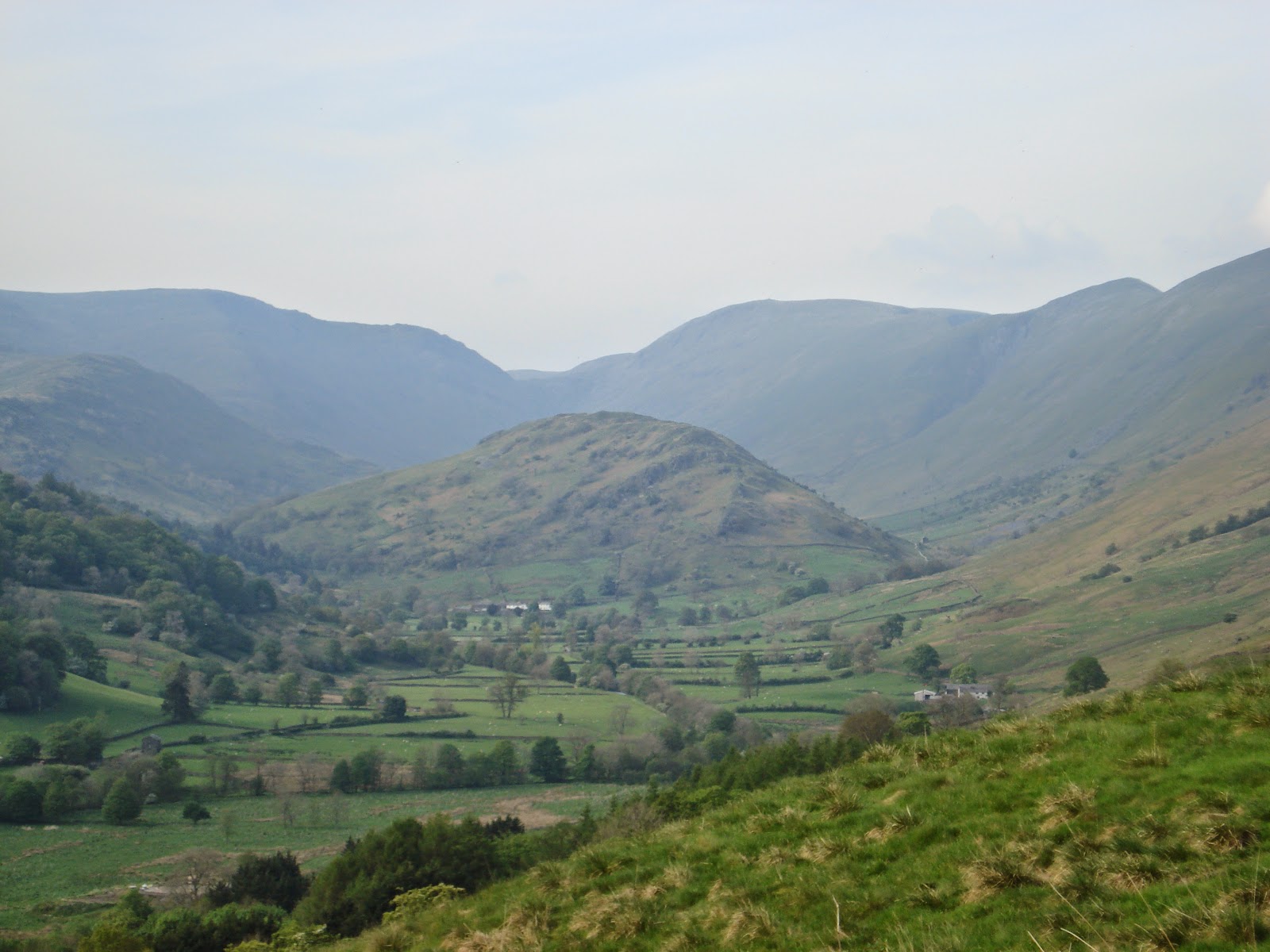 We pushed on, climbed to Dubbs lane and powered our way back to the van. What a great weekend.