Last race in the Runfurther series 2014

Believe it or not I have run the Round Rotherham 50 miler 4 times now! I first turned up in 2010 as it was in the Runfurther series. I had very little idea of what to expect despite having printed off the strip maps and the 'normal' maps. The strip maps are a special if not unique feature of this race. They make navigation very simple and work very well, although if you were to astray you could have big problems relocating (as Fraser and I did one one section a few years ago). 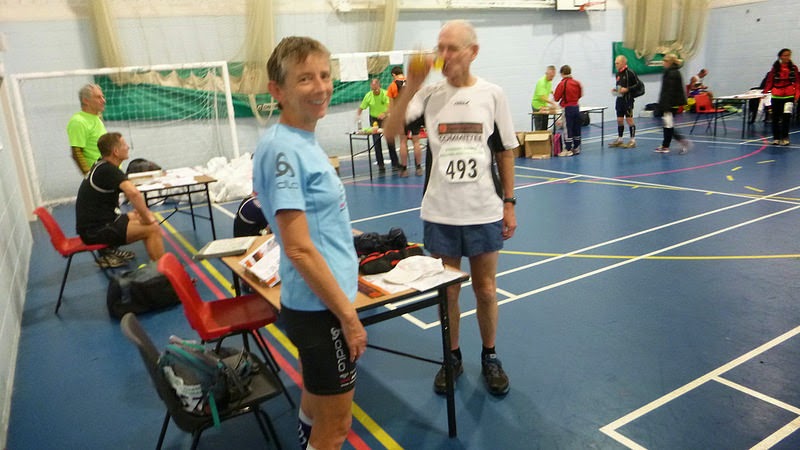 I am not great at broken sleep and so take our van rather than the offer of the sports hall floor. It is a well attended event with walkers or slower runners off at 6am, runners at 7am and relay teams an hour later. Although we start in the dawn it is fairly well lit for the first few miles and so few bother with head torches.
We had our Runfurther meeting on Friday night and then fell into bed at about 10. I slept well but was conscious that it was mild! The overnight rain had stopped and I awoke to hear Andy and Dick banging in the flags. Registration was simple and I soon had time to catch up with friends.  I did not have great expectations for my run this year.
The last 3 years had seen me get progressively faster with a ladies win in a respectable time last year. My achilles was sore, the haematoma has not gone and my body felt tired. Still, you cannot drive that far, start and not make a decent effort. I had hoped to wear Hokas but the rain and fear of mud made me change my mind.
After a short briefing and instruction to use the bridge not the level crossing near the end we were off. A flat start on tarmac cycle tracks and pavements means speed. It is hard not to get dragged along although a quick pit stop in the bushes meant I lost sight of many friends for a while. 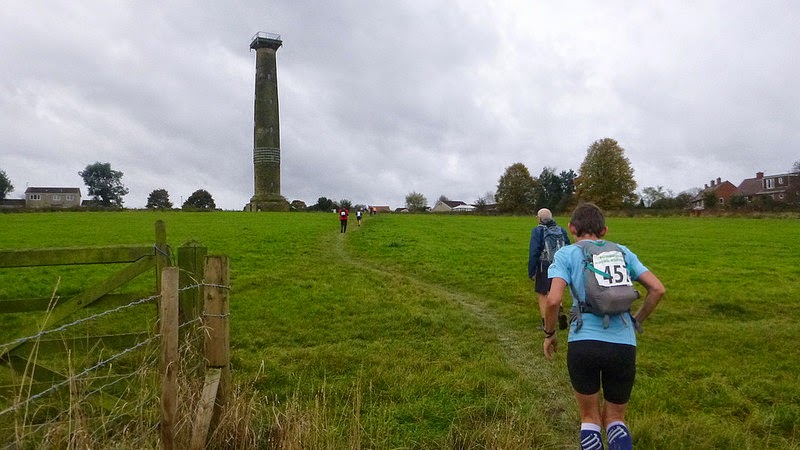 By Elsecar I had caught up with Dick and Emma but not Andy or Nick. 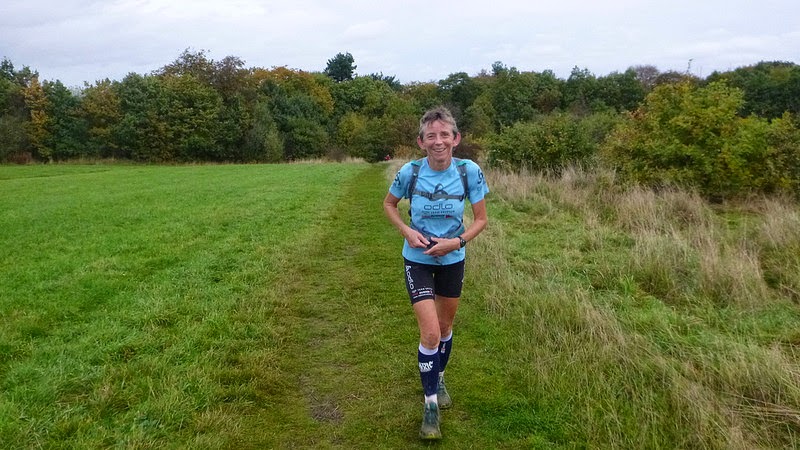 The slopes after the railway were slippery and I was glad I had some grip on my shoes. As we entered Wentworth I spotted Nick up ahead and used this to pull me on. 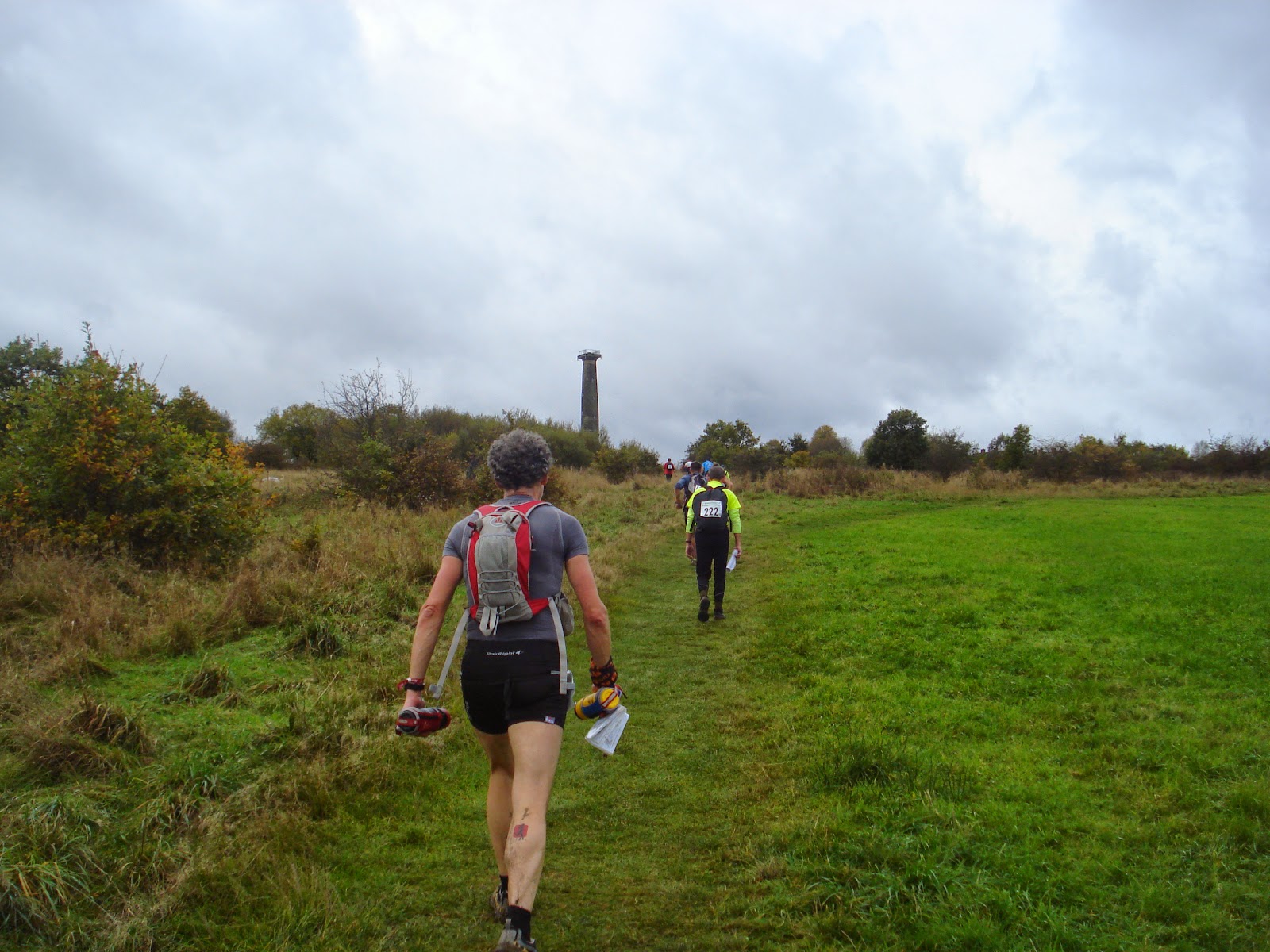 We ran together towards Kepplers Column a huge local monument and then down into Grange Park. I was not hungry or thirsty yet so just grabbed some banana and ran on.
The next bit is the least attractive of the route as you drop to a main road, take a narrow littered path to the canal and head a kilometre or so to Tinsley.  It is deprived and rundown and industrial but soon passes and makes me glad I live and work elsewhere! This is nearly 15 miles and I was still catching walkers who had set off an hour earlier as we ducked under the M1 and emerged onto redeveloped land. Getting under Sheffield Parkway seemed more overgrown than usual but the next 2km is pleasant by the river and means we are nearly at the cricket ground CP. I grabbed some more to eat and headed off past the reclaimed land where Orgreave Pit used to be and then over a road and into more semi-rural land towards an impressive railway viaduct. Rother Valley park should be a nice section and a celebration of 20 miles completed but somehow for me it is always a low point for my body, in fact Nick once found me in tears there. I kept moving this year but it was a hobble with sore achilles. It was also getting very warm and unbelievably humid. I do not sweat much but today it was pouring off me. Oh well, keep plodding as it is not far to Harthill and half way. Things become more rural with grassy paths, fields and woods. Then after passing under the M1 it is up in to Woodall and some gentle uphill fields to the next CP. I was sure I had a cup of tea here last year but today had to make do with water and jam sandwiches. Andy was apparently about 20 minutes ahead somebody told me. I needed a rest but knew that getting going again would hurt. I must have looked a sorry sight as I wormed my way out through a car park full of relay runners waiting for the change-over. We are now definitely in the countryside and I wandered what the arable fields would be like. I had forgotten to top my water up and ran out. Not good on such a warm day. Fortunately the fields were much less muddy than I have seen them before, less skiddy and had bits of straw and crops in for better traction. I watched a small plane take off at the grass airfield and prayed that the unofficial CP after the canal locks had water. They did. One day I will explore the pretty hamlet and the locks here, but not today. The water helped and I headed off to Woodsetts at a slow but steady pace. This CP is my favourite and I re-fueled with soup, tea and more. One runner was dropping out here and as I got up to hobble to the loo I did wonder if I should be continuing. This time it was really tough getting going again. Relay runners were starting to fly by now but each one was friendly and encouraging. I was also catching up some runners who had perhaps set off too fast. there was still no sign of Andy and I spent almost the whole race waiting for Emma to trot past me. Again I ran out of water but managed to beg some from the kiosk in the park and enjoyed my run through the woods. Passing people is always good for morale. I was reluctant to stop at Firbeck and so did not eat enough and missed the savoury treats on offer there. I now had company and several of us took turns to run off ahead, be caught, use the others to catch up ... repeat again and again. It kept us going. 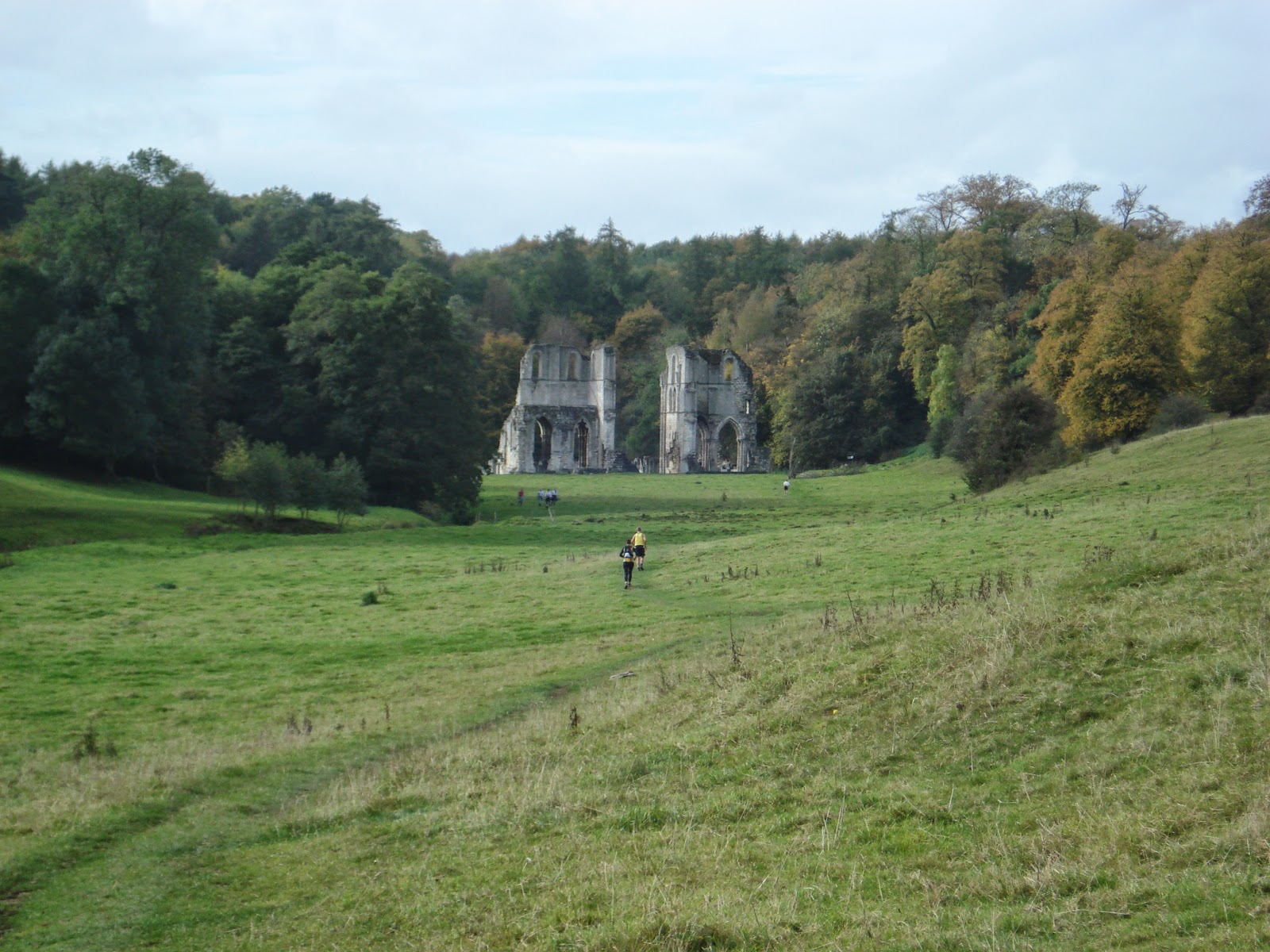 Roche Abbey looked attractive in the afternoon sunshine and I caught and overtook a couple more people. 61km done and turn to the last page of strip maps! The 5km to Maltby passed quite nicely and it is on grass or small paths. At this CP I knew I needed to eat but could not stomach what they had on offer. I knew it was a bad idea but I pushed on anyway.I would have killed for a pizza or meat pie. My climb up through Maltby was pathetic but I managed to pick up once we left the tarmac, plus I spotted Splatcher ahead now. I didn't really feel like it but slurped some gel and water and cracked on. I refused to let Andy pull ahead and tracked him and a distance. It got me through Micklebring and under the M18. Climbing the stiles there was painful but my body was grateful for the sugar of the gel and I caught Andy in the next field. We muttered how tough it was to each other and I tried to push on. I had more gel and slowly reeled in a couple more runners as we crossed the ploughed fields and kale to Firsby Hall farm. The rutted stone track down to Hooton Roberts was not as bad as I remembered and neither was the climb out of the village. I passed Sharon here and knew Old Denaby was not far. A herd of shaggy cows guarded the gate at the top of the lane but luckily they all moved when I slammed the gate and they did not chase me down the field to the last CP. I was now an hour behind last year's time but at least I thought I would finish. I cursed them closing the level crossing and swore at the steps up and down the footbridge. The canal and river paths are good and only 5km to the end. We skirt the edge of Swinton, follow the remains of a bit of canal and then head over open land on good paths and cycle track to the sports centre. The last bit is easy to run as you can see the floodlights on the sports pitches and know the end is close.  There is always a small crowd at the finish and a lovely lady finding us bags for muddy shoes and doing waitress service with cups of tea! As I sat and tried to ignore my throbbing achilles Nigel appeared. He had completed his grand slam and so was understandably happy. Then Emma finished so her grand slam was secure too. Well done to the two of them. Andy finished as we were sat chatting and he looked more wrecked than me.  I moved indoors for food but then missed the prize giving by going for a very welcome and much needed shower. It was good to chat with Nick and others but I was tired and needed to drive home before I felt too wiped out so I missed Dick. The winning ladies this year were only just over 8 hours so great runs by them.
I arrived home to find cars all over the place and what seemed like hundreds of young people wanting a party. I eventually got the van on the drive without running anyone over or hitting the car. I was glad I had showered earlier and could go to bed with minimum effort. I was more dehydrated than I had realised and could not figure out why I felt like I had a hangover. 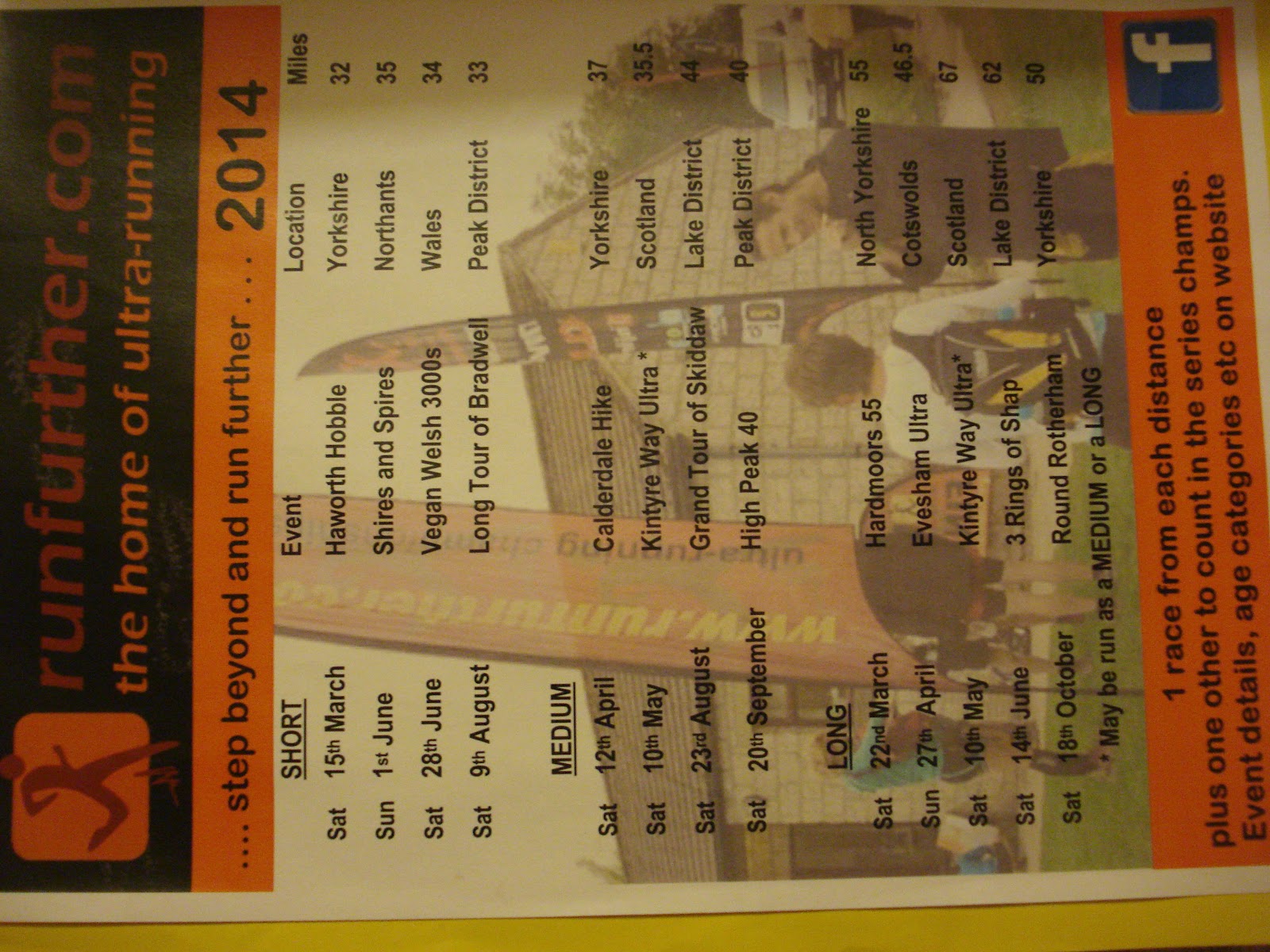 Runfurther 2013 2014 (thanks Nigel for spotting that error) series complete and I think we have done a good job of keeping the ultra series going. Only a few days and we can announce next years races.
Posted by Ultras and a lttle bit more at 12:08