Not  even mid April and this would be the third event in the Runfurther ultra series. I love Nav 4 events - low key, tough, great support and wonderful food afterwards. To top it all off the forecast was superb. Well before registration we were parked up with flags, banners and display boards erected and lazing with a cup of coffee in the sunshine. 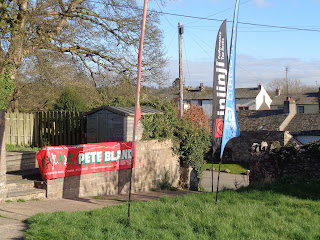 Being asked to supervise the car park gave me an opportunity to chat to everyone as they arrived and also to sign up a few more for Runfurther.
We ignored the temptation of two lovely village pubs and after a meal in the van and socialising in the hall we turned in for an early night.
Our alarms went at 5am and as I struggled out of bed I spared a thought for friends driving up on the day and the even earlier start they would have. The dark was chilly but I knew it would be hot later and I opted for shorts. I wasn't alone. To keep it quiet and allow the village to sleep we were herded in the hall until the last minute and then a hushed group assembled outside the Queen's Head before being told to 'Go'. Those arriving on the day had parked down by the river so I only had a hazy idea of who was running. 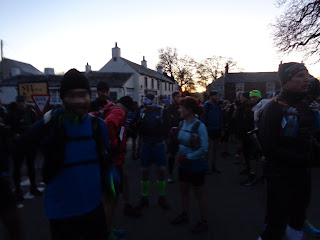 Nick, Dick, Charlotte, Aleks and the Mercia crew were there on Friday night but I met Linda, Elise, Sarah and then Albert, Josie and Mick on the start line.
I started very conservatively and as usual struggled on the first, gentle, uphill. Josie seemed to shoot off ahead and I made a determined effort to keep Linda in my sights. Before many minutes we were off the tarmac and out onto the common. A group of horses guarded the gate but they were friendly and only one runner seemed reluctant to pass through. 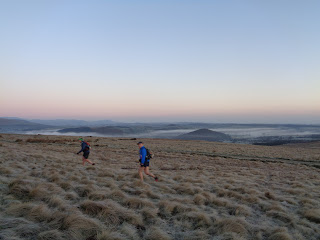 A toilet stop on the common let Linda and others get further ahead but I consoled myself that it would be a long day and with no prizes for being first up Loadpot Hill. I surprised myself and before the first CP I had caught many of those who had overtaken me. Albert stopped for a loo break too and this allowed me to catch Josie. They were having a 'steady' day showing Mike the route. Bizarrely I was now first lady. Hmm, not at all what I expected. 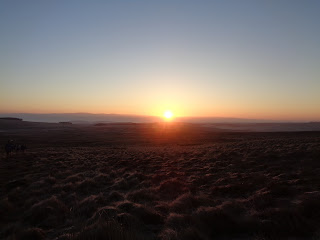 As we climbed steadily the mist over Ullswater was replaced by the sunrise over the Pennines and then fantastic views along Kidsty Pike and across the rest of the Lake District. 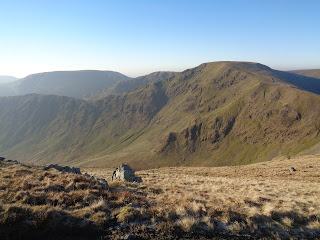 Helvellyn was a hard pull up but we were being encouraged by the front runners passing on their way down to The Knott. 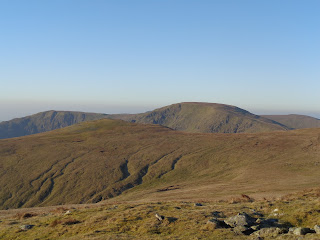 Vandals had stolen the self clip on High Street so after a very quick search we shot off on the next section.
Turning and then arriving at The Knott and the lumpy ground en route to Angle Tarn brought even more amazing scenery into view. 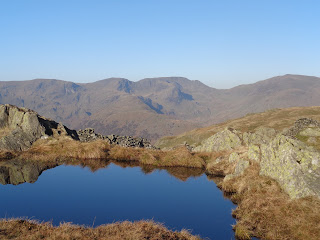 I didn't care about minutes wasted I just had to stop for photos. 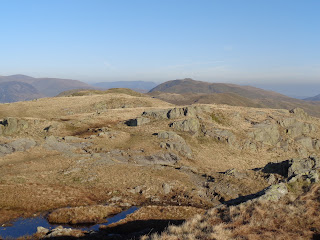 I enjoyed this section and got some good lines on softer ground. On the smaller isthmus there was a tent and I suspect they were still in bed. Out needle punch was on the big boulder on the first isthmus. 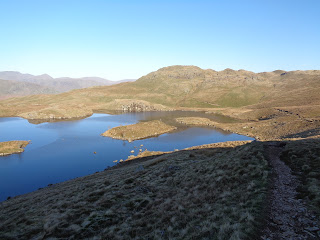 The path from here to Boredale Hause was wonderful and Travs from the FRA forum introduced himself. I lost a little bit of time on the descent to Side Farm but not too much - thank god for dry rocks. Real food at the George Starkey hut perked me up and I grabbed what I wanted and set of jogging and eating. Being speedy through CPs and feed stations can save huge amounts of time over a day. 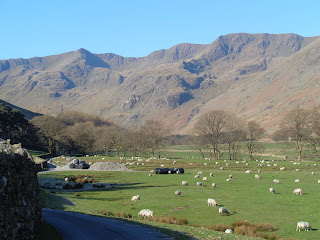 I caught two runners as we joined Grisedale Lane and then concentrated on sticking with them and even picking off those ahead. The views into Helvellyn continued to amaze us and made the climbing seem easier. It was warm now and very sunny but not too hot. Once above Grisedale Tarn the half dozen or so of us fanned out in all directions. Some stuck with the Raise Beck path but I am not a fan of those rocky steps. I had hoped to pick the easy way diagonally over Willy Wife Moor but got pulled a little too high and had to track back and then down the forest edge. It was still preferable for my feet to be on the soft ground. Tom and his van were a welcome sight at the Wythburn church car park. I stopped to drink and fill my water bottle and again grabbed cheese and savoury snacks to eat as I climbed. I decided to ignore the OCT line and stick with the tourist path. 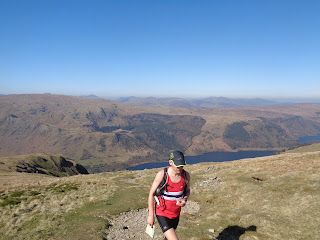 It was the right decision and armed with food and the camaraderie of a young guy from the NE I seemed to power up the tourist path. Then I spotted David up ahead. I had run with him for some of the Fellsman and was pleased to catch him as I had not seen him since Loadpot Hill.
I used him to 'tow' me up to the trig point on Helvellyn and then along the ridge , down and up to Whiteside.
It was busy on the tops and yet more and more stunning views kept appearing. The path down starts well and then as it swoops in zig zags there are some wonderful grassy short cuts. Out of water and thirsty I was pleased to find a stream and fill my bottle. 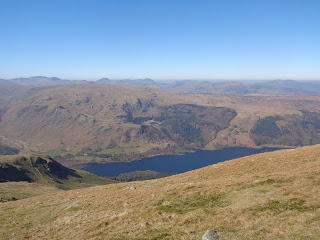 The main valley path was stony and my feet started to suffer. I tried to stick to the verges but then they ran out. 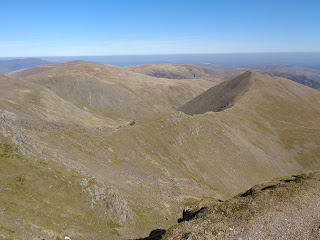 All the others stuck to the lane but I turned right into the fields and across to the campsite to give my feet a rest. 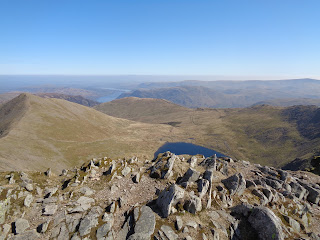 We all arrived at the road together so there wasn't much in it. The CP at GS Hut was our last chance to refuel so I stopped for melon, oranges and then grabbed more cheese and savouries for the climb. I had not set plan for Place Fell but now knew I would stick to the path most of the way to Boredale Hause - it's further but easier. I don't think I could have climbed, breathed and eaten on the direct ascent! 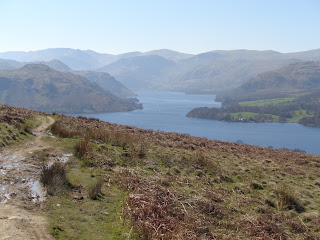 Part way up Place Fell I found a dejected Andy Ford - a bad stomach meaning no energy had floored him. I tried to encourage him and he did stand up to try again. The Trig point is quite a pinnacle and I had to almost fight my way through tourists to the needle punch but I had beaten those on the direct route. I had now stopped taking photos and was clearly in race mode because I took clever lines from here to Martindale church and overtook another two runners. My foot wasn't happy with the steep drop to Howtown but I pushed on, found water and concentrated on picking off the miles. I had a list of CPs and miles which when I checked suddenly showed me there were under 6 miles left and I was way up on time compared to the only other time I had done this race. This boosted my spirits even more and off I trotted doing mental maths and working out how good the PB could be. Arriving back on the common I could see a runner some distance ahead. They too were running most of it but slowing to a walk every now and again. By the cockpit I knew I was gaining so I pushed harder. From the fell gate it must be less than a mile. The verge was great, the rocky lane hell and then the tarmac meant the end was close. I didn't quite catch Matt Neale but spotting him had pulled me along. 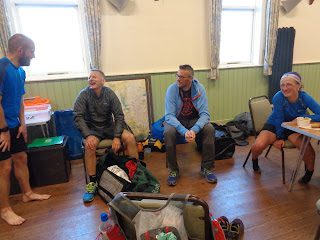 I was so chuffed to finish. Shattered but a PB by almost 75 minutes. Time for lots of carrot and corriander soup, real bread, countless cups of tea and cake. I couldn't get the shower to work but Jill gave my a bucket of boiling water and the use of the disabled toilet room. Clean and changed I settled to more food and then moved to the sunshine outside the pub with a well deserved pint of Wainwright. I spent a very lazy evening chatting and waiting for Bob. I did think about walking to meet him but my legs were tired and I had no real idea of when to expect him. He arrived, with Charlotte after about 15 hours, and happy that the Grand Slam is still on. 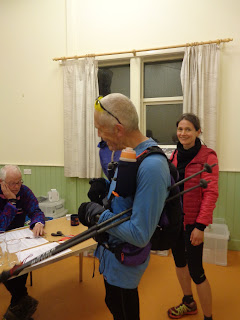 Dick arrived much later having gone awol and then struggling with a nasty path and navigation issues. 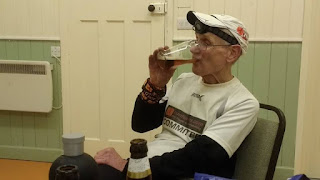 But he did get a right royal welcome and a beer. 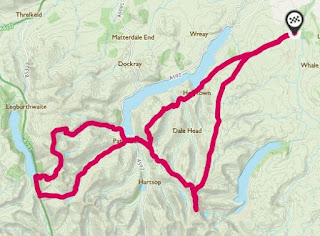 What a great event, organising team, wonderful Off The Grid catering and such superb blue sky weather. One to remember.