The first race in the Runfurther series, as usual and the first important race of the year for me. It might be the only 'short' I can fit in so finishing was a must!
I have done some running since my NT recee but not as much or as many long runs as I would have liked in the 3 preceeding weeks. I am not quite sure why just think it was a mixture of weather, climbing and planning other events we are organising. 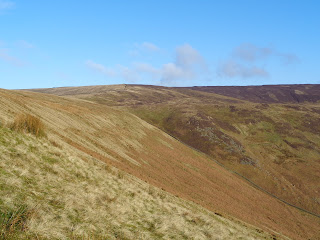 A 27km run over Totridge and the Bowland Fells was so wet and boggy that it lasted hours but didn't on one section involve much running. 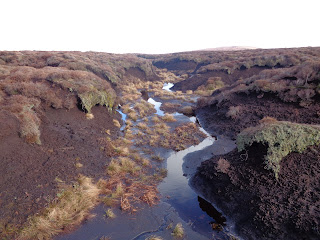 It is one of my favourite areas though and always very quiet if not deserted. 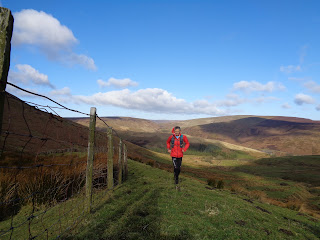 That day I met a friend I had not seen for ages but very few others were out. I did have a 25km faster run over Longridge Fell and the Hodder area where I got icy cold feet in the first 500m and never really warmed up 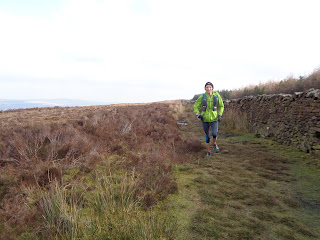 but where I explored a new to me path which is always nice and some steep steps for future Hardmoors training. 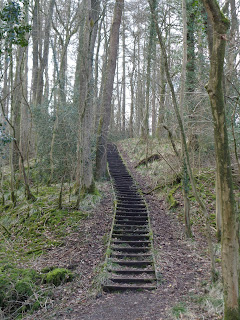 A run of about 20km from Tockholes with lots of climb up and down through the woods and over Darwen Moor followed this. 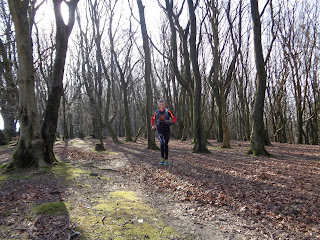 Spring was definitely on the way with catkins on trees, snowdrops, crocus swarms  and some very early daffs. 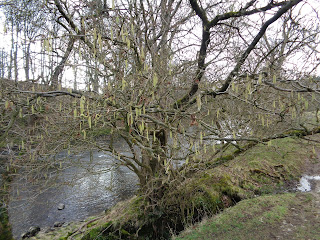 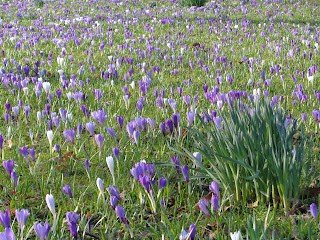 Then I managed to cram in a 40km from Brinscall which was lots of running until I ventured onto Anglezarke Moor and what I hoped was an interesting short cut. I should know by now to avoid the tussocks but the path I was on just seemed to peter out in front of me. 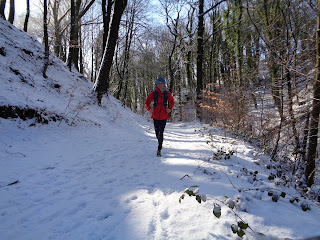 There was a wonderful run in the snow and sunshine on Longridge Fell when I didn't dare to drive on the snow filled lanes and get to bigger hills. The tracks had a good coating but were very runnable and apart from one mountain biker I had it to myself. 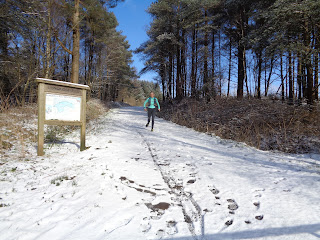 and when everybody in the world seemed to be out running in deep snow and having a wonderful playtime. We rarely get much snow here. 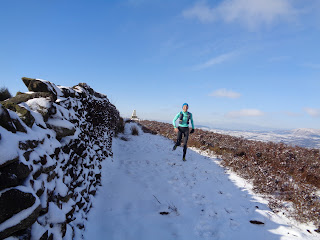 It was clearly daft to try to recee the North York Moors section of the NT when I had hoped to given the snow and the forecast so we came home and I had a long hard 4 hour run from Southport through Ainsdale to Crosby and back. 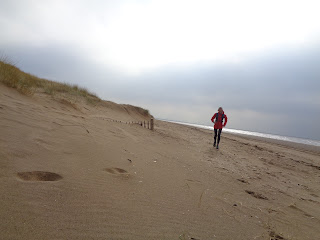 It was ages since I had run here and I had forgotten how beautiful the pine forests and the sand dunes were. 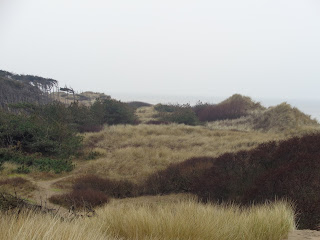 Yes west Lancs is flat but the dunes also mean there are lots and lots of  (small) hills and soft sand so it is not necessarily an easy run. I did see a red squirrel but was too late for any deer. 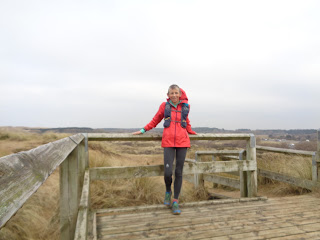 Looking back on this and reflecting that the time also included lots of climbing, some gym trips and two hard and fast Street O events perhaps my preparation wasn't so bad.
This would be my 10th Hobble and it where my ultras started. Driving over the moors from Colne involved some interesting lanes with banks of compressed snow restricting the road to single track but we arrived safely and put up the Runfurther banners in the dark before settling down to supper and our bed in the van. The forecast was not great but the rain reduced in volume at dawn and it was milder than in recent weeks. Having erected the flags, set up the display boards and handed over mint cake, prizes etc I wandered round chatting to friends. The event was a sell out again and I know about half the runners I think. As has become the norm I was anxious about whether my 'not a neuroma' would pan out and whether the shoes I have discovered would work out.
The route is ingrained in my mind now and the terrain is very mixed. Even in the first 8 miles or so of the 32 mile route there is a mixture of tarmac, track, gritstone path with rocks, peaty mud, flagstones and loose gravel trail. In total there is 1588m of climb according to my Epson gps watch and with all the recent snow and rain the ground was as waterlogged and muddy as I can ever remember.  Fortunately most of the snow had melted until we were on the last few miles over Top o'Stair and even here it was mostly easily avoided.
The start is a punishing climb up the main cobbled street in Haworth and then out on a short section of road before the track and path to Bronte bridge. I was being cautious here and other runners including Mark Dalton took some big falls. Withins ruin soon passed and then it was the flagstone path down towards Widdop. 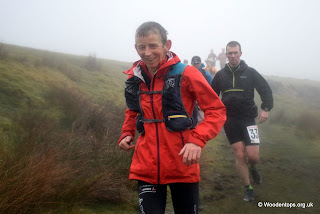 At least the stones were not icy this year! I am becoming more and more of a wuss on downhill rock of any sort so I let people past me  but was also starting to suffer with my right glute/quad area. I had to let mark and others race ahead and plodded on towards the CP near the dam. The Bradshaws of SportSunday were out and so that made me smile and run (for the photo) 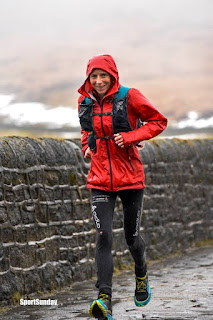 but I was starting to suffer and feel that I was useless. The climb up onto the moor seemed to drain me and even when it was slightly downhill my leg was objecting. Rachel and Tony ran by and I felt that I was rubbish. Not sure whether I needed to eat more or what? I tried to talk to myself and be more positive and by the time I reached Long Causeway I was in a slightly better place. I grabbed some food and walk/ jogged up the road eating.  A quick chat with Rachel as we passed the muddy farm and the next CP appeared very quickly. Things were improving so I grabbed a sausage and ran on. At long last I felt like I was getting somewhere and I was also starting to trust the grip on my shoes more. I started to overtake people and was complimented on having better pacing- if only they knew there had been no choice! and how low I had felt. The very muddy section before the golf course CP was no worse than usual and I ploughed on to the valley floor. I ate more food on the climb to Lumbutts and was rewarded with jaffa cakes and whisky at the YHA CP. There can't be many races where you can write that last sentence. Last year the race had been used as a trial for a trail team selection and seemed very busy. 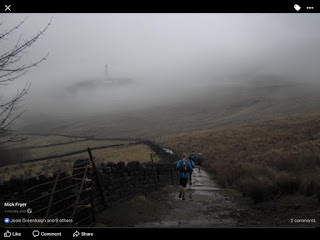 Today I was alone on London road and could only see a couple of runners up ahead as I climbed to Stoodley Pike. Mick Plummer emerged from the mist and gave me a quick hug but I was now chasing a young male runner and shouting nav help for him so I could not stop long. We ran well together all the way down to Hebden and up to Heptonstall. Often I am timid on the rocky path down to the valley floor but today I was pleased to run it well. I had caught Alwyn and was determined he would not get away again. I refilled my water at Horse Bridge and grabbed more food. My young friend steamed off but even though I mostly power walked I kept up with Alwyn. The weather was improving and a merino wool thermal plus my cag was getting too much so I had to stop and take a payer off. It cost me seconds which would prove vital later but never-mind. Once over the crest I managed to run well to the final CP and then there is a steep road. Continuing my power-walk I left Alwyn and set my sights on catching others as we headed up Wessenden Moor. I was ashamed not to be running more, especially when I met a friend out supporting, but I was actually catching people. Avoiding the compacted snow took a few more precious seconds and I tried to make up for it as we descended the other side. That was fine all the way down the rocky track and gravel lane but when we reached the tarmac my legs just said' no more'. It was a slow slog up the road to Penistone Hill and I knew that trying to stay under 6 hours was going to be touch and go. I did run the whole of the descent and through the churchyard etc but arrived in 6:00:40. Ah well, another PW on top of last years although in the end only by about 6 minutes. Checking the results later it seemed many times were slower and the gap between me a slightly faster friends had not got any wider so that is some comfort. As I sat drinking tea and eating donuts I had to admit that my foot had behaved and so the shoes seem a success. Shame Inov8 don't make them anymore! I also had to admit that my legs did not feel as tired as they should and often do - ie. I should have been running harder. I did try but from Widdop to Long Causeway I just could not find the energy and on the last slog up to Penistone Hill muscle power deserted me again. I felt slightly awkward accepting my prizes as 1st WV50  (7th W) but I guess you can only beat those who turn up- which was fewer fast runners this year as Edale English Champs race was the next day. Some friends had tougher times and were even more despondant... I guess we are all getting old.
A bit of a rushed report but we have two O events to plan this week, plus a prize giving and we need to pack for skiing and climbing in Spain.
On a Runfurther note... the Mountain Fuel prizes were very well received in addition to the usual goodies from Ultimate Direction and Injinji. The Romneys mint cake also vanished very quickly.
Nick tried the MFuel and liked it so that is another convert. I had it in my water but as it was wet and cold I did not drink enough so a lesson learned there.