A weekend of lessons

The forecast was good for Saturday so at the last minute we entered the LDWA One foot in the Gargrave. We drove across on Friday evening and had a comfortable night in the van. It was a leisurely start at 8.30am so plenty of time for breakfast, toilets and chat. Neither of us had done the route before and entering late left less time for studying the map than usual. 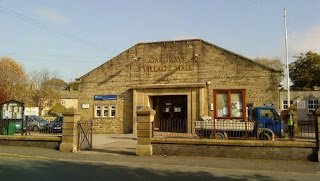 As we congregated outside the village hall it was chilly but with the promise of warmth and sunshine. The start was flat and fast. Before long I realised that the front guys were going at about 8 mph and there was no way I should even contemplate staying with them. The tarmac soon gave way to old tracks and friendlier surfaces. It was getting warm. Heading towards Otterburn I was able to stop two lads going wrong. They like us had found a route on line- but it was an old one and would not have taken them to CP1 this year! We actually ran a fair bit of the route together, but not all of it as will become clear. We made a slight error and some huge iron gates that looked private, but within a minute or so we were back on track. The next fields were soon crossed and the views up to the hills above Malham were wonderful. For me 23 miles was fairly short and so I did not linger at CPs. 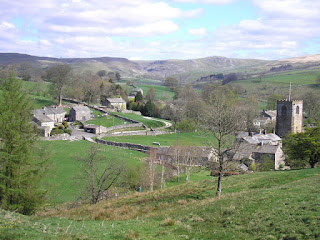 This meant I entered Kirkby Malham alone and ran on towards Hanlith alone. I am not sure what happened next but I had my head down stopping up the tarmac and thought I had missed the sign for the Pennine Way but I found a gate and what looked like a path heading in the correct direction and guessed I could make it work. 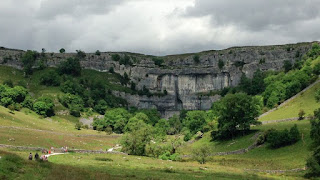 Lesson 1- turn back or stop and sort it out as soon as you know it is not correct. Ironically this was my first race with my first ever iphone with the route downloaded on it and a little red icon that would show exactly where I was. Where was the phone? deep in my sack of course. So instead I ran on keeping an eye on the river below. Then after 200m came a wood. I opted fora way in near the bottom and then a trod climbed. If I had opted for the top I would have met the path. Instead my trod became more and more precarious on higher and steeper ground above the river. Eventually the inevitable happened and my feet slipped. Using all my fingers to breake helped a bit but I would have been in the river without the aid of a tree. Next job was getting back to safe ground and rejoining the route. 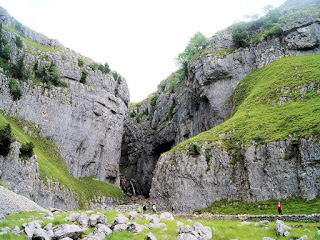 Yes, it would have been much faster (and safer) to stop, check my phone and find the Pennine Way. It meant that from this point to Janet's Foss and Street Gate I was playing catch up and trying to calm my pounding heart. 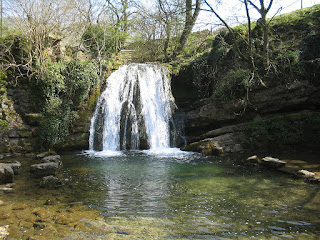 I did stop at the Street gate CP for a few minutes to replenish water and grab some food. I then trotted off with the two lads again having left Kevin and others laughing at my error. 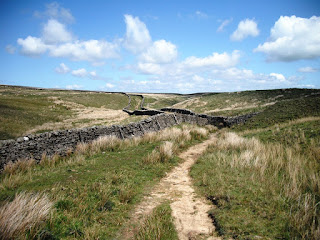 Mastiles lane and the grass paths on the high limestone were superb for running and I really enjoyed the route. We were joined by an older chap who had done the route before. We made a slight error after CP4 but rejoined the route after about 2 minutes at the gate posts with the knomes. It was then all down hill and fairly fast running through fields and woods to gain the outskirts of Gargrave. A short road section led to the canal and thankfully just 400m or so of tow path. 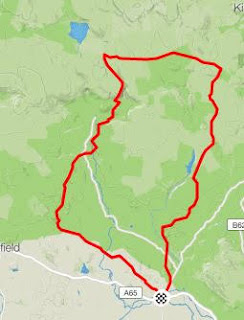 I was back in 3hrs 58 or 3hrs 48 moving time and quite pleased to beat the 4 hours, especially after my adventures. Now I need to go back next year and without the 3 errors try to get 3hrs 40. Don't laugh, I'm told it's good to aim high.
It wasn't that hot and I had drunk during the run but it took me many cups of tea to rehydrate. My big regret was not taking my camera as the views were awesome.
Sunday saw us helping our orienteering club at the Lancaster urban event. Bob wisely helped at download and did not run. I helped at the start but was keen to have a run if the weather stayed kind. I knew I would be stiff from the day before and also very out of practice at reading the fine detail on an urban O map never-mind planning my route once in oxygen debt. Cp1 and Cp2 were fine; in fact I was fastest out of 10 women on my course to Cp2. By Cp4 my running was obviously faster than my brain could work. I arrived where the kite should be but couldn't see it. In panic I ran off trying to figure out what I had done wrong. Nothing; I should have stopped, stood and looked more carefully as I found it 5 minutes later in exactly that place. Lesson 2 Don't run faster than your brain can navigate. All this panic then let me head off to the canal with the map upside down and 180 degrees out. At the next canal bridge there was water on my right plus a path with wall and bushes to my left. Just as it should be.... but not the correct bridge. Lesson 3 - USE your compass. I realised my mistake and pounded the tow path but another 5 minutes had been wasted. 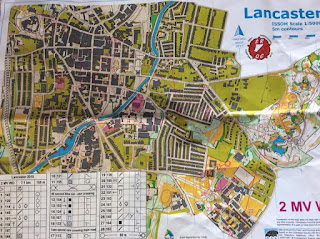 Cps7-10 went without mishap, possibly because as I was getting more tired I was running just a little more slowly. The the map scale threw me and I arrived at the timed road crossing without being aware of it. There was no traffic and I was running fast down hill. I had to cross back, dib Cp11 and then cross to Cp12. The alleys and ginnels of the town centre had worried me but I navigated them without error. The climb back up to Williamson Park was tough but I remembered the multi level paths there and was soon back on the St Martins Campus for the final few controls. Lesson 4 get some practice on a relevant map before you try a competitive run. I really enjoyed my run even if bits of it were rubbish. I never was s printer and for me 10km is a sprint but at least I was in the top 3 to 13/28 controls and 4th to another 6 so it wasn't all bad.
Posted by Ultras and a lttle bit more at 09:04