Race 4 in the Runfurther ultra series and the 57th running of the Fellsman. For me it would be my 7th time on the course. Pretty sure many of us will be asking at various points "Why have I signed up for this again?" and will then promptly forget the tough bits, decide we loved it and sign up again.
This years course was to be altered slightly as one landowner decided we must not cross even the southern boundary of Fleet Moss. It would involved several miles on tarmac, including a steep downhill, before the extra 300m+ climb back up to Middle Tongue CP. It can't be helped but it was not going to be popular with many and I wasn't looking forward to it.
Friday evening did not start well. After a morning of climbing we raced home for a quick shower, food and to grab our bags. The journey across was uneventful and the weather damp but not awful. Arriving before 4pm and with plenty of time to put up flags, banners etc before runners started to register Bob realised he had left vital clothing at home.
I leapt out with all the Runfurther gear and he set off on the return drive home and back to Threshfield. At least it was a possible and not a totally insane drive. Once the flags were up I pottered about the very warm school drying out and helping to set up tables etc where I could. Nick sadly was having a worse evening. I didn't know it then as Threshfield has no mobile phone signal but he was suffering vertigo attacks severe enough to force him back to home. A real shame as he had hoped to complete a Grand Slam this year. 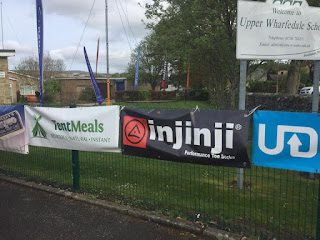 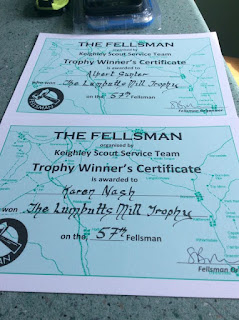 A good nights sleep and a Fellsman breakfast set us up for the prize giving where we managed the Vets Team Prize. Old but not Dead Yet.... Julian, Karen, Albert, John, Mark and David. Fab. My ankle seems to have lost its bone and gained a rather impressive swelling. 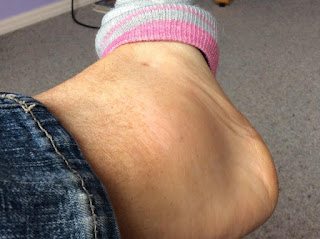 I think I just ignored it during the race but walking on Sunday was dodgy as it stiffened up. Climbing on it today wasn't great but hopefully it will mend fast. None of the photos are mine so thanks to Sportsunday and Fellsman facebook. The big question is can I manage the next 3 Fellsman so that my 10th coincides with their 60th and my 60th birthday?
Posted by Ultras and a lttle bit more at 11:08