My third time at this event so I knew what to expect. If I had planned more carefully it would have been good to have this as No26 and half way but it only occurred to me too late. Someone did suggest that at 61 miles I could make it 25 and 26 but that would be cheating. 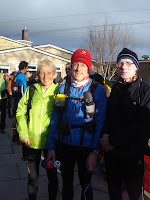 I had vowed last time that I would not sleep on the sports hall floor again but memories fade and our campervan is of the road. It was good to be sociable and sit and chat plus they had cured the sweaky door. I had eaten at home so I had little to except kit check, pack and discuss possible routes with people. I had opted for a civilised 7am bus but after 5am there was little chance of real sleep.  In the hall at Ingleton I met up with more friends and we were all relieved that it was not as ferociously cold as last year. It only seemed minutes before we were being herded outside and down the steps to our first 'clip' of the day. 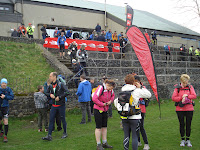 By 9.05 we were off. Maybe we were less reckless this year but I made it all the way to the end of the tarmac before I was reduced to a walk. As we climbed up Ingleborough we were well strung out as we settled into our rhythms for the day. I felt quite strong and enjoyed the runable bits until the 'steps' slowed me down. 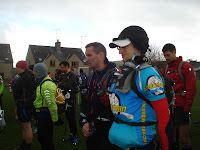 The marshalls on the top looked cold and there was some confusion about whether we only had to be clipped or if we were meant to swipe the new timing chips. The snow had vanished from the NW face but the rocks were wet and greasy. I lost about 20 places going down but never mind, I did at least arrive at Hill Inn in one piece. Dry biscuits aren't my thing when I am running so it was on, on to Whernside and a bit of effort to regain some places or close the gap. 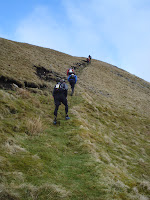 The marshalls for the PPP were in place and chatty and it was great to see Suzanne (last years organiser) near the top. The front runners were already descending the ridge as we plodded up so we could see what a gap had opened already. It was nice running down shouting encouragement to others on their way up. I blasted down towards Kingsdale until a tweaked an ankle and then took a more cautious approach. There was a cameraman by the river but there was no way I was risking a soaking this early on and I picked my way carefully across. Here I had caught up some who had passed me descending Ingleborough and maybe that alone should have been warning that I had put in too much effort too early. 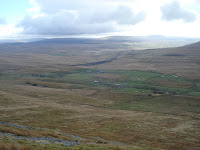 I also struggled to eat the rather dry flapjack, gave up but failed to eat anything else. My plod up Gragareth got slower and by the time I got to the top I suddenly seemed empty. I had been looking forward to the ridge run but my legs felt like jelly, my stomach ached and I was tearful. What the heck!! Jon had warned me I would get slower with all the miles but this felt much worse. After some strong words to myself and some concerned glances I slowly got my act back together and worked on reeling in Jon Steele who had gone steaming past me. He got to Great Coum before me but did not know the way so we ran down to Dent together. 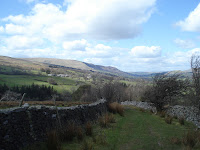 He was flying and I was struggling to hang on, especially on the stony track towards the end. My pit stop here was also swift and I almost got through without clipping or swiping. It seemed tropical down in the valley but I knew I could eat and drink as I set off up the lane. Before long I met Julian and we chatted until he pulled ahead. The craven way track stretched out into the distance but I could see runners up ahead and worked on closing the gap. 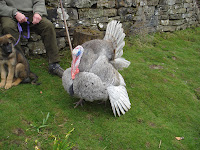 I managed to join them just as we left on the rough path and the boggy descent across to Blea Moor. I was feeling better and made good time on the descent into the woods and to Dent Head Farm with the rather imposing turkey. I was still overtaking or catching some runners and now in a quandary about food. I felt better but knew I really should eat. To have pasta or not? I know Nick is convinced it is not a good idea but I liked he idea of something savoury. 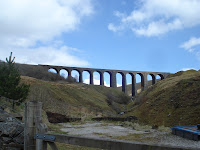 I arrived at Stonehouse to find fellow Krypton member Darren sprawled on the grass making the decision to retire with a pulled muscle. Shame as he had been going well. I also caught a glimpse of second lady as she finished refuelling and set off. The pasta slipped down fast and I let the marshall check my kit as I ate. Then it was off up the lane beside Artengill viaduct and the beacon to Great Knoutberry. Half way up the lane I ran out of water so I picked to biggest stream, refilled and prayed there were no dead sheep on the fellside. 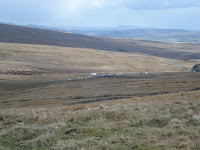 Encouragement from descending runners helped my up to the checkpoint and then it was relatively easy running across and down to Redshaw. It was here that I joined Chris H and although I did not know it then I was to stay with him until the end. Refuelled with a hot dog and cup of tea we were of. Chris has done the event more times than me and it was good to join someone who was confident with the route and knew some  different lines. More food at Fleet Moss set us up for the next leg. Julian appeared as we were leaving but it was Wharfedale Paul that we ran with from here to the end. 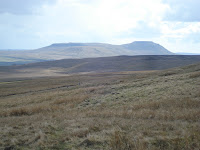 We didn't find the perfect line below Oughtershaw Tarn but picked up our forth group member and located the tent on Middle Tongue with no problem. We were moving well and celebrated with a group wee just before Cray where we were officially grouped. I knew it would get cold now the sun had dropped and put on my warm layer and my cag, gloves and hat. By the summit I was glad of them. Another group departed at the same time and we toiled up Buckden Pike together. 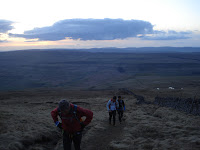 Chris and Paul took us on a different line from the memorial and we caught the other group at Starbotton. By Park Rash we needed head torches and more fuel- rice pud this time. It left me feeling sick again but as I got going I felt a bit better. I had been dreading the climb up Great Whernside as I had bonked here on my first event but was more gradual than I remembered and not so bad. The marshalls on the top tried to direct us but seemed to be sending us too far right. We ignored them and stuck to our plan of finding the big cairn and fence and although we were now moving more slowly it went well. 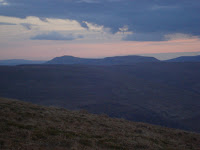 (I might recee a rapid SW descent to pick up the footpath my Langcliffe pot if I remember?) By now we knew the end was in sight and I had started looking at my watch. Despite the bad time earlier I was hoping to break 15 hours. It was possible but not likely. I pushed the pace as much as I could but Yarnbury never seemed to get any closer with lots of beacons giving false hope. We over took the other group and they wished us well. By the time we hit the road I knew we couldn't do it. We degrouped and Chris got second wind. He charged off towards Grassington and I tried to keep up. The upping of pace shocked me and on the descent my knees and quads were screaming.  It was a struggle but I tried to keep the gap between us small. Suddenly there was just the climb from the Wharfe back up to the school and it was over.  About 15 hours 12 ish? Job done and the weather had been kind. My shower seemed to take an age as  performed everything in slow motion and then fell into bed. 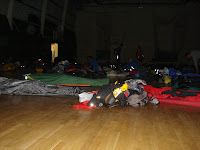 I was flat out and zonked for the next few hours. I did not even hear people creeping into bed on either side of me. By 6.30 I could sleep no more and got up in search of breakfast and a mobile signal.  I ate and drank many cups of tea with Jon, Jen, Chris and others, all with their own stories and ideas for their next adventures. Thanks for the company and navigating Chris. Jon you know you want to come back and improve on your time- you loved it really. Mick- I hope you get your stomach sorted and can do it again next year.  I'm tired but happy- completed and only a few minutes longer than last year.
Posted by Ultras and a lttle bit more at 13:38