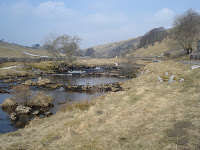 Then plan had been to run on Tuesday but my legs were too tired, so instead I went on Wednesday. Knowing that I had to be back for a birthday meal out with the family had me checking my watch often and in a bit of a panic when I was in deep snow and the minutes were ticking by. Despite this it was a grand day out in the sun and the snow. It was so quiet. 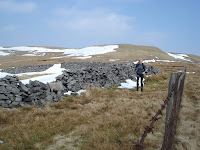 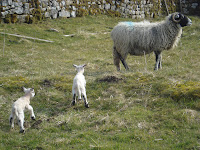 I parked in Buckden and set off northish along the Dales way. This got me nicely warmed up and also got some miles under my belt early on. What a beautiful spot. There was nobody else in the car park and I did not see anyone to speak to for over an hour. Very calm and peaceful. 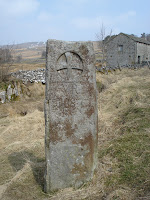 There were lots of tiny lambs, especially around Hubberholme and I imagined converting one of the many barns into a house. Oughtershaw seemed like a pretty idyllic place to live although I suspect it was cut off in the snow last month. Here I left the Dales Way and used the road to climb up towards the Fleet Moss CP. In the end I never got quite that far because I spotted a trod leading steeply up to the edge of the moss and the fence line. Here I picked up several sets of footprints and the most recent looked like another set of fell shoes. 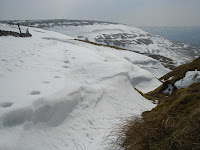 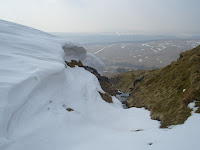 Unfortunately the snow was thawing just too much at this height and it was slow work plodding my way through. I thought it would improve when I reached the quad bike track to Yockenthwaite Moor but although there was less snow here it was starting to get wet and boggy on Cray Moor.

Gilbert Lane was full of compacted snow and I was able to make better time, albeit cautiously as some crust supported my weight but not all of it. The grass on either side was almost snow free. 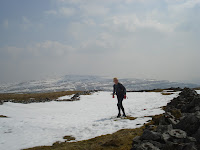 Here I met the first people of the day that were close enough to talk to. The climb up Buckden Pike was full of snow but fortunately it was higher and facing north so the crust was just a little firmer. The family coming down were having such a good time I was tempted to reverse my route and return that was so that I could have a go at sledging or bum sliding. The sun and clouds were taking turns all day and it seemed to turn quite grey as I reached the trig point. 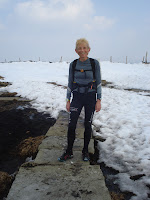 I was also starting to get short of time, so no chance of taking in Great Whernside today sadly. From the memorial on Buckden it was a rapid descent to Starbotton road and then the village itself. I had contemplated Top Mere Road but had seen it full of snow as I drove in this morning. Then it was the Dales Way again back to the car. The car park was now quite full but I have no idea where all the people had gone because I hadn't seen them. With a few out and backs checking for navigation I just managed my 28 miles and just as importantly got back to the car in time to race home for our evening out. It felt like hard work at times and seems to have brought out the cold that has been threatening for days. Hope I can get rid of that by the weekend!
Posted by Ultras and a lttle bit more at 14:09