I knew going back to work would be bad for me! Having been fit and well all year (except for sore throat/no voice on Hardmoors and the fractured ribs over the summer) I had suffered a cold all week.  Still, I didn't feel ill and if I had been well enough to go to work I was well enough to enjoy the weekend and run. Plus Bob had planned to come with me a do a mega bike ride. Wales is beautiful and empty but the drive down on Friday night did seem a bit of a drag. We had opted to go direct to the start and so had a relaxing, quiet and lonely night in a lay by near Llangurig. It did mean we had the luxury of a good nights sleep in the van and an hours lie in compared to those getting the coach from the finish. 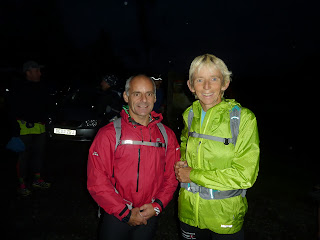 The drizzle dried up over night and it wasn't particularly cold even in the half light as we registered. I scuttled back to the van to study the map- a wonderful A3 waterproof affair with checkpoints,split distances, ascents and descents etc. The coaches arrived and I went to chat with Mick Cottam and others. 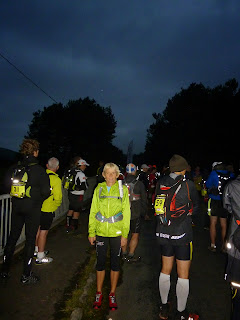 I had hoped to talk to Duncan and Dick but the toilet queue was struggling to cope and  even though they delayed the start by 30 minutes I now know some were still waiting as we set off. I am still hopeless at letting other unknown runners psych me out just by wearing the trendy gear. So by the start I was convinced it was going to be a bad day for points and I might just as well enjoy the day out and a new route. My cold was better than it had been all week and although my foot was still sore I had brand new 'Fellraisers' on. We were promised that the route had been well marked and I would say that was generally true. 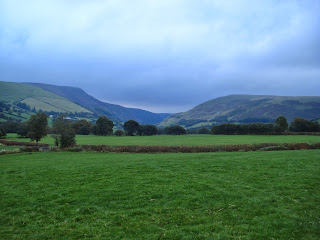 The start along the lane did not go off at lightning speed and when we hit the first off road and hill I was comfortable. True I struggled to breathe on the ups but it was OK. It did not seem long at all before we had wet feet from a stream and were dashing down the grassy and then bracken covered slopes to CP1. 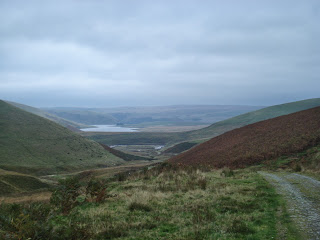 Then came another climb before a lovely run down to the river crossing. I had decided if my feet were dry I might go round to the bridge- I needn't have worried as both feet were already soaked, and stayed that way pretty much all day. The next 3 miles were on road but at least the views were great and the road almost deserted. I started to fall in and chat with runners going a similar pace and although we split for now we were later to run over half the race together. After Craig Goch dam we left the road and used the old rail track, so fairly flat and fast. 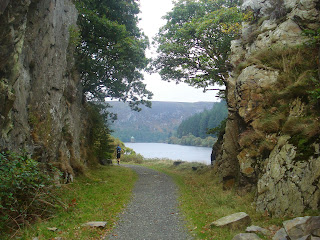 The group of us pushed the pace and were soon at CP3 where I glimpsed first lady? The next section started with a stiff climb but then contoured above the forest and across the fell sides, past but not through Elan village, and on to Llanwrthwl. The day was overcast but we stayed dry enough not to worry about a cag. It was cool on the tops but we did not really go very high and the valleys were warm. I was getting the hang of spotting the marker signs now although arriving in a field of kale I did have more than a moment of hesitation. I bet the Lakes were busy but this part of Wales was almost deserted.  We passed half way and dropped down the next CP. I was now regretting packing more real and savoury food. MCN races are great but water and gels at some CPs was wearing thin. The next section looked fairly level and straight forward, which is perhaps why as a group of 4 we missed a sign and ended up by the river. Fortunately after only a tiny bit of trespassing we arrived at a lane with a bridge and were able to relocate quickly. 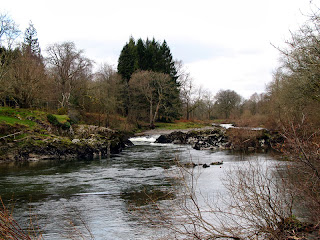 Nothing for it but to run back up the road and rejoin the route! It did make us more careful though. We were also pushing the pace and I was starting to dream of finding a pie shop in Builth! Instead we trotted through the park, smiled for the camera man and had yet more gels. We did again glimpse first lady. I left Builth without my pie but in good company as we set out on a very hilly section. The steep lanes were hard on the feet and quads but the grassy paths on the moor were wonderful. I was struggling but desperately trying to stay with my 3 new friends as the banter, shared food and pain killers as well as navigation were pushing us along at a good lick. We had another spot of nav bother, especially when we spotted the leading lady high up on the hillside when we could see markers low down. I felt bad but we followed our noses and stayed low. There were several arrows and even red and white tape so were sure we were OK and arrived safely at CP8 and traffic. 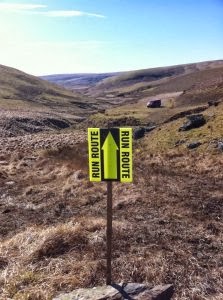 Less than 10 miles to go now and pretty much flat, although crossing the A470 was perhaps the hardest task of the day. I should have stopped to take more photos as the river widened , had rapids and then big fly fishing pools but we were on a mission and I was struggling to keep up. The group was great and I am sure we all had low patches where the others dragged us along. I seemed to be the weak link but they did not complain. We crossed the river to the eastern side for the first time to enter CP9 and the job was nearly done. My foot was now screaming and I really did just want to stop and walk. The lads were having none of it. There were huge numbers of gates and at every one they insisted on waiting so I had to keep running. With a mile or so to go I came close to telling them to *** off and leave me alone  but we ran up the road from Glasbury and into the adventure centre within sight of each other. Some joker had routed us over a large telegraph pole hurdle but there was the finish, at last. 50 miles (or about 51.4) and roughly 2200m of ascent. I scraped in just before 9 hours 30 and as first lady. It was much more than I had hoped for. I owe my 3 new friends many thanks for their good humour and companionship. I am so grateful they ignored my instructions to run off as I know I would have slowed down. Suddenly I was very tired. I hoped a hot shower would revive me. It took me an age to get myself organised but it did help and then I found the dining room for an egg butty and cups of tea. Sat there chatting I spotted Bob arriving in the van. He had enjoyed his day on the bike but the wind, rain and steepness had forced him to cut his ride short. I was just glad he was driving and not me. People had long drives so the prize giving was very fragmented. 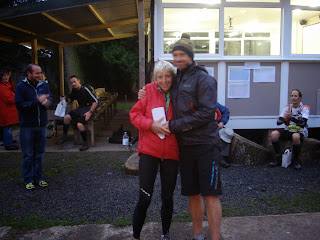 The drive back was even more of an ordeal than the route down. We stopped half way to refuel but were home not long after 10.30. A much happier day somehow than last weekend, despite a nasty run on my left ankle and very sore right foot.
Posted by Ultras and a lttle bit more at 13:43