Not an Ultra but MM number 3 this year

The OMM. Third MM this year and on the absence of the LAMM my first with a partner.I had also been determined to have another go at the A class and so needed to find a new partner prepared to do this. I could not think of another woman daft enough but Andy Splatcher stepped up to the plate and said yes. Brecon would be a trek but not too bad. We had hoped to take the van but the complications for that made it unviable and I am glad they did not allow us to take them up to the event centre mud fest! I have done all my MMs with Rowena or alone (except one SLMM with Pete Carter when Rowena was injured) so it would be interesting to run and camp with somebody different. The weekend started badly with me stuck in traffic on the M6 but I made it to Andy's in time for an evening meal before we set off. We were lucky enough to arrive in the dry and managed to get the tent up, register, buy gas and sort some gear before retiring to the tent.  We sat chatting and drinking red wine until bed. Our alarms were set early for Saturday as we had a 40 minute walk to a bus, then a 30 min bus journey and a 7.57 start. As we set out following the green glow sticks we quickly gave up all hope of keeping dry feet but it wasn't raining yet. We met up with Sarah, Wendy and others at the village hall and managed to use the loo before jumping on the bus. It was damp and windy at the Storey Arms but the marshalls were in fine spirits and John A helped us to check our start time. The elite were off to the east and Pen y Fan but the rest of us were heading westish. Andy is used to using an altimeter and I am not. We wasted a little time at CP1 as the altimeter suggested we were about the correct height when gut instinct told me it was off down the hillside. Although we were both navigating we seemed to miss some route choices (I must check route gadget and see  how many went east of Fan Fawr). Almost all the CPs seemed to have marshalls today and CP2 was easy given the marshall stood on the brow in a flouro vest! The next bit took us into a more complex area and then a longer leg  back to where we had been.  Just before CP5 the two Jonnys came racing by.  Again we agreed on route choice and only later did I see a northern option- who knows if it would have been better? We certainly didn't have the legs to follow the boys on their direct route. Andy was strong on the contouring descent and now it was me hanging on. We hit some desperate tussocks just before the final patch of forest and it was depressing to think about how much time we were losing. Then we got a boost as we met Sarah and Wendy in the forest. Unfortunately they opted to stay with the fence line and we ended up in tussocks again plus the pace was starting to tell on Andy. The map said river uncrossable after heavy rain. Sarah had said she knew it and thought it would be fine and it was. WE made a pyramid but actually I have been through much worse. Don't think I agree with all the H+S messages on the map though- Yes we know cliffs are dangerous and so are rivers when they are in spate. 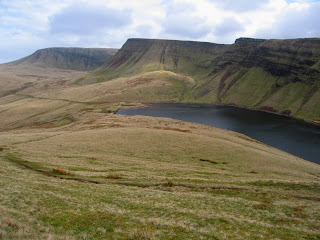 By the time we were plodding up to Llyn Y Fan Fawr the wind was getting fierce and we were moving slowly- some fantastic waterfalls though. We decided not to climb up but instead contoured round. It was further but we found some good trods and had a lovely descent to CP7. By now we were out of the wind and it seemed very warm in the valley as we raced down the track to the finish. We had lost some time on Wendy and Sarah but were lucky enough to download and get the tent up just before the rain started. What an evening of wind and rain. Andy gallantly took the back of the tent and we sat/ lay talking, dozing and eating. At last some time around 9 the rain stopped and we could escape out. We made a quick dash to the toilets and then I wandered down to the results and start times. I bumped into Rowena and Sue who felt they had done OK on day 1 and also a very tired Richard D and partner who had completed the elite but were back in the dark, wind and rain. The weather got worse overnight and there were several times that I feared for the tent. Andy slept almost solidly and only awoke at the very deep roll of thunder that took out some electric supplies in the valley.  Not making the chasing start meant we had a civilised start time. We were a little early and had time to chat to Mark and Josh who were volunteering. Bad weather courses had been put in operation and we were secretly rather glad. The wind and rain got worse as the morning wore on and the wind was blowing us all over the place on Fan Brycheiniog. It was a slow start up to CP1 and I was giving Andy hassle about our pace. 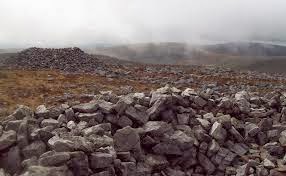 The rocky limestone to CP4 had us more evenly matched and then our shortened course kicked in. We tried to stay high to avoid tussocks but it put in an extra climb so was maybe not the best choice. Near CP9 Andy gained some second wind and led the way down to the control and across to Moel Feity. We found the correct pond after passing  a couple of red herrings and then it was just a long fast run to the end. Andy is much faster than me over tree routes and very deep mud so when we hit the final forest track it was me that was knackered. We finished together and generally pleased at having had a good weekend. My ultras seemed to have given me strength rather than making me knackered (so long as I do not need to sprint) but Andy is now convinced that a 50 miler a week before the OMM is not a good idea. Still, we didn't fall out despite a difference in pace and strengths. We shared the tent in good humour and I enjoyed an opportunity to do the A class again. We lost first mixed vets on straight time on day 2 by a minute, which is annoying, but were overall 3rd Vets once the age handicaps were applied. It was great to find Bowley Scouts dishing up gallons of hot soup and then to have our meal. I had a long chat with Jonny M who won the A and we kept bumping into friends. The cold wet clothes won in the end and we were forced back to the car to change. Then came the fiasco of getting out of the car park field. Thanks must go to the lads who pushed us so we could drive down to the gate and wait our turn for the tractor tow onto the mats. Thanks for a good weekend Andy and for driving. No photos- it really was not the weather for a camera!
JUst in case anyone reading this is not already aware.... I have set up a Just Giving page for donations to NW Air Ambulance at www.justgiving.com/Karen-Nash1)
Posted by Ultras and a lttle bit more at 09:21