I got a shock checking my list of ultras during the week. I had not done one on the Howgills! How on earth had that happened? I love the Howgills; I think the shapes are beautiful and you can run all day without seeing hardly anyone. A quick search on gofar reminded me of a challenge there- The Hravey Howgill Tops. I knew I did not have day light to do the whole thing as it took Tony Wimbush 12 hours but I could see  a way to doing 2/3 or 3/4 of it. Night O meant we were already near Kendal on Saturday evening so it was not a long drive to Sedburgh. We found a very quiet layby and then moved to the Cross Keys early on Sunday morning.
We were  out of the van and fueled by porridge and coffee by 8.20. I had thought about starting with Yarlside but it seemed a big climb to drop straight down again. Instead I ran up the easy path to Cautley Spout.
The mist was down on the tops but it wasn't really raining. At the top I got carried away and forgot to branch off north. Suddenly there was a sheepfold that I did not expect to see. Hmm. Map and compass out and error was sorted and I headed up to the Calf just to make sure. (embarrassing for an orienteer but interesting to find Bob made exactly the same mistake when he came up and was surprised to see a trig point). The trig point was there and I set off again. I knew I had to leave the big path and head north on a ridge but I misjudged the distance in the clag and turned too soon. 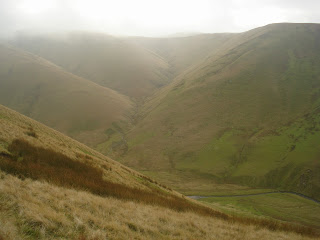 It meant I had a drop to the East Grain and a climb up to the correct ridge. After two mistakes I was expecting Bob to catch me up. About now I realised I was pretty wet, even though it wasn't really raining . It was mild though so no real problem. I was now on a wet but fairly decent quad bike track and more importantly I was back on the gofar route. After Hazelgill Knott this was predominantly downhill and I could not resist just going down into the clear weather. I then found a sheep trod and ran back up to Langdale Knott. 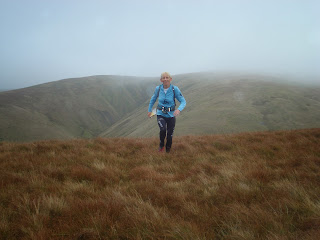 I was just starting to think that a run on the big valley paths might be best given the weather when it started to clear. I crossed Langdale Beck and got up to the trig on Middleton surprisingly fast and the views were improving all the time. My earlier errors made me cautious and I ran with map and compass in hand but safely crossed Simon's Seat and around the valley top to Docker Knott and the unnamed 500m top. Then it was a down and up to Uldale Head.
The path from here to Rispa Pike was probably the worst a boggiest of the day and in fairness Harveys do show peat hags on the map. I found the pond on Archer Hill and headed off to the drier ground of Hare Shaw and Blease Fell.
I recognised bits now from the Tebay fell race. Working back to Uldale Head was hard work but I knew that once there it would be a good path over the top of Black Force and then a contour round to Lingshaw. The views were now great in all directions and there was blue sky.
The wide grassy track was lovely running and when it took  a descent I left it and headed to Brown Moor. This seemed a long detour and I lost some height.This was probably about half way and I stopped for a brief rest and food. The flog back up to Fell Head was a beast and made worse because I followed a trod that led me into deep heather and very steep unstable scree.
The relief when I arrived at the top and could see a good path all the way back to Calders was amazing.  Somewhere around Busk Howe I passed my first person of the day and as I left the Calf I met another fell runner.
I was conscious that time was getting on and the weather was now so clear that I had stowed my map. It meant that leaving Calders I forgot to deviate out to Great Dummocks. It would only have been a return trip of about a flat kilometer but it was annoying to realise too late. The run to Arant Haw was wonderful and very fast. Perhaps I would have time to complete the rest of my route after all. The drop to The Nab was easy but coming back I tried to contour and save a climb. My feet were moaning that every contour seemed to be the same anticlockwise. My left ankle had a rub and the ball of my right foot felt like it might be hot or even a blister. 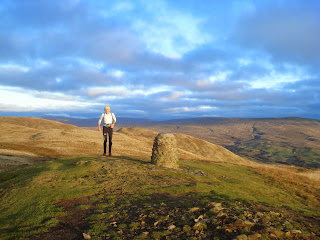 By 3ish I was on Winder and enjoying the last of the afternoon sun. The heat was going out of the day but the tops I had left were relatively low now. As I set off for Crook I saw another runner in the distance but I had turned off the main path before we met. 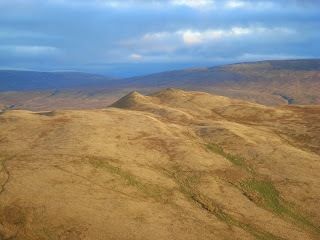 Crook was an interesting little peak with two very pointy summits. Very different to many of the flattish grassy tops of the day. A tiny trod took me up the stream to below Sickers Fell and I stopped for food and water. It seemed quite light still and then I looked behind me, oh dear.
The summit was marked by a small pile of stones but I could not find a path towards Knott at first and then the one I did find was guarded by horses. I was wary because on the OMM the horses at one CP were quite aggressive.
There did not seem to be any paths off Knott, except down to farmland and these had no access points to the fell. I guess at this time of year and in the fading light I could have risked it but I was goo and followed the wall along the edge of the access land. The overprinting on my OMM map made me think there was a wall all the way and a big track next to it. In fact it becomes a fence and a small but OK path hidden from above my a line of thick gorse. I squeezed my way down to it as the light was fading fast. After about a kilometer I got a shock as two mountain bikes shot towards me. They too were running out of light and they had no lights, nor any idea of how far it was to Sedburgh. With just a short section to go I decided I really did need my head torch. Plus if Bob was worried and looked out he might see the light and realise I was on my way. I had run fairly hard for the last few hours, anxious at racing the dark, and got to the van shattered.  What a day out. 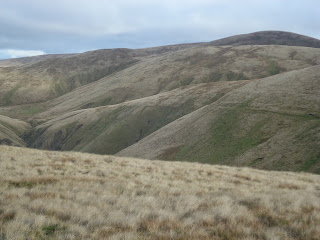 The Howgills have lovely rounded tops and some amazing running but the valleys are deep and steep. The big tracks are great but where there are none it is hard work. I had covered about 31 miles and been out about 8 and a half hours. It has whetted my appetite and I really fancy the whole circuit in the summer.