Originally my plan was the Frostbite 30 as it was closer but then after the Wye One Way I realised that I was in with a chance of a series prize so long as I ran at Brecon. The nice organisers at Might Contain Nuts found me a place and so it was another long drive into the depths of Wales. Bob had a walk on the tops planned and we stayed in the van. It seemed late when we arrived in Talybont but it was only mid evening. I registered and we settled into the cattle market car park before an early night. 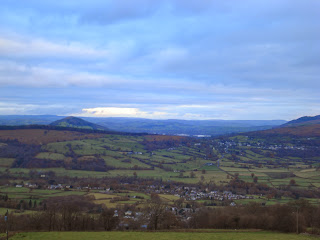 The morning dawned dry and mild. I always know when it has been mild overnight as I get too hot in the van. Sadly the guy next to us must have been cold and his engine running got us up earlier than we had planned. By 7.15 we were congregated in the car park and listening to the last minute instructions. 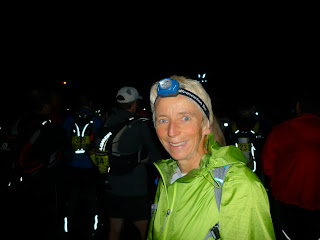 It was still to dark to spot people easily in the crowds as both the ultra and marathon runners were assembled. We marched quietly to the back of the pub and waited on the canal bridge. Setting off up the Taff Trail I knew it was going to be a long hard day. The cold I had suffered all week was still with me although my voice had made a bit of a comeback overnight. 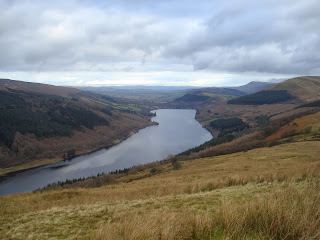 On the first incline I stopped to remove my cag and get a breather. Many passed me but I also overtook lots as we headed down across the fields and onto the canal. I had not done this route before It does not go over the high peaks but has almost as much climb in total. 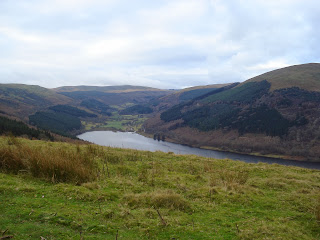 Around CP 2 we got great views into the high tops and the cloud looked to be clearing so I hoped Bob was having a good days walk.I felt I was struggling until CP 3 but tried to keep the group in front in sight. 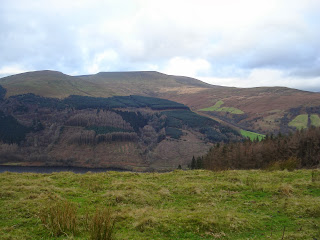 Most of the paths and fell were surprisingly dry although the bog on Warn Wen was still as wet as expected. Somewhere around here I felt I got second wind and when others stopped at CP 3 I ran on through and kept going. 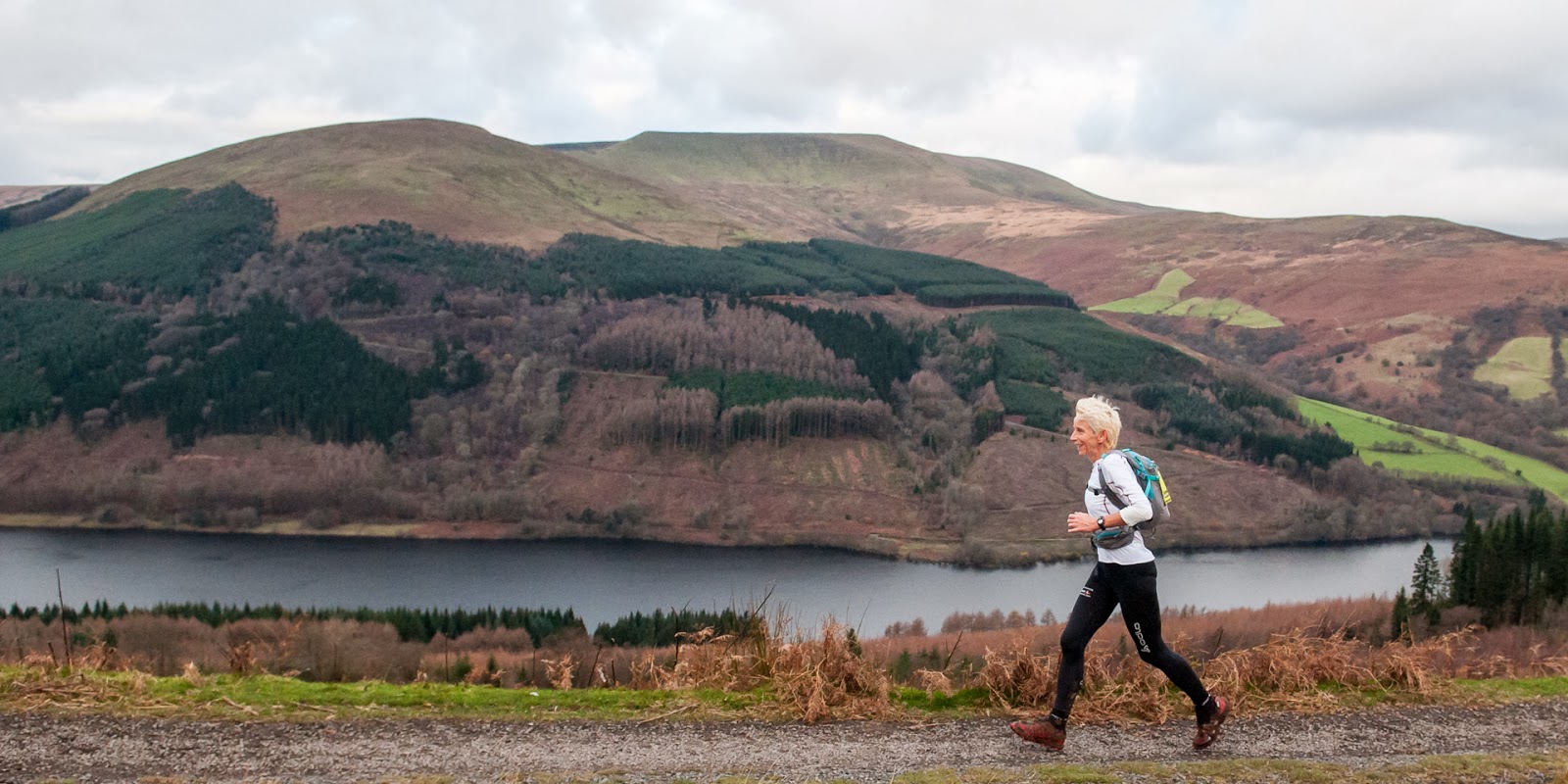 I chased a guy in blue all the way to the A470. I had decided to experiment with some real food after getting very sick of gels on the Wye race. The tuna mayo wraps seemed to do the trick as despite feeling a bit glum at the sight of the gravel forest track stretching off into the distance I caught up with some other runners. The Story Arms seemed to take a long time to appear but the girls on marshall duty were fantastically cheerful and filled my water bottle. The weather was benign compared to late October when the OMM started from the lay by. 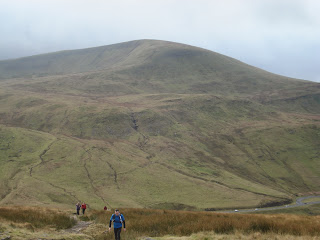 Climbing towards Corn Du we met our first tourists of the day and the summits looked positively crowded. I ate my other wrap and stomped my way to the top gaining another few places. The run down to CP6 took so long that I was worried I had missed a sign, especially as it first goes NW, but every time I got worried I spotted another MCN sign. For me this descent was the highlight of the route. CP6 was a landmark with only 10 miles or so to go. 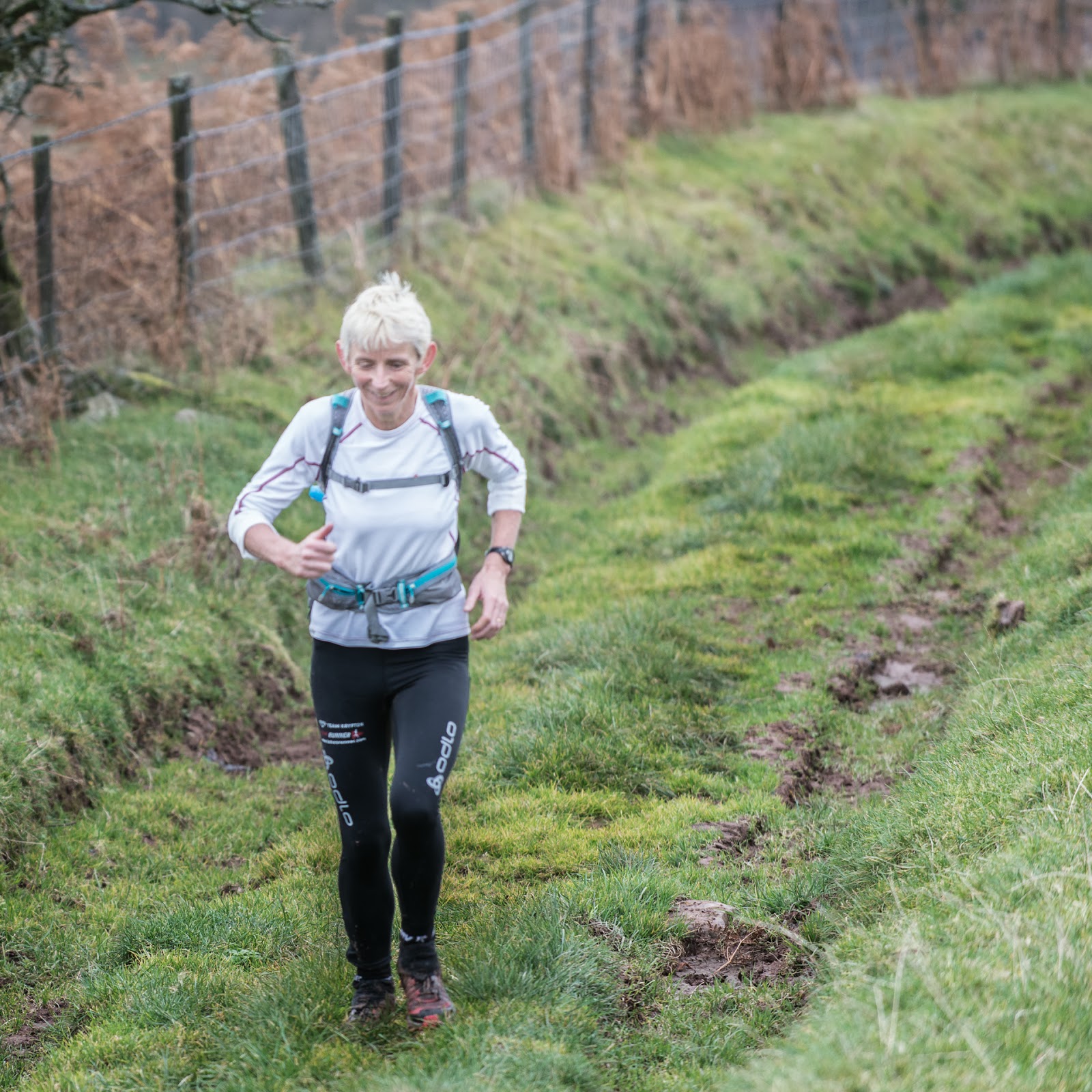 It was marshalled by the guy who had been on duty outside registration on Friday night and he asked how my voice was going. Here I got cocky and ran on ahead round lanes, tracks and bridleways. After a couple of miles we joined the summer route and I was sort of pleased, but sort of sad, that we were not climbing back up Cribyn.
I say sort of sad because I much prefer the muddy paths than tarmac lanes or rocky valley paths,  A sign had been lost here and I made a serious nav error. I had in my head the little note on the map about adding some climb for UTMB points and so ignored my instincts to turn left to the river. The signage had been so good and I could see another runner up ahead.  After more than a kilometre I knew it was wrong. Fortunately a quick check on the map showed I was at the end of the in-bye fields. There was nothing for it but a quick descent through the bracken, across the stream and head back north on a little path. I arrived at the correct point just as a big group climbed up from the river. All that wasted effort. Still I now had company to help me push the pace a bit. Somehow I had convinced myself that after CP7 it was done and dusted and pretty much downhill. How wrong I was. We climbed and descended and climbed again crossing every possible valley as we headed east. Even when Penceli was in sight we went up rather than down onto the canal. Over the last fields and then the tow path my new found friends slowly pulled away. I passed Bob on the tow path and knew it was only a km or so to the finish. I had hoped to break 8 hours but not today! The marshalls were clanging the bell and cheering us in and at last there was the finish. Despite being warm all day when I was running I soon chilled off so I shot off to the van to wash and change. I met up with Bob and we strolled down the Old Station for the prize giving. I had missed Emma finishing but saw a number of the guys I had run with. Despite my error I was also pleased to have stayed ahead of the next lady. The winners did awesome times with the first 3 all under 7 hours and the best in 6 hours 18. I was pleased to manage first vet lady on the day and also in the series. I think I was third lady on the day if you ignore age categories. 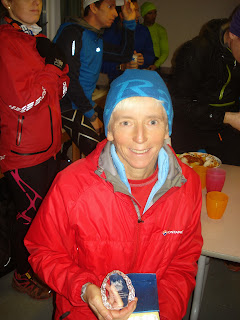 Losing 20 minutes up the valley and struggling with a cold meant I took 8 hours 30. I later found out in the pub that a garmin showed nearly 43 miles and that was without my little detour. Perhaps JonS is not the only RO who underestimates the distance ;)
With the prize giving over we wandered up to the pub and settled in for a relaxing evening. We ate early and as we started our second beer it began to fill up with more runners. 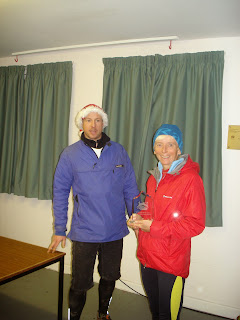 It was interesting to chat with a guy from Iceland who was telling us how cheap things are there now due to their poor exchange rate. We also chatted to some men who had completed their first off road marathon and a couple of others for whom it was their longest race so far and the start of preparation for the MDS. It was good to stroll back to the van and fall into bed, leaving the drive home for Sunday. There were at this stage still people finishing.. that is a long time on your feet and going slowly in the dark. 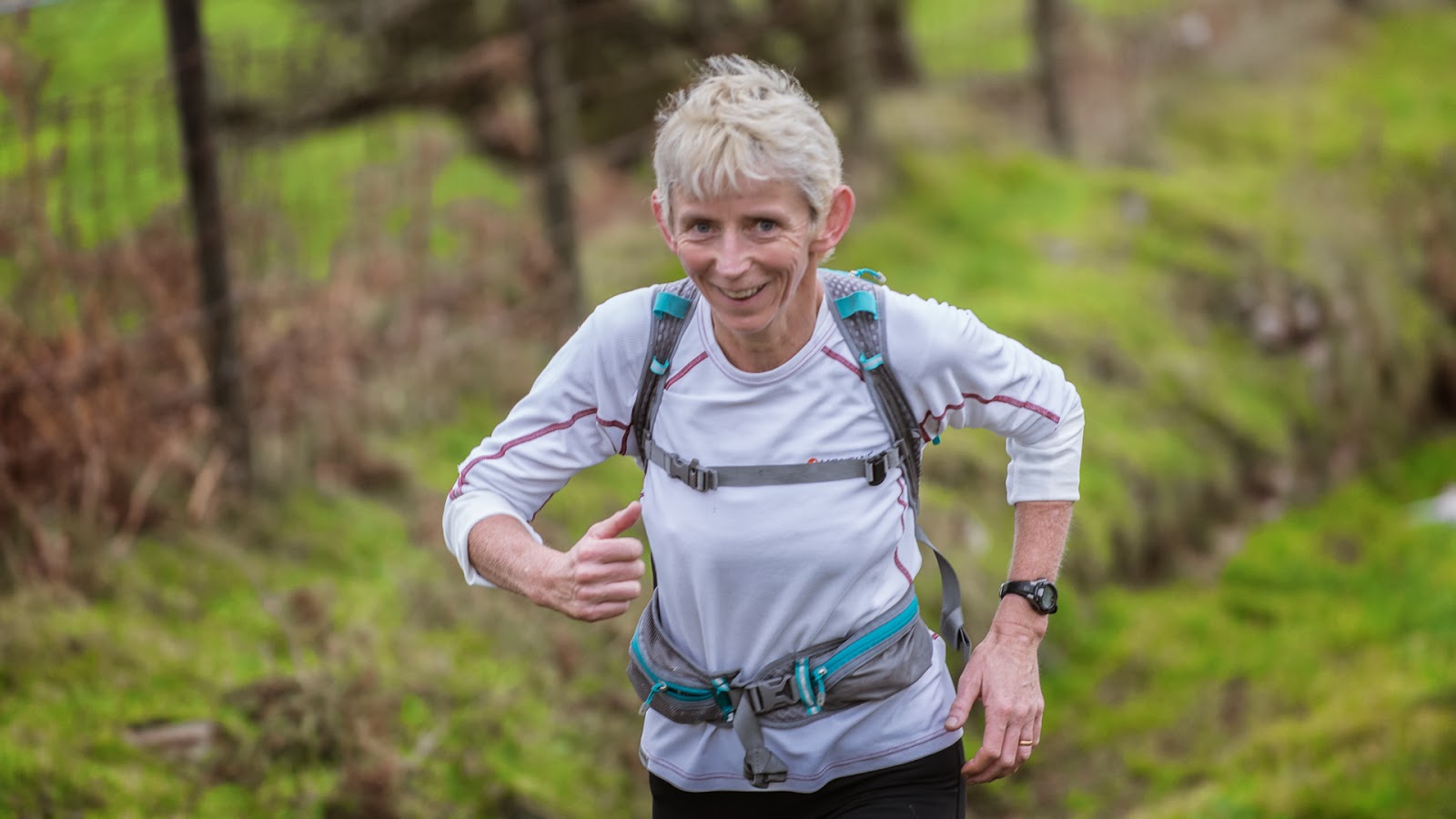