The last race in the Runfurther series- Warrington Way (40 miles)

This was a new race for our series and only the second year it had been run. I did not need it to count in the series but for some reason it became important to do it. The race was full but had a waiting list. Before the end of October I was in the race but not before finding out that not only was there another Karen Nash (I knew that, she lives near Halifax and does the RRR) but that we share a date of birth which really cocks up entry systems. Anyway I was now IN which was just as well as I was taking the mint cake and display boards plus then taking away all the flags and banners at the end. It meant a very early start and I never sleep well the night before anyway. I had not been to Lymm but knew parking was tricky and there was very limited space at the race HQ. No chance of using the van and sleeping there over night. The forecast was awful but as the week went on it did improve slowly. The drive down the M6 was in heavy rain and it was still raining as I found the Scout Hall and dropped off the gear and met Kieran the RO. I quickly found parking on a nearby street and sat eating my breakfast. By the time I returned Andy and Dick had also arrived so there were three of us to put up flags and banners. Having registered early there was plenty of time to chat as other runners arrived. By the time Kieran was making his RO briefing I had spotted Daryl, Debbie, Chris D, Glen and Huw, Adam, Gary, Michelle and Mike plus more. Runfurther were well represented and I wandered if we should be having the prize giving after the race.
As we drifted outside the dawn was breaking and the rain had almost stopped. It was mild. I had not had time to recee this race but we had been promised tape at all important decision points plus we had been provided with waterproof maps and race descriptions. What could possibly go wrong?
At 7.30 sharp we were off and streaming down the gentle drop into the village centre and then out onto the Trans Pennine Bridleway. It wasn't long before we knew what damage the weeks rain had done; there were huge puddles even on this wide gravel track. After a few km were turned onto tracks across the fields but these were firmer than I had anticipated and although wet and even muddy it was a hard surface to run on. We were on an anticlockwise loop and heading north. After crossing the M62 (the first of many motorways) we then turned west on more hard tracks. The puddles were enormous and I had long ago given up any hope of keeping my feet dry. Aldi dry socks would keep them warm enough. At the end of Croft village a lady relay runner caught me as I hesitated at a junction to check the map and route description. I was at this point first lady. We crossed the M6 and the M62 again before emerging into a pub car park and CP1. I wasn't loving the route but she encouraged me and we chatted which helped. At the CP there only seemed to be sweets stuff so I grabbed two jaffa cakes and left. I tried to stick with a group of guys as we continued west to Burton wood services but ended up on my own again. I crossed the A49 and the busy roads near B and Q OK. Then at Burton wood a minibus of Scousers desperate for a pee greeted me here. They were cheeky about my lack of speed so I was cheeky about the size of their appendages. Soon shut them up. The magic tape was a bit lacking so I had the descriptions out now. Even then I went off route at a farm and one lady shot by. Normally this would spur me on but today it just made me even more negative.
The route improved in terms of views for a bit but most was still on hard track or lane as we turned south across the M62 again and into CP2. 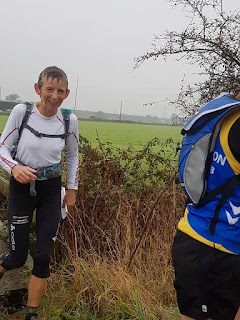 I had caught the other lady but really did not have my racing head on and as I said to Daryl 'I just can't be arsed'. I took more food here but was getting bored or jaffa cakes and malt loaf. I should have packed something savoury from home. I suspect that as it was cool and wet I was also not drinking enough.
Field paths and roads now led me to Fiddlers Ferry where we crossed the railway and the canal to join the Trans Pennine Trail.
This section is very runnable but I was struggling today. As I crossed the Mersey and hesitated to check the way yet again two guys caught me up. They were in good spirits and we laughed. I stuck with them through the nature reserve but then pulled ahead. I should have just waited. I turned onto the Bridgewater canal OK and tried to keep 'Tri-man' in my sights. A random piece of tape and uncertainty about Hough bridge saw me leave the can and add a km to the route. It also allowed another lady to catch up and pass me. Instinct told me I was going wrong and I went back to the canal to find more runners. I was now a bit despondent but was with some good guys and this helped me get to CP3. 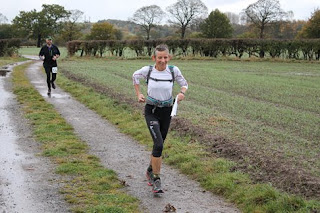 Here I had a very welcome cup of tea before crossing the M56. Somewhere here after the stables and the paddling lake we went through I caught Daryl again. He was now more negative than me! I had a shock when I turned the final map over and found the description was in a much smaller font. Did that mean it was further? No, this last leg was actually the shortest. It must just be tricky. Fortunately I was now navigating carefully and the tape seemed more reliable. The slurry pit farm was rank and the fields were wet but I preferred this to road and hard track. It was also more scenic.
We crossed the M56 again and the noise of traffic seemed to be constant but the fields, small lanes and woods were pleasant. At some point we crossed the M6 not far from poplar services and after a short stretch on the A50 came the best part of the whole route. Fields, woods, small paths, mud, a man eating pot hole in a puddle where I stumbled wet up to my hips, ups and downs. Now I was enjoying it. The woods merged into  more woods and Lymm Dam and the lakes . It was a shame it would soon be over, I could have run another 10 miles on this section. An iron arch way signposted Dingle and the village. We were nearly home. Past the Cross, up Pepper Street and we were done.  It had taken me 6 hours 49 for just the 40 miles. Round Rotherham, which was the inspiration for this race, at 50 miles and had more hills but had only taken my 8 hours 34. The mud and my black mood had taken it's toll.
It was good to sit in the hall and to chill, chat and refuel. The post race chili and cous cous was amazing and I managed endless cups of tea. 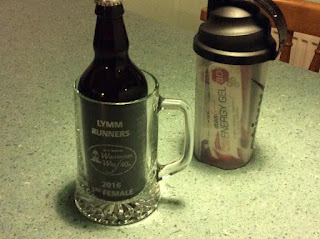 I was 3rd lady and less than 4 minutes behind the other two- once my mood lifted I had started gaining time again in the last 10 miles. 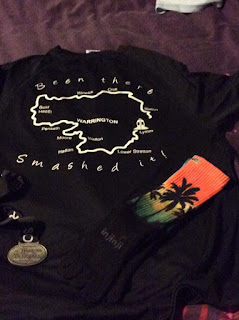 A great RO and team, the weather turned out better than we dared to hope but the route is too fast, flat and tarmac for me.
Posted by Ultras and a lttle bit more at 13:46