A short run and a longer run

November turned out a little busier than I first thought. After the OMM we had a'free' weekend but them helped with an orienteering event locally. I did skive off for quite a long run on the nearby fells as I was not really needed and it was far too sunny to sit in the forest. I had no desire to run from home on tarmac or local fields but the Bowland Fells were perfect and I didn't get anywhere near as muddy as I had anticipated. 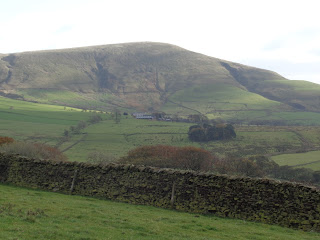 After a very speedy run on the lanes to Brock Bottoms I then wandered upstream through the woods for a while. 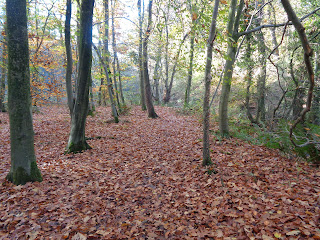 I found what was for me a new shooting track, a new memorial to airman killed in the wars 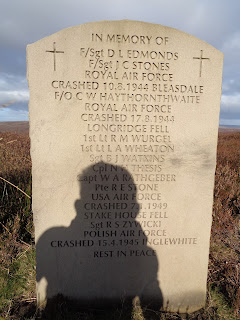 and then after a bit of bog bashing and heather hurdling I was on my favourite ridge from Fairsnape to Parlic. 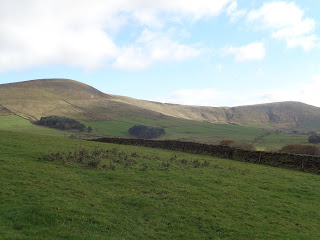 Fields and lanes led me back to Beacon Fell just in time to help collect in controls.
The forecast for the Sunday was less good but I was determined to get out. We drove to Austwick and had various loose plans to run from there. We might even see each other at some point on the way. It was chilly but not really cold. It was also a chance to try out the new running pack I had won a couple of months ago at a race. the pack is too big for many ultras and not quite big enough for a MM but for a self supported long ultra or a wintry day when I was carrying plenty of spare layers it worked well. Austwick was quiet and the parking is free. It's a pretty little village with a great cuckoo festival and short fell race. 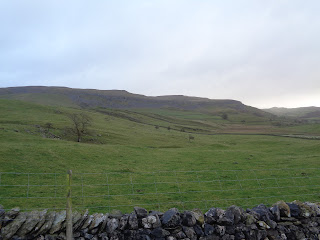 I headed out up Crummock Dale and then up Moughton Scars. Running on nice grassy paths and on undulating ground meant I made good time so I headed back to Sulber Nick and Thieves Moss before heading north again en route to the col just north of Ingleborough Summit. 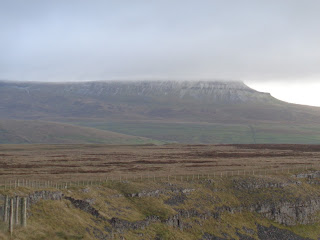 Pen y Gent looked moody in a cap of dark cloud but I was not going that way today. 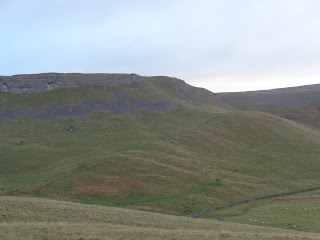 As I gained height the cloud thickened and then it snowed. Not much but enough to add a sprinkling on me and the ground. 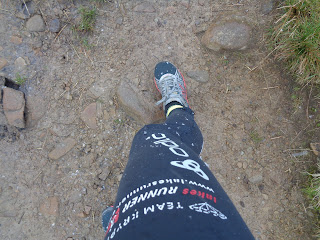 I had plenty of time so went exploring north east over Simon Fell and then across to Park Fell. Hindsight suggests I should have stuck by the wall but I followed a nice wet grass track and was too lazy to get my compass out and see that I was heading east. My punishment was over 30 minutes of stumbling through tussocks and hip high wet grass. From Park fell trig point it looked obvious but there was a maze of paths as I headed down to the Ribbleshead railway station. The extra warmth down here meant my wet tights were now steaming and drying out nicely. Just as well we had not planned to park here as it was almost full. I joined the big bridleway under the viaduct and headed north towards Dent. 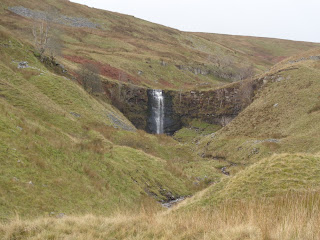 Just before the watershed I cut left to pick up the path to Whernside. I met quite a few people on this stretch; presumably they were doing a Whernside loop for the pub and parking at the viaduct. Again as I climbed I lost the views and it snowed again. The odd section of the path was icy but nothing serious or any reason to slow down. From the summit it was an easy reverse of the Fellsman to run down to the road and the Hill Inn. It felt tropical here by comparison and I even contemplated taking layers off. 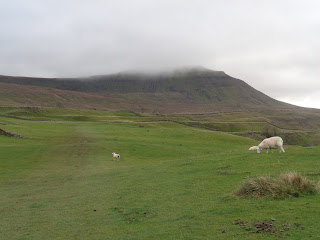 In the end I slowed to eat and was fine but it was nice running on short grass and without the pressure of a race. I am not a fan of the path from Ingleborough to the Hill Inn. The greasy rock makes me over cautious and I usually lose at least a dozen places here on the Fellsman. Today though I was going up and I much preferred this. Just before the col it got very much colder and the grass had beautiful mini waterfalls and icicles. 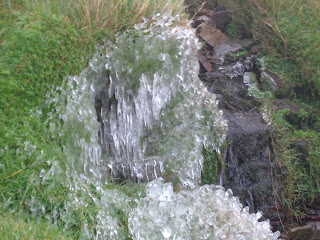 The short section on the plateau was very low viz and cold! Not a place to hang about. I used the shelter wall to find my compass and took a bearing to find the path to Little Ingleborough. Again I was cautious over some of the rocks and flag-stones. 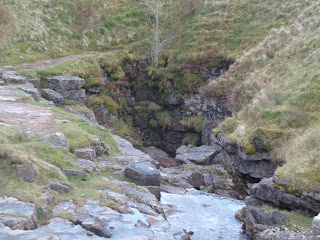 On this section I met Bob and stopped for a quick chat before heading off to Gaping Gill. I then got engrossed in running and forgot to climb at Clapham Bottoms. Suddenly I found myself at Trow Gill. 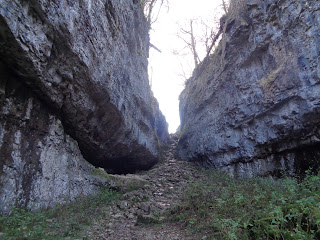 Ah well, no worries. An easy run on a good path took me down past Ingleborough Cave and then through the woods to Clapham. 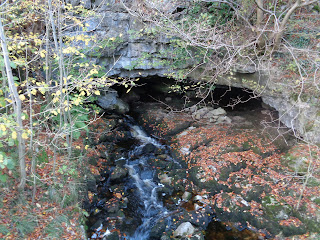 This section was very busy. I knew Bob would drop to Thwaite lane but I preferred a softer path and so opted for the slightly lower field paths. A rather frisky herd of cows were guarding the final exit gate but I made it through without incident and then less than a km through the village and I was back at the van. As I sat warm and dry with a cup of hot chocolate the rain began. Bob appeared later but claimed he was not that wet. It rained harder as we drove home so we felt grateful to have had the best of the day.