It was a full race this year with no entry on the day; a first? This was partly due to the race being used as the British Trial for IAU World Trail Championships. There were many new faces and later names in the results that some of us did not recognise.
As usual for us the day started early. Having slept in the van on site Bob and I were up at 6am putting up flags and banners before moving inside and putting up display boards and giving  Brett the Romneys Mint Cake to hand out at registration. It was dry and mild with many dressed in shorts and vests, so things were looking good. I found friends to chat too- vCarmine who I have not seen for ages and Sarah and Andy who will be doing H200 with me.
The bumper entry meant we were a little late starting and the crush of runners meant many were not herded back downhill to the start line at the Fleece.  Starting down there possibly added a couple of minutes to my time but it was pretty insignificant in the overall time. I had chatted to some of the ‘elite’ before the start and that would be the last I saw of them, except in the distance as we climbed to Withins ruin.
I was determined not to race too hard and to practice a sensible pace for the long race I have in May. It didn’t work. Despite my efforts the first couple of hours showed 6mph+ pace. Oops.  It felt fine at the time but I paid for it later. I had also opted for grip not cushioning in anticipation of mud. Again, it did not work out. I would have been better with more cushioning.
The first miles to Bronte Bridge passed very quickly and I was surprised to queue less than usual at the first gate. By Withins we were quite spread out and although I lost places being a softie on the flagstone descent I felt fine. 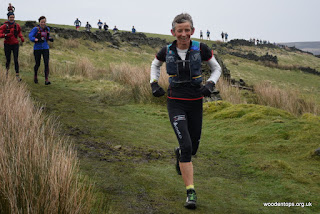 By Widdop I knew I was pushing too hard and backed off a bit- after running to look good for the sportsunday cameras that is. 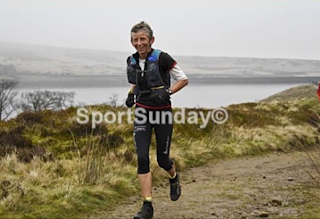 I chatted to Helen briefly but soon decided I should not try to keep up.Before Long Causeway my glute was troubling me and I was cursing my early pace and the hard sprinting of Wednesday night. My pace dropped here and I let those I was running with move ahead. I found Josie hobbling and walked with her for a bit as she debated pulling out at the next CP on Long Causeway.

The CP at Stoney lane was a welcome sight and I grabbed a hot dog and a piece of pork pie. It must have helped because I ran on a bit refreshed to Todmorden (or was it just that it was mainly down hill?). A shock awaited me at Mankinholes as there were no donuts! I took a cheese and onion pie instead.  The climb up to Stoodley Pike was as tough as always. The dry weather meant there was quite a crowd at the top ready to cheer runners on. I had eaten plenty and initially ran well but by the time I reached the woods I was suffering and let the mixed couple pass me. My glute was now very sore and now my foot was complaining too.

Ironically the climb to Heptonstall didn’t seem too bad as the uphill helped my foot and not running much relaxed my glute.  My joy didn’t last though and the climb up Crimsworth Dean was a real low point. I ran much less than usual of this section and the pain in my foot was intense. I hobbled on the best I could but in a very negative frame of mind and feeling stupid to have even entered the H200. I had a chat with Rachel here and she too slowly pulled ahead even at fast walk pace. At this stage a pw was a cert and even 6 hours looked a big ask.

The last CP and Lane Head means only 4 miles to go. Apologies to those around me at this point who thought they were running with a nutter. A severe talking to myself: Man Up, get on with it, don’t be such a wimp etc etc and I set off up the lane. I caught Rachel and some others and it boosted me a little. 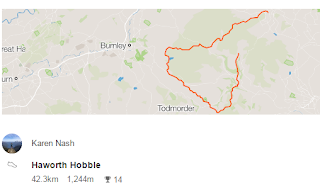 My garmin battery had died but near the Top o’ Stair it occurred to me that we had not started at 8am so perhaps if I really tried I could still finish in under 6 hours.  So it was run, jog, walk intervals all the way up the lane and over Penistone Hill.  Luckily I know the way and was able to help a runner just in front of me who kept slowing and was uncertain where to go. Not pretty and a PW by 5 mins but I finished in 5hrs 53. 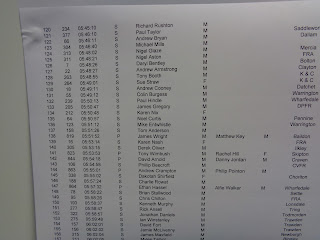 I wasn’t happy with it but hey ho... and then I found that despite all this I was first FV50 so perhaps it wasn’t too bad. After several cups of tea, pasta and stew and a donut or two I was feeling better.
The field was superb this year. I think 6 men broke the record and 8 finished in under 4 hours.
Tom Payn won in 3 : 54:18 and then Gareth Hughes, Matt Roberts and Kyle Greig all in 3:55. First Runfurther runners were  Ken Sutor 4:12 and Keving Hoult 4:16. First woman was Julie Briscoe in 4:31 and then Sally Fawcett 4:38 and Katie Kaars Sijpesteijn 4:39. I cannot believe that only a few years ago I beat Katie at a Hardmoors race. I am not sure if the female record was broken but think it was. A great start to the RF season and a few new members joined up too.