Having completed my good deed for the week and helped the PE department with a moderator and orienteering we decided to head east for a couple of days. The plan was to complete the recees of the Calderdale Hike. This had become even more important as Bob had switched to the long course. It seemed a shame to waste Tuesday afternoon so we parked near Summit and compared the official route and our preferred descent from the White House down to the valley bottom. 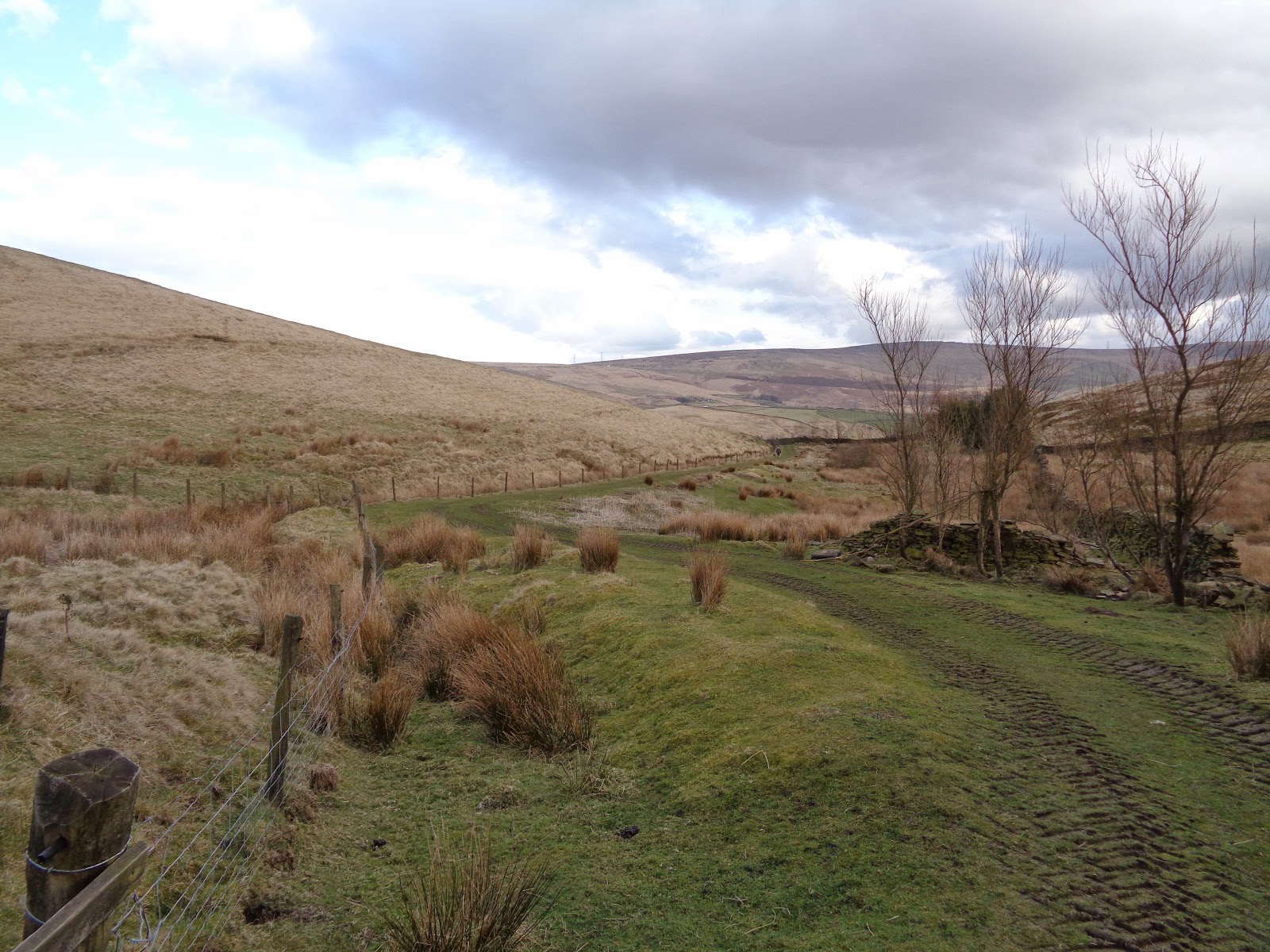 It didn't take long so we were able to explore the official route up onto the moor towards the new wind turbines too. 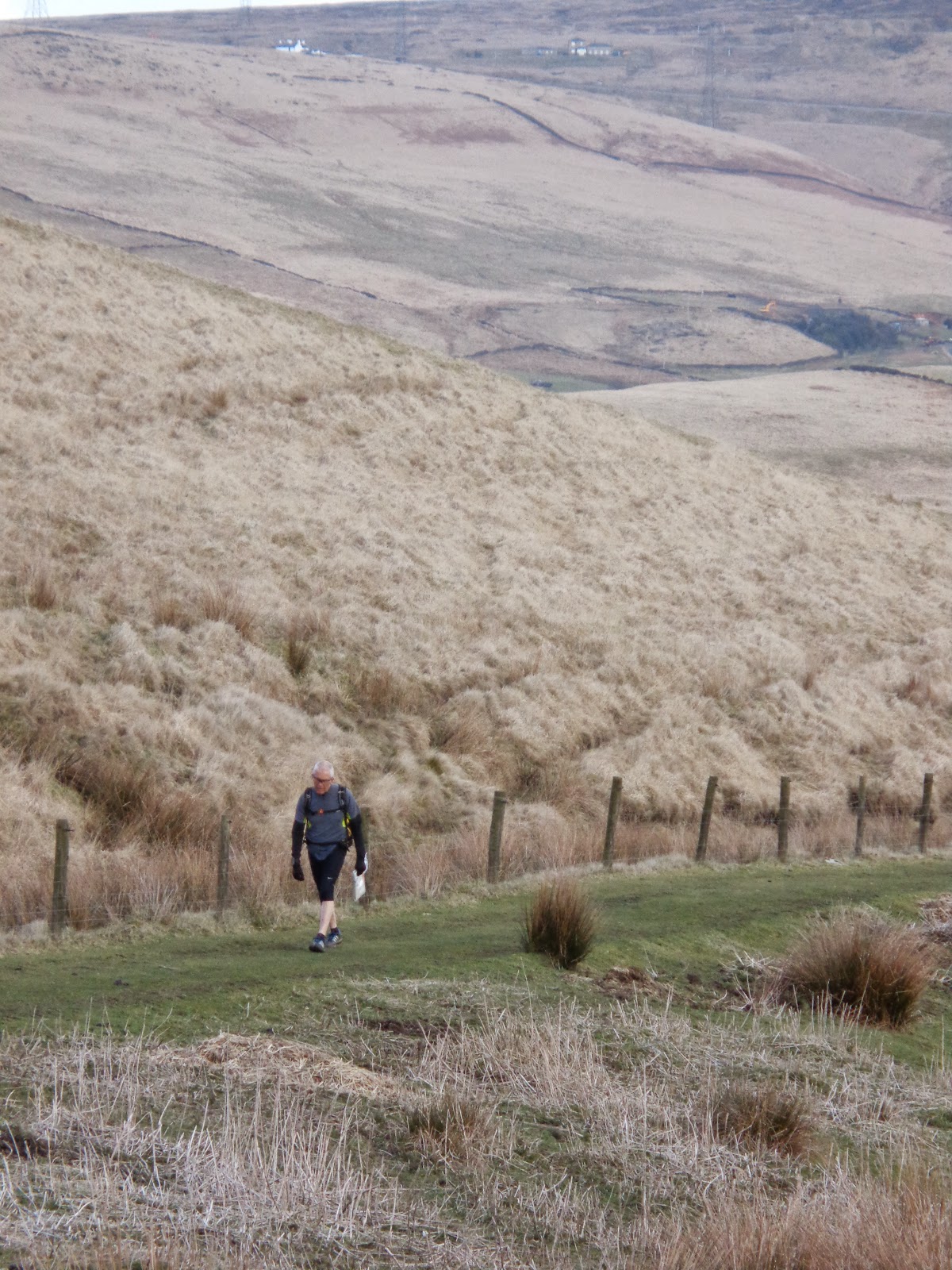 This route is slightly longer than the way I went last time but is certainly drier underfoot and in bad vis would probably be easier to pick the line over the top of the moor. The wind turbine construction is progressing and the foundations and plinths are in. All the extra traffic on their mud road seems to have compacted it and made it better for running on. It was a chilly night in the van with fantastic views of the stars and the distant sky lines. 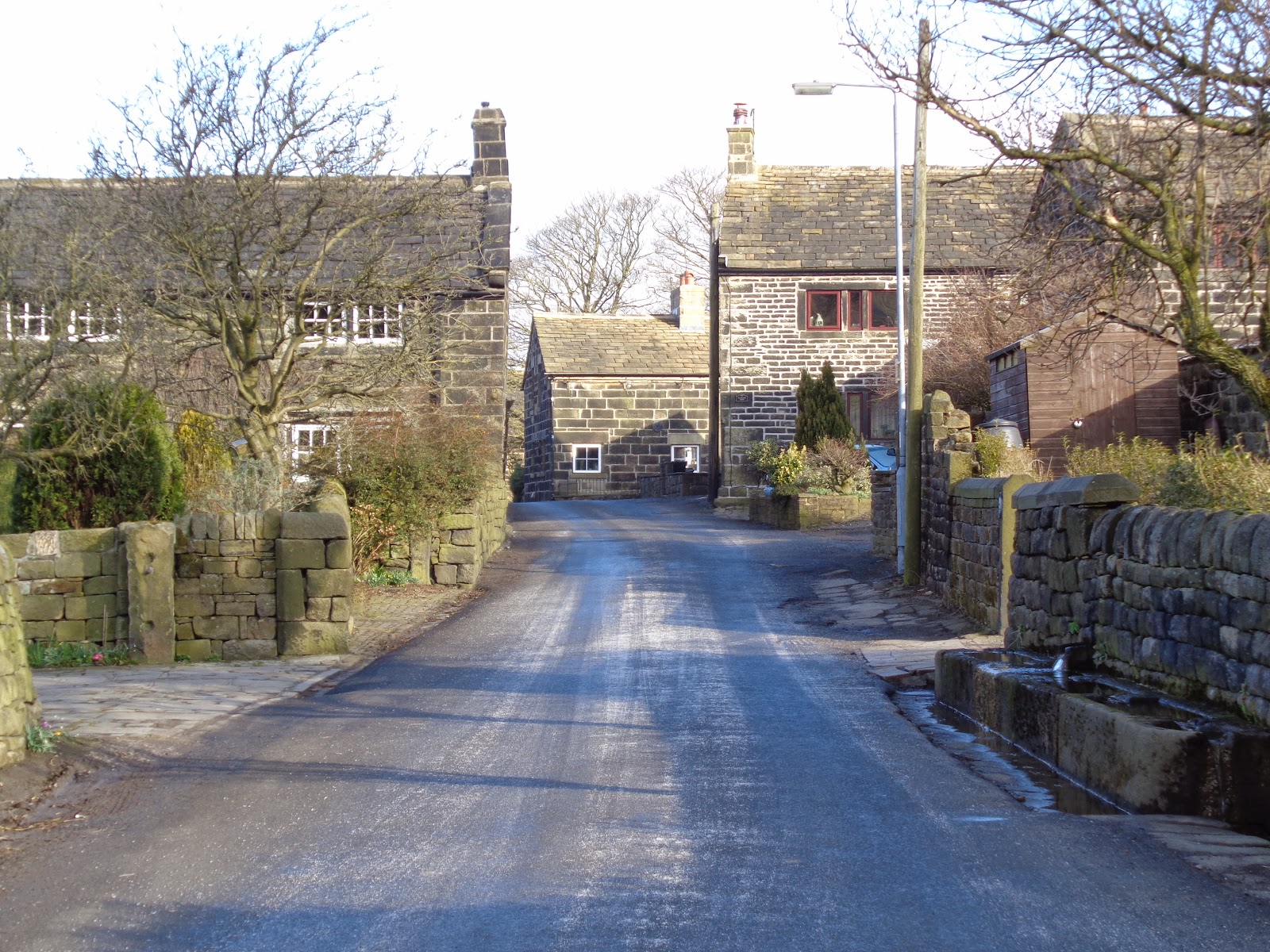 Thankfully Wednesday dawned bright and sunny as we were not planning on speed. After a fairly leisurely breakfast we left Mankinholes and set off along London Road grateful that we did not have to climb Stoodley Pike this time. This section would be easy even to a newcomer to the area and we were soon at Erringden Grange. 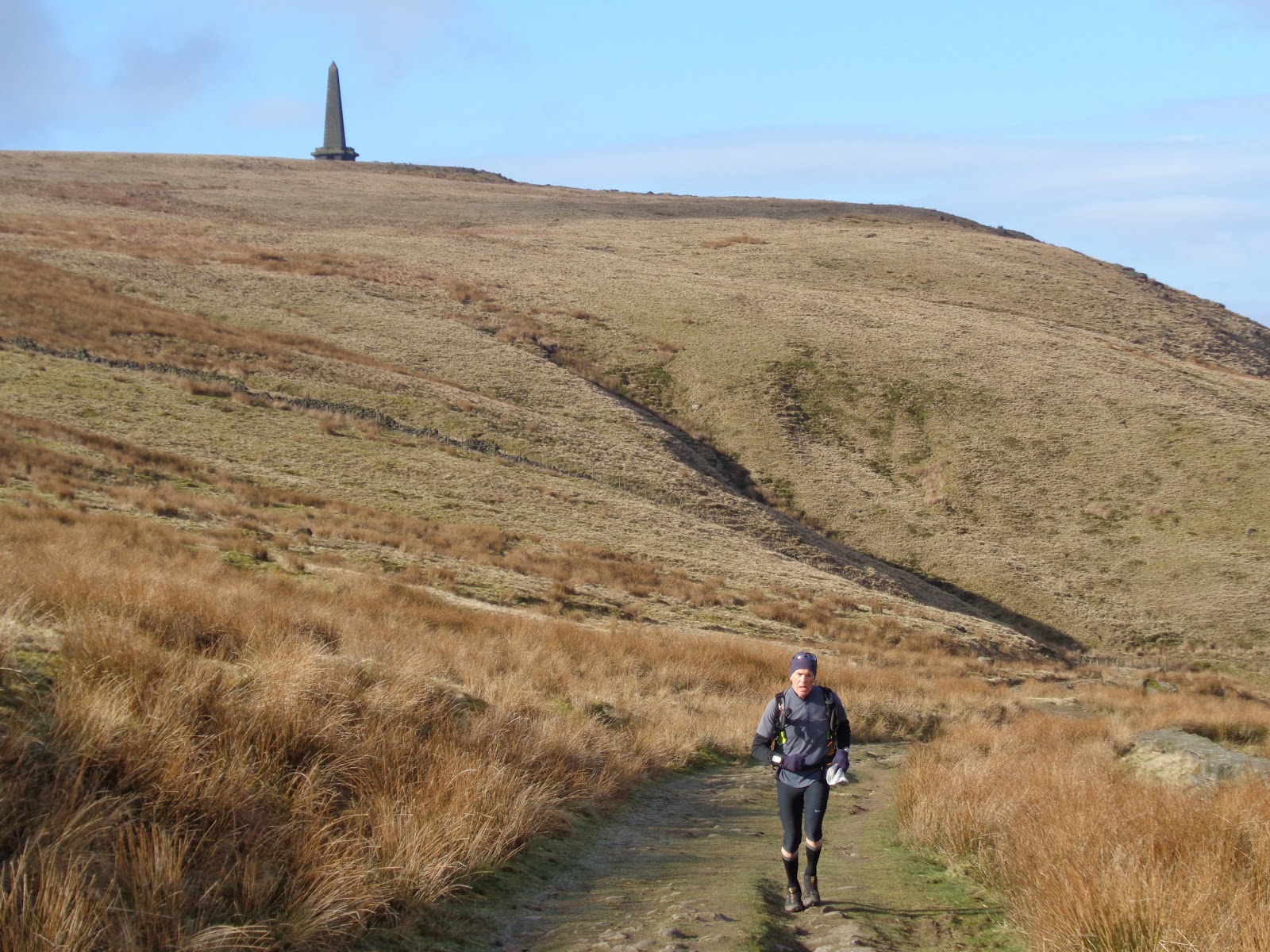 The next section was familiar to me, albeit backwards but to Bob it was confusing. We spotted the tiny trod through the bracken and picked our way through twists and turns onto Hoo Hole Lane. By now it was getting warm and the section from Dauber bridge was up steeply to Nab End. From here though on race day we will know it is all downhill, with the church in view the whole time and almost finished. 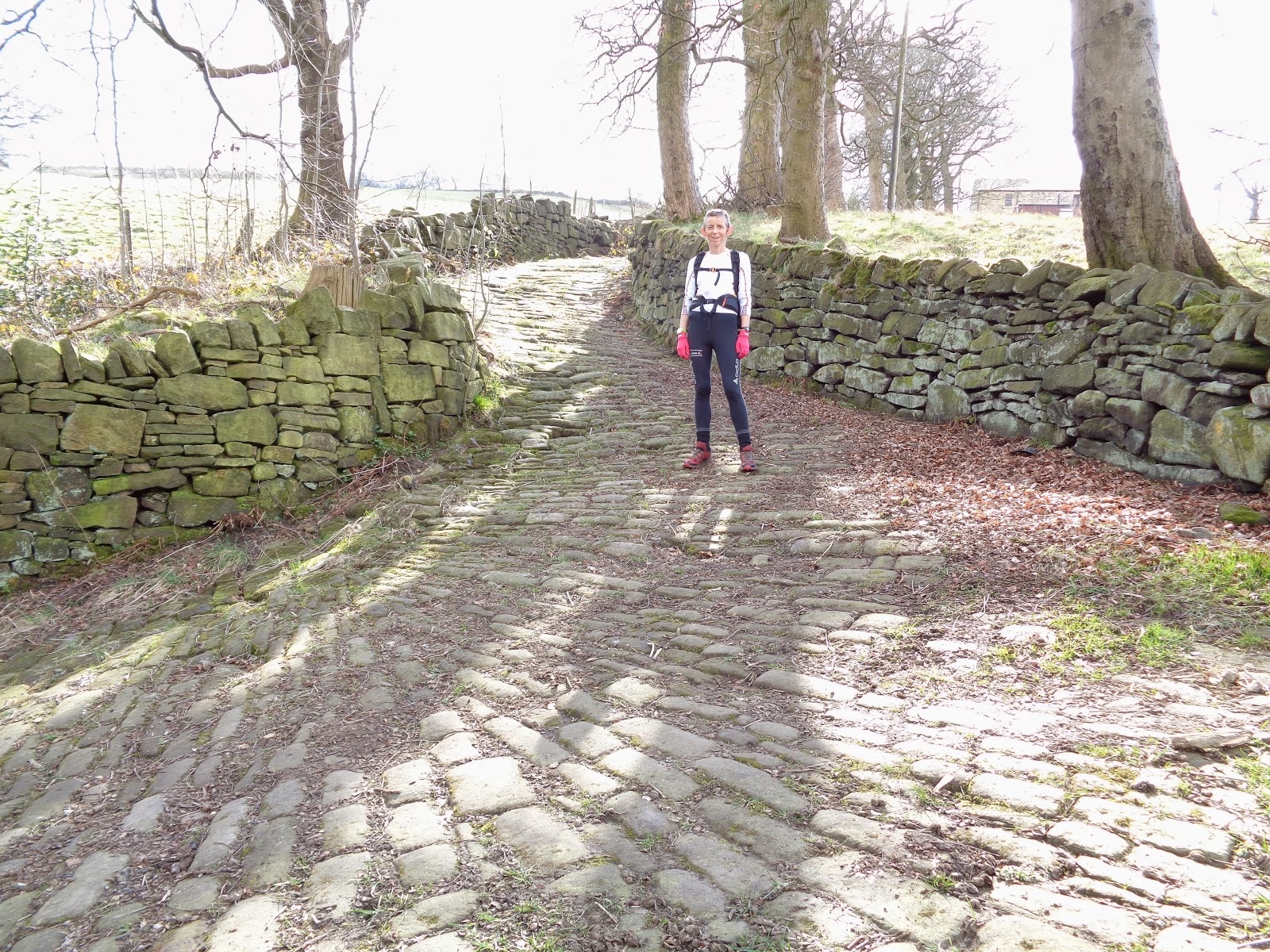 After a quick pit stop for food at the cricket club we set off on the race proper and were pleased with the line all the way to Longley. The wooded section that follows will be fun if it rains but it is only 800m or so before a big wide lane.From Fiddle Lane there were several options. Bob soon decided he was not keen on climbing up the lane so we tried the road and old trail track combination. It was OK. Bob was tired by now and regretting a Park Run followed by a run on the fells. At least it was sunny and fairly warm. 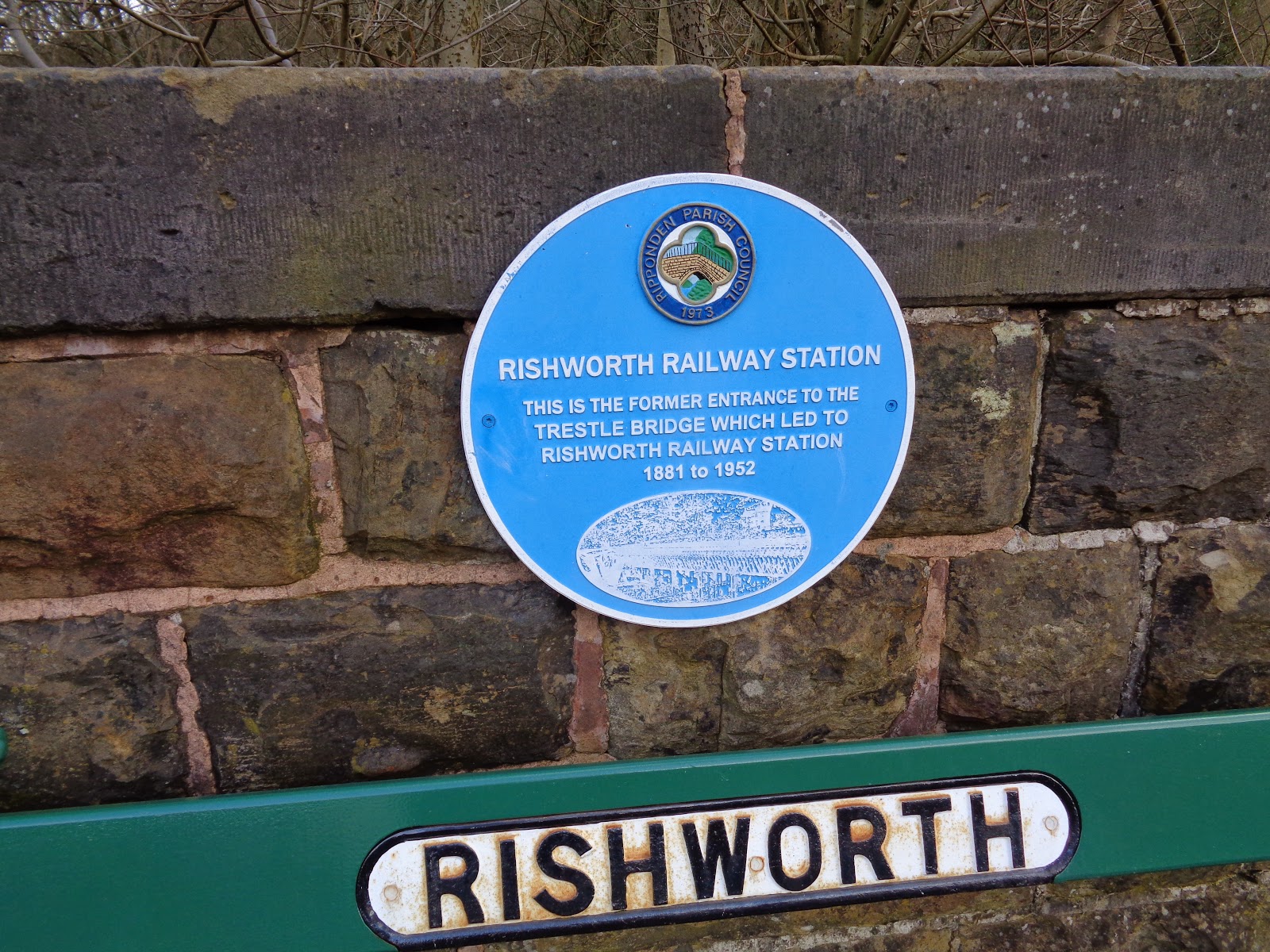 It was easy to Ryeburn reservoir and we admired the houses. Then it was up and up some more, through woods, over fields and past an impressive old manor house to the lane. 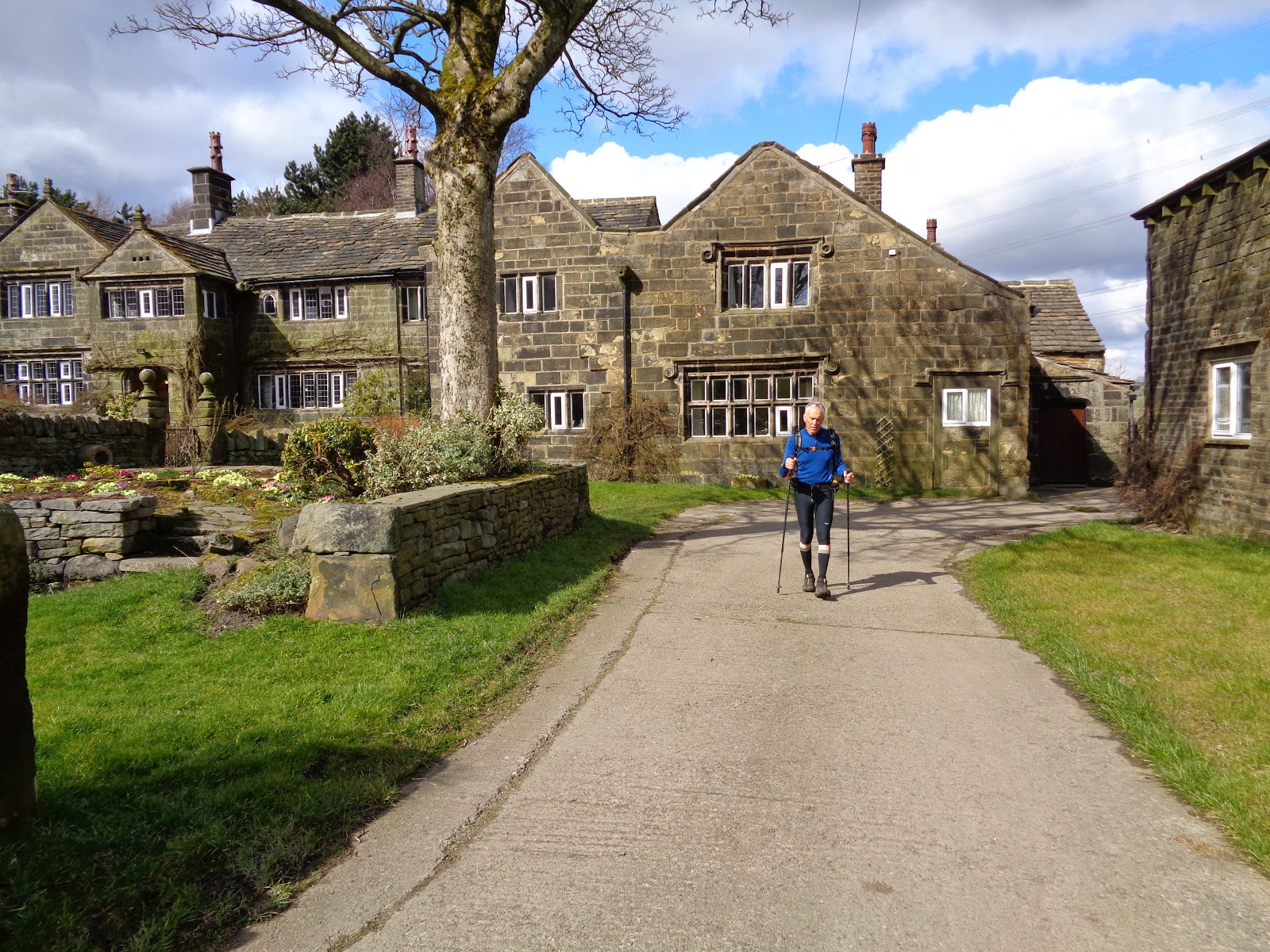 The climb wasn't over as we passed Pike Law and moved onto Blackwood Edge. I experimented here a dropped over tussocky ground to the drainage channel. 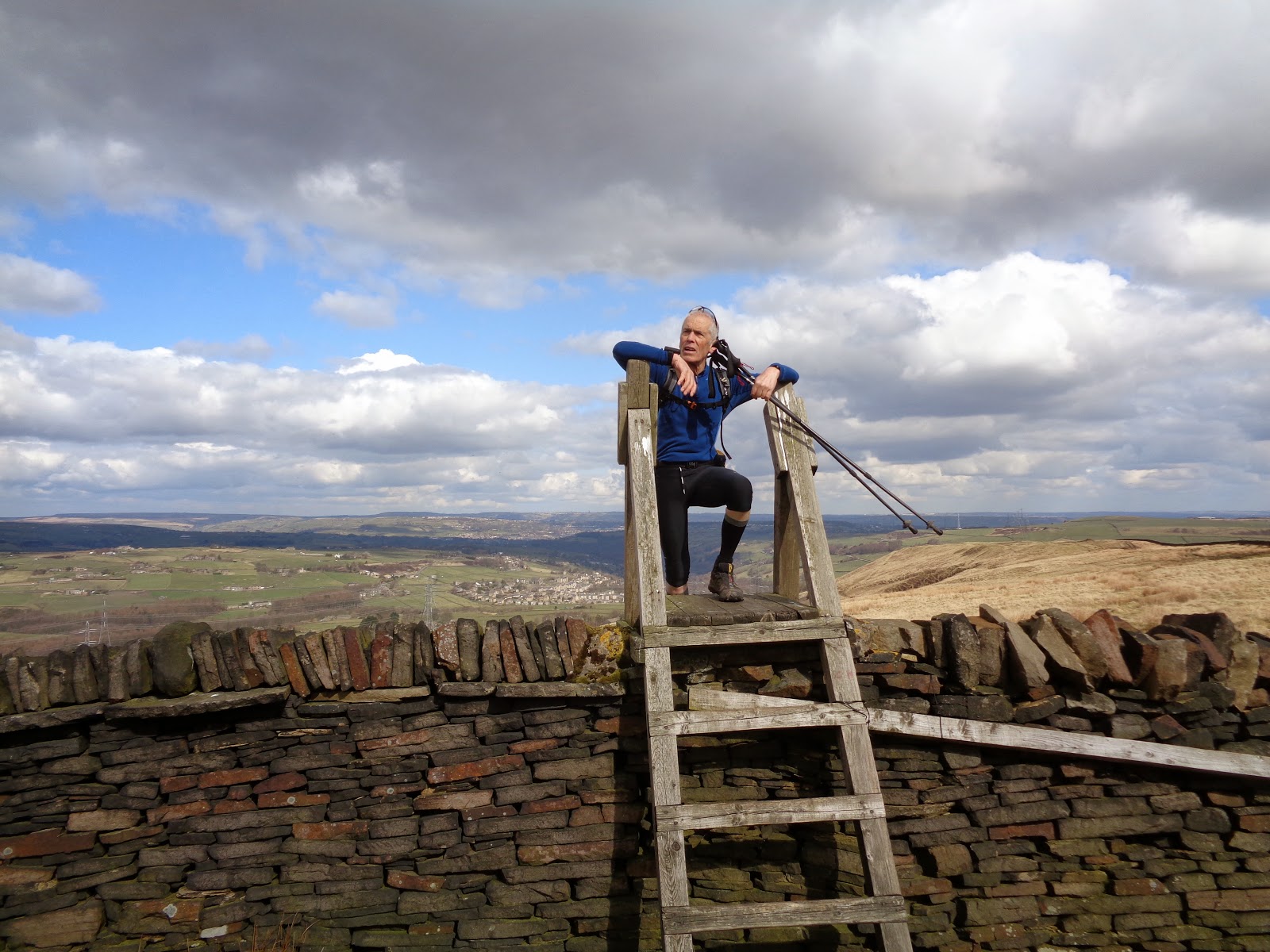 It saves a little climb and was very easy flat running along the drain. I kept running on and waiting but around here my garmin died. I didn't fancy the road verge out to Windy Hill although if it is very wet under foot I may do that on race day. The M62 was busy as ever so we headed straight off towards Blackstone Edge. 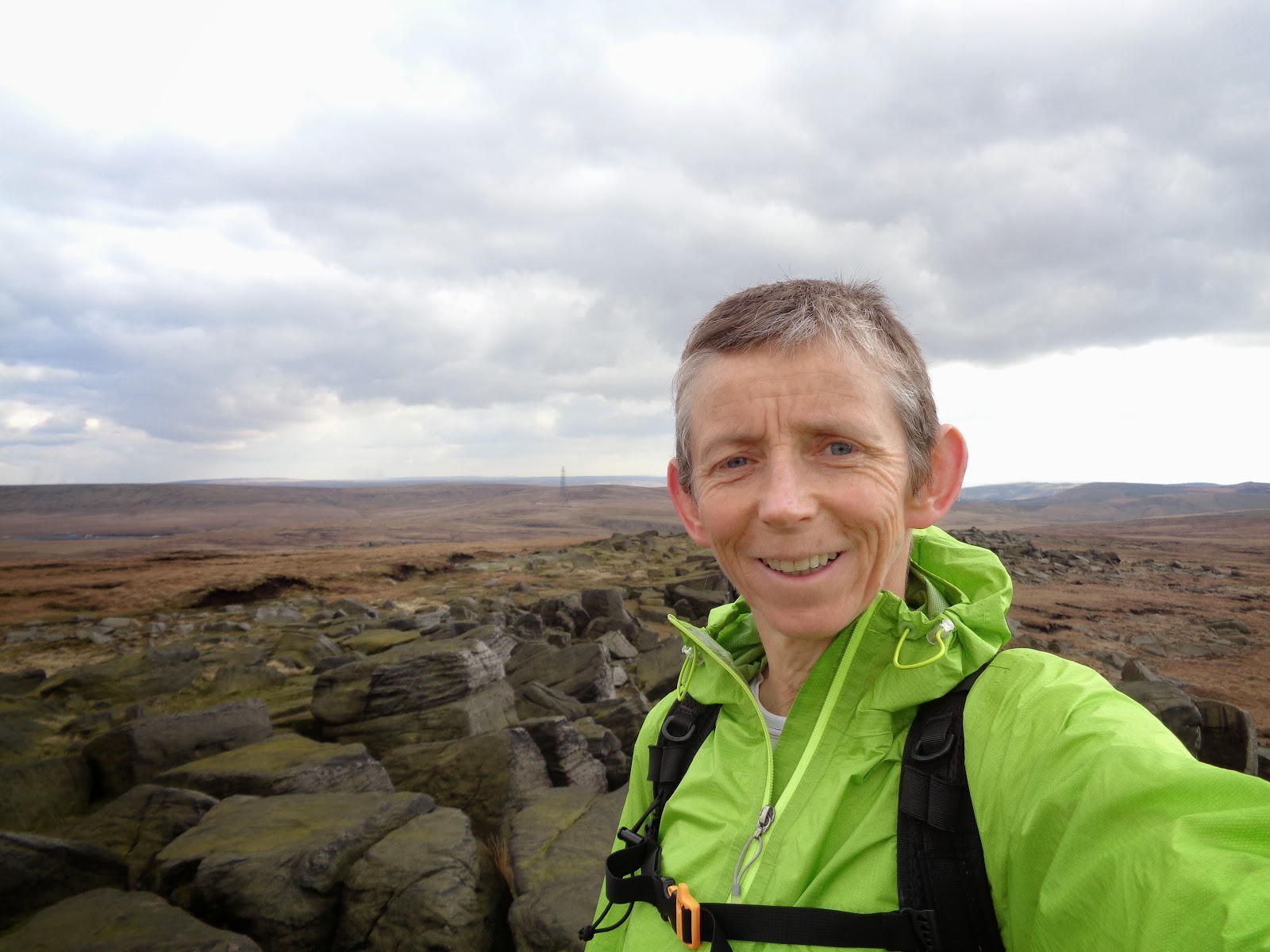 Only once we were on the tops and admiring the view and studying the boulder problems did another route choice come to mind here. I may have to return to test it out. The trods after the Aiggin Stone are not clear but I would be happy to just run downhill to the road at this point. 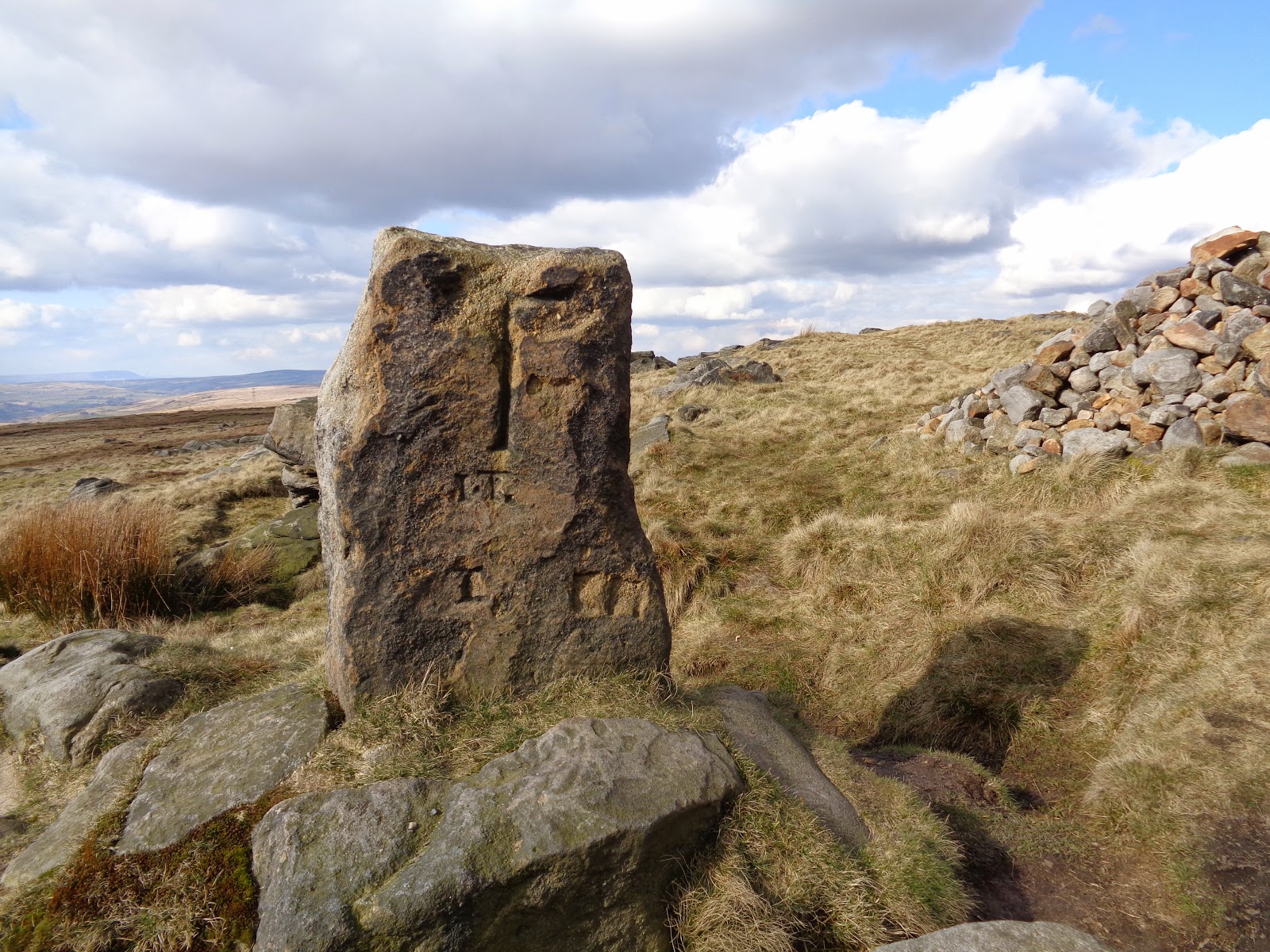 Today we were cutting off one the short route to get back to the van. Bob was happy at his own speed but not at mine as we followed the Pennine Way north. I ploughed on ahead and had time to inspect the poem carved into the rock and the climbs in the mini quarries near the reservoirs. 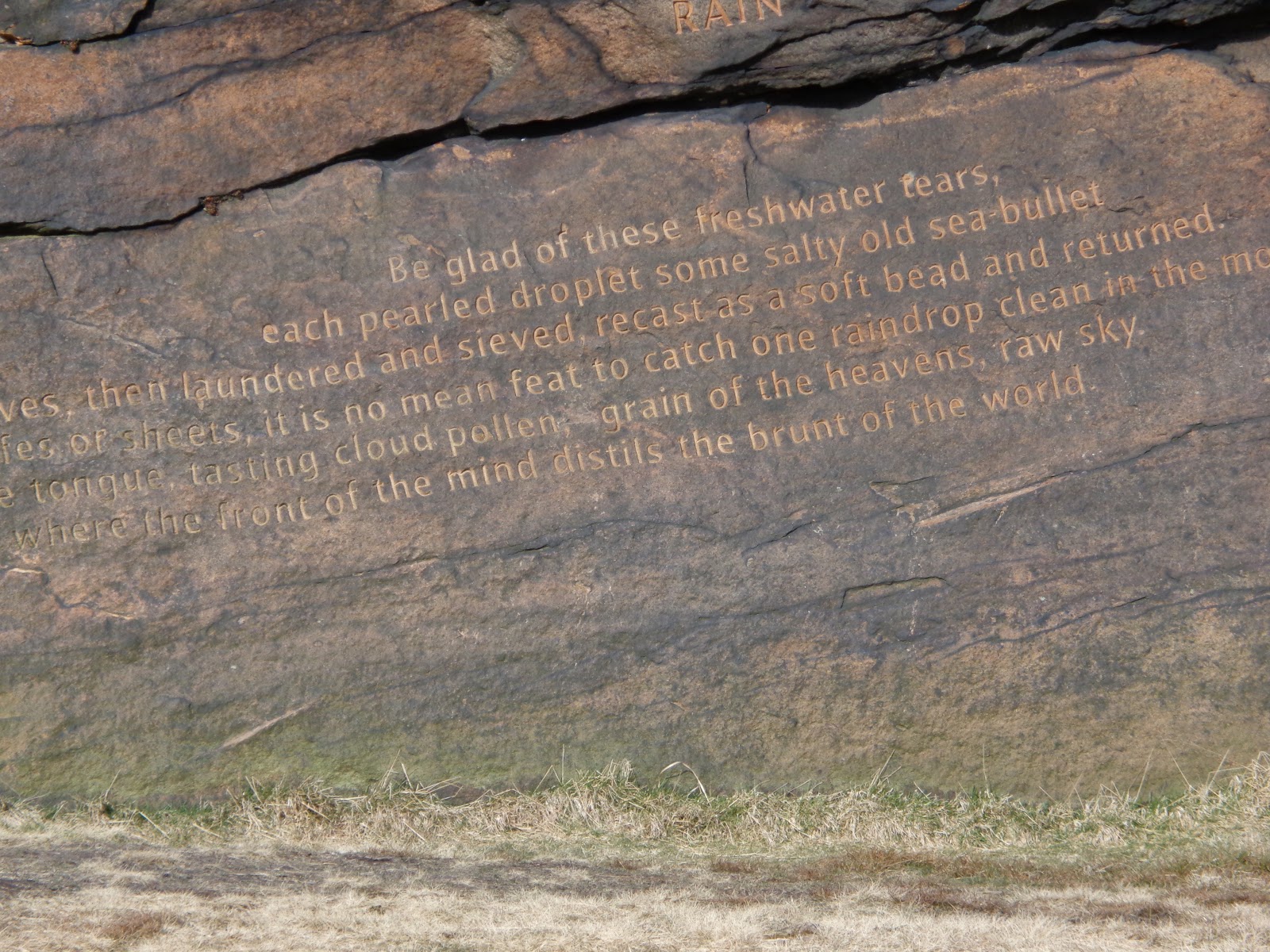 Once Stoodley Pike was in view again we walked together across the moor and down to the van. What a fantastic day. 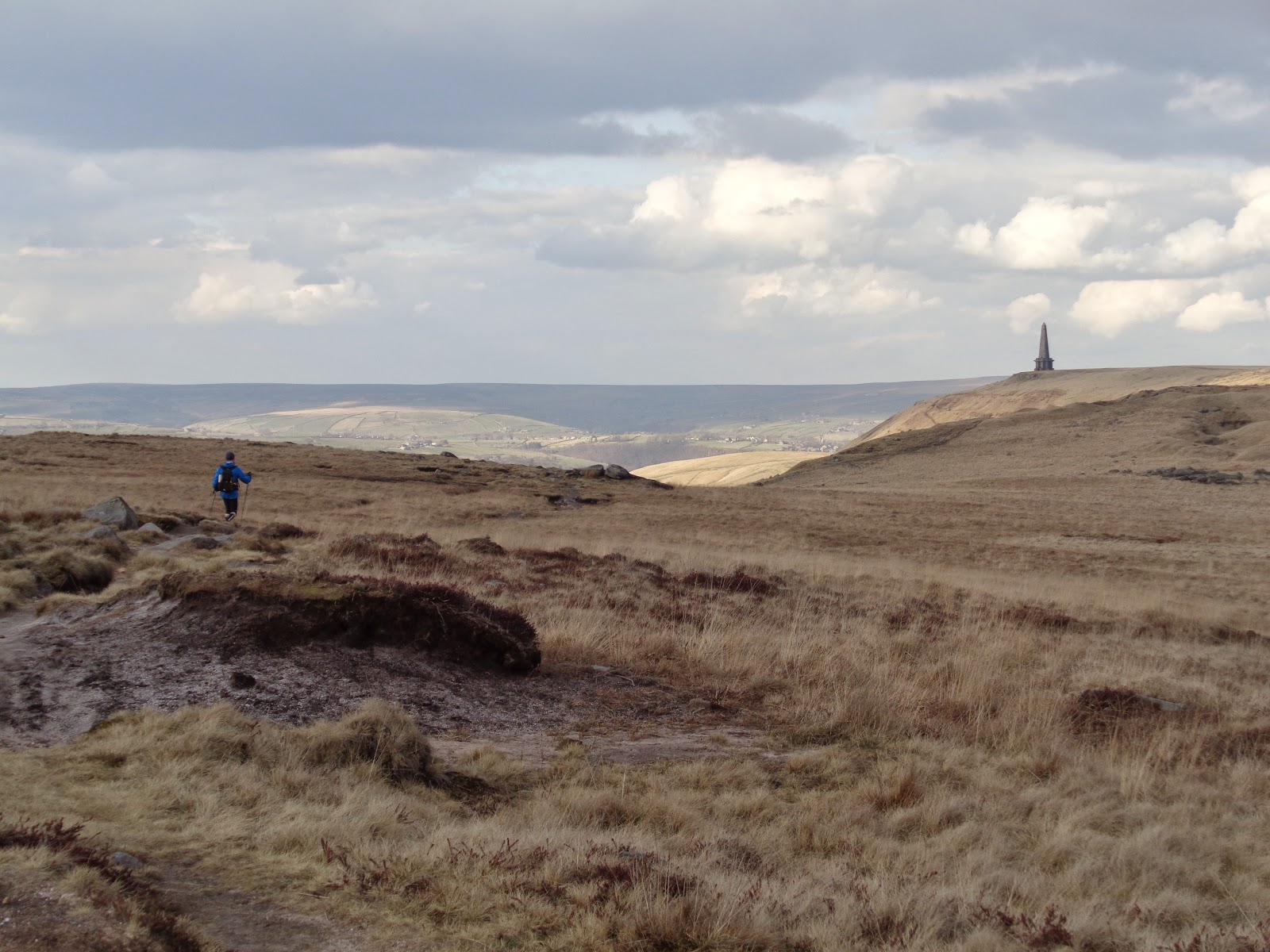 Getting chilly now at the end of the afternoon but dry and sunny throughout. Ironically it was warmer overnight but we awoke to snow on the ground and strong winds. Time for coffee in bed as the day decided what the weather would be. It didn't rain so I had no excuse not to do the next bit. Bob dropped me in Summit and then moved the van to Slate Pit hill. I am obviously the kiss of bad weather on those particular fells. It started OK but by the time I was on Fox Stones Hill it was drizzling and blowing a gale. I tried an alternative route and am not convinced I prefer it. As I neared Long Causeway (not the Burnley one) the wind was blowing me to a standstill. After Rough Hill I met some desperate sheep. They mobbed me and pushed into me. I can only assume they were very hungry. I spent some time trying out a variety of lines after the stepping stones and the only conclusion I reached is that there is now easy way to the big track at Limers Gate. At least I have several options clear in my mind. The van was where I expected but Bob was still out so I set off to explore the next section. As I turned east I suddenly had a tail wind for the first time that day. I could have run to Tod in minutes. Instead though I cut off into the woods and the muddy path by the mountain bike tracks. I am not sure this will be the fastest line of descent for me. As I emerged at the bottom I met Bob and we explored an alternative near the old chimney. He then went back for the van and I explored another possibility from Height Top. I did not have long to wait down in Cornholme and it seemed tropical down there by comparison.
Posted by Ultras and a lttle bit more at 13:10