10 days with running and or exercise in the last fortnight. Cannot be bad. I have run in Cuerden Valley, done hill reps on the Asda 3 hills plus the muddy one, been climbing twice and done two lots of long slow runs planning a street O event and done a faior bit of core and stretching.
More importantly I ran the Bleasdale Circle fell race for the first time in many years. True I was slower than 8 years ago but I guess that is to be expected. I shared a lift with 3 other Preston Harriers and met even more once we arrived. 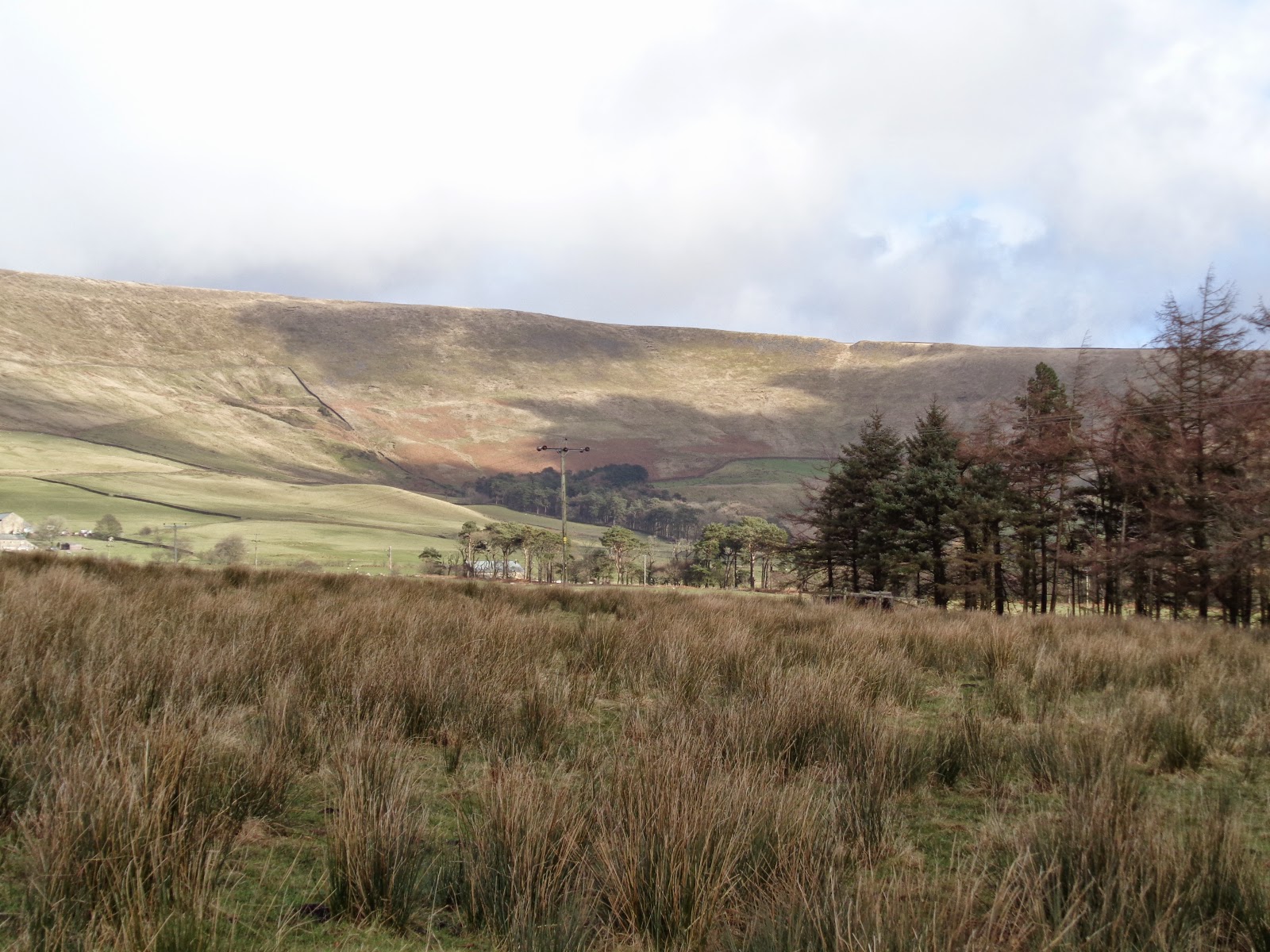 It was cold but sunny in the village as we parked.  I did a short warm up and established that the local fields were boggy- no surprise there. Just as we were herded from the primary school yard out onto the lane there was an almighty hailstorm. Fortunately it was shortlived but it had me worried; would I be warm enough? Cag on or off? No time to ponder, we were off! 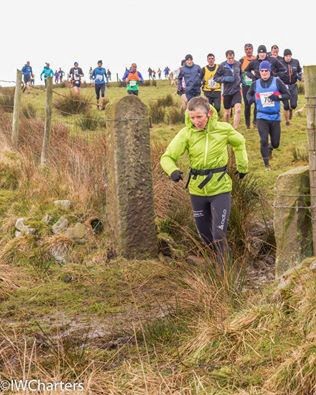 The start was fairly quick across the muddy fields  but when the fields end the climb begins. It is a tough pull up to Fiensdale and Paddy's Pole. I lost places on the gentle slope but soon made it up on the steep bit. I could see Pete and Mick ahead and was determined to reel them in. Mick and I blasted along the ridge towards Parlic and I knew we would catch Pete. I love that swooping ridge and never tire of the views over the Fylde. 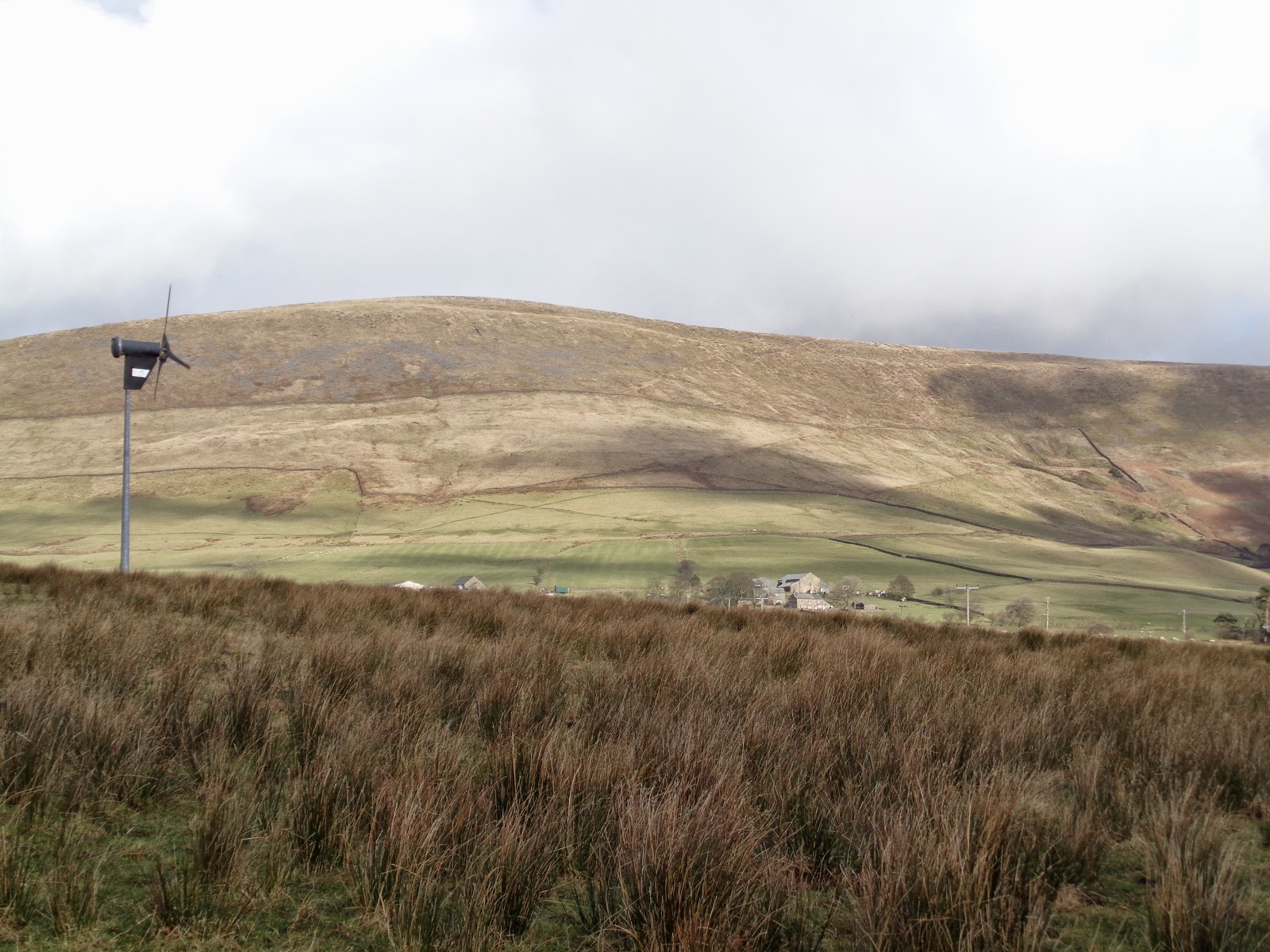 By the top of Parlic I realised with a little effort I could overtake an aquaintance and win my age class. I was less timid on the descent and that was all it took. I should have pushed a little harder on the last fields but by then I was knackered and the mud sapped the last of my strength. Mick and two younger ladies finished just ahead of me. The race only cost me £4 and this included lots of fantastic homemade soup. I also had tea and cake to help club funds. Waiting for the prize giving gave me a chance to catch up with lots of friends.
Andy who I had traveled with was 3rd Man, so I shouldn't laugh at his hand warmers and fleecy headband. I got a very generous voucher as LV50 and we all sang Happy Birthday to Yianis who was 70.  Oh, and the race started at 12 noon so I got a lie in first. 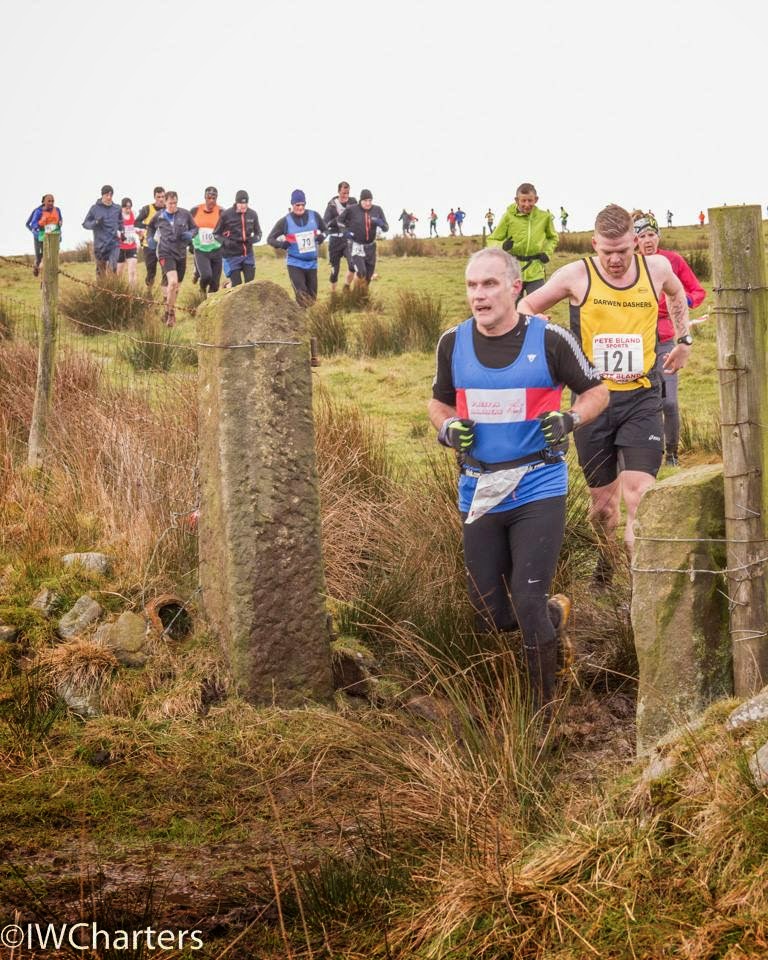 My warm down was a brisk walk home from Pete's house. Thanks for driving Dave (we never caught him now his tri training has given him new speed and strength)
Longridge street O was the first rainy street run for some time but it was warm and steady drizzle and I loved it. I know the town well after all the hours spent there while chris was at gymnastics and I knew where the hills were which helps. I was one of the early starters and we missed the mist. I had a blast of a run which was fine until later when my right glute started objecting strongly. Still; lots of points, good beer, good cheap food, gossip from Portugal O and only a short drive home.
I decided sore glute or not I would go and recee some of the new Calderdale Hike route.
The forecast was good- cold but dry. I parked up the hill from Hebden and checked with the men resurfacing the road that my car would not be in their way. Once I had climbed to Errington Grange I was on route and hoping the first bits would be fairly straight forward even if backwards to normal. It was boggy on the old lane but I descended to Cragg Vale without problem and climbed upto Nab End on what seemed like a good line even if it was not really on a path nearer the top. I passed the race start and set off into new territory. The direct route down a steep path and steps seems best unless it snows or is icy. I negotiated the mills in the valley bottom and climbed through a small beech wood and onto a steep lane with slippery setts. 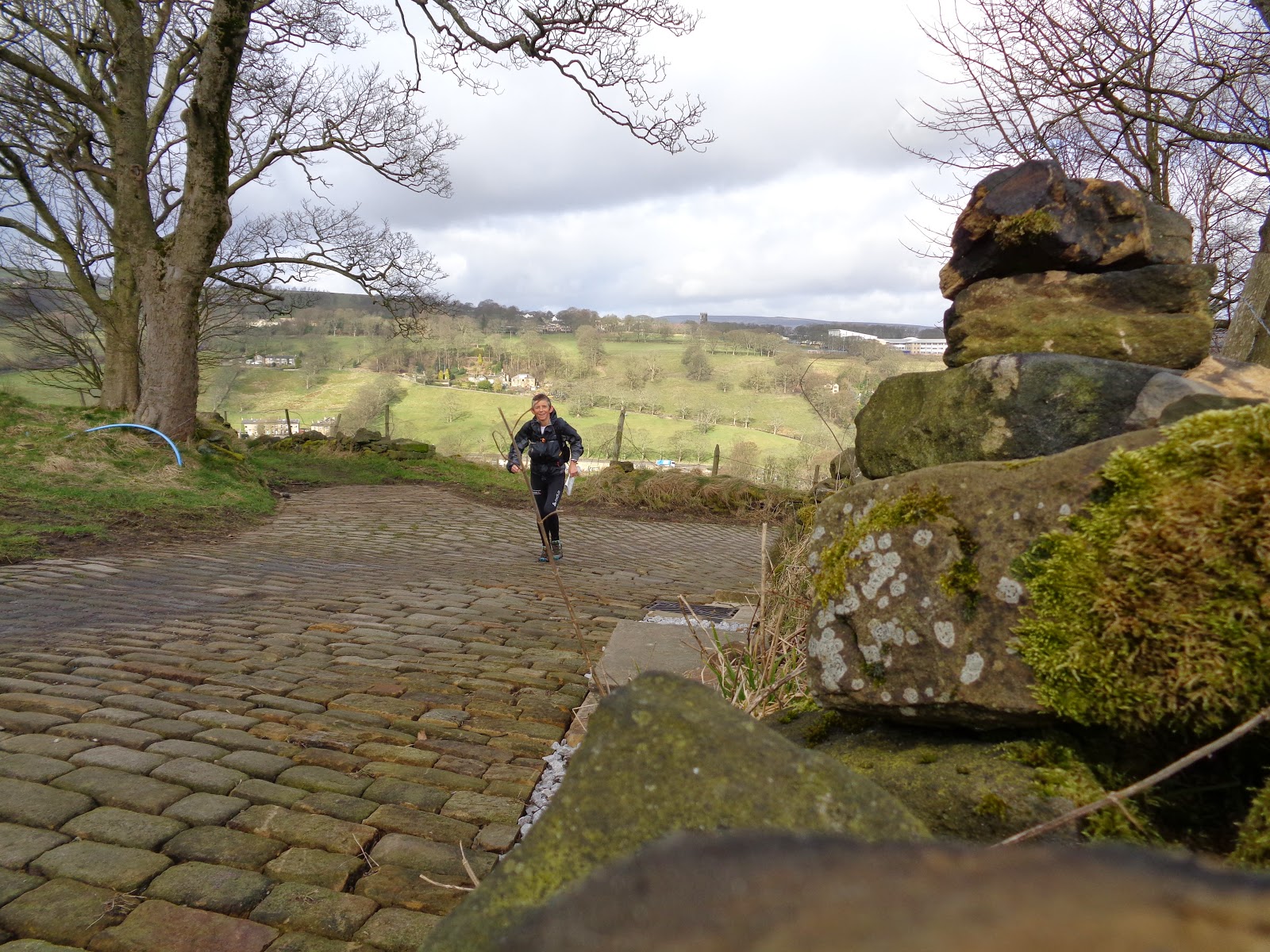 This went up and up to Langley. The early cloud was clearing and it was now getting warm. The next bit was varied with a tiny path in steep woodland, a big farm track and even some tarmac. Andy had receed a 'high' route so I tried dropping lower. I missed the turn onto the dis-used railtrack but found a great path along the river. It was peaceful, pretty and easy running. 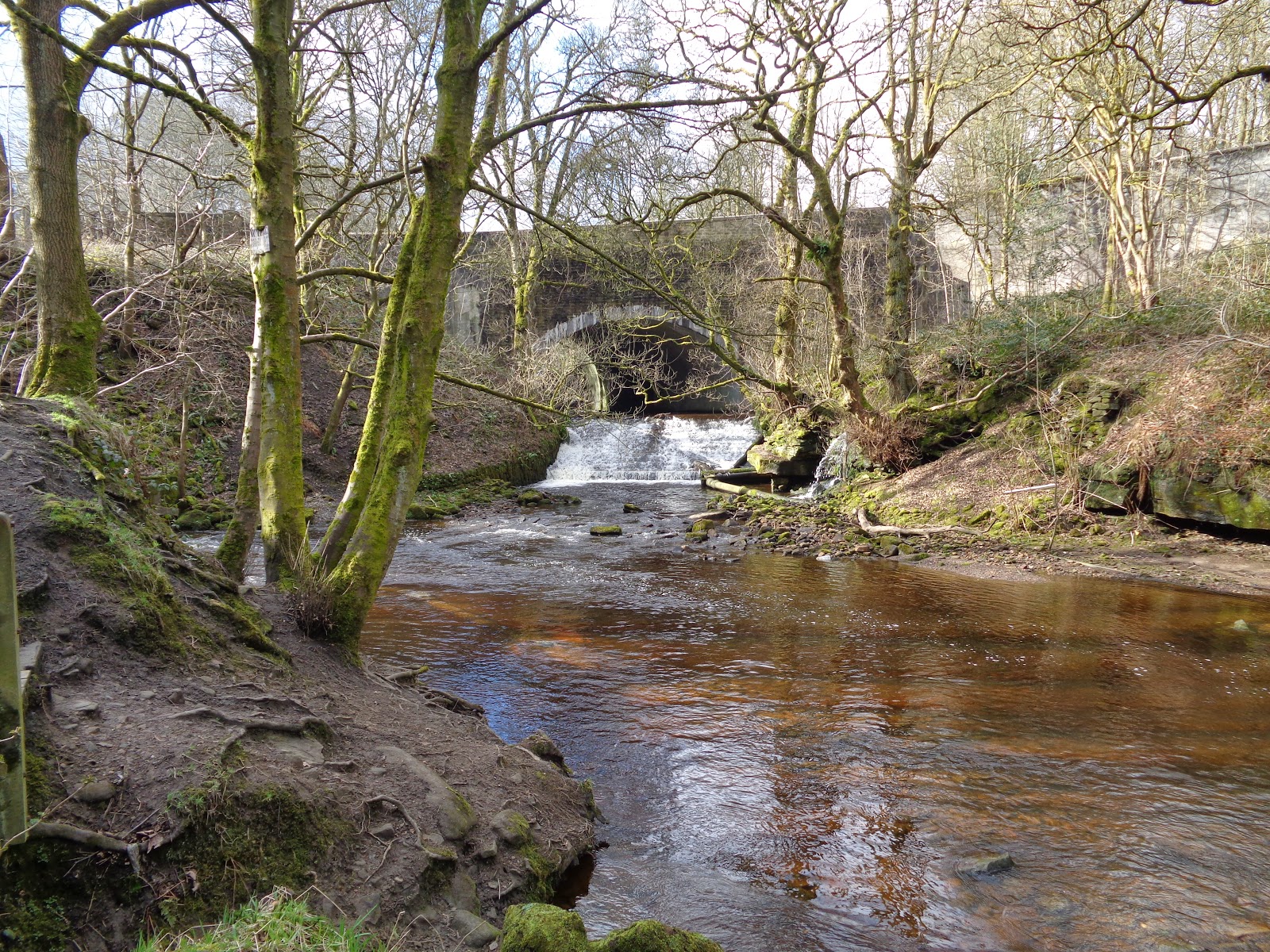 After crossing the main road and ignoring the very tempting sandwhich shop a big easy track led to the first of the reservoirs. I missed a turning shortly after this and so explored a 'new' route. It started well but led me into tussocks and too high onto Dog Hill. Not to worry, I had never been to that trig point before. 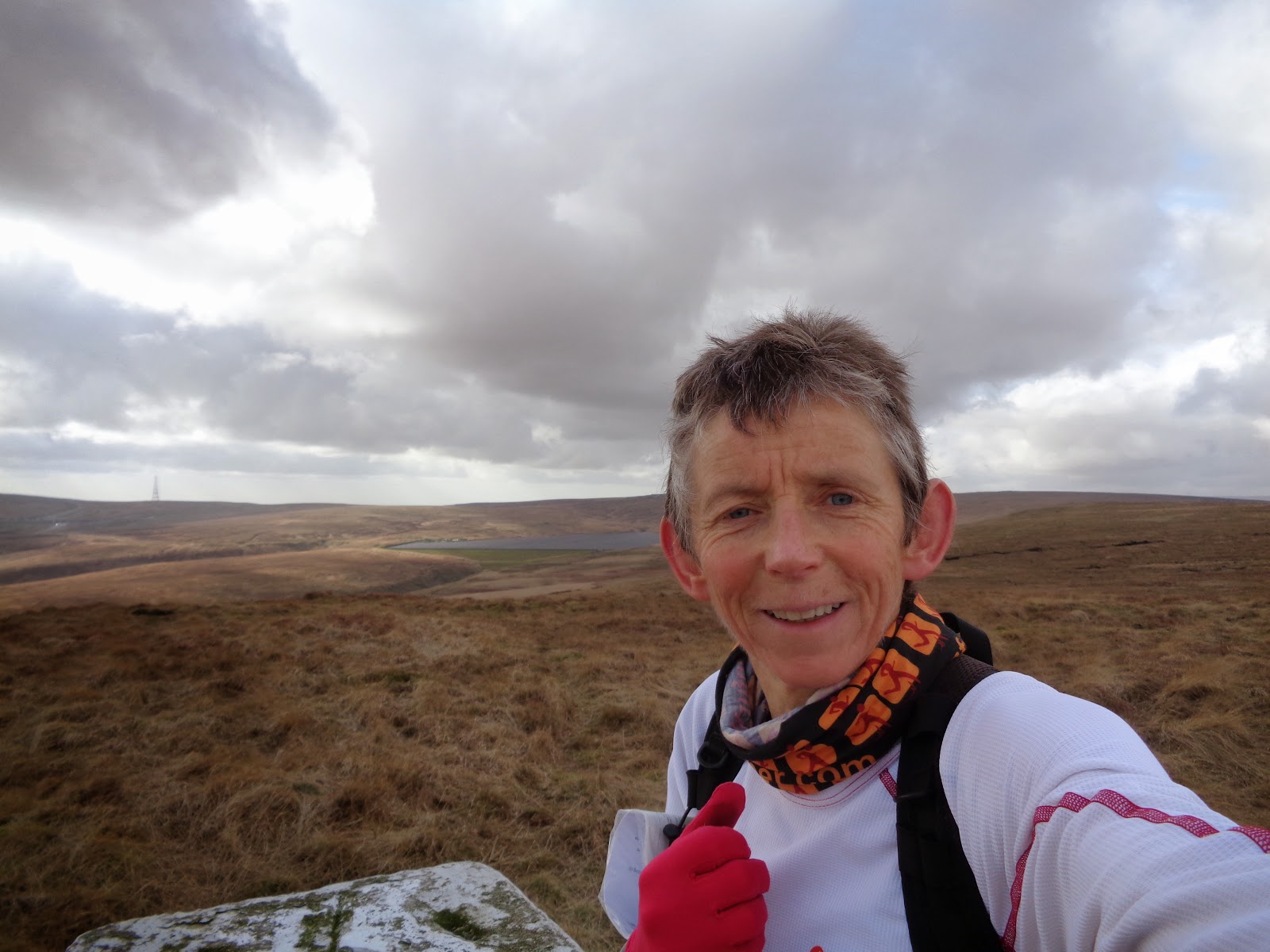 I need to recee a lower route that leads to the permissive path more quickly. The views north were superb but south and quite close was the M62 with a constant prosession of lorries. I skipped a trip to Windy Hill as the out and back looked obvious. The Pennine Way from the M62 footbridge to Blackstone Edge is straight forward but gets more rocky and boggy as you progress. Not great for tired legs. 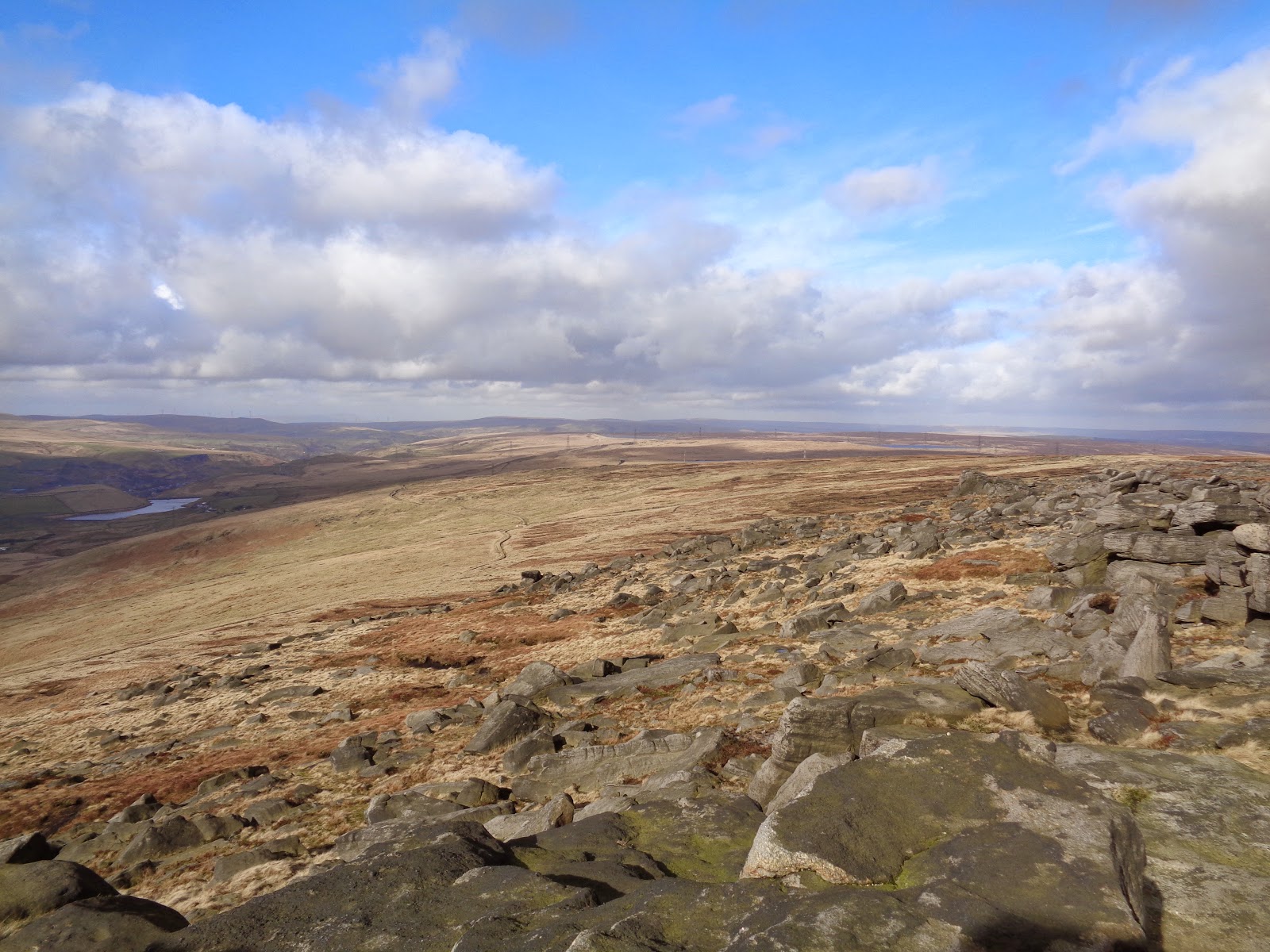 I was tired and stopped for food and to admire the views. 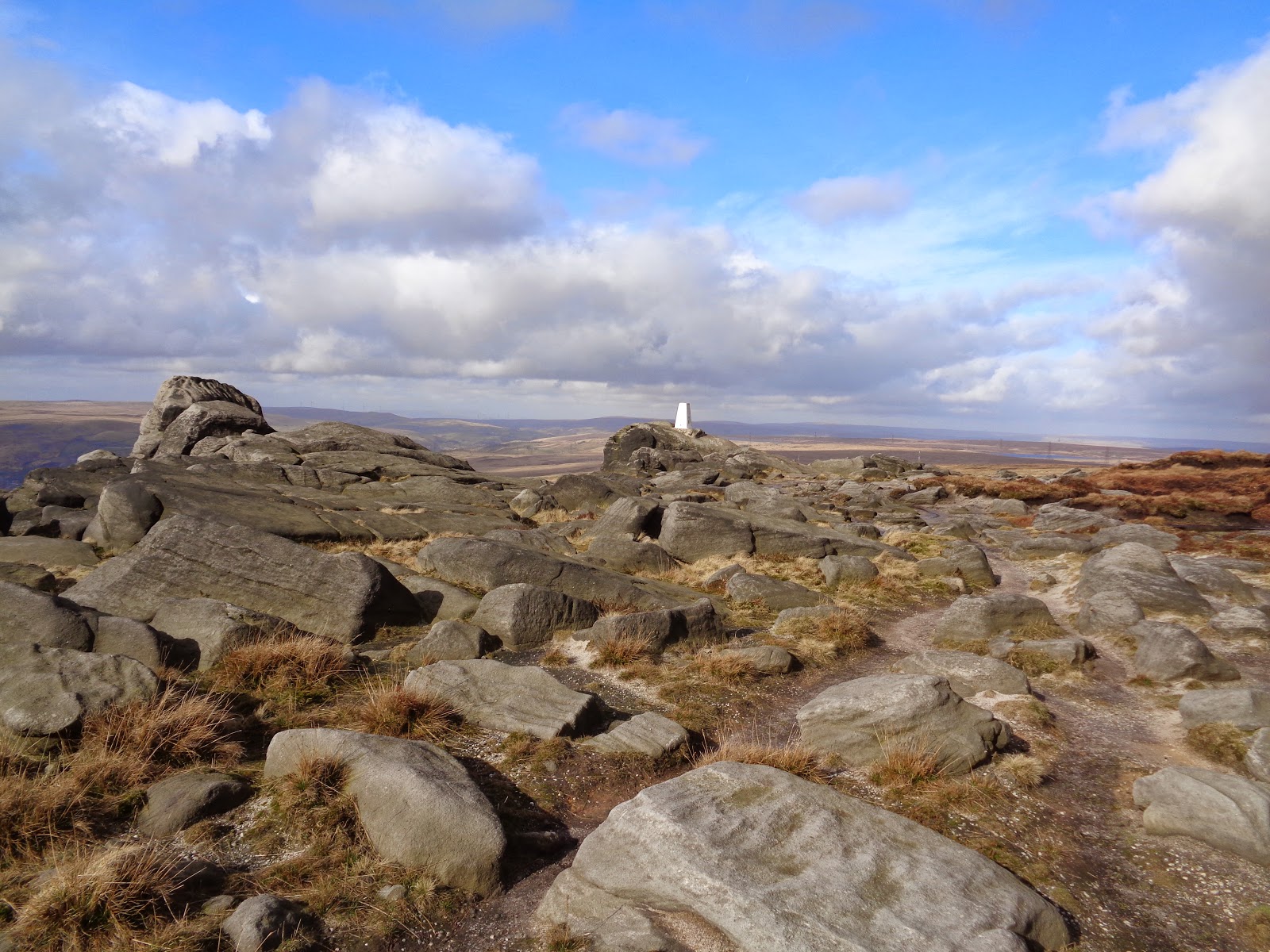 Another trig point and then I was off to the White House. I didn't get the line perfect and lost the path after the Aiggin Stone but it was still quite runnable. 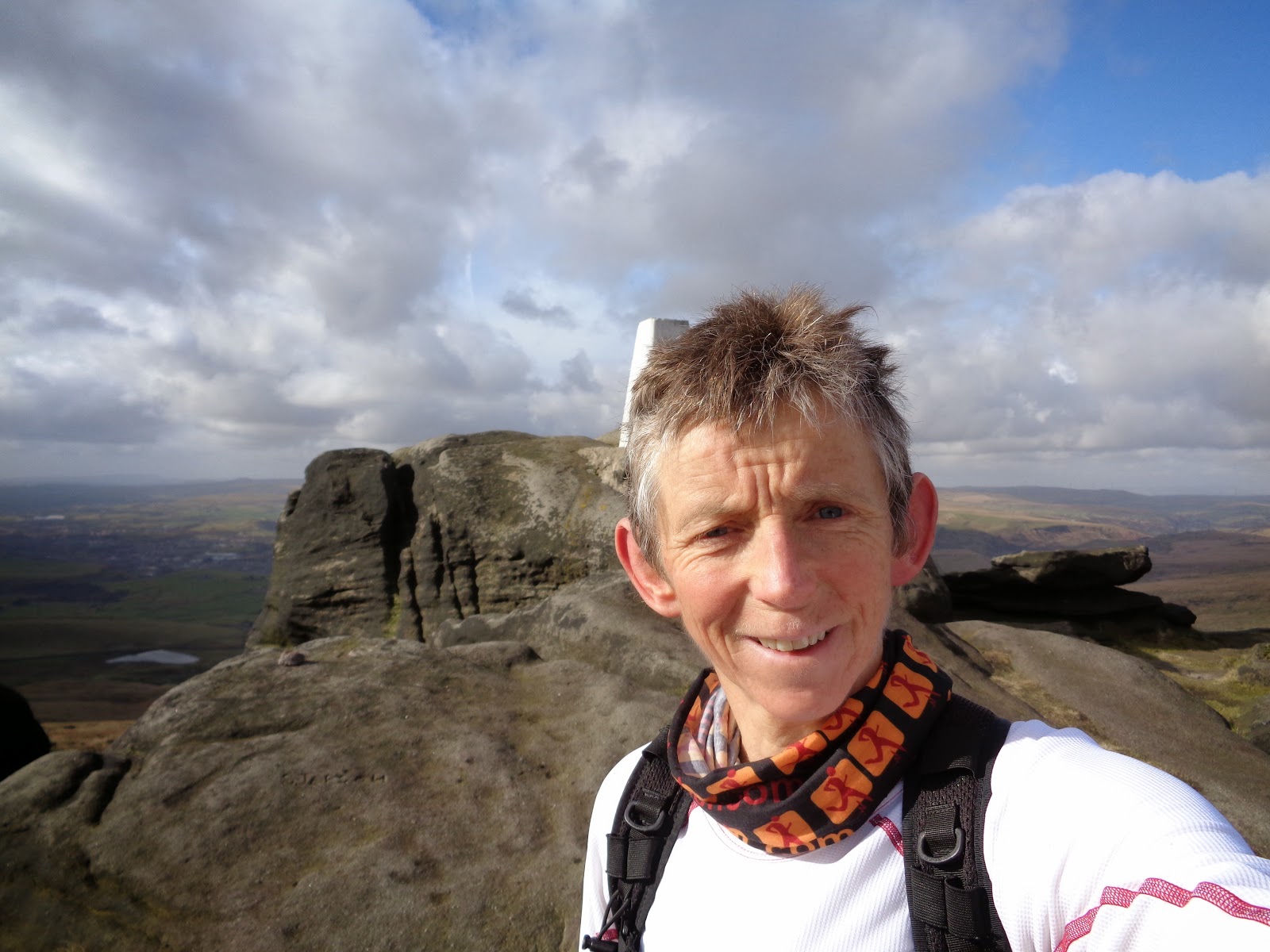 The next bit looked tricky but Andy's description was spot on and as it was donwhill I was soon at Sladen Fold. This was decsion time. 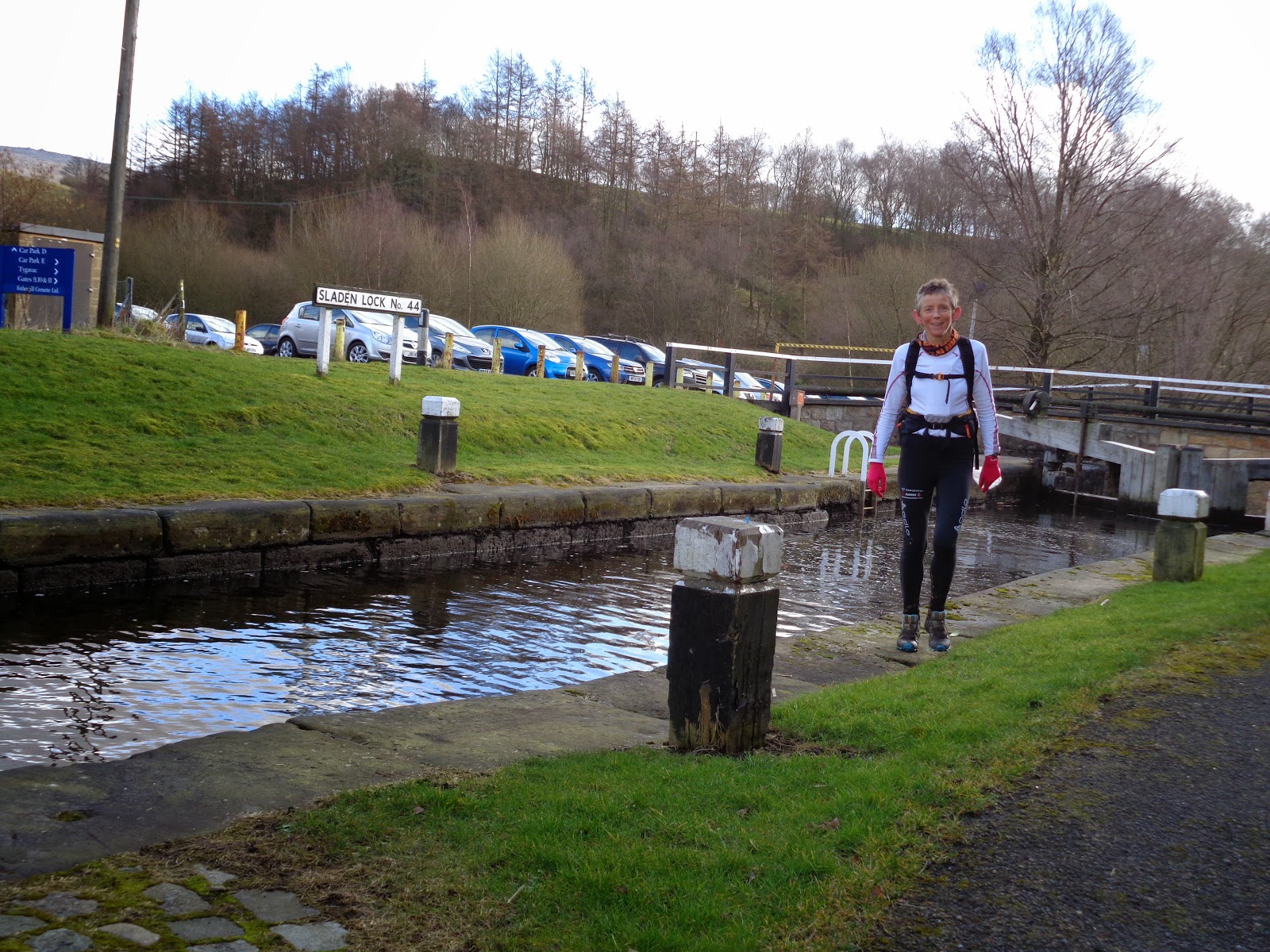 We were due at a birthday party that evening so I could not afford to be late. I decided I had to leave the next sections for another day. It was still a fair way back to the car anyway. I plodded steadily along the canal tow path and then climbed up to the moors and Lumbutts church. This got me back on route and set for an easy run along the old London Road back to Errington Grange and down to the car.
Not a bad day out and although 6 hours plus was slow for 25 miles I had checked the route, noted landmarks and not made my glute any worse. Unfortunately by the time I had driven home my right achilles had joined the body protest. Bugger.
Posted by Ultras and a lttle bit more at 13:49