The real start of the season

The Haworth Hobble has come to mean the start of the season for me. This weekend would be my 8th consecutive year and it is how I started ultras so has a special place in my heart. This year it is again the first of 12 races in the Runfurther series. Maybe it won't end up being one of my discard scores this year? This year would be special because I had persuaded Bob to enter and join in the Runfurther fun. 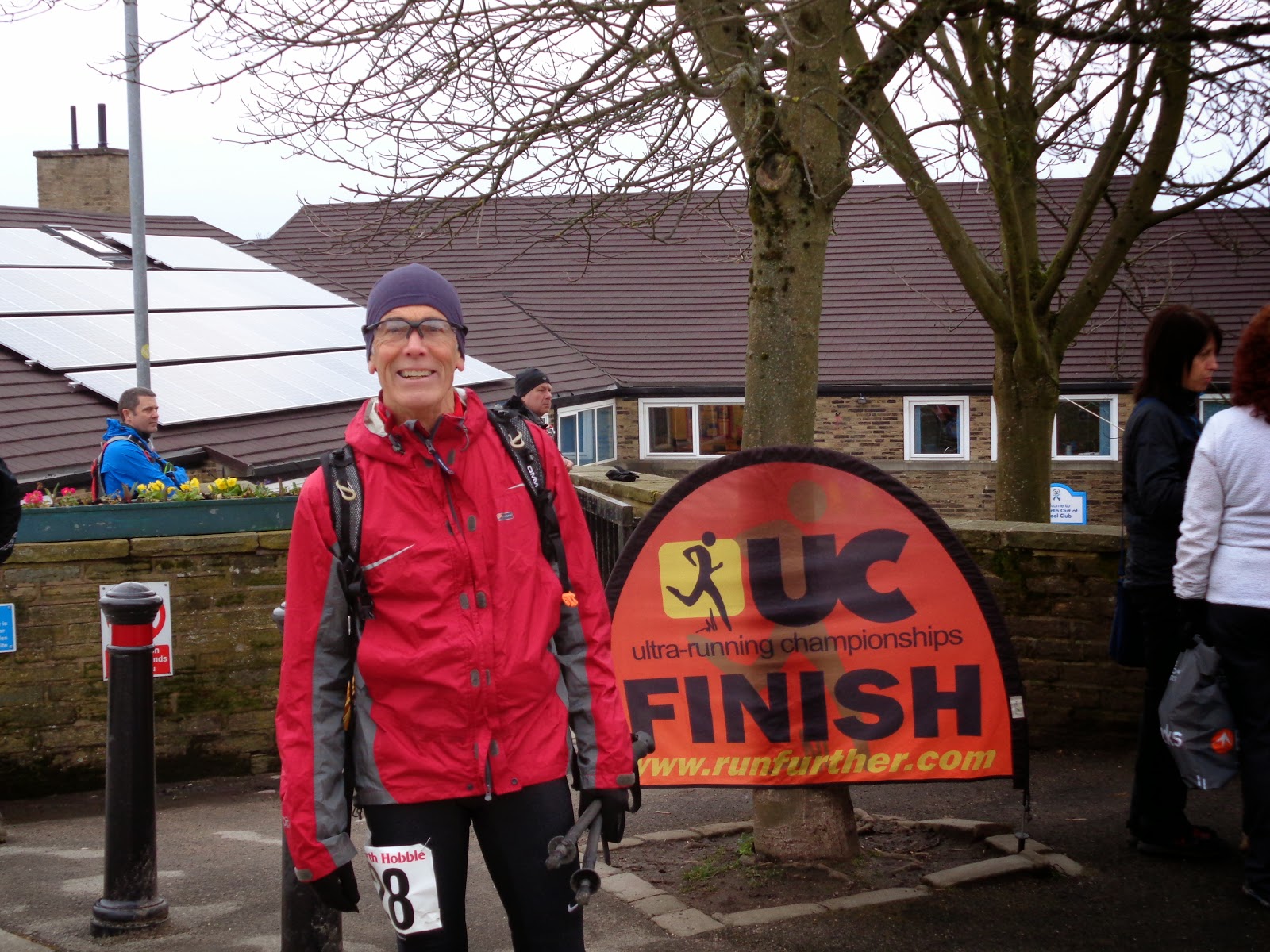 We had been out on recees and he had set his own time limits.
I had pulled something in a glute over a week earlier and was bothered this would be a problem. So much so that I did not race at street O on the Wednesday night and just took myself for a long slow 15 muddy miles instead. We took the van and camped on Penistone again on Friday night allowing us to be at the start bright and early with the flags. 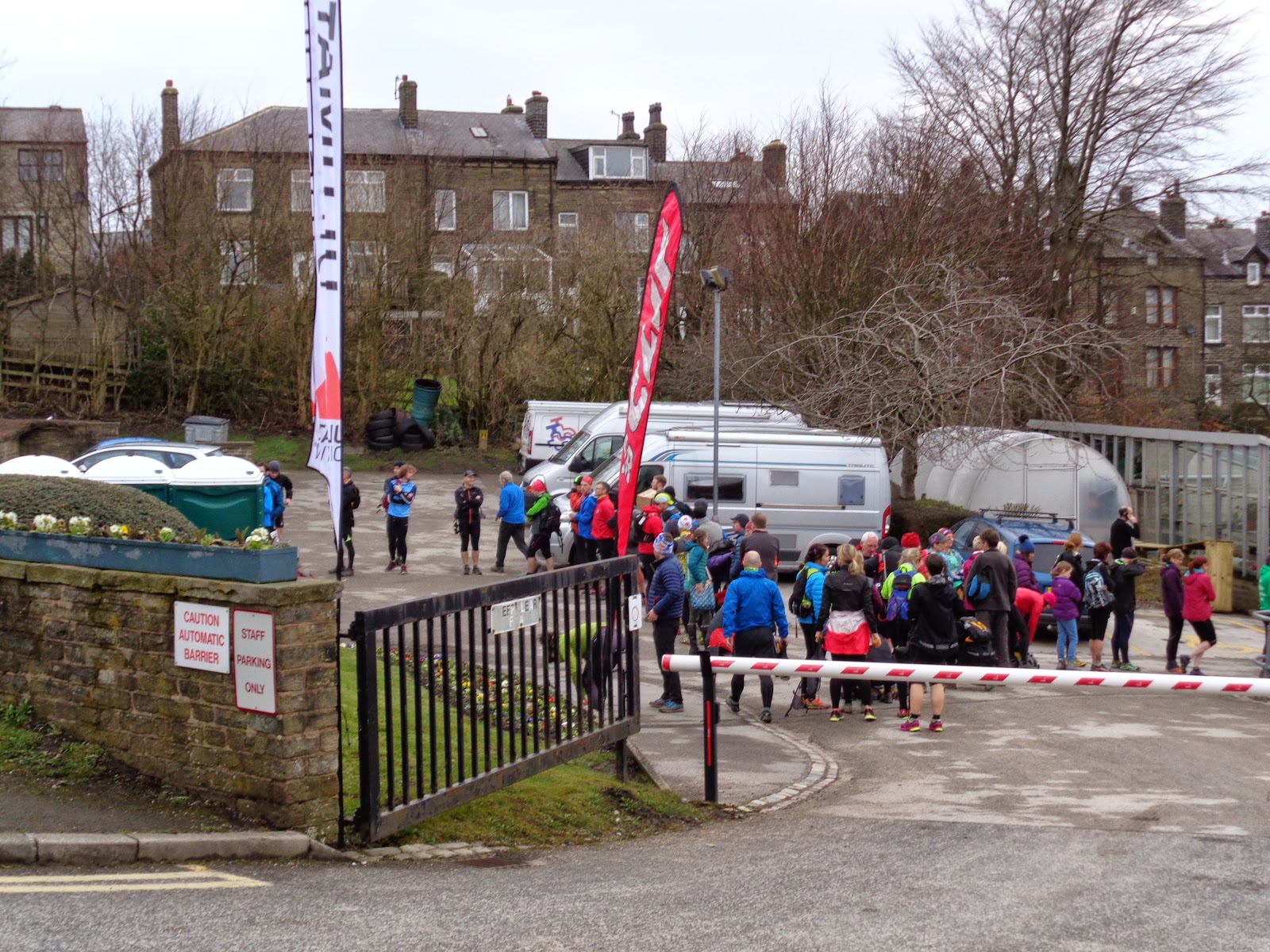 Andy joined us and with help from his club mate Jackie the four of us had the 8 flags and the two new banners up in no time. Thanks to Si at Beta Climbing for the new banners. This left plenty of time to faff with gear and catch up with friends ...Graham, Mick, Linda, and so many more.
I was also able to thank Ian S for setting up our Runfurther Strava club before he zoomed off to the front of the race. I was still nattering as we gathered on the cobbled hill near the Fleece. Runners seemed to be stretched almost up to the church but no worries as surely they will be sent back down the hill. NO, suddenly we were off and I hadn't even heard the race start!

Oh well, I had wanted to start steady and slow. My plan must have worked because unlike some years when mad enthusiasm has taken over I was able to run all the way to Bronte Bridge. A small queue for the gate allowed me time to take my gloves and cag off and stuff them in my sack. It was almost a perfect day for running- warm compared to recent years, very little wind and dry. Timy remnants of snow only. 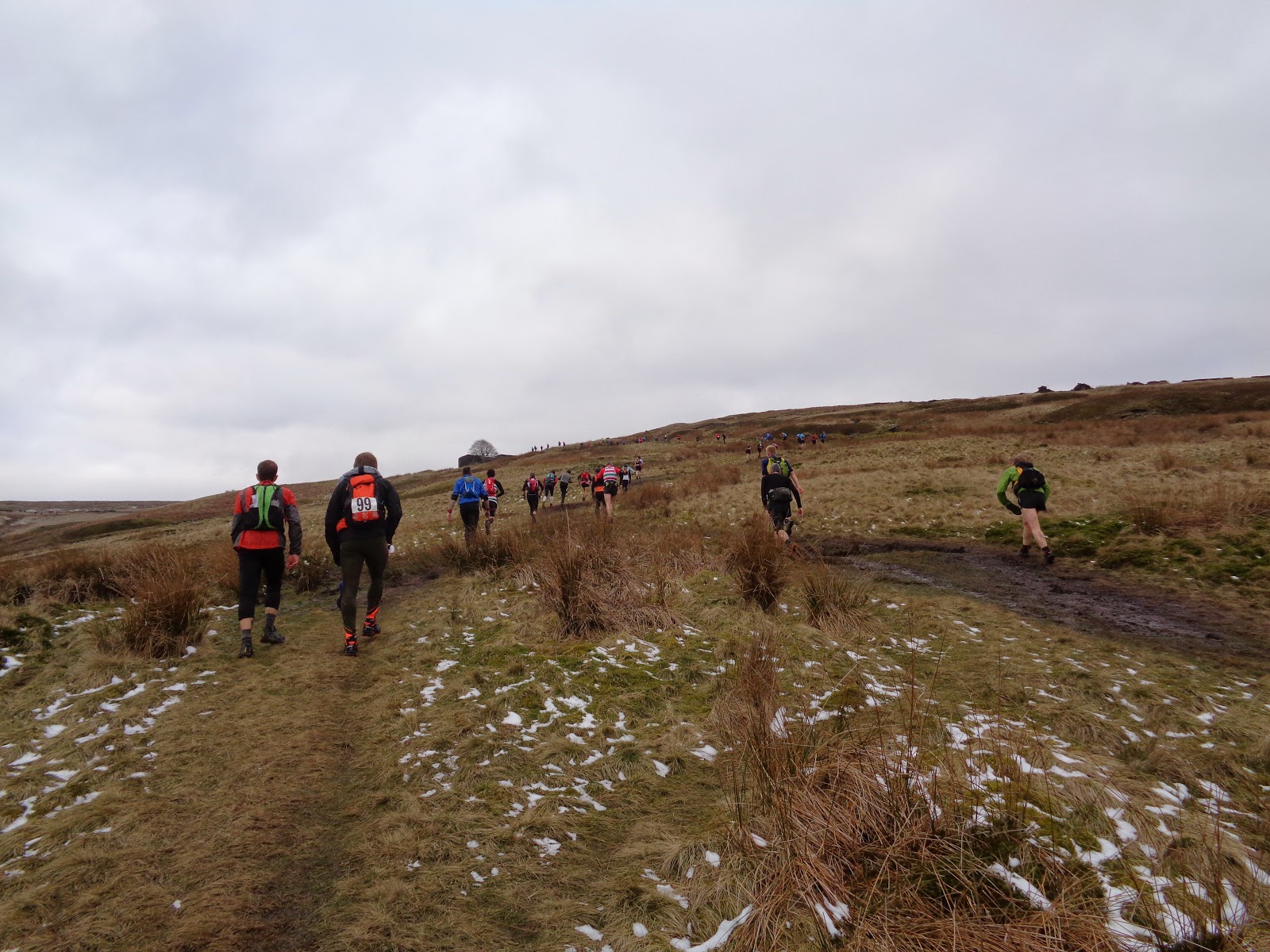 I was happy with my time upto Withins Ruin although a bit worried that I could still see Mary up ahead. I chatted to others on the new (ish) flag stones and then overtook some runners on the descent and the drainage channel. 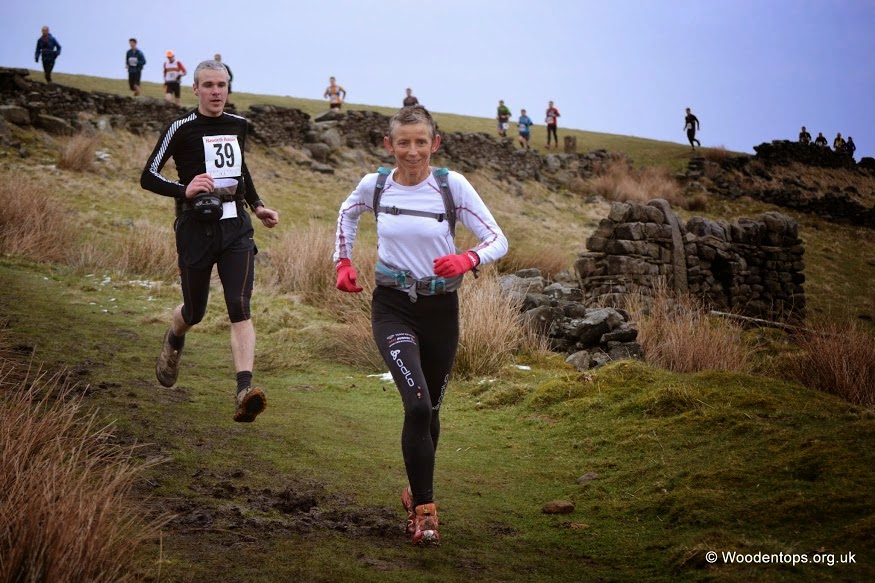 I opted for the road at the dam and it wasn't long before  familiar slap, slap told me Andy had caught me up. Gradually I am learning, so I let him go and carried on at my own pace. I hoped Bob was enjoying his day. 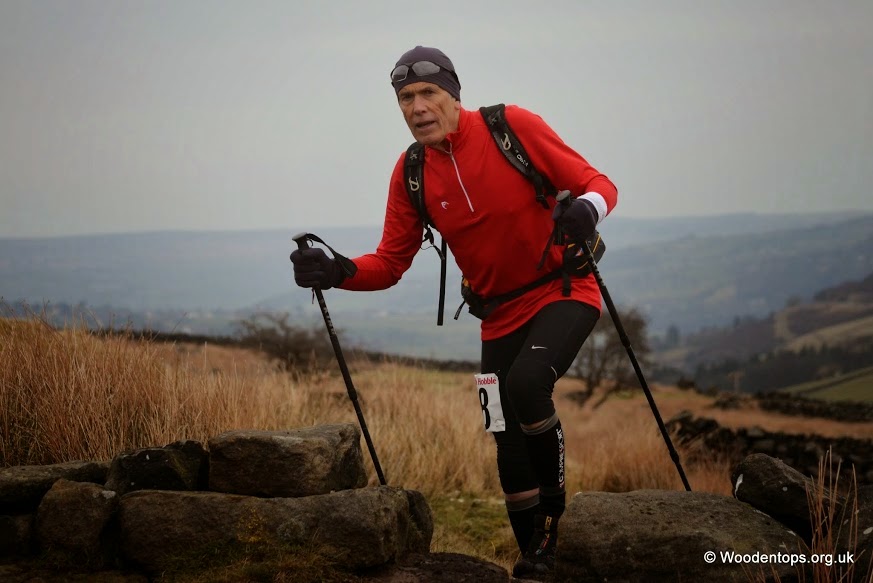 I rushed through the first CP feeling no need for food just yet but did manage a finger of fudge as I climbed onto the moor. The views to Pendle were superb and I enjoyed the easy track. I had been pleased to see Vic M back running the series but she was having stomach issues and keen to know how far to the next CP. Then I caught Graham, also having a bad day. I slowed as we made the final climb to Long Causeway and a small group overtook me. A jammy dounut as I jogged up the road revived me and prepared me for the horrid mud below Stipperden farm. I don't think that bit of path ever dries out. It was here I caught Andy up. 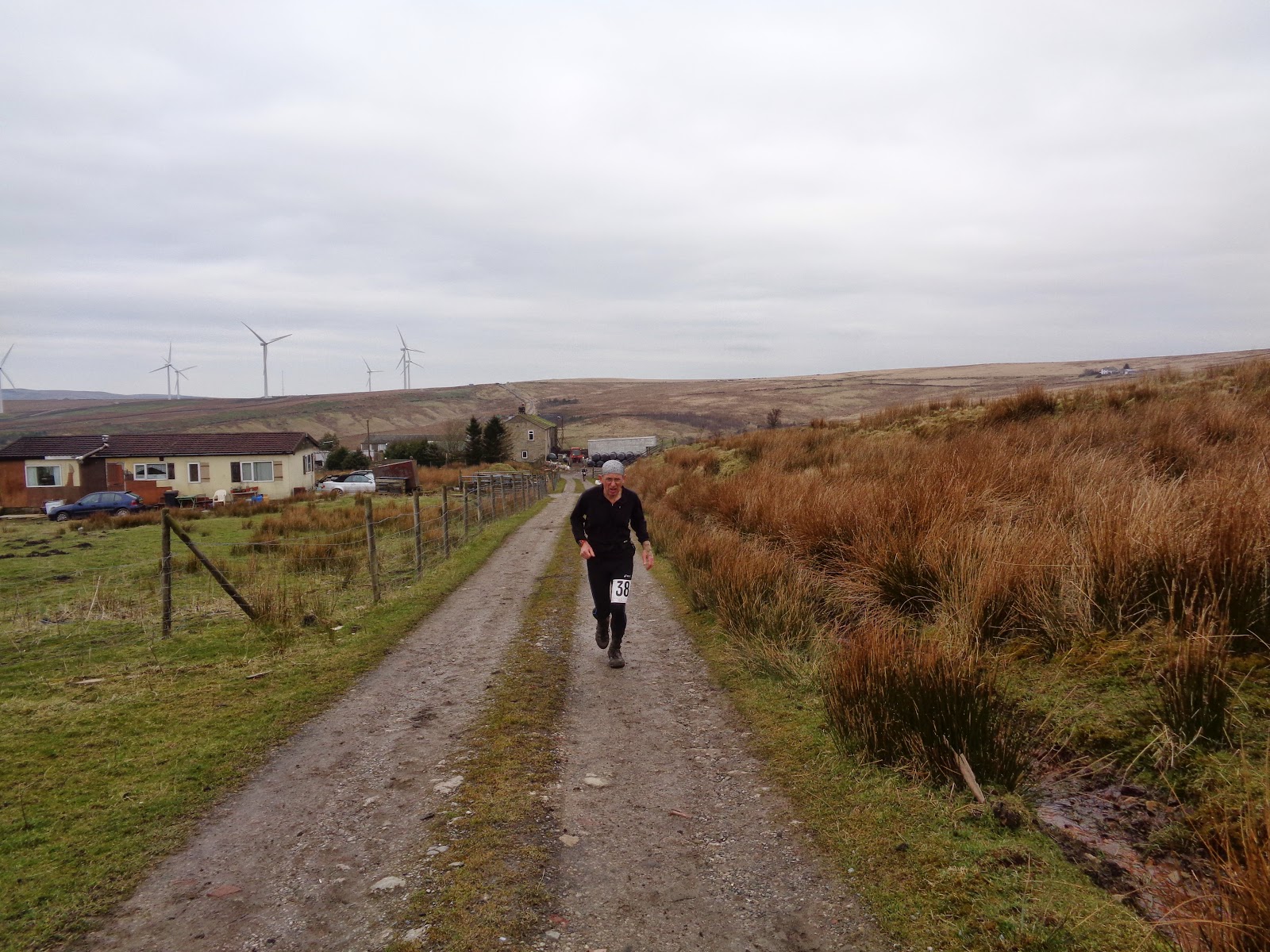 Last weekends excellent time at Trollers was taking it's toll today. I was determined to run my own race but catching people was giving me confidence. The next section was no where near as wet or muddy as I had feared it might be and after no time at all we emerged at the golf course. The sneaky little path by the church always makes me timid but I emerged at the main road in one piece. I didn't use the rough ground short cut and actually overtook 4 runners by taking the slightly longer easy route.  I knew the climb up to Mankinholes would be tough but I stuffed a gel down and drank some chia. Taking part in Joe's nutrition study has taught me I need to eat and drink more plus introduced me to Torq gels which I like. The fields at the to were wet but I was now spurred on by the thought of another dounut. I declined the whisky though. I lost no places going up Stoodley and my legs felt better than usual as we started the big descent.  Supporters were out in Calis woods- thanks Mandy and Charmian. The tarmac descent to Hebden is my least favourite part of the whole race but I tried to smile at Phil aka Capt Krypton. The 'normal' people in Hebden always look at us as if we are freaks and this year was no exception. I ate more on the road upto Heptonstall and was motivated after a chat with Jesse. A sharp stone in my shoes caused me grief on the descent to Horse Bridge but I was reluctant to stop until part way up the next climb I felt I had no choice. At least Salomon laces make it a quick and easy task. I tried to use others to pull me up this climb and although Carol and a small group slowly pulled ahead I did manage to hold my own with most of the others. Leaving the last CP I spotted Helen catching me up. Her knee was giving her some issues but she pushed on with determination to Top O Stair. I gained some yards back on the descent to the final reservoir and suddenly realised I could perhaps get a PB. It gave me just enough motivation to push hard over Penistone even when my Garmin died. 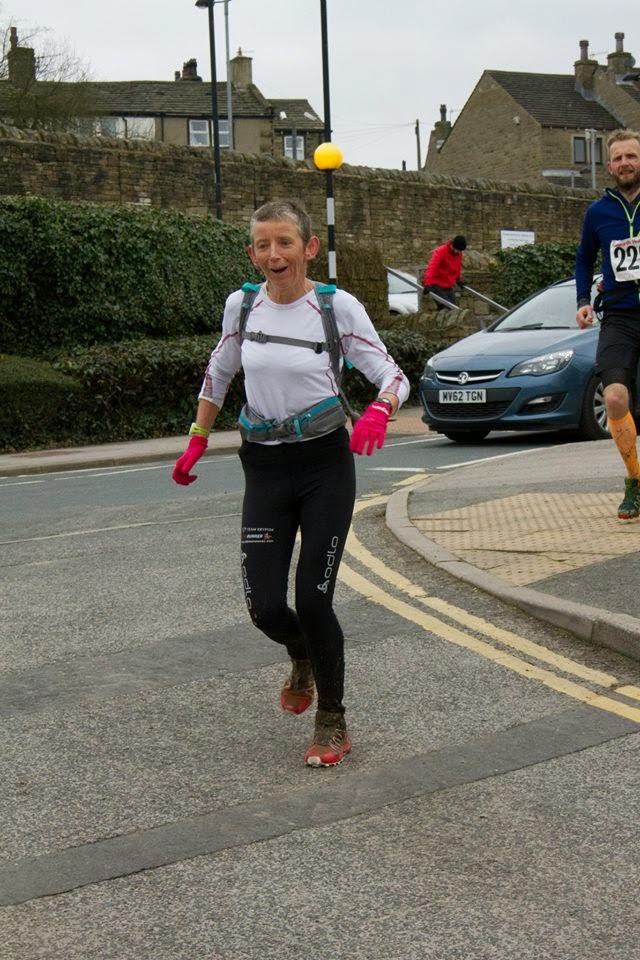 It wasn't enough to catch Helen quite but a sneaky little new to me route after the church let me catch 3 others and fly into the finish. 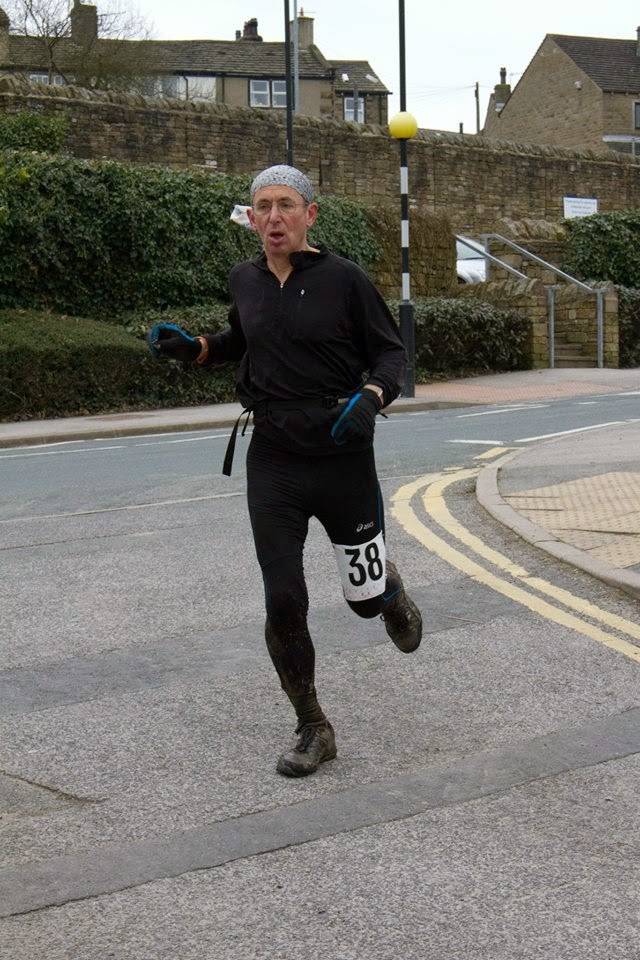 It is possibly the least wasted I have felt at the end of this race which in some ways makes me think I should have run harder but in other ways is pleasing. I did get a PB of 5 hours 28. I still only drank about 300ml but at least I ate a fair bit.My times over the last 8 years have gone from 5,44 at first to a best of 5.30 and a PW of 5,48 last year. It was good to have tea (several cups), pasta and cakes before dashing out to the van to change. I was able to greet friends as they finished instead of sitting in a messy heap like last year and tried to hand out as many Runfurther fliers as I could. Brett had delayed the prize giving til 2pm so we were able to distribute Runfurther prizes and spot prizes from our sponsors. Just as we were leaving for a committee meeting at the pub Bob arrived back. 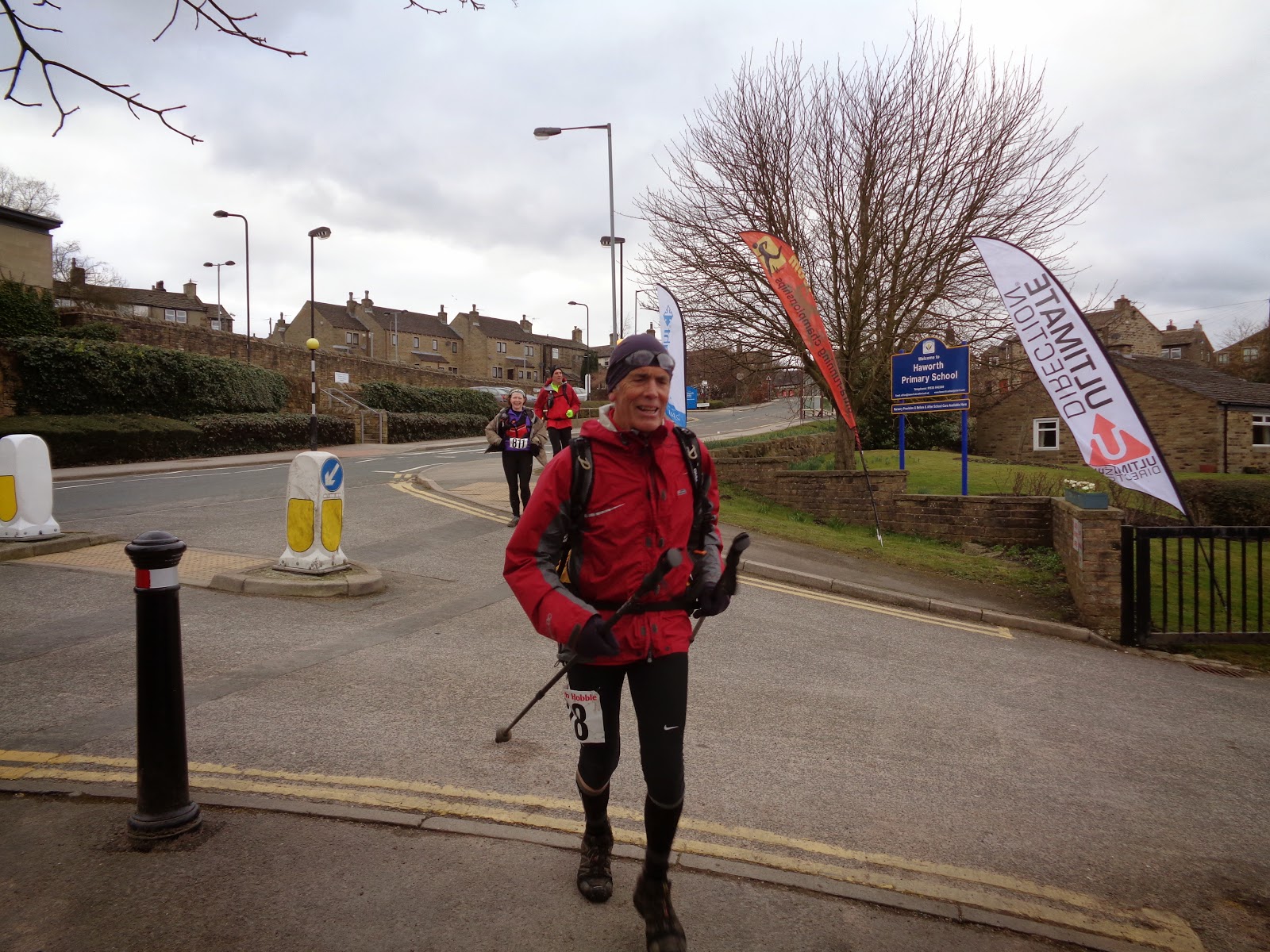 It was great to just manage a photo of him finishing. He was tired but not trashed and although cross to be a minute over 8 hours he was pleased to be well inside his self imposed time limit.  A pint and a meeting later we were back to take down the flags and make our way home before it got too dark. What a great start to the season. 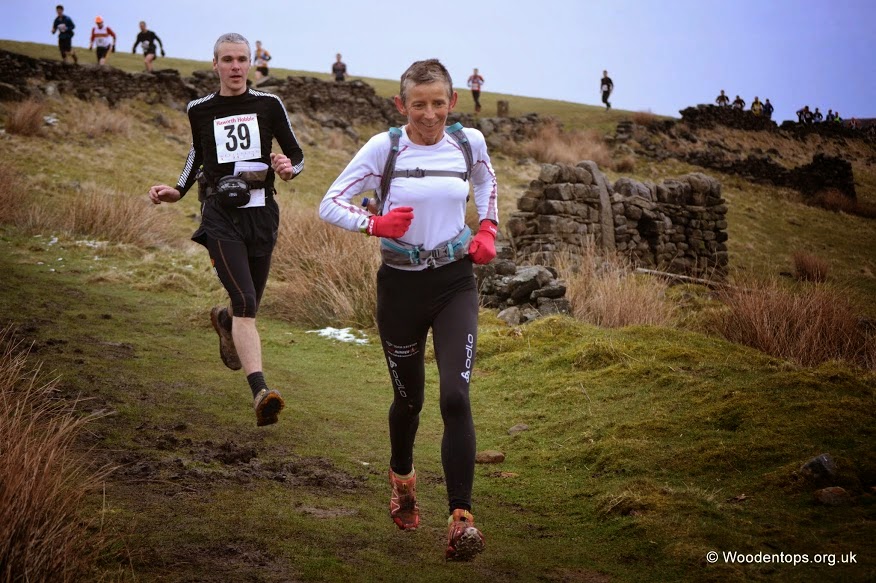