I didn't fancy driving to Northamptonshire, nor running round fields and a stately home so I needed something more local. Wharfedale was full as it was being used as a selection race so it came to be the Yomp. I ran it in 2010 and 2011 but not last year. 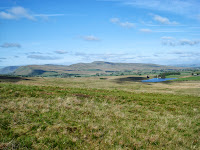 It was nowhere near long enough so I did some extra miles first and still made it to the 8am mini mass start. I had taped my feet and hoped that this would prevent the blisters refilling and stop my toes from bashing. Before we even hit the open fell I was too warm and struggled out of my long sleeve thermal.  It is a lovely route and the views were maginficent. Looking into the Howgills, lakes and 3 Peaks took my mind off climbing Little Fell (don't know who called it that!) and then on to Wild Boar Fell itself. 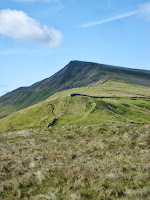 Mostly it was good running on nice grassy paths with just a few boggy bits. I felt good and raced towards Swarth Fell, spurred on by the marshall who had said I was first lady. I hadn't intended racing today. Well, in reality after Friday I didn't think I would be able to. The descent from Swarth Fell to the road is superb and I flew down.. only to hit the track at the other side and find my legs were suddenly dead. In retrospect I should have eaten more earlier but nevermind. Little did I know at the time but I would regret walking the next section. 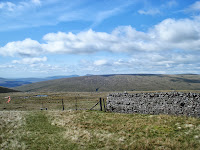 It was chilly on the tops but the sun shone and it was a great day to be out.The climb over the Riggs was slow but once we were above the rock scars I made more of an effort to run again and chased a couple of blokes all the way down to the road. I even caught them and stayed with them as we climbed towards Nine Standards and their company was good as we ran back to town. The descent off Nine Standards starts well enough but the rocky lane was hammering my feet and for once it was a relief to hit the tarmac. 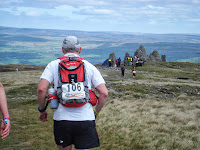 My toes stood up to the steep downhills on the tarmac but I was pleased to see the cut off and enter the park. One last push now over the humpback bridge, up the steps and up the hill to the school. I finished first lady. And it stayed like that for almost 2 hours BUT you can start the Yomp anytime between 8 and 10. Just at the last minute when I thought I was safe a young lady beat me by 3 minutes. I should never have walked up the Riggs. Still, a good day out and far better than I dared hope really. 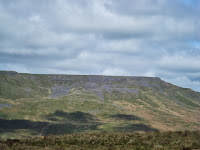 Despite laying in the sun eating and drinking for a couple of hours I still made it back down the M6 before the traffic got bad.
Posted by Ultras and a lttle bit more at 12:11