Mid week I thought this weekend would be a disaster weather wise but after orienteering in the sunshine yesterday the forecast for today was better. After Horby I had a quandary- the road sign said the road was closed. I was keen to get going and did not want a detour. I prayed the workmen were not out on a Sunday and that everyone else would obey the sign. 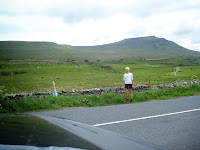 The other half of the road had a big trench where they were laying a new pipe. I made it to the other end without meeting a vehicle.- a bit cheeky but it worked  The weather looked promising as I drove to Ingleton although the tops were cloud covered. My legs objected fiercely at the start but once I was on the steep bit on Ingleborough they got going and I ran at close to race pace except for a few slippy sections.

The grassy slopes were a good start and the boardwalk and flagstones were fine. 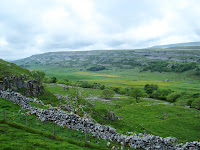 I kept hoping the cloud would burn off or blow away but it was not to be. The summit was in whiteout so I took a quick photo but did not linger. After the initial rocky descent it was fast running on a good track all the way down to Horton.  The muddy bits made the limestone slippy so I backed off the pace a bit through the worst sections. 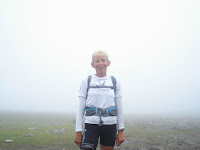 Pen y Gent kept teasing in and out of the cloud as I ran towards it. I met hardly anyone as I swooped down, until just before the village I met walkers coming up the other way. Horton was quiet and I discovered just in time that I had forgotten to pick up my water bottle. Fortunately it was not as hot as last weekend  A few mouthfuls from the tap in the toilets would have to do. As I left the lane and hit the fell path up to Pen Y Gent I could see several sets of walkers ahead. 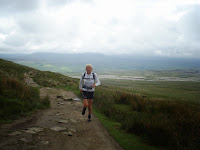 Great - people to pick off and keep me moving fast. I gradually wound each set in and was pleased at how fast I was moving now. On the last section before the rock a little lad was struggling so I let him run and beat me to the gate. Hopefully the victory kept him going to the top. Memories of coaxing the boys up sections of walks they were not keen to complete! 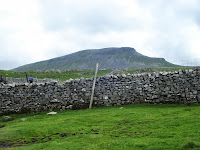 The summit was cloud free but all round it looked like the weather was clagging in so I was off again. I decided to get in some of my extra miles by staying high and going over Plover Hill. What a contrast; the big path disappeared and so did the people. I am not sure I have been over there before and apart from getting very wet feet it was an enjoyable detour. I dropped off the very end and down to Foxup Road which I followed back towards Hull Pot. I hoped to recognise the race route but wasn't sure. I think I turned a little early but I did meet up with the path and the bog. 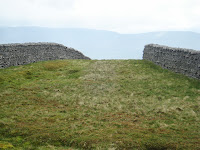 These walls intrigued me- why go to such expense (they were well built with those special sticky out bits not just a pile of loose stones) and have two parallel walls that end in a dead end at the top of Plover Hill?       Having tried to cross the bogs and sinking upto my knees I back tracked and found a narrow bit. A jump looked like a good idea. Sadly what looked solid wasn't and with all my weight on one landing leg I sank in to the top of my thigh. 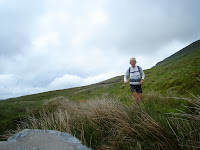 I escaped after a few minutes, unscathed and with both shoes, but very muddy. The weather here took a turn for the worse and Ieven had to put my cag on for a bit. On on and soon I was on a decent path heading for Birkwith. It was still quiet  except for the birds (no idea what they were but they were noisy). Fortunately I found a stream to wash all the bog off before I met any walkers. I wasn't looking forward to the road section but it passed quickly and I did get a cup of tea at the layby. 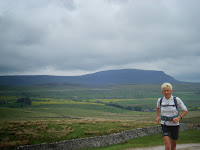 At the viaduct came the last big climb and I opted to get my extra miles by staying on the path all the wa y to Grain Head and approaching Whernside from the north. Years ago I remember mountain biking over that fell  but I do not think I have climbed Whernside from there. The sun was out again, well some of the time, and the rain did not come to anything. It was an enjoyable trot along the top and  back down to the Hill Inn.
Another one done- approx 29 miles and faster than I had dared to hope at the start. I did not push my luck and risk the closed road on the return and went via Bentham etc instead.
Posted by Ultras and a lttle bit more at 12:37