I only decided to do this with a few days notice. Was it full? No, just send your cheque. The original plan was to go up on Friday evening in the van with Bob. Then we realised Matt was due home from holiday... then that got even more complicated as he was arriving home early Saturday and needing tlc. I put a mental deadline of 8am and 7.45 he walked through the door. Bob said he would stay and for me to go.

All a mad rush but suddenly I was driving up the M6 and trying to decide how to get my extra miles in. A quick wee stop in Whinlatter allowed me to do nearly 2 miles and then I thought I ought to find Loweswater as I had never been before. I was registered by 10 so I had an hour to get another 4 miles in. Off I went exploring. 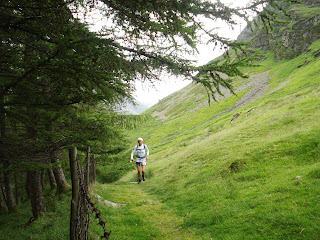 The peaks looked big and steep- somehow the ultras though long and sometimes with a big total ascent never look so serious. It also looked as if the forecast of gales and rain might come true so after my extra loop I abandoned my camera at the car. Shame because in the end I was going slow for much of the day and could have got some lovely shots. 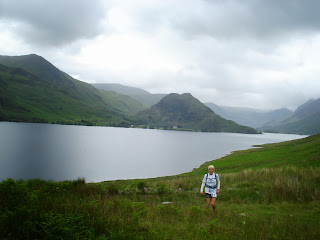 Before 11 we were congregated in the lane with Helene and Wendy whispering about secret paths and others chatting about the route and weather forecast. The start ws fast down the lane and over the river. By the woods people were shedding layers and the climb up Whiteside was warm. I had not planned to race, more just to have a good day out, but........ 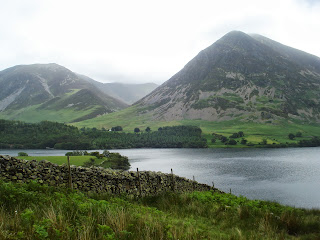 Speed was to be my downfall quite literally. On the greasy rocks on the spine towards Hopegill Head my legs suddenly shot away and I decked it. The cuts on my face and knee looked a mess but my ribs took the brunt of the fall and it was a few minutes before I could move or answer the many people who were asking if I was OK. Not a good start and still many miles to go. 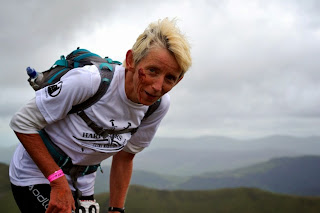 The marshall from the next CP walked back to meet me and cleaned me enough for us to decide I would probably be OK. The flat and up was OK but running down jarred badly and on the rocky bits I had lost confidence in my shoes keeping me upright. I tried to keep an eye on the guys around me and aimed to beat them on the ups and not get too far behind on the downs. Mark S was sat on Whiteless Pike offering water, food and encouragement. I'd said I would see how I felt at Newlands but knew if I could get there I would aim for Honister then if I could get there I might as well keep going. Pat B pulled ahead as we contoured below Robinson but Chris and Edwin were always just in front or just behind. I could also see a small pack of ladies a few hundred meters ahead. For me the decsent of Dale Head was the hardest part of the day. I so wanted to run and just couldn't. The guys coming the other way on the 10 Lakeland Peaks gave me some odd looks. The cups of water at Honister were very welcome and it was good to see friends like Helen and then Andy and Sarah coming the other way. I was determined to stick to Edwin and Chris caught us on every downhill. We picked up the fence line below Haystacks fine but the climbs up Seat and then High Stile and Red Pike were tough. It was a relief to have a grassy descent and to try to run down towards Scale Force. Edwin went up and over but I couldn't fave the deep heather. I follwed Chris down the side of the stream and then cut across. There wasn't much in it and by Mellbreak we were together again. Although the descent here was steep the bracken was still young and the ground was fairly even. I went as fast as I dared thinking faster meant it would be over quicker. Chris beat me to the bottom so I tried to hang on as we ran along the bridleway and back to the village. The early finishers were in the pub garden giving support but the uphill on tarmac after the pub reduced me to a hobble.
The race team were fantastic. Andy brought me my splits, a lady tried to clean and dress my face and another brough me cups of water. Suddenly stopping I felt a bit wobbly. The food spread inside was amazing but it took me an effort to eat my stew. It had taken longer than I hoped as I had thought 6 hours might be possible but in the end I was pleased with 6.42 and just to get round. I was very very pleased I had done the extra miles first as I was in no state to do them now. 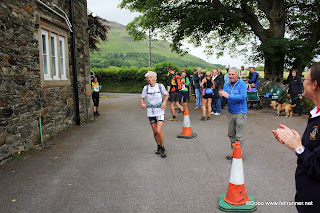 It would have been easy to loiter and eat cake but I was chilly and keen to know how Matt was so I hobbled back to the car, made a quick phone call and set off home. Battered and bruised but it could have been worse. Just hope I mend fast as I have plans for the next few weeks!