I had thought about the GCW again- anti-clockwise this time. But doing it with tired legs, on my own and on a very hot day was probably not a great idea. Then Bob said he would like to join me so we worked out a plan that would give us both 8 or so hours out. By the time we parked at Elterwater it was already warm and sunny. 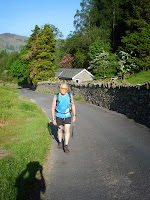 We set out up the fell road and on to Silver Howe, a fairly steep start. These slopes are grassy and runable, once you are on the ridge. It was a little hazy but the views were great and I saw nobody close enough to speak to- just one lone walker coming the other way. I was using my old SLMM map as it 1:25,000 all on one sheet and it brought back some happy memories. After Blea Rigg I had a route choice - down to Stickle Tarn and then a big climb or up over Sergeant man. In the end I did neither and contoured into Bright Beck before climbing up to Thunacar Knott, retracing a route we had used on the SLMM. By now it was definately hot and sunny. 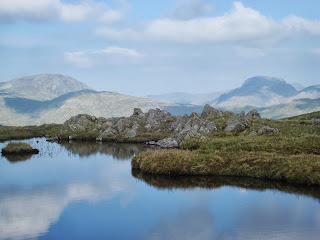 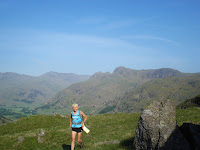 I spotted two other runners in the distance near Pike of Stickle but still nobody close enough to talk to. I took a straight line to Stake Pass which got me wet feet but was easy running on only slightly tufty grass. As I dropped into Langsrath it got warmer still. They have 'made' a swooping little path for mountain bikers on this bridleway (at least I assume that is what it is). 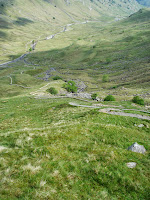 Tony and I used it to climb up last September but running down was easier and more direct on the grass. At Tray Dub I decided to investigate the path on the west of the river. Until I diverted onto a grassy quad bike track it was rockier than I had hoped so I will stick to the other side next time. By Black Moss I came across my first people of the the day wild camped just above the bridge. There was now also a steady stream of people walking up from Borrowdale and the camp site was busy. I made good time through Stonethwaite and round to the YHA. I collected more water as I left the valley and prepared for the big climb to Glaramara. Fortunately there were quiet a few people walking up and I gradually picked them off as I had a bite to eat. 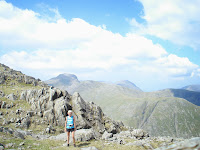 I was soon past Chapel Crag and on Galaramara itself. As I dropped to High House Tarn I passed my first walker coming the other way. The views by now were superb and I stopped a few times to saok them in. I skirted Allen Crags and dropped to a very busy Angle Tarn before climbing to Esk Hause. I was keen to make sure I got in at least 30 miles, and seemed to have time on my side, so I made a snap decision to add in Scafell Pike as an out and back. It was a very hurried out and back as the path was busy and the summit was heaving! Not a place to linger. 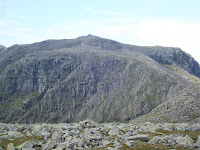 I skirted Esk Pike and wondered how far ahead Bob was. He had gone direct from Stake Pass to Angle Tarn.  I spent a good ten minutes mis-remembering which lump was Gerry Charnley Cairn but found it once I had realised I was still too high. I hoped he had found it with less trouble. Then it was a little trod across to Ore Gap and up onto Bowfell. This bit was new as on the full GCW we dropped from Three Tarns into Eskdale and then later from GC Cairn to Angle Tarn and Borrowdale. 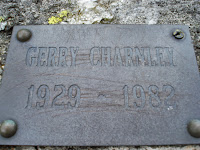 The bit that seemed to take for ever was Crinkle Crags and I still hadn't caught Bob. I had more to eat and pressed on. I had run out of water again. Once off the Crinkles the path and grass were more level and I raced across to Red Tarn and got more water before I started climbing Pike of Blisco. Bob texted to say he was descending off the other side. I passed Tessa Hill running up and kept an eye out for Bob. I spotted him taking the race route line north of Blake Rigg. It took a while to catch him. 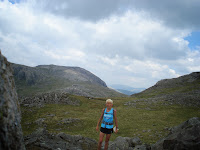 We ran together for bit but do not run at the same pace. At the broken wall and fence we parted. I then pushed on to Blea Tarn and the last big climb onto Lingmoor Fell. This was the final bit of the Langdale SLMM so I knew the way. Unfortunately Bob didn't and I later wished I had stayed with him. I eventually hit the top and ran past the old mine workings, down to the funny green gate with the metal foot plates and over into Langdale. 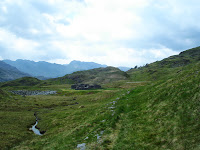 It was pleasant to enter the wood which were cool and full of bluebells. I realised I was starving and found more food. At the junction in Sawley Wood I made a nav error and dropped to the big quarry. It was further than the easterly route but still brought me into Elterwater. 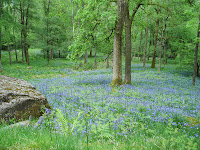 I arrived to find the ice cream man had just sold his last ice cream so consoled myself with a bitter shandy from the pub instead. I lay in the sun waiting for Bob.  I wandered back to the car to change out of wet socks and hoped to meet him at the pub to buy him a treat. After an hour I worried that he had gone another way and was back at the car waiting. Typical- in the few minutes it took to return to the car he passed the pub and met me on the road. His last mile or so had been tricky to navigate and he was tired. Still a long day in glorious weather for us both. Not sure of the exact distance but certainly over 30 miles. 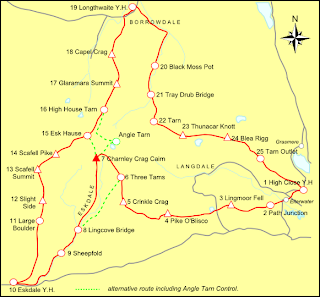